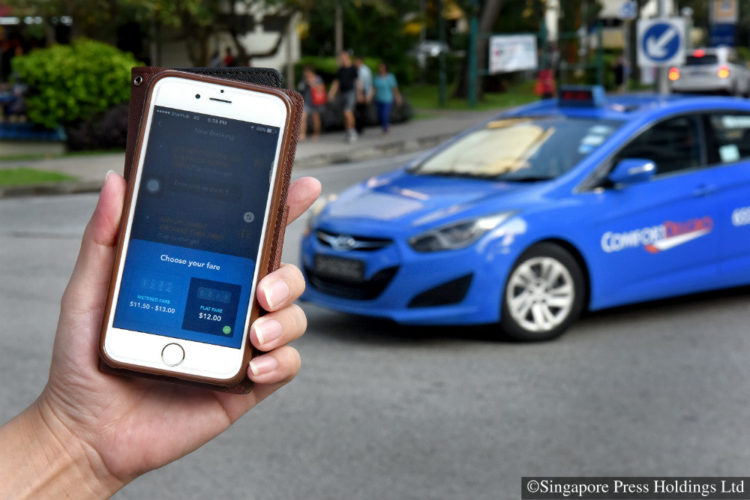 Just last month, ComfortDelGro asked its cabbies to snap photos of private-hire drivers who pull up at taxi stands so that enforcement action could be taken against them.

It was the most visible attack the taxi giant had launched against the likes of Uber and Grab – a move preceded by persistent behind-the-scenes lobbying for the Government to step in and do something about the newcomers.

But in a surprise announcement on Tuesday after the market closed, listed ComfortDelGro said it was in talks with Uber to form an alliance.

Why is ComfortDelGro considering sleeping with the enemy? Asked this, a senior executive said: “In business, there are no enemies.”

Indeed, there have been stranger bedfellows in the corporate world. Even in war, both sides will call for a truce if they see no end to the bloodletting. In the case of taxis versus private-hire players, too much blood – in the form of diminished profitability or outright losses – has already been spilt.

Cabbies who are either unhappy with taxi firms or who are attracted to the idea of driving a private car have been defecting to Uber and Grab since 2013.

As a result, taxi companies have seen their hired-out rates sliding since 2013, the year Uber and Grab arrived. Close to 10 percent of taxis are unhired today, up from an average of 3 percent previously. Each idle cab costs an operator close to $40,000 per year in lost rental.

At its height, the industry had more than 28,000 taxis here. A 10 percent idle rate would have translated into more than $110 million in lost revenue per year – or $330 million over three years.

It is no wonder that cab companies have shrunk their fleet size. Today, there are around 25,700 cabs on the road – 9.4 percent fewer than in 2012. For a trade that has been growing its fleet almost continually from the 1950s, this is damning evidence of decline.

For further evidence, look at ComfortDelGro’s share price, which has fallen to its lowest since mid-2014. Its closing price yesterday, a day after the surprise news, was $2.36, a long way from its peak of $3.21 in June 2015.

The company has come up with various ways to counter the private-hire onslaught, but to no avail. In hindsight, it might have done too little, too late. So waving the white flag and calling for talks is the only sensible thing to do if it does not want to see its bottom line receding further.

UBER’S CONSIDERATIONS
On Uber’s side, an alliance with Singapore’s largest taxi operator makes sense too. Its main ride-hailing rival, Grab, has managed to convince all other cab companies to use its app, giving the Malaysian start-up a clear edge.

If the talks go well, it will probably be Uber’s first such alliance with a taxi company in the world.

But the San Francisco-based company is no stranger to trying new things. Owning a fleet of cars here – close to 15,000 under Lion City Rental – was also a first for the firm. Before it set up Lion City Rental in 2015, it was an asset-light technology company.

Depending on how its alliance talks with ComfortDelGro pans out, it might well evolve into a full-fledged taxi operator.

And why not, if its current operating model is not yielding results?

Since its formation five years ago, Uber has been chalking up billions upon billions of losses. Its previous chief executive officer, Mr Travis Kalanick, stepped down in June, ostensibly over internal scandals. But it would not be surprising if his departure was also a sign that investors were losing patience.

Uber’s decision to sit down with ComfortDelGro is also a sign that its previous all-out guerilla warfare strategy is not working. While it and its private-hire compatriots have dealt heavy blows to the taxi incumbents, they themselves are casualties of their own success.

As at June 30, there were 63,259 private-hire cars here – more than four times the population in 2012. Of these, 43,385 were chauffeured private-hire cars, with Uber and Grab accounting for the bulk. In just four years, the industry has overtaken taxis in numbers by nearly two times.

But as a consequence of this unbridled expansion, the private-hire sector’s idle rate is at least as high as the taxi industry’s. Uber has indicated that 10 percent of its cars are not hired out. Like taxis, a 10 percent idle rate is not a commercially viable state of affairs, given the foregone rental revenue and the high cost of cars here.

So, Uber has to look for alternatives – just as Grab has done so with its talks to acquire SMRT’s taxi fleet several weeks ago (talks which have since stalled).

OPTIONS FOR ALLIANCE
What will a ComfortDelGro-Uber alliance mean, should it take off?

Common booking app
Well, commuters will hopefully be able to access 15,500 of ComfortDelGro’s cabs on Uber’s app. They will be able to enjoy the functionality of an app which ComfortDelGro customers do not enjoy today – such as seeing the nearest cab available, tracking its arrival in real time and rating its driver.

This functionality seems important to commuters, especially younger ones, even if in reality, ComfortDelGro’s cab-booking system already has a near-100 percent cater rate and its taxis arrive well within 10 minutes (barring rain and train breakdowns).

Uber customers who are unhappy with private-hire drivers who rely on unsophisticated navigation systems will have a sizeable pool of well-trained cabbies once an alliance is formed.

Fewer cars, higher salaries
An alliance should have immediate benefits to drivers too. An alliance will most likely lead to a fleet consolidation.

With nearly 44,000 cars and more than 25,000 cabs on the road, it is extremely tough for drivers to make a decent living today, even if not all are full-timers.

The maths is fairly straightforward. Even when the taxi fleet size was at its peak of 28,000-plus in 2012, cabbies were complaining that there were just too many cabs around and that their earnings were affected as a result. Now, there is a combined fleet of nearly 70,000 cars and cabs.

The obviously bloated situation today is not healthy to either operators or drivers, even if commuters are not complaining about the oversupply.

Once the fleet is streamlined, remaining drivers have a better chance of picking up more fares each day and taking home higher salaries.

Joint ownership?
The proposed cooperation is also expected to be deeper than the arrangement Grab has with the other taxi firms – an arrangement that does not go further than the firms allowing its cabbies to use the Grab app. If it were as informal as that, ComfortDelGro would not have deemed it necessary to issue a statement to the Singapore Exchange after trading hours on Tuesday.

So, if things go smoothly, we can expect some form of joint ownership of equity. Or it could lead to a licensing agreement which would allow ComfortDelGro to use Uber’s app and have access to its ridership data – the very tools the taxi group lacks.

UBER BOWING OUT OR COMFORTDELGRO SELLING OUT?
Although neither side would comment, it might even be a precursor to one side completely selling out to the other.

Is Uber bowing out of Singapore, like it bowed out of China last year (by selling its business to local rival Didi)? That seems not likely at this stage, even if anecdotal evidence suggests that Uber is having a harder time than Grab here. If nothing else, its Malaysian rival is not saddled with a depreciating asset base (namely, 15,000 cars). Commuters here also seem to “Grab” more than they “Uber”.

Observers may point out that Uber’s valuation stands at US$62.5 billion (S$85.2 billion) – enough to acquire the entire ComfortDelGro group 20 times over. Of course, valuation is not exactly cash in hand. Also, it was reported yesterday that some funds had devalued the strife and scandal-ridden company.

And that brings us to the not-so-rosy aspect of the proposed alliance. Does ComfortDelGro, a strait-laced union-backed Singapore company, want to go to bed with a maverick disruptor known for bending rules? Culturally, the two are as different as chalk and cheese. Which is why a buyout rather than an alliance cannot be ruled out.

Either way, this would not bode well for commuters or drivers in the long run. Because if there was a buyout, or even a consolidation, the competition we see today will probably be pared down – or extinguished altogether. And as economists tell us, end-users have reasons to worry when there is no competition in the market.

It may not be true for public transport like buses and trains, but for taxi and chauffeur services, Singaporeans will only have to recall what the situation was like before Uber and Grab entered the fray to know having one dominant player is far from ideal.

In working towards an alliance with Uber, ComfortDelGro clearly wants to preserve its dominance – a dominance that has slowly but surely been eroded since 2013.

But what actually transpires – a buyout, an entirely new joint venture, or just a co-sharing of booking apps – is another matter altogether.