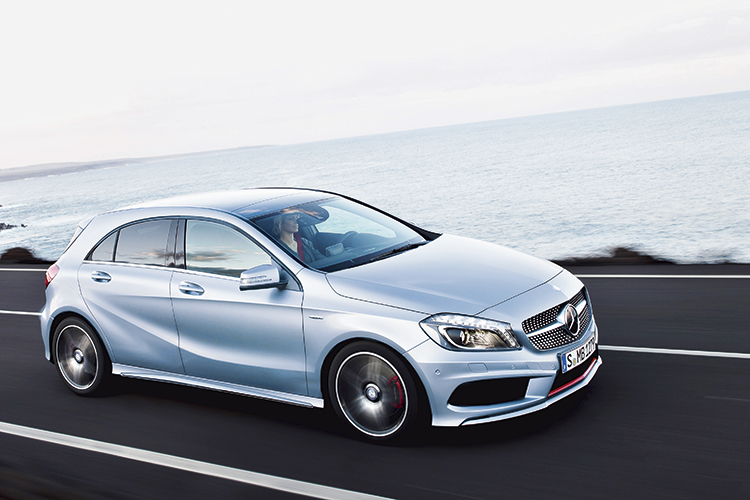 Confidently labelled “The pulse of a new generation”, the latest A-Class opens up a whole new chapter in the supermini segment, as well as in the history of Mercedes-Benz.

Forget the boxy, mini-MPV form of the previous A-Class – the only similarities between new and old are the alphabet “A” and the three-pointed star emblem. The third-generation A-Class started from a clean slate and every element is fresh, right down to the last detail. It even targets a new customer base – the younger generation, a demographic that has never been the brand’s focus.

Before you delve further (behind the wheel or under the bonnet), the car’s knockout looks are sure to get you first. Mercedes designers have long established a reputation for the sculptural quality of their passenger vehicles, and the 2012 A-Class elevates this design ethos to a whole new level. 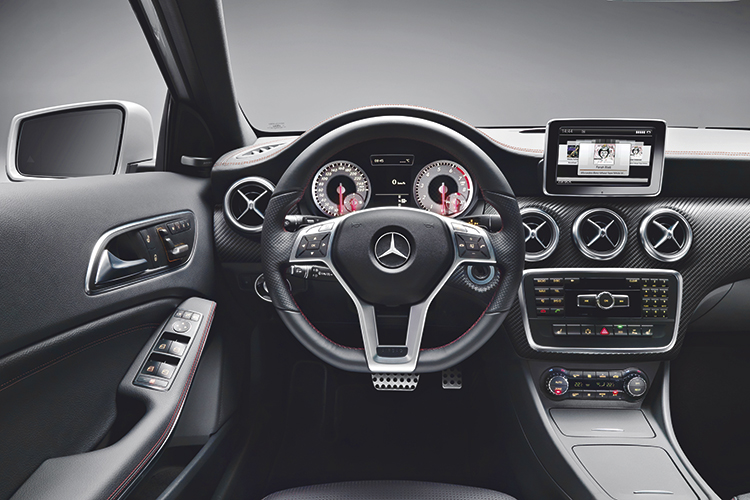 Similar to the new B-Class, but very different from the old A-Class in aesthetics, amenities and driving position.

The exterior’s intentional youth appeal is also reflected in the high-quality interior. Taking cues from aeronautics, many elements in the cabin adopt forms associated with aviation – for example, the five round air-con vents resemble jet engine turbines, the instrument cluster brings to mind afterburners and the seats are fashioned after pilot seats (without the ejector mode, of course).

The centrepiece of the cockpit is the airplane wing-inspired dashboard. Comprising an upper section and a lower “flap”, the installation is made up of different soft surface textures and three-dimensional structures embedded in foil, which create an illusion of depth using the play of light. All trim elements have an electroplated finish to give them the look and feel of real metal. Even the mood lighting is more sophisticated than usual – ambient lights gently illuminate the openings below the integral headrests of the front seats.

Add to this six different appointment lines and design packages that offer a wide range of customisation options, from AMG accessories and sports suspension to glossy trim panels and leather with contrast stitching, you can have your A-Class room the way you want it. 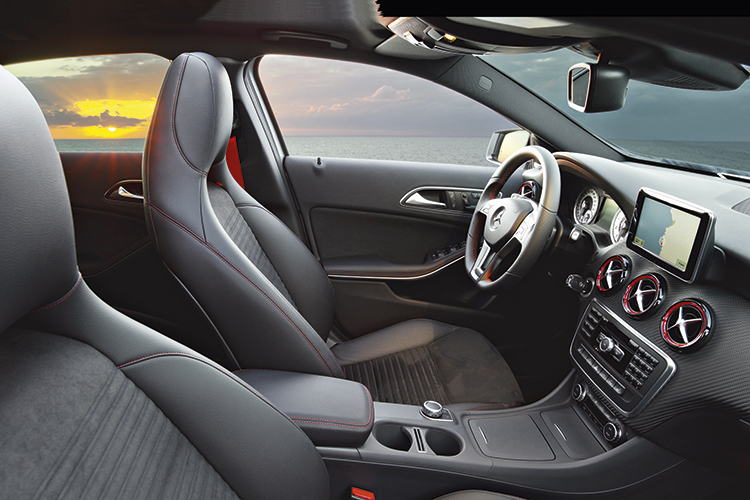 As for cabin room per se, there is enough for four people – five at a pinch. Thanks to the steering column-mounted gear lever, extra space has been freed up in the centre console for additional storage compartments. The boot’s 341-litre cargo capacity is comparable to that of a BMW 1 Series (360 litres), but the aperture shape has been made slightly awkward by the horizontal tail-lamp housings. In terms of cargo-carrying practicality, the new hatchback cannot match its MPV-like predecessor, but isn’t this one of the reasons why Mercedes offers the B-Class?

Protecting the A-Class’ occupants is an arsenal of anticipatory safety systems usually reserved for bigger, costlier cars. Most noteworthy is the radar-based Collision Prevention Assist, which works in tandem with adaptive Brake Assist. Other advanced safety systems which have filtered down from the saloon range to this supermini include Distronic Plus (which maintains the cruise control’s pre-set distance to the vehicle in front), Attention Assist (to combat driver drowsiness), Blind Spot Assist and Lane Keeping Assist (both self-explanatory).

Despite its “baby” status in the Mercedes range, the A-Class has 4-cylinder engines with BlueDirect technology derived from the V6 and V8 engines of the “big daddy” S-Class. BlueDirect is Merc-speak for optimised energy, efficiency and emissions. The two models slated for Singapore are the 1.6-litre A200 and the 2-litre A250, both with Euro 6-compliant turbocharged petrol units married to a standard 7-speed dual-clutch transmission called 7G-DCT. A 6-speed manual gearbox is also available in Europe for the A200 and A180. 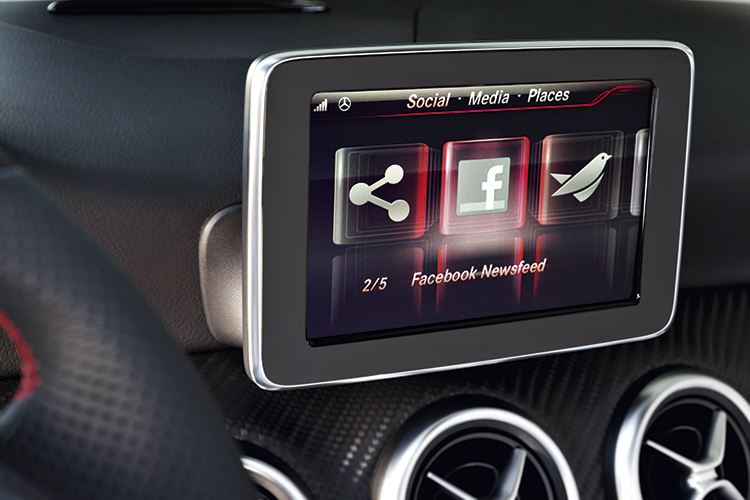 Popularised by Audi and Volkswagen, the dual-clutch is unexplored territory for Mercedes-Benz, which relied entirely on conventional torque converter automatics for its mass-market cars up until the new B-Class and, now, the new A-Class.

On the road in Slovenia, the 7G-DCT feels less earnest than the equivalent VW DSG, but is more seamless than the existing 7G-Tronic (the workhorse autobox in the Mercedes stable) and more natural than the defunct CVT in the previous A-Class. There are three different gearshift modes – Economy, Sport and Manual – to cater for different driving styles and scenarios, with paddle-shift override possible anytime.

In the new A200 powered by a turbo 1.6-litre, its 156 horses, helped along by 250Nm of torque that kicks in fully from a diesel-like 1250rpm, feel more competent than the same number put out by the C-Class’ superseded Kompressor engine of the same capacity. The acceleration not only seems more effortless, but the statistics confirm it, too – the A200 takes 8.3 seconds to complete the 0-100km/h run, versus 9.9 seconds in the supercharged 1.6-litre C180. 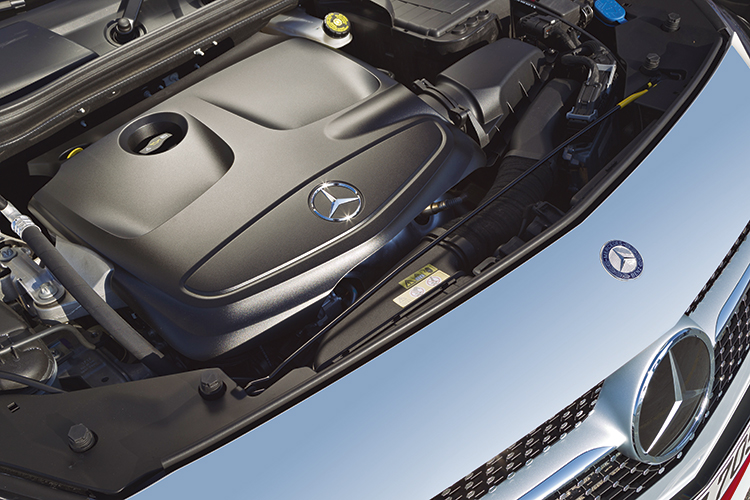 Even at high cruising speeds, the A200 can hold its own with the big boys in the fast lane, thanks to a much lower centre of gravity compared to its predecessor and a four-link rear axle suspension engineered for straight-line stability and lateral agility. There is sufficient torque under the hood to get up to speed and adequate power to keep pace with the rest of the motorway “motorcade”.

On winding roads, the A200 takes them in its stride and works its way “around” them in a composed manner, albeit with a slight tendency to understeer (a typical front-wheel drive characteristic). All in all, this hatch is fun to drive.

Theoretically even more fun to drive is the 2-litre A250, which boasts an extra 55bhp and 100Nm over the A200. However, the 211bhp/350Nm output is more impressive on paper than on asphalt, where the A250 sometimes struggles to handle the ample power. The electro-mechanical steering, although identical to that in the A200, feels strangely over-assisted in the A250 and even twitches occasionally. 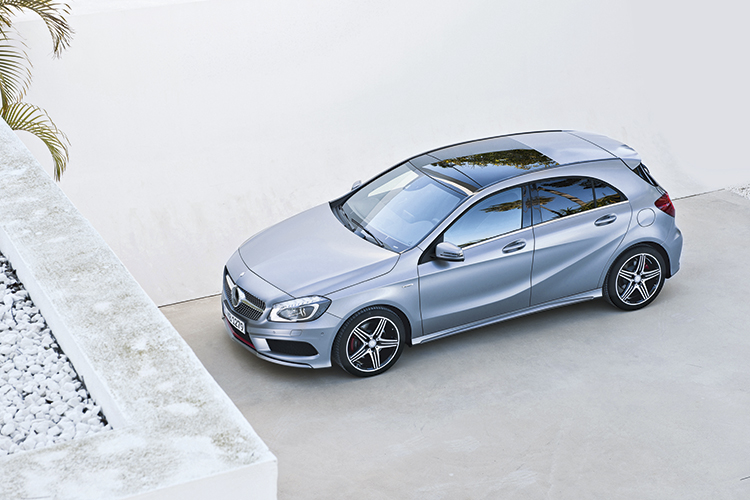 Modern German hatchbacks do not come more dramatic than the smallest Mercedes-Benz.

There are no such quirks in the A250 Sport, the A-class’ top-of-the-line variant right now. Its hot hatch-inspired features include AMG-engineered sports suspension, “Extended Traction Control” for the ESP (electronic stability programme) to reduce understeer when accelerating hard out of a corner, and more purposeful tuning of the engine, throttle response and transmission. On the specially set-up circuit at the airport in the Slovenian seaside town of Portoroz, the Sport-spec A250 was definitely more nimble than the regular model.

Even if the extra driving oomph doesn’t blow you away, the aesthetic enhancements will. Nobody can resist the “diamond grille” replicated from the A-Class concept, those 18-inch AMG alloy wheels and the devilish-red highlights (on the bumpers and brakes), while in the cabin, more racy red trim adorns the steering wheel, leather upholstery and air-con vents. The go-faster look of the A250 Sport makes me anticipate even more the A45 AMG, Mercedes’ first full-blown hot hatch whose world premiere is scheduled for early next year.

That should notch up yet another “A” on the report card of the new-gen baby Benz and make its tristar parent even prouder. This is Mercedes-Benz’s direct rival to the Audi A3 and BMW 1 Series.