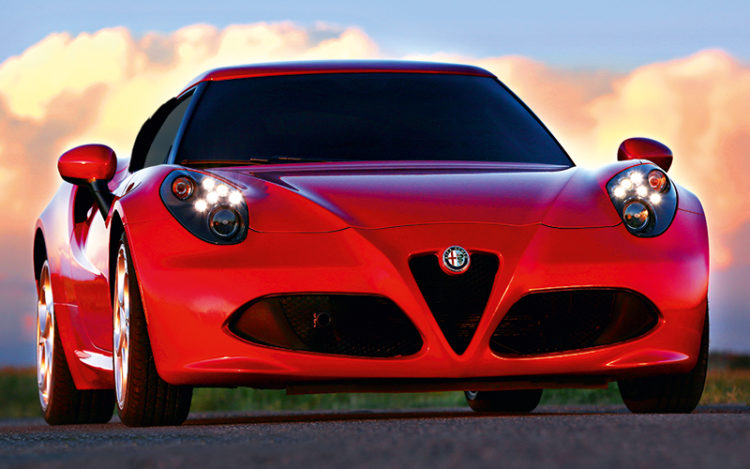 What a comeback! After plodding along for years with a lineup populated by sensible, front-drive hatchbacks and saloons, Alfa Romeo has at one stroke revived its magic of old with a stunning, bespoke sports car.

The new 4C is a dinky mid-engined two-seater, employing lightweight body panels hung from a stiff, light tub. It’s single-mindedly conceived for agility to the exclusion of anything that detracts from that goal, including creature comforts. If that sounds familiar, it’s because this is the exact same formula that Lotus employed to such great effect with its Elise.

It’s hard not to be smitten by the 4C at first encounter. The car is low, wide and stubby (just four metres long), looking simultaneously delectable and determined. My eyes feast on the details – a face dominated by pronounced V-shaped feature lines on the bonnet converging on that trademark shield-shaped Alfa grille, extravagant liquid curves draping the front and rear wheels, a waistline that kicks up dramatically at the body’s midpoint to meet the falling roofline; a short, visor-like glasshouse, and those evocative “telephone-dial” alloys. The headlights are intricate, each featuring a black oval shroud punctuated by naked lamp elements – indicator, projector main beam, and five little LEDs that light up like stars against a night sky. Alfa Romeo 4C is a pure two-seater, with limited bucket adjustment for the driver and none at all for his preferred passenger.

There are deliberate echoes of the gorgeous, limited-edition Alfa 8C of 2007 (see box story on pg 41) in the front and tail ends, but the 4C is, if anything, an even better-looking coupe.

Those sensually curved exterior panels are formed not of sheet metal, but from a lightweight composite material called Sheet Moulding Compound (SMC), which also has the advantage of being ding-resistant. The panels in turn clothe an even more lightweight carbon fibre monocoque tub, an engineering solution that until now was the preserve of million-dollar supercars like McLarens, Paganis, and Ferrari’s LaFerrari flagship.

The 4C weighs 895kg without fluids, which means that even with fuel and other fluids topped up (the way most other cars are weighed), it is still easily under a tonne. 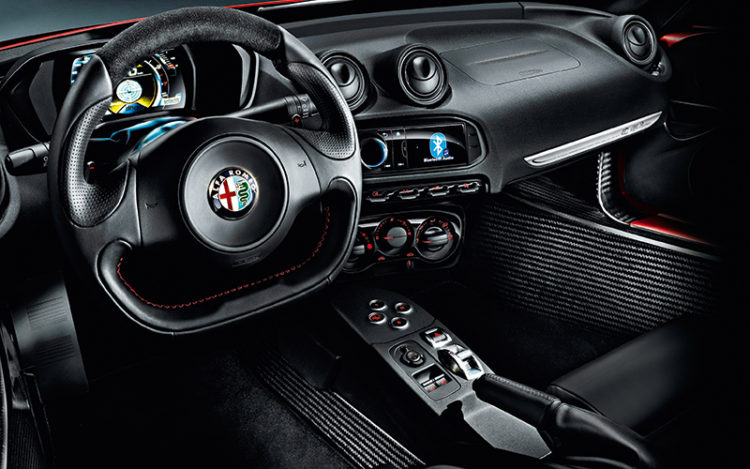 Say farewell to MiTo mediocrity from inside this beautiful, purposeful cockpit with exposed carbon fibre.

In racecar fashion, the suspension components are mounted not to subframes but directly to that carbon fibre tub – double wishbones in front and, unusually, a MacPherson strut setup at the rear.

The 4C is as drippingly gorgeous inside as it is on the outside. It is absolutely spartan – oddment storage is limited to an elasticised net in front of the passenger, a small pocket between the seats, and two cupholders. The interior is devoid of luxuries such as cruise control and satellite navigation – even the radio and air-con are (no-cost) options.

But what little cabin furniture there is has been carefully and lovingly crafted. The instrument panel comprises a thin film transistor (TFT) screen instead of physical dials, the minimalist fascia is angled tellingly towards the driver, and the small, flat-bottomed steering wheel is nicely sculpted and all the better for being devoid of the myriad buttons and controls that have sprouted on modern steering wheels.