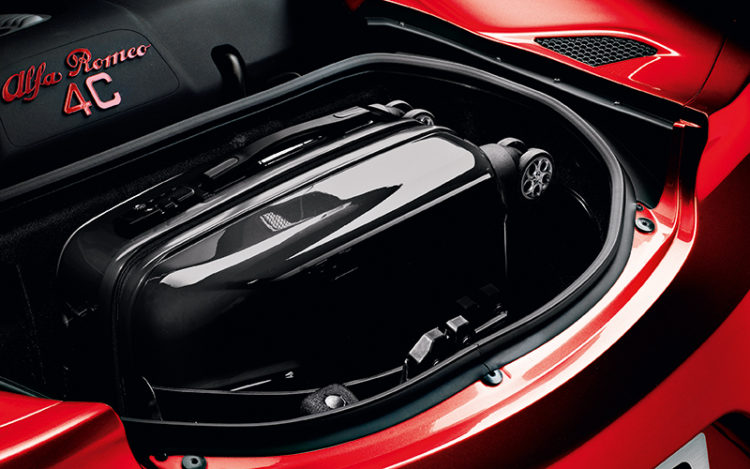 Alfa Romeo 4C only has 110 litres of boot space, and not much cabin stowage either.

The seats are thinly padded but lovely to look at. They are very comfortable, but given the 4C’s cornering ability, could do with more side bolstering. The driver’s seat only adjusts fore-and-aft and for recline, while the passenger’s seat is completely fixed. The door pulls comprise a pair of leather straps, racecar-like in their functionality but exquisitely stitched in detail. And to remind you of the 4C’s exotic underpinnings, parts of the carbon fibre chassis are visible on the door sills and along the footwells.

You sit very low in the car, but despite this, visibility is excellent in every direction except rearwards, where it is abysmal. Headroom is good, and legroom is also fine unless you’re significantly over 1.8m in height.

The steering, like that of the Lotus Elise, is unassisted. But it’s still perfectly manageable at low speeds, feeling meaty but not excessively heavy. Once past walking speeds, it lightens and just feels like any other nicely weighted helm. The other thing you’ll notice is that it has a very quick rack – Alfa says that 90 per cent of all corners can be tackled without the shuffling of hands on the wheel. 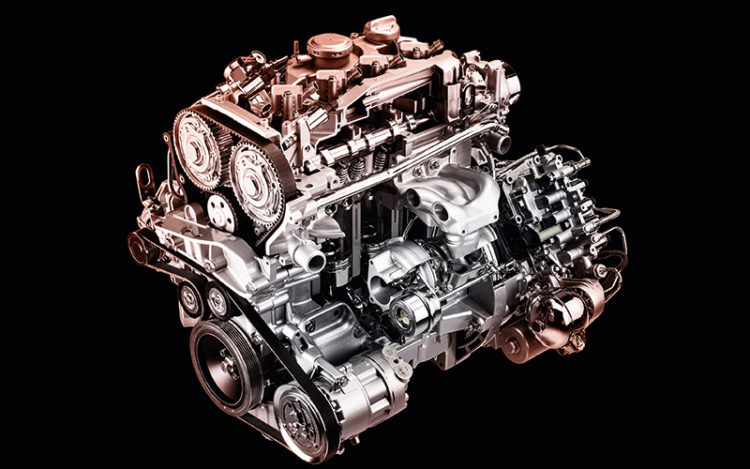 Alfa Romeo 4C’s turbocharged 1.75-litre is no Pavarotti, but it does give the coupe hearty and readily accessible performance.

The engine, mounted transversely right behind the cabin, is an all-new 1.75-litre turbo four-pot, slated to eventually replace the existing 1.75-litre unit currently serving in the Giulietta Quadrifoglio Verde. It’s 22kg lighter than the old one thanks to an aluminium block and other developments, and it delivers a feisty 240bhp of power and 350Nm of torque.

The motor sounds great when you start it up, all rorty exhaust and revvy blippability. It continues to provide aural entertainment to bystanders as you move off, but inside the cockpit, this is unfortunately drowned out by an oddly gritty low-rev note and an industrial-sounding induction noise at higher revs.

The 4C’s engine may lack some of Alfa’s traditional vocal sparkle, but it more than compensates by hurtling the lightweight coupe to 100km/h in 4.5 seconds, easily faster than the far more powerful (and expensive) Porsche Cayman S and level-pegging with its benchmark big brother, the manual 911 Carrera S. The engine’s forte is its broad wave of low- and mid-range torque – there is almost no turbo lag, and at most revs the car will respond to a throttle flex with instant, urgent acceleration. There is, however, less zest closer to the 6500rpm redline, so there’s no point hanging on to every last rev.

The powerplant is mated to a 6-speed, dry dual-clutch gearbox (there’s no manual option). Operated by steering-mounted paddle-shifters, the transmission can feel slightly lazy when moving off and at low revs, but when you extend the engine, the shift speeds up too. It doesn’t flare the revs on downchanges and never feels thrillingly urgent like, say, a BMW M3 DCT does, but it’s very effective nonetheless.

Massively quick the 4C may be in a straight line, but the point of such a light, focused mid-engined car is the way it corners, and the Alfa naturally excels here. We sample the car on track as well as on some seriously serpentine mountain roads, and the 4C is in its element on both.