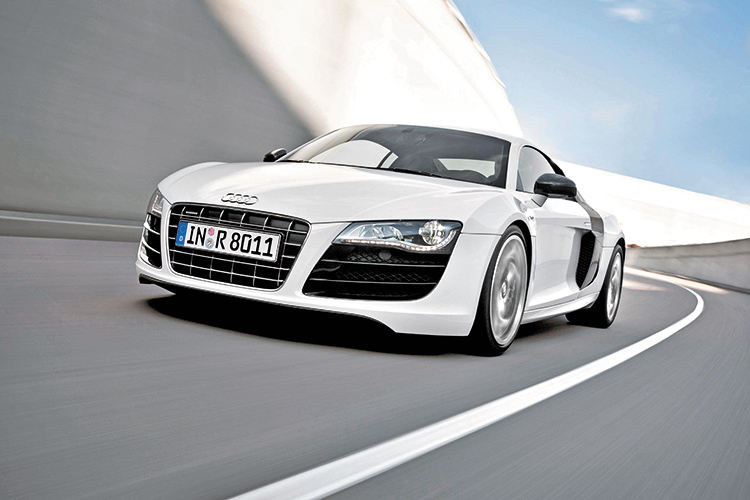 The design is the stuff of cutting-edge science fiction (think Will Smith’s car in I, Robot).

The technologies on board are similarly advanced.

The shell is built with Audi Space Frame technology, making it incredibly rigid yet light.

Its suspension has metal fillings in the dampers that get magnetically charged at the push of a button to firm things up. The engine features direct fuel-injection technology.

The majority, if not all, of the R8 5.2 that will eventually arrive in Singapore will be of the R tronic variety. 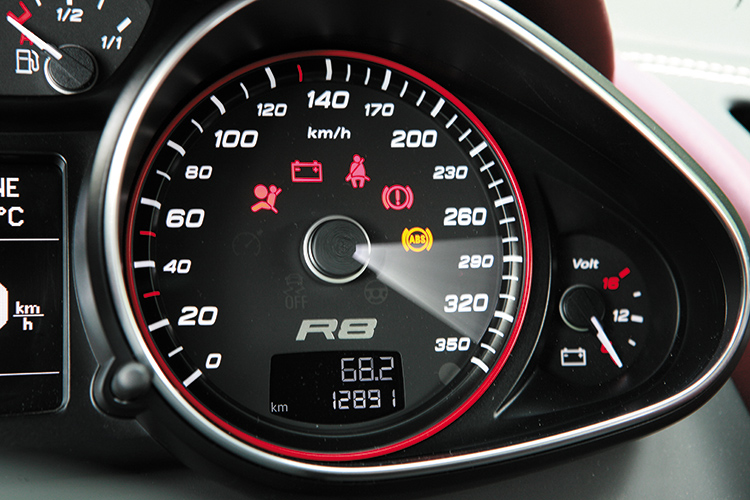 Audi R8 V10 gets unique red piping for the dials.

This is Audi’s version of the automated manual transmission popularised by Ferrari in the F355 F-1.

The car sampled in Munich, though, isn’t an R tronic; it is a manual.

You know, the kind that has a clutch pedal in the footwell, and the engine can stall and the gears can crunch if you are inept.

There is certainly irony about finding such a traditional (some say old-fashioned) device in a vehicle that stands as a technological tour de force.

And what sweet irony it is. The metallic gear lever stands proudly in the middle of a gorgeously machined shifter gate.

The ensemble does nothing to the R8’s cabin, if not accentuating the impression of a cockpit in a thoroughbred machine. 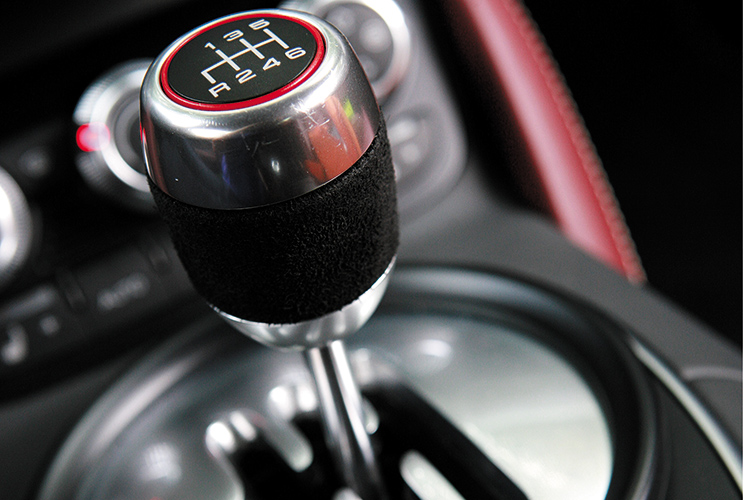 Firmly guide the metallic gear lever along the H-pattern transmission gate to the left of its neutral position and up into first – click, click!

The stick is firmly sprung and the throw is long, requiring a very deliberate effort to use (more deliberate than nudging the stick to “D” as with the R tronic, that is).

The result is a satisfyingly tactile experience. (FYI: The clutch is more forgiving than expected.)

Threading the manual R8 through peak hour traffic out of Munich isn’t as daunting as it seems.

Visibility is as good as an R8 has always provided. The suspension is cunningly pliant.

Perhaps the only niggle about using the car in traffic is the snatchy carbon ceramic brake system. 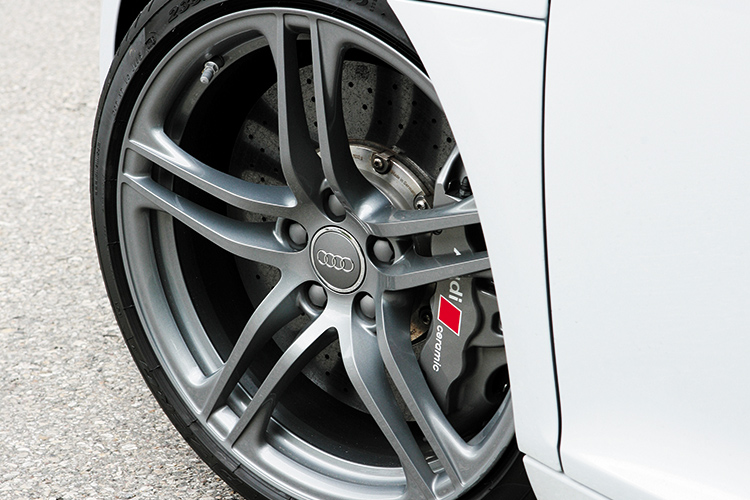 Otherwise, whether it’s working the signal stalks or managing the steering heft, the R8 is as friendly as an A3.

The extra power over the 4.2-litre V8 R8 isn’t particularly useful in the start-stop traffic, obviously, but it is docile, making no protests.

On the autobahn, where the 5.2-litre has the room to stretch its legs, those stallions come into their own.

Broadly speaking, the V10 offers two modes of play here: You can leave it in sixth and let the torque do the talking or let it rip by dropping a gear or two.

The engine will quite effortlessly pull from 2000rpm into top gear, but opting for the latter is almost always preferred because it means using that gorgeous disco stick (as Lady Gaga calls it).

The V10 doesn’t sound much more evocative than the V8 at low revs, but the animalistic howl it makes when racing for the high rev range is definitely more tingling. 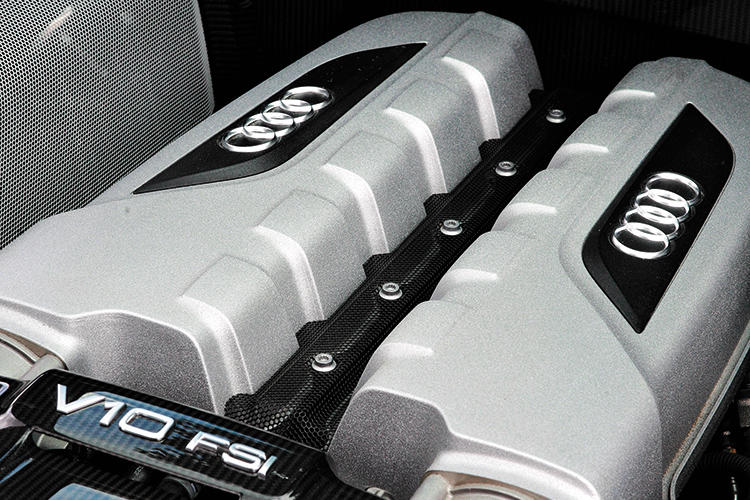 A firm plod on the loud pedal and, momentarily, it will seem that the speedometer needle has been wired to the tachometer, increasing the speed with eagerness.

Those ceramic brakes make quick work of shedding speed, too.

Perhaps more fun than reeling in distant objects on the autobahn is carving lines on the tighter (albeit slower) country roads.

The suspension does a tremendous job pinning the gumball Pirellis firmly onto the tarmac, with the car ever ready to put down more power.

There is never any doubt that the convenience and speed of the R tronic to execute gear changes at the flick of a (steering-mounted) paddle will be quicker than even the best drivers can with their hands and feet.

But on such roads, it is never about the stopwatch and everything about feeling good. 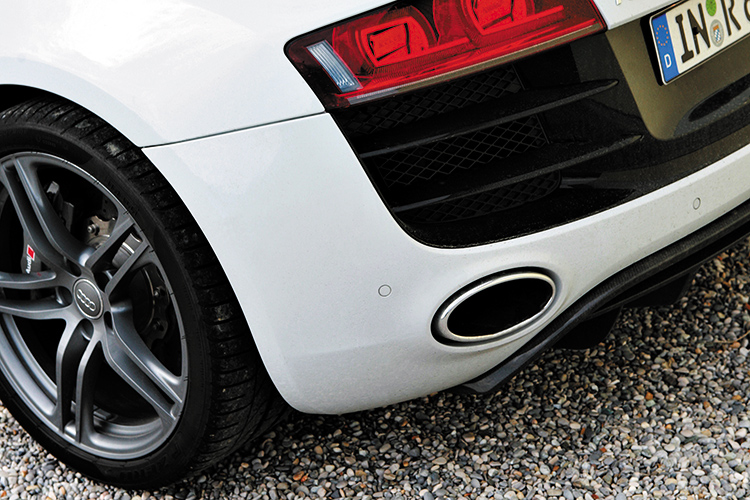 There are actually two pipes behind the oval cutter.