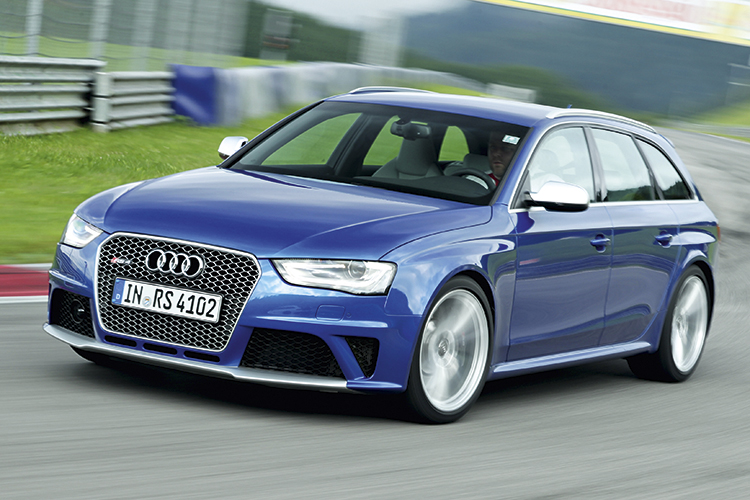 The abbreviation RS is for the German words Renn Sport (or Racing Sport), and it has become one of the car world’s most evocative badges of honour. In the case of Audi, its RS lineage began in 1994 when it collaborated with Porsche to develop a high-performance estate, the RS2.

Another six years would pass before Audi introduced another RS model, the B5-based RS4 in 2000. This 380bhp twin-turbocharged 2.7-litre V6 rocket was an Audi-only effort, without any degree of input from Porsche.

In 2005, the B7 version of the RS4 was launched, with naturally aspirated power from a 420bhp 4.2-litre V8 also employed in the flagship R8. Then the RS4 went missing in action again for seven long years, until the 2012 edition featured here entered the picture. 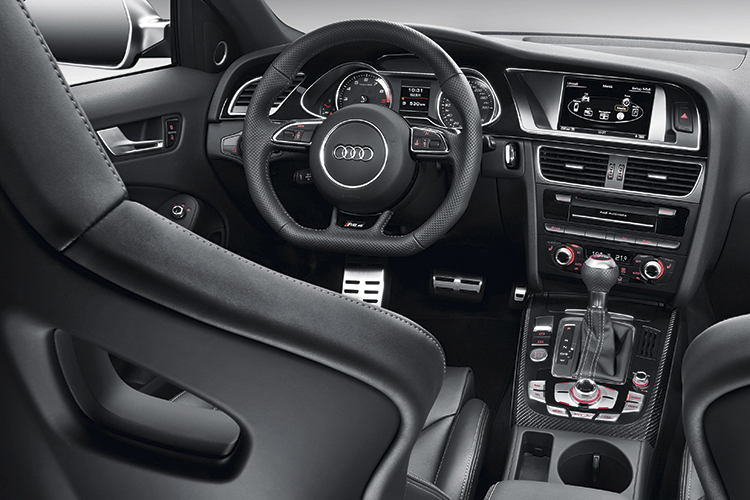 Carbon fibre “scales”, two of the best “saddles” in the fast-car business, and a 450-litre carrier on the “tail”.

And what nice pictures it makes, the latest RS4. Available only as an Avant (Audi-speak for station wagon), just like the RS2 of yore, the newcomer has an exterior sufficiently different from that of the S4 estate.

Those deliberately blistered fenders, for instance, help to accommodate big 265/30 R20 tyres (standard size is 19-inch) and bespoke wheels that give the RS4 added visual aggression over the S4. The front has a neat splitter-spoiler that looks impossibly low, yet it did not scrape the ground once during our Red Bull Ring track attack and on the country road course. The whole car sits low, in fact, with its suspension “dropped” by 20mm compared to the regular A4 Avant. At the back is a fancy rear valence with integral diffuser, along with a spoiler at the top of the tailgate to improve aerodynamics. Even if one were to de-badge the new RS4, it still would be easily recognisable.

Under the RS4 bonnet, there is no turbocharger or supercharger. Audi, admirably, has stuck to natural aspiration for its super-A4. Forced induction provides impressive power and economy figures, but the naturally aspirated route is arguably purer, which is just the way serious enthusiasts like it. 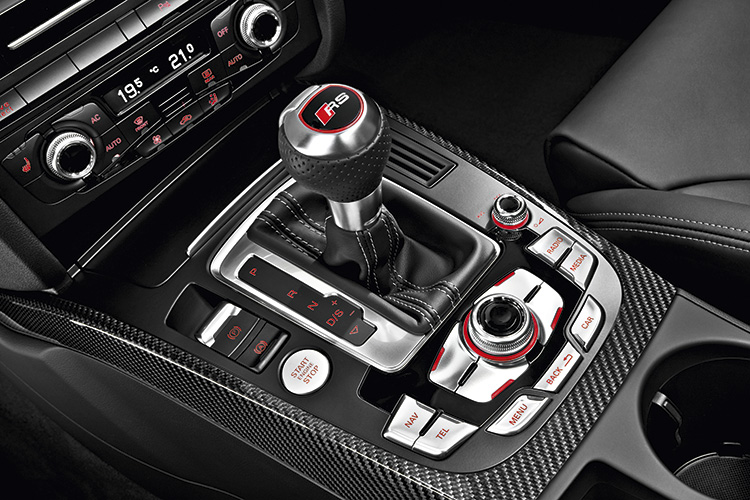 Said petrolheads may wonder, though, whether the RS4 V8 is the same one in the RS5 since they both have a similar 4.2-litre capacity. There are actually detail differences, which include a lower compression ratio of 11 to 1 – versus 12.3 in the RS5 and 12.5 in the former RS4. The output is now 450bhp, 30bhp higher than before, and this is produced at well above 8000rpm – the older unit would have run out of breath some time before that.

The new V8 is also a lot less thirsty than the old one, to the tune of 20 per cent. Compared to the RS5 V8, the 70kg heavier RS4 consumes one litre less fuel every 100 kilometres, and its CO2 emissions are a smidgen cleaner.

The horsepower is put to all four wheels through an optimised 7-speed, dual-clutch S tronic gearbox. There is no manual transmission option (whereas the previous RS4 is manual-only). 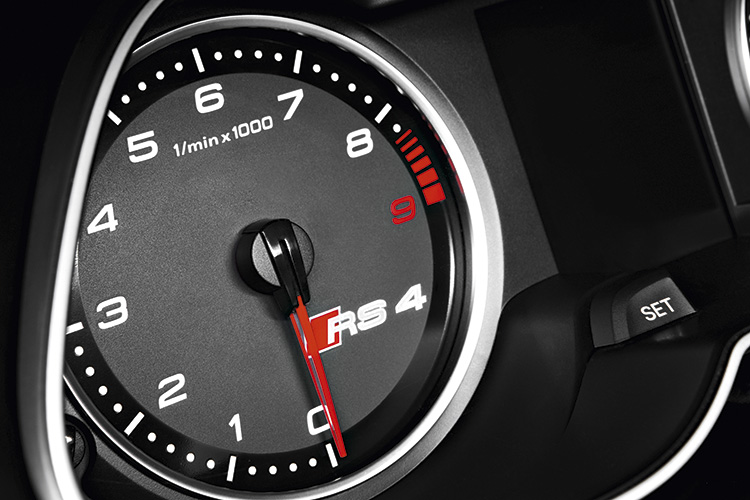 A suitably uprated suspension underpins the car. The roll bars are thick, with the rear one looking especially stout. DRC (dynamic ride control) comes as standard, allowing the driver to configure the three-stage damping via the cockpit MMI (multi media interface).

DRC is an ingenious network of hydraulic lines with a central valve that connect diagonally opposed pairs of shock absorbers. During fast cornering, the system helps the “outside” wheels to resist untoward movement by transferring the compressed fluid between the relevant cross-linked dampers.

Another RS4 special are the fluted-wave steel brake discs, designed to disperse heat more effectively. They also shave roughly 3kg off the vehicle’s unsprung weight. The optional carbon-ceramic brakes are even lighter, of course, and they promise excellent stopping performance, although they are only fitted to the front (the same for the RS5). 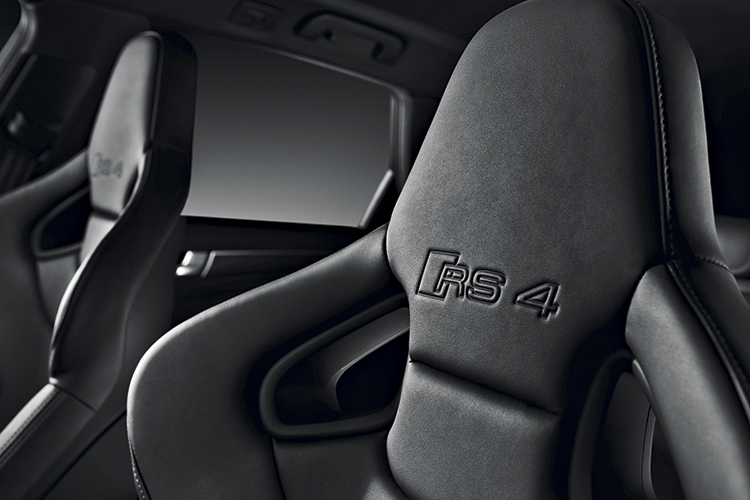 In line with industry trends, electric power steering has been specified for the RS4. The wheel twirls “heavily” in an old-school sort of way, but a surprising amount of feedback gets through the rack. There is a Comfort mode that makes the steering feel effortless in a slightly artificial manner (albeit less “fake” than in the RS5), and a Dynamic mode that reduces assistance
to the rack.

In the sprint to 100km/h, the RS4 takes 4.7 seconds – an academic tenth of a second behind the RS5. The vehicle’s launch control is foolproof – just turn off the ESP, select Sport+ for the transmission, then keep your left foot on the brake pedal while your right foot presses the accelerator fully. The revs will jump to a pre-set level and stay there until you release the brakes, which will make the clutch bite hard and the car slingshot away like a dragon out of hell. There’ll be a slight chirp from the tyres in the instance when the brutal take-off overcomes the static traction of all four wheels.

On an unrestricted autobahn, the RS4 can hit 250km/h – 280km/h if the electronic limiter has been deactivated at the factory. With an ample 430Nm at your disposal from 4000rpm to 6000rpm, gaining even more speed “at speed” is very easy. Every gear feels like the right one everytime, except the highly “overdriven” seventh ratio. 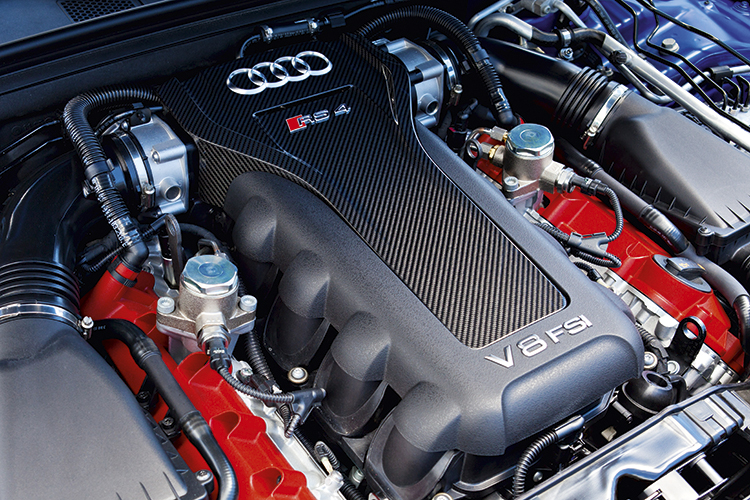 RS4’s roaring 4.2-litre V8 produces a punchy 450bhp and 430Nm, giving a power-to-weight ratio even better than that of the RS5.

At the Red Bull Ring, we discovered that the new RS4 is friskier than the rather strait-laced RS5. Including the driver, the wagon’s weight is on the wrong side of 1.8 tonnes, but it leaps out of bends like it were 300kg lighter. The mechanical grip is, of course, tremendous thanks to the 30-profile, 20-inch ContiSportContact 5 performance rubber fitted to the test car.

But more importantly, these tyres can be coaxed to slide in corners and the overall handling attitude can be adjusted by the driver with ease. The quattro all-wheel drive allows the application of full-throttle energy to be executed early, while the clever sport differential in the rear makes power oversteer readily available to keen drivers who find understeer a killjoy.

If they enter a corner too quickly on a trailing throttle, the RS4’s rear end will edge out in a benign way, which actually improves the turn-in. Go even quicker into the same corner, and the car “brings” its tail around, especially in the Dynamic drive mode. The electronic nannies have been programmed to stay out of the way as far as possible, giving you ample opportunity to handle the drift. 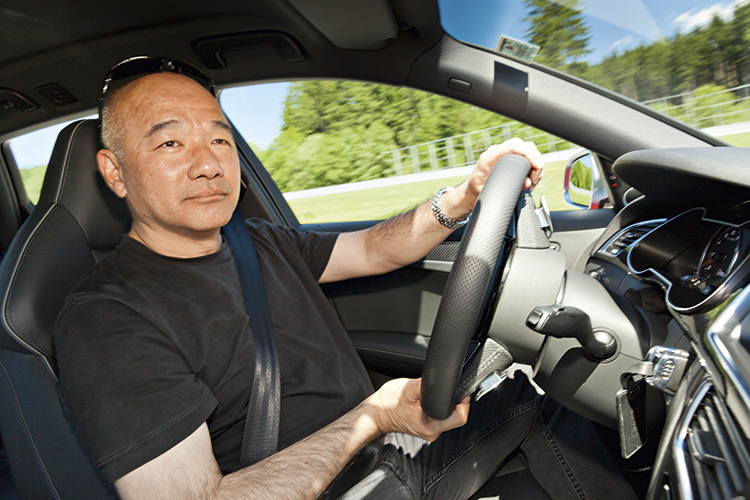 The ride quality is ideal in Normal or Comfort mode, but a touch too firm in Dynamic. With the handling behaviour not penalised by either of the “non-dynamic” modes, they can be used for most motoring situations – save the sportiest setting for the racetrack or empty countryside lanes. There is also an Individual mode that lets the driver “hot key” his preferred suspension, steering and drivetrain configuration.

Much of the RS4 cockpit is shared with the S4, but there is a pair of supportive Recaro sport seats that come with adjustable seat-backs (no fixed-cushion “torture” here). The interior is colour-coordinated with the exterior paintwork, but the Audi factory offers the more “colourful” buyer some degree of customisation. There are numerous “RS” and “RS4” cues in the cabin – not that the occupants need much reminding that they’re sitting in something special, especially the driver and front passenger nestled in their Recaros. 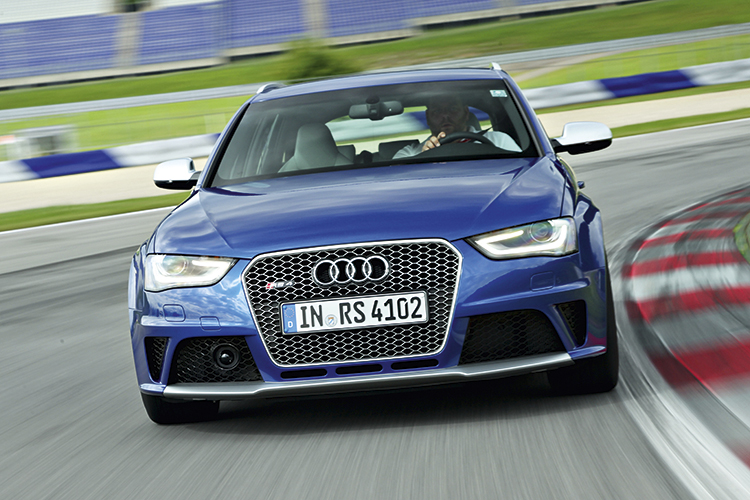 Nestled in a niche of the performance car segment is the RS4 Avant, but it is not alone there, with Mercedes’ C63 AMG also available as a souped-up station wagon. In Singapore where saloons are far more popular than estates, the new RS4 will be an offbeat choice, but half of the old RS4s still on the road here are wagons, so there is a real market for this quirky Audi – in addition to its cult following. 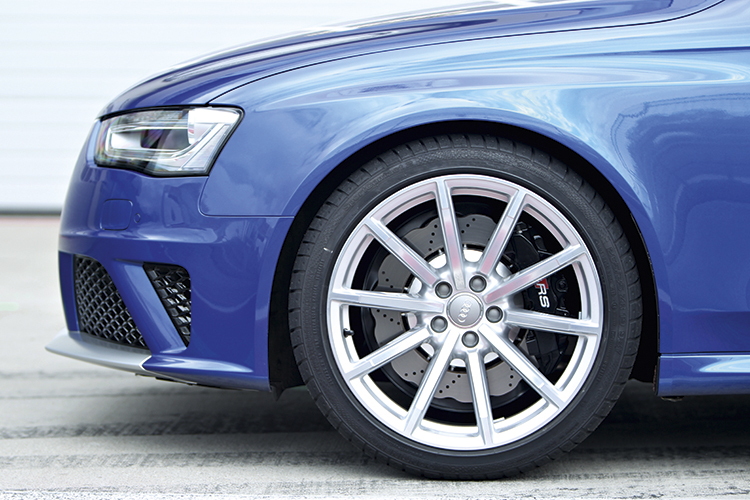 Internally ventilated “wave” disc brakes might equip other blue-streak Audis in due course.

Even though the supercharged S4 is a brilliant driving machine in its own right, the RS4 is in a different league. It’s aesthetically more aggressive (with plenty of sheet metal changes), its performance is even more purposeful, and its handling advantage is perfectly useable. 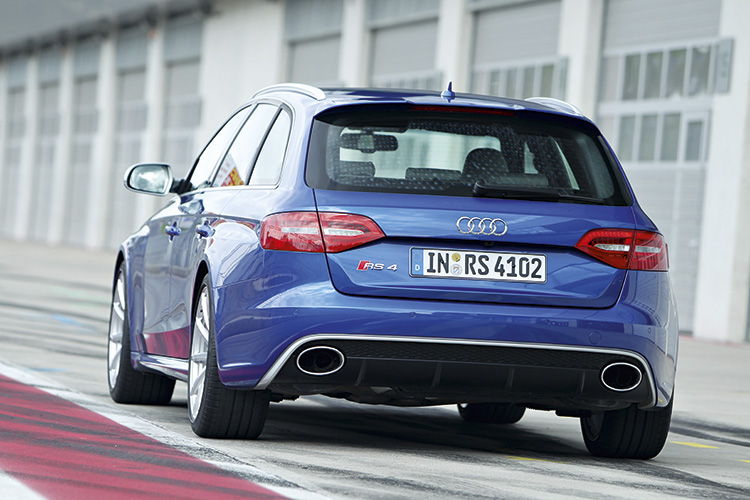 I reckon the RS4 has hit the proverbial bull’s-eye more accurately than the RS5.

Put simply, the latest RS4 is a superb successor to the previous model.