Audi S8 is the super version of the Audi A8 limousine | Torque
Loading posts...
0 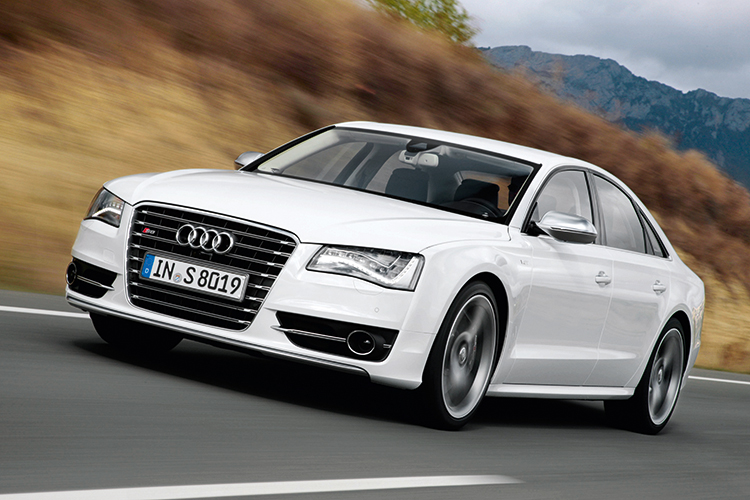 Calling this car “RS8” would be making promises it cannot keep.

Four-point-two seconds. Tucked away in the new Audi S8’s specs sheet is a figure that catches the eye – the car’s zero to 100km/h timing. It makes this limo one of the fastest-accelerating saloons on the planet – clear even of BMW’s latest M5, which does it in 4.4 seconds.

But you’d never know just by looking at it. Despite this over-endowed A8 being Audi’s most accelerative model bar the R8 V10 and R8 GT, Audi hasn’t blinged it up much. Most obviously, it has a new front grille with eight chromed horizontal slats, along with more pronounced side skirts.

Look closely and you’ll also discover a squarer-jawed rear bumper with a diffuser-like centre section, quadruple tailpipes and 20-inch rims (21-inchers optional). The S8 also rides 10mm lower than the A8 – this, plus a host of detailed changes, gives it a slightly more purposeful stance. 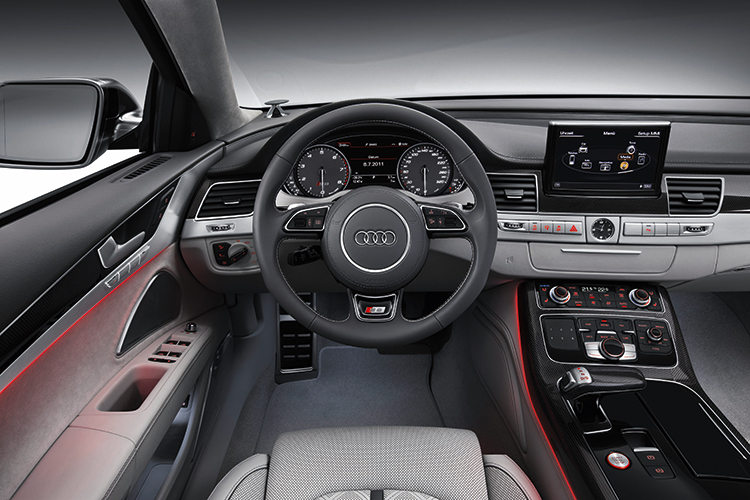 Audi S8’s advanced amenities and indulgent luxuries are shared with the A8 4.2, but some materials have been specially selected.

It’s all very subtle, though, and to the untrained eye the S8 is virtually indistinguishable at a glance from the normal A8. That, no doubt, is how most owners like it.

Inside it’s virtually all A8, which is no bad thing. You’re cocooned in plushness, with ample space front and rear. There is a full complement of cabin equipment, including a 14-speaker Bose surround sound system (you can also opt for an even more extreme 19-speaker B&O hi-fi), four-zone automatic air-conditioning, LED ambient lighting (with choice of brightness and colour), a 9-inch MMI screen and 360-degree parking cameras.

There are some subtle touches to mark this out as an S8 cabin, such as 22-way adjustable sports seats for the front occupants, Alcantara headlining, aluminium-look pedals and switchgear, subtle chrome accents here and there, and genuine carbon fibre inlays on the gear selector lever, doors, fascia and centre console. This last feature, apparently, involved Audi developing a new method that allowed the carbon fibre to drape perfectly over each surface. 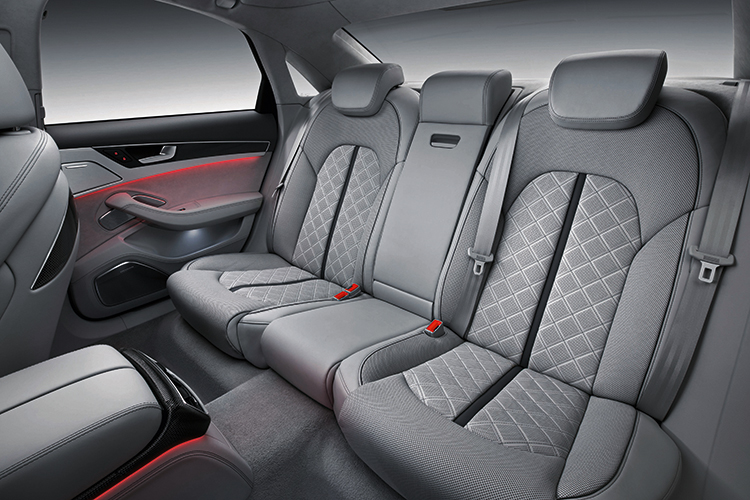 The S8 may hide its light under a bushel, but drive it and there’s no question that it’s something special. Its 4-litre V8 is an all-new powerplant, and consistent with the industry-wide downsizing trend, it’s much smaller than the outgoing model’s 5.2-litre V10. It more than makes up for this with twin-turbocharging, which drives output up to 520bhp and 650Nm, 400Nm of which is available from just 1000rpm.

This engine’s layout is innovative in that the exhaust valves of its cylinder head sit on the inside, allowing the turbochargers and intercoolers to be mounted within the valley of the two banks of cylinders. This allows for speedier spooling-up of the turbos (thanks to the air travelling a shorter path) as well as more compact dimensions.

Even more clever is its Cylinder-on-Demand technology, which shuts off fuelling and ignition to four cylinders (two from each bank) when certain conditions are met – engine revs are between 960rpm and 3500rpm, the car’s speed is at a steady state, and the ‘box is in third gear or higher. 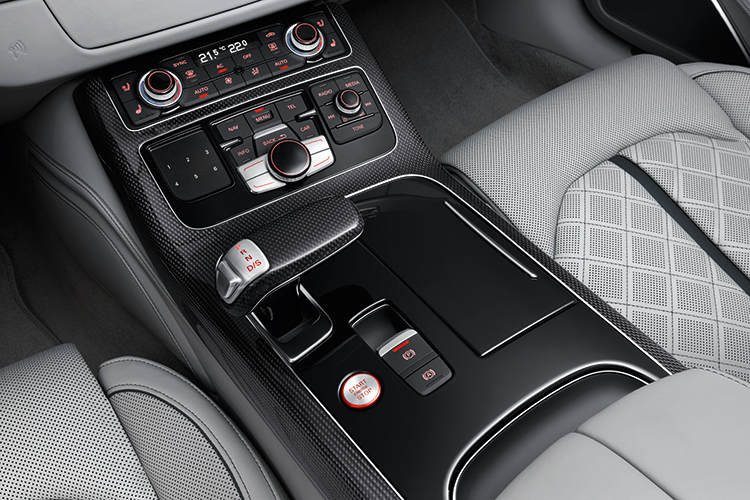 This feature alone cuts average consumption by about 10 per cent. With the benefit of other green measures like stop-start, energy regeneration technology and the fact that the engine is 1.2 litres and two cylinders smaller than the old one, the new S8 is an impressive 23 per cent less thirsty than its predecessor.

But the reason so many luxury cars run V8 engines is for the wonderfully throbby woofle they make. With half of the S8’s cylinders switched off, the engine would sound very un-V8 like indeed, due to the wider-spaced firing pulses. In fact, it would resemble a very sick 4-pot.

To restore aural quality with the engine in “V4” mode, the S8 uses what Audi calls ANC (active noise control). This system continuously monitors interior sound levels and quality via four microphones in the headlining above the side windows. 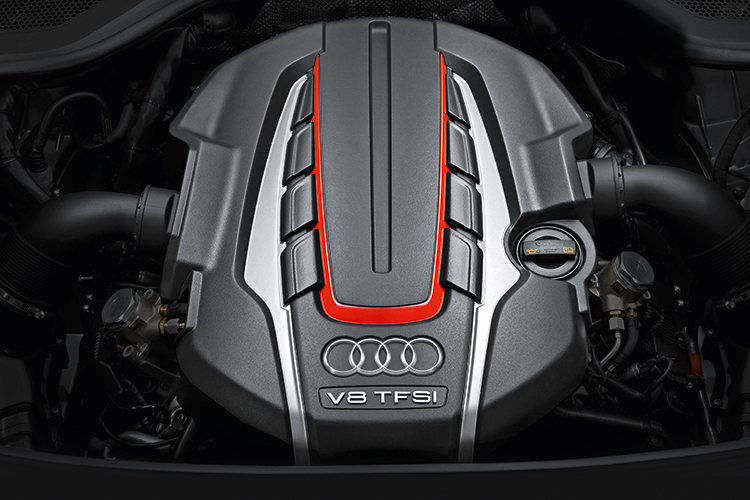 When cylinder shut-off occurs, ANC activates the speakers in the stereo to emit sound pulses to replicate the beat of the dormant cylinders (incidentally, the system operates independently of the in-car entertainment).

The S8’s V8 also sits on active mounts, which are controlled by the same system and throb in sync with the engine to counteract unwanted vibrations.

It works brilliantly and imperceptibly, the engine always maintaining its creamy V8 purr regardless of how many cylinders are in use. In fact, the only way to tell that cylinder shut-off has occurred is when the consumption numbers in the instrument cluster turn green.

Expect to see Cylinder-on-Demand proliferate throughout the VW/Audi conglomerate, because this new V8 will, in one guise or another, power a whole range of the group’s future top-end performance derivatives – from sister cars in the Audi line-up such as the S6, S7 and RS6, to even the Bentley Continental GT. 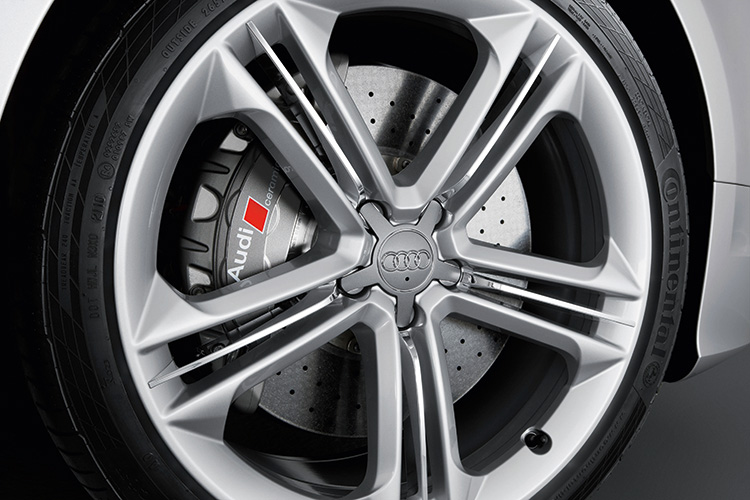 And given that Audi’s 3-litre supercharged V6 is present in some VW and Porsche models, it’s not much of a stretch to expect that this engine may find its way to Wolfsburg and Stuttgart, too.

Audi was brave to let us loose on Circuito de Navarra, a brand-new racing facility in the north of Spain, but truth be told, the S8 is not at its best in such a setting. Racetracks are never the best showcase for a two-tonne limo, even a sporty one. Understeer is the overriding characteristic in the tighter turns, and only on the track’s faster sweepers and straights can the S8 really stretch its legs and exploit its stupendous performance.

But on the open road, in its more natural environment, the S8 shines. Turn-in is very keen for such a big car, grip is strong, and with all-wheel drive, traction is practically unimpeachable. Pour on the power at the apex of a corner, and the car will simply grip and punch its way out with complete authority.

Power is typically apportioned 40:60 front to rear, although the balance can be varied within a very wide range, and this works together with the standard sport differential to give the S8 chassis a welcome dose of attitude, edging the tail out usefully but controllably as you belt out of each bend.

The steering helps by allowing you to place the car with confidence. It has a speed-dependent variable rack, with quicker gearing at lower speeds for a more nimble feel, and lower gearing when you accelerate. You don’t feel it juggling its ratios, though – it just feels very linear, with decent feedback through the rim and consistent weighting. 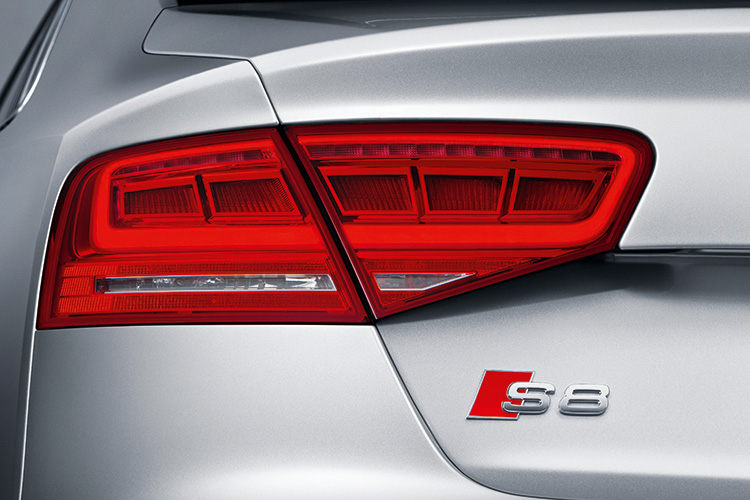 Driven thus, the S8 feels much smaller and lighter than it is, letting you maintain serious pace on a meandering back road, even with the adaptive air suspension in Comfort mode. Switch it to Dynamic mode and body control gets even tighter, the car hurtling from bend to bend and handling crests and dips with utter composure. There is still some body roll, but never enough to annoy. Among its rivals, the S8 perhaps falls short of the Panamera’s outright agility, but then again, the Porsche is a smaller, lower-slung and lighter vehicle.

The 8-speed Tiptronic autobox is responsive to commands and slurs its way through its ratios seamlessly. You don’t even need to bother with it to extract the S8’s pace – with 650Nm of peak torque available all the way from 1700rpm to 5500rpm, enormous shove is always on tap, regardless of your choice of gear. We already know about its spectacular standing-start time, but its mid-range wallop is just as storming.

What the engine does lack, given its flat torque curve and relatively tame 6500rpm limiter, is a high-rev flourish, an aural and tangible crescendo that makes the difference between a crushingly effective engine and a truly exhilarating one.

The S8 also does superb service as a luxury ride. With its air suspension in Comfort it is cosseting, and even in Dynamic mode it is very comfortable. Refinement is top-notch, of course; the engine a distant hum at a cruise, with both road and wind noise very well suppressed. 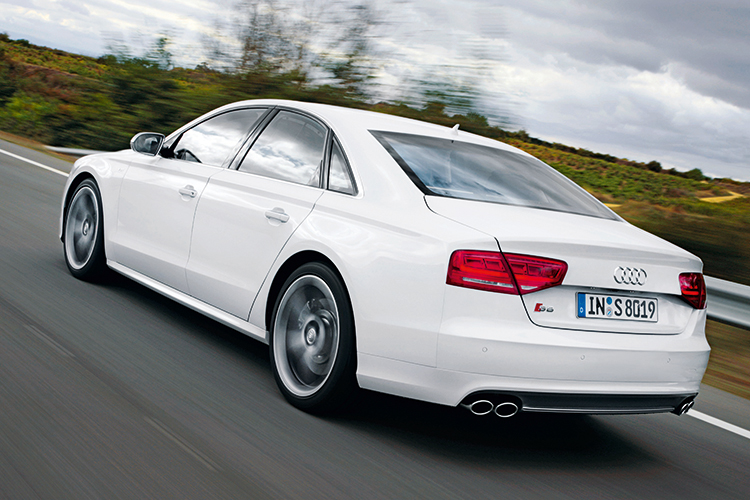 If it initially seems odd that Audi has not deemed such an immensely quick car worthy of the “RS” badge, all becomes clear after driving it – because it is not, and was never meant to be, a hardcore, uncompromising performance tool.

It’s a sharper, (much) faster A8. That’s why Audi doesn’t make a big deal of its performance figures. That it can smoke an M5 to 100km/h is almost incidental, but good to know.

Check out the latest Audi S8

Audi A8 4.0 discusses matters of the “heart”