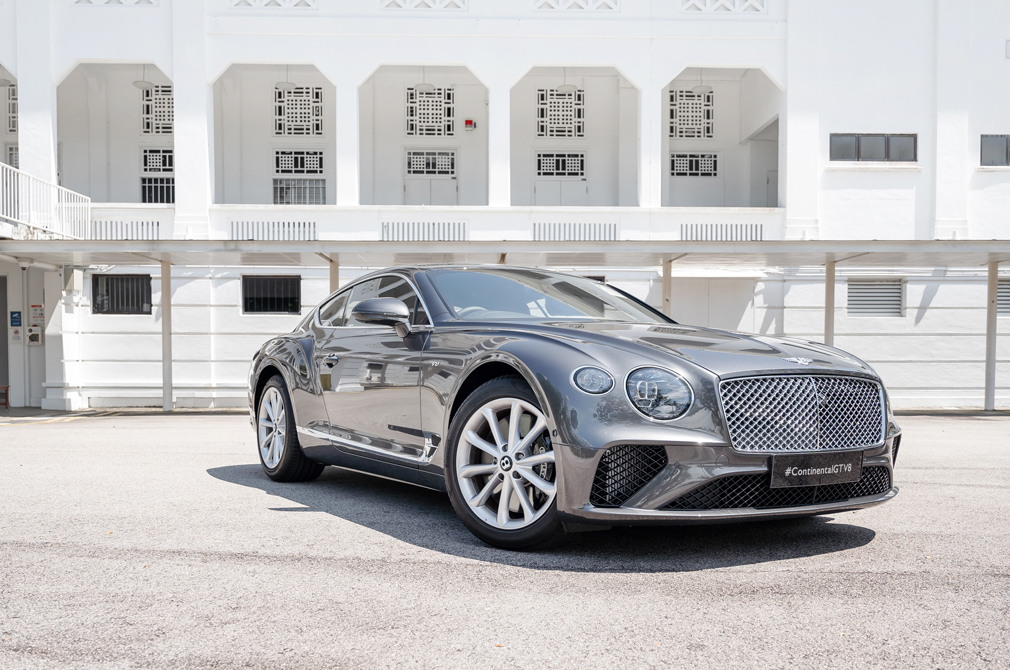 After a month of making serious faces at the deeply impressive but ultimately aloof litany of new-age electric cars, it feels wonderful to fall into the rich, decadent embrace of internal combustion.

What an embrace it is. Like being hugged by an actual fluffy brown bear, the opulence of Bentley’s burbling, baritone motor is saturating.

Dear V8, oh how I’ve missed you… and when Elon the Evil inevitably becomes Grand Vizier of the New World Order, oh how I will miss you so.

Anyway, down to business. Here beneath me, having awoken from slumber with a dragon’s roar, is the new Bentley Continental GT V8.

There is an even more debauched W12 model out there for those who want to spend even more coin, but this car is lighter in the nose and still 542 horsepower and 770Nm strong.

Certainly, there is a slinkier, more modern appearance to what remains a very recognisable shape.

A sweeping character line arcs back from the more prominent headlights for a marginally more pinched, piercing silhouette. It manages to banish the last vestiges of inelegance from the old car’s bluff and rather ostentatious design. 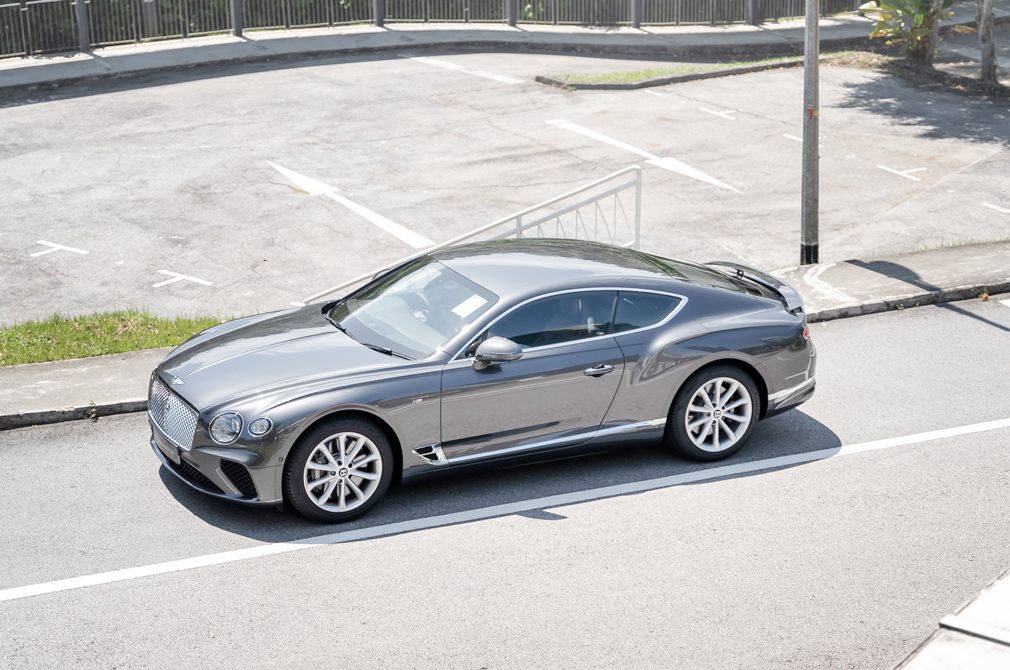 Graceful does not mean delicate though, and particularly in this test car’s menacingly gleaming “anthracite” (a word I swear I learnt from car brochures) paintwork, the new Conti cuts a classily powerful form.

The difference between a $100k car and a $120k car is a powered tailgate here, an electronic doodad there. The distinction between a $300K upper-middle-class mobile and a million-dollar monument to remorseless capitalism is in the finest hand-crafted details.

As such, I poke and prod and fussily examine the Bentley Continental GT’s interior in an overscrupulous fashion – something I would never do even in an S-Class.

I discover, as you would expect, acres of wood and exquisitely stitched leather hewn so tightly together my exacting fingernail finds no gap to nestle itself in.

You want yacht-like, old-world drawing room sumptuousness? What we have here is beyond reproach. Bentley’s Mulliner bespoke division will happily let you customise colours and fittings to your bourgeoise fancy, too, if you like.

It is too bad this car does not come fitted with the rotating centre screen that conceals the big infotainment unit behind a row of analogue dials that are set in even more opulent wood. 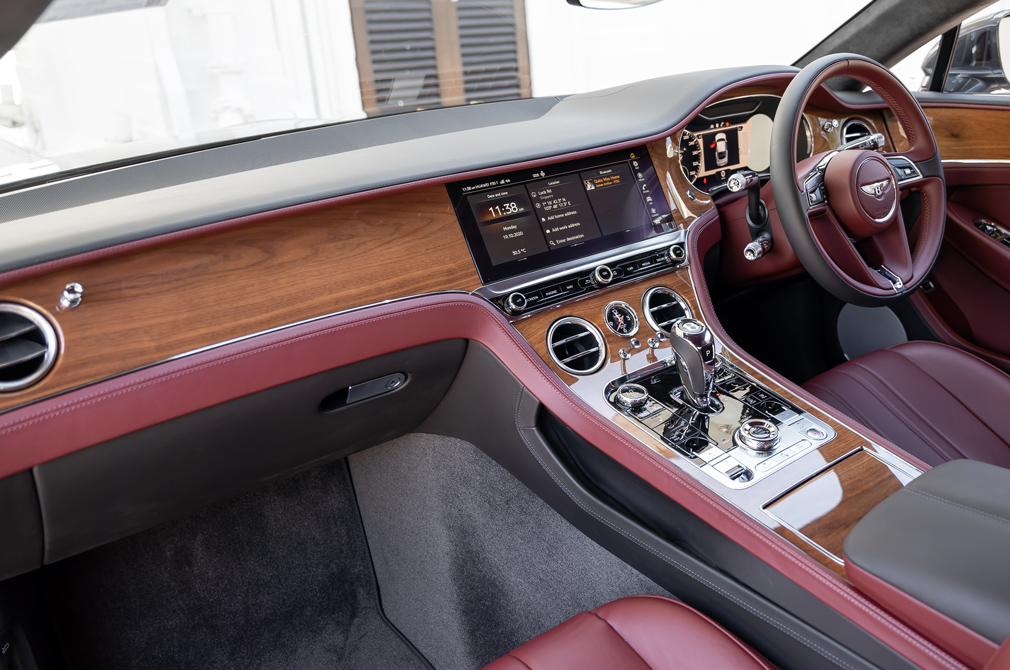 I think I might, as a Bentley owner, quite like to keep all that electronic functionality hidden.

As we will discover, you can go digging around the menus like the plebs in their Audis and Porsches do.

However, this Bentley Continental GT V8 is more than capable of playing the good butler and serving up a driving experience of “just-right” no matter your mood if you simply get in and leave it to its devices.

There are quite a lot of buttons though, which is good, because it means the functions are accessible without the need for touchscreens.

What might not be so good is that some of them, particularly the ones on the steering wheel, operate with a bit of an unbecoming clack, and whisper it, obviously come from Audi.

Is that brazen Audi-ness a problem though? Not at all, I think, for two reasons. The rarefied clientele here probably would not have spent much time sloshing around in the lower levels of VW-dom. So, they may not even notice.

But if they have, they would be more likely to appreciate the familiar ergonomic excellence of these than be offended by their presence. As a functional foundation, there are few better.

If I were to nit-pick yet even more, perhaps I might find the now-electronic gear-lever just slightly lacking in true nautical heft. Also sometimes, and by that I mean 11.43am when the sun is all but right above, there can be too much bling. 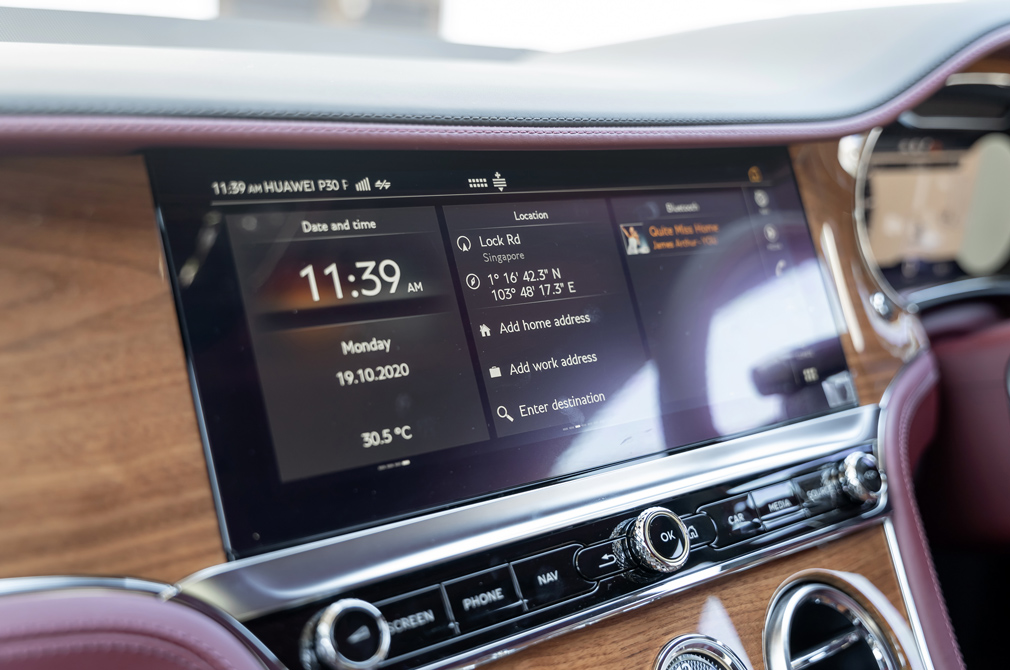 The aggressive glinting of the myriad silver bits on the steering wheel and centre console can be hard to ignore.

Basically, though, the Bentley Continental GT V8 is a fantastic place to be. The 20-way adjustable leather thrones are to die for. The view out, particularly important in a patently sporting machine, is excellent.

Every surface is so beautifully knurled, stitched, quilted, and rendered that possibly the ugliest thing in the car is the image in the vanity mirror. I do not think that’s Bentley’s fault.

A GRAND TOURER ON A SMALL ISLAND

The biggest problem with GT cars designed to consume continents is that in the smaller confines of a city like Singapore, they can feel like bulls in a china shop.

The similarly sized Aston Martin DB11 and Ford Mustang certainly do suffer from Bazooka-in-a-knife-fight syndrome, inflicting a bit of nervousness on their pilots. Not so in Bentley-land.

For starters, all that gloriously baritone firepower is deployed with no small amount of restraint and grace. Stopping and going from a standstill is a viceless undertaking despite the monolithic mass.

On the go and jousting with Priuses, the big Bentley conjures the magical power Great Shrinkage. Whether devouring huge distances on big highways or threading the proverbial needle through rush hour traffic, the Conti GT is always at ease.

The presence of a sport mode is itself instructive of the brand identity; you never deign to find such a button in a Rolls-Royce. It’s easy to forget that the two marques are actually quite different in heritage and mission. 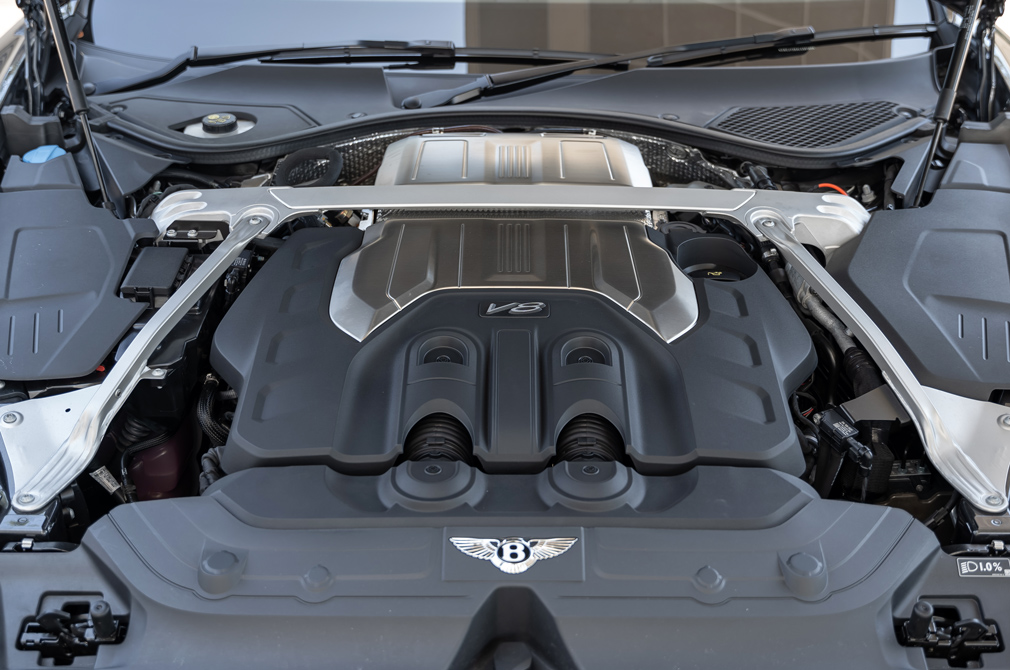 Twin-turbocharged V8 delivers 542hp and 770Nm, along with a century sprint time of 4 seconds.

There is racing in its blood, and so Bentley does more than aristocracy. It does aristocracy with attitude, agility, aggression, and athleticism. I do alliteration.

So configured, or even left in all-things-to-all-situations Bentley mode, there is a delicious lively edge to the Continental GT. Throwing the steering wheel in a deliberate attempt to make the car heave clumsily onto its bump stops fails to provoke misbehaviour.

It is as if Alfred the immaculate butler is always at hand to apply a firm but silken gloved hand to this Bruce’s tantrums.

A distinct rear bias is perceptible in the turns. While it’ll take far more aggravation that what I dared to apply on a crowded Pasir Panjang Road to overwhelm the massive 265-section Pirelli P Zero rear tyres, the sense of balance is there to suggest that given a broader and emptier canvas, you might be a hooligan yet in this thing.

Not many owners will, but the sensation is there, present and correct. It feels great.

The Bentley Continental GT V8 is, ultimately and to its credit, no Porsche or Aston or BMW M. Comfort on the move is therefore exemplary. 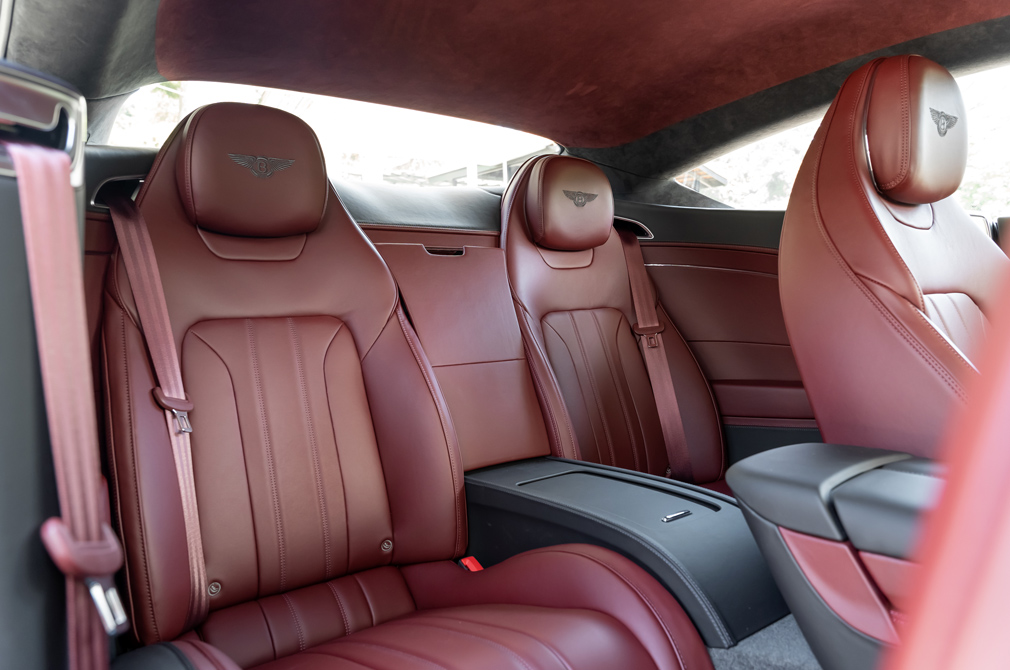 Along the very worst stretches of road all you hear are the distant and quite satisfying thumps of the world’s imperfections being smothered with a golden pillow.

I thought I heard a clank from beneath the undercarriage. How unbecoming. But it turned out to be my phones whacking against each other. Less Adidas Predator and more tweed sport coat, the needle points a little closer to touring than race.

GT AS A DAILY DRIVER

All told, the Bentley Continental GT V8’s breadth of ability is simply astounding, and is the car’s most abiding quality.

The first two generations evolved significantly over their long run, going from Wayne Rooney’s bling-tastic car to being a legitimate gentleman racer through its many increasingly capable iterations.

Somehow, every moneyed household seems to have one, and daily-drive it the way one would not quite a Wraith or McLaren. Seriously, go take a drive down Cluny road and creepily peer through every gate. Not everyone has a Ferrari, but there are countless Contis.

Think of it as a rich person’s Golf GTI. Today the brief remains the same: deliver superlative performance without ruffling its occupant’s impeccable dinner attire.

In this new iteration is a beautifully judged design and engineering effort. Job done, methinks. 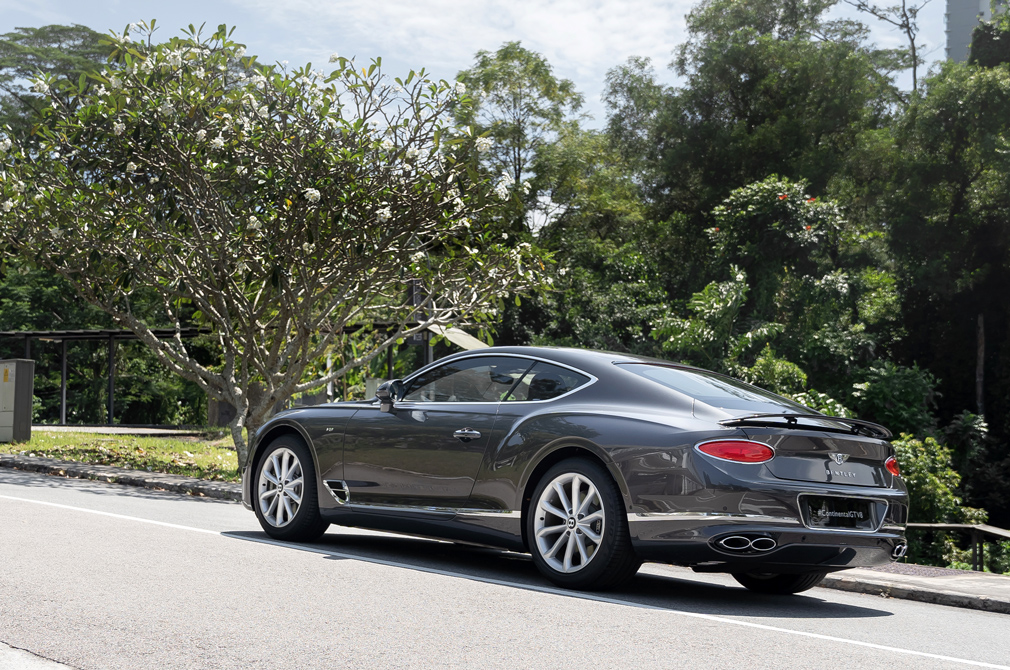