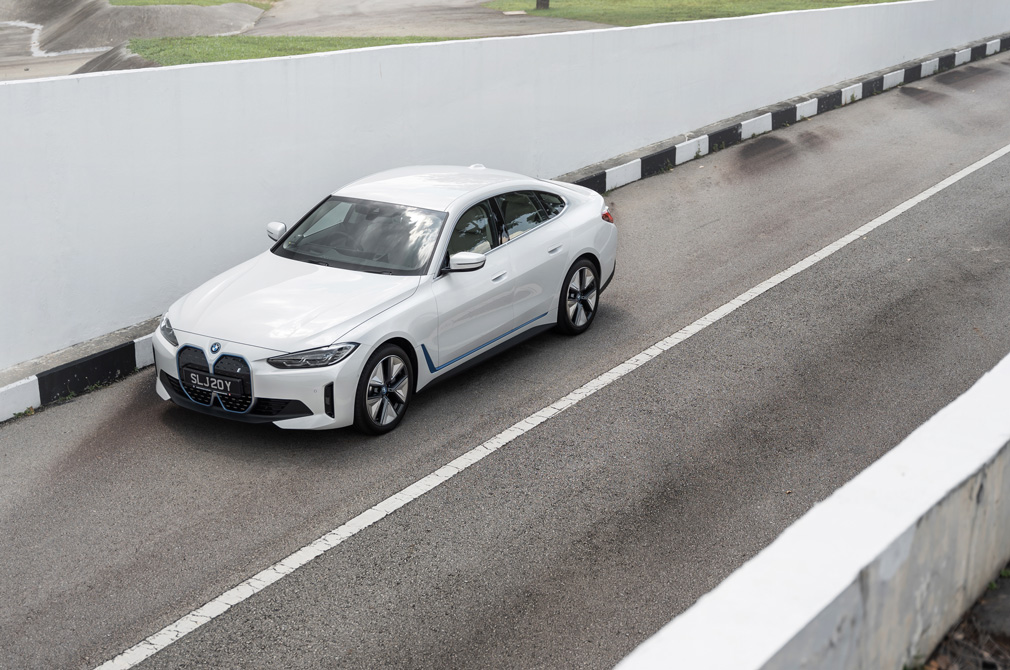 The common thread that links all 4 Series models is their fluidity. From the Coupe to the Convertible to the Gran Coupe, BMW has given the 4 Series the ability to “flow” through corners. And it is instinctive, too.

This trait even extends to the extremely rapid M4 Competition. Despite its huge performance, its movements are seamless.

Contrast this to the M2 and M2 Competition models, which prefer the pilot to “point and squirt”. Point its nose in the intended direction and give the throttle a “squirt”, and the compact coupe, with engine growling and tyres ablaze, attempts to sear its tyre marks into the tarmac. It’s fun, manic fun.

Manic is how some high-performance EVs can be described, too. After all, with their ability to deploy instantaneous power, these cars are ideal for drivers who enjoy stabbing and stomping on the accelerator pedal.

An electric 4 Series then, could have ended up feeling frantic. Luckily, BMW engineers have kept this in check to retain the model’s fluid nature. The i4 is not an “electrified 4 Series Gran Coupe”. It was designed from the beginning to be an electric vehicle.

Its batteries, just 110mm tall, are housed in the floor, giving the i4 a centre of gravity 53mm lower than that of the 3 Series. The net battery capacity is 80.7kWh, which gives the car a maximum range of 590km.

Now, while the i4’s overall look is similar to that of a 4 Series Gran Coupe, it has unique i Blue accents, blanked-off kidney grilles and aero-optimised wheels. The lack of exhaust pipes are another hint to this fastback’s electric nature.

Also highlighting the car’s advanced character is its interior. While other 4 Series models still use BMW’s Operating System (OS) 7, the i4 is equipped with the brand’s Curved Display. 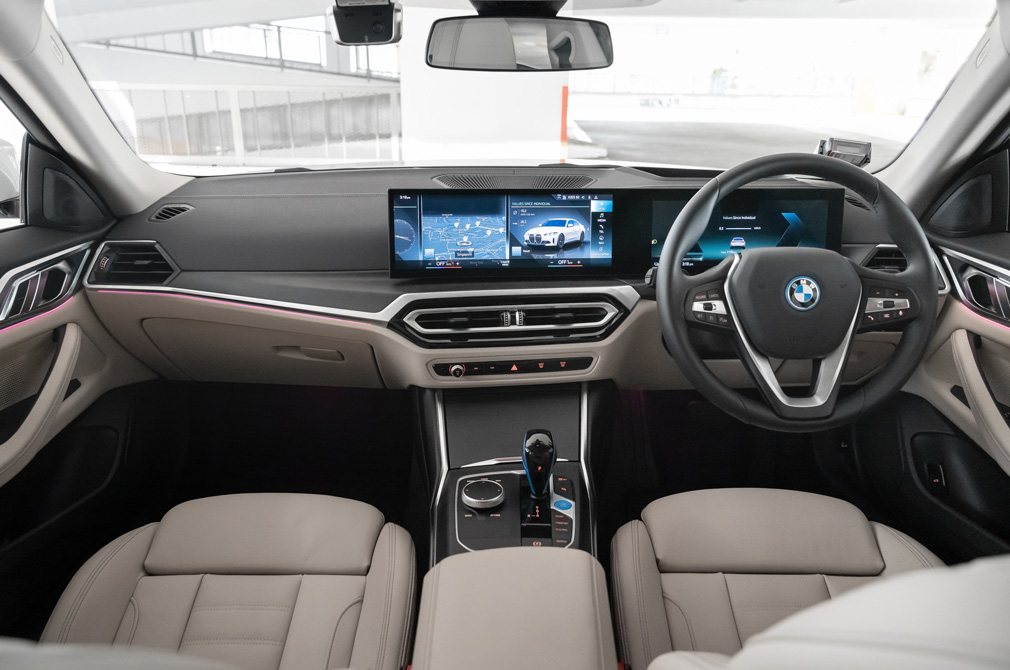 Powered by OS 8, the Display integrates the 12.3-inch instrument panel and 14.9-inch infotainment screen into one long screen.

New users will need to spend a good amount of time learning OS 8’s new menu layout, but once you get used to it, you won’t want to return to OS 7.

The i4’s steering wheel helps in this regard – it still has the same controls that current-model BMW owners are used to. The learning curve would’ve even steeper if the irregular-shaped steering wheel from the iX had been used.

The rest of the car is similar to the 4 Series Gran Coupe. Backseat room is decent, and the large capacity boot offers 470 litres with the rear seatbacks upright and 1290 litres when they’re folded. 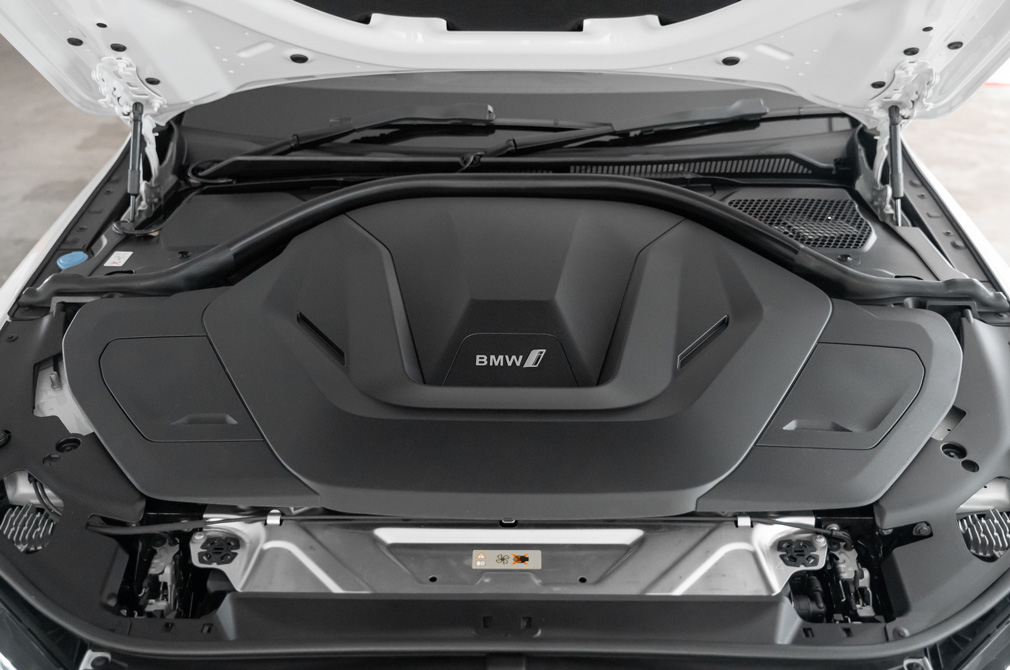 Hauling in a hurry is possible thanks to the i4’s fifth-generation eDrive drivetrain, which produces 335hp (340PS) and 430Nm. Don’t just remain focussed on the figures, though, for the real kicker here is that they can be unleashed at the drop of a hat.

In fact, such is the immediacy of the response that you needn’t bother with Sport mode unless you’re alone on a back road or on a racetrack. Even in the Comfort setting, the drivetrain’s readiness to pull the vehicle forward is plenty.

In Sport, be prepared to have your head snapped back if you plan on being first off-the-line. There’s no need for this on normal roads, as the i4’s century sprint time of 5.7 seconds is something most cars cannot match.

Ah, but the i4’s real talent isn’t making short thrusts to plug gaps in traffic. It can, but it’s in its element when you’re threading your way through corners. 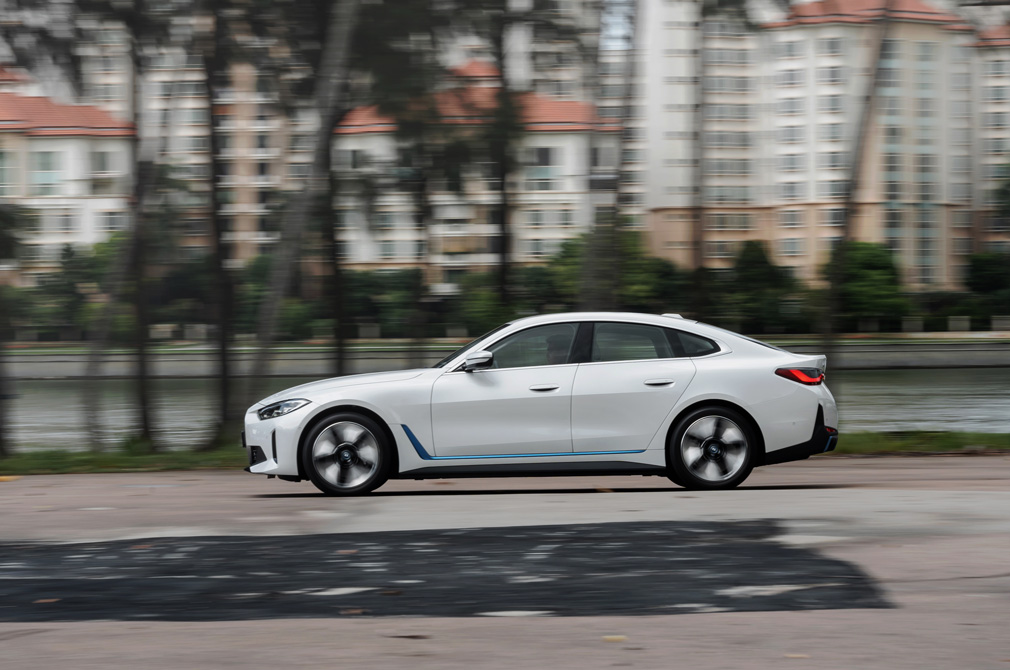 One thing you will need to do first is to set the Recuperation level to “Moderate”, so as to eliminate the sudden lurching associated with strong regenerative braking.

In this manner, it’s easier to set the car up for a positive corner entry. Lift off the accelerator, feel the recuperation kick in, brake moderately and before you know it, the nose has glided around the apex and the car is ready for its next electron infusion.

FOR A “MODERN” DRIVER

The i4 eDrive40 handles well and I imagine the even more powerful i4 M50 should be even sharper (and quicker).

However, from a more traditional enthusiast’s point of view, the i4 lacks the drama delivered by an equally enthralling soundtrack. I won’t blame Hans Zimmer, but not having a sporty sound to accompany my drive makes the experience relatively dry.

It’s like watching The Expendables with the Volume on Level 1. There’s plenty of action to keep your adrenaline flowing, but you need to hear the gunfire and explosions for added punch. Silence is the nature of EVs, but surely exceptions can be made for models like the i4.

Perhaps BMW wishes to appeal to the younger generation of drivers – those who are only keen on an EV and/or who have never driven a car with a throaty straight-6 engine.

But though such an experience may be unfamiliar to them, they’ll be right at home in the i4, whose fluidity and electric drivetrain will instinctively appeal to them as drivers. 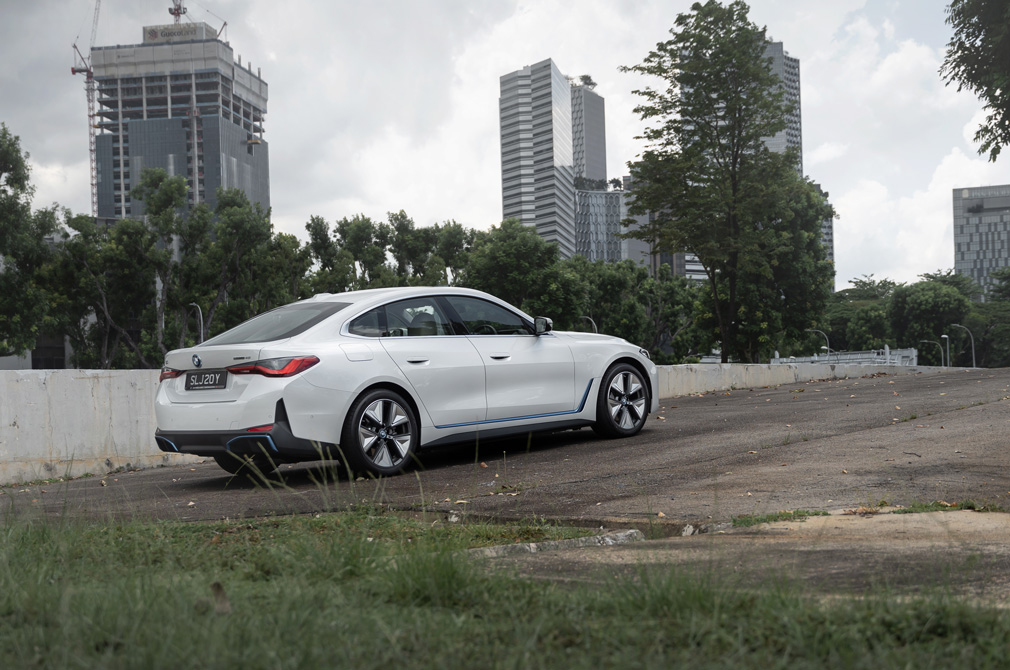