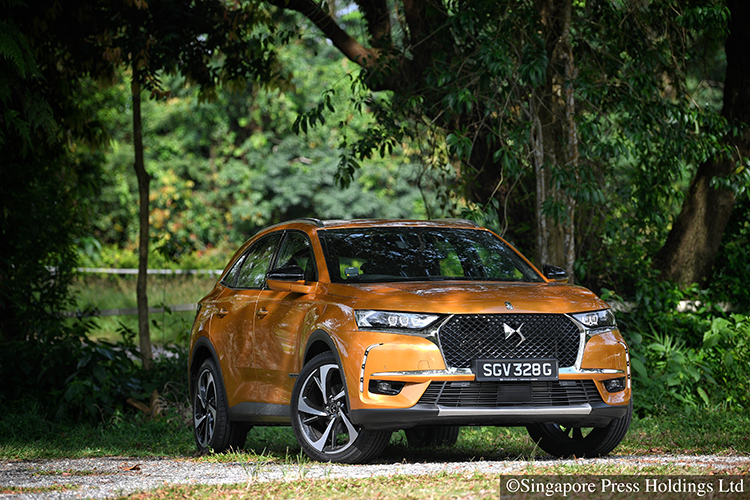 While brands like BMW and Porsche have made their full-sized sport utility vehicles (SUVs) seem smaller than they are – by way of design wizardry – Citroen’s luxe division has made its latest mid-sized DS 7 Crossback bigger than it actually is.

The French crossover-ish five-seater is a mite smaller than Audi’s Q5, but appears almost as imposing on the road as its Q7.

With a brash mesh grille flanked by LED headlamps (with individual cells that swivel into position as you unlock the car) and a front bumper designed like the swooping mouth of a manta ray, the car holds its own among its most stylish rivals – especially when dressed in turmeric gold, its signature colour.

At nearly $180,000, it may seem the DS 7 Crossback is priced according to its surface area, which, despite its rather compact footprint, is actually surprisingly substantial.

But the French carrier is quite a lot of car for the buck too.

The cockpit and centre console are right out of a concept car – ultra-modern, with an immense touchscreen to access functions from mood lighting to five-mode massage seats to more mundane things such as navigation and sound system.

(Actually, the hi-fi is not mundane at all. The Focal system, with a subwoofer beneath the floorboard, is among the best sampled here.)

Occupants in the second row are not left out.

The right and left seats can be reclined at the touch of a button. Passengers here get their own climate control console too. 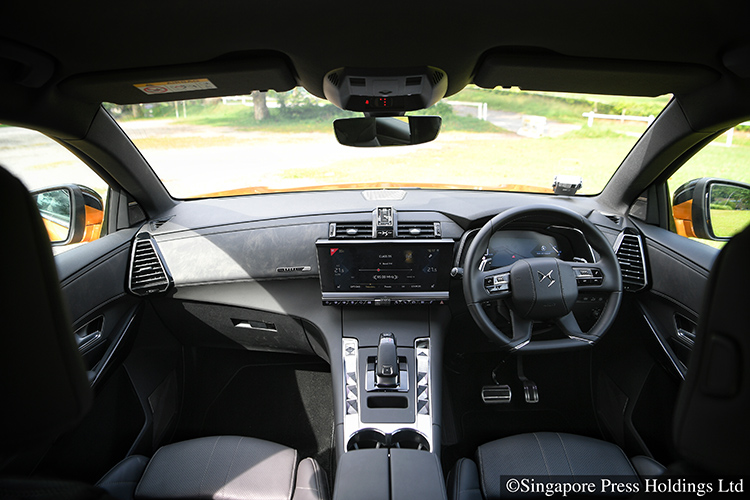 DS 7 touchscreen is where you access functions such as mood lighting and the five-mode massage.

The only thing which does not gel with the extravagance is the rear door hinges, which appear rudimentary and a tad flimsy.

But the DS 7 Crossback more than makes up for these.

At the helm, the driver gets a plush steering wheel. There is adaptive cruise control with lane-keeping assist. Parking assist is also on hand.

But if you want to park manually, the car’s 360-degree camera system makes the manoeuvre a cinch.

Most impressive, though, is the car’s active suspension, which is modulated by a high-speed camera and a battery of sensors.

It is active between 12km/h and 112km/h, and in all drive modes except Eco.

On the go, the DS 7 Crossback has a gliding motion which is soothing, but not overly soft.

Its drivetrain is equally impressive.

Although its 1.6-litre turbo is familiar, it is reworked to push out an incredible 225hp and 300Nm.

The massive output powers the front wheels via an unobtrusive 8-speed autobox, sending the DS 7 Crossback from rest to 100km/h in 8.9 seconds and onto a top speed of 236km/h.

A more bristling performance could have been attained with 300Nm, but the DS 7 Crossback is tailored for easy progress rather than outright punchiness.

It is brisk, but affords a drive which is calming – a trait you will find in a big-capacity cruiser with ample reserves.

The fact that Citroen has managed this with a 1598cc power plant is nothing short of astounding.

And with enough features and furnishing even a Bentley owner might approve of, there is very little not to like about the car.