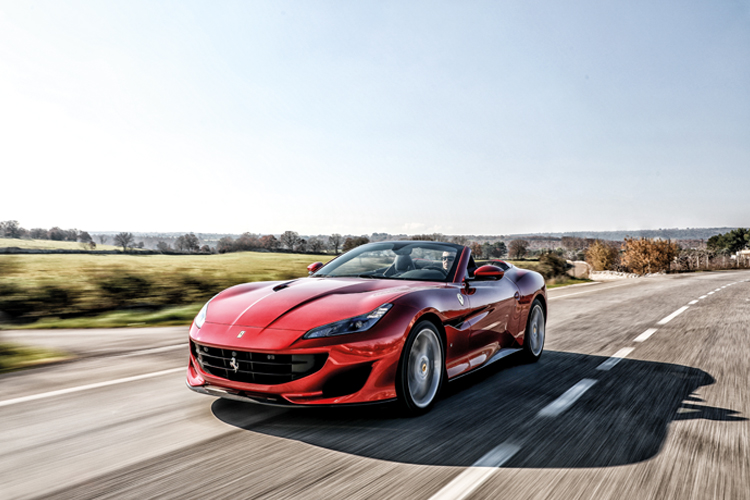 The Ferrari Portofino may “only” have 600hp, but one does not have to be driving at illegal speeds to enjoy it.

When Ferrari introduced the California convertible in 2008, its aim was to entice new buyers to the marque by offering a less hardcore model, albeit one powered by a naturally aspirated 4.3-litre V8.

In 2014, the California was replaced by the California T, which has a smaller but more powerful turbocharged 3.9-litre V8. Seventy percent of buyers of these two models were first-time Ferrari owners, which indicated that the Prancing Horse was on the right path.

Replacing the California T is the Portofino, which takes its name from a pretty fishing town on Italy’s west coast. It is interesting how the name of an Italian fishing village sounds more seductive than a US state. 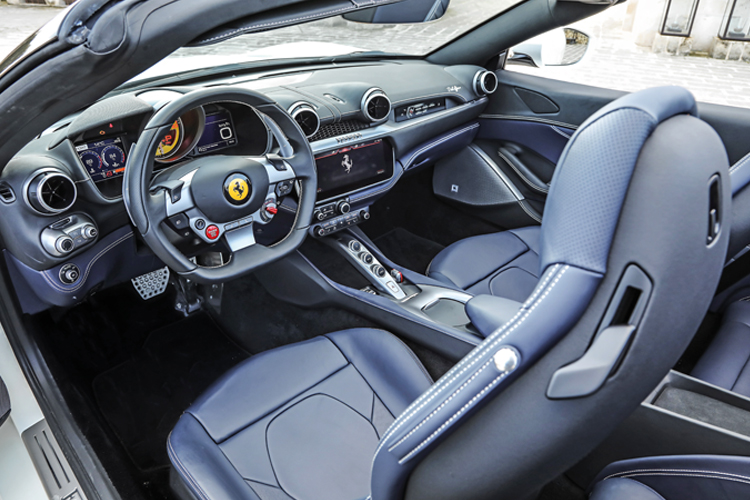 Ferrari Portofino’s cockpit is similar to the Ferrari GTC4Lusso T’s, with a desirable mix of technology, luxury and sportiness.

The California T was criticised for its lack of aggressive looks, so the designers gave the Portofino a more purposeful appearance. The resulting design bears more than a passing resemblance to the F12berlinetta.

The Portofino’s styling also lowers the drag coefficient to just 0.31, or a 6 percent improvement over the previous model. The airflow beneath the car was optimised to enhance brake-cooling and generate more downforce. 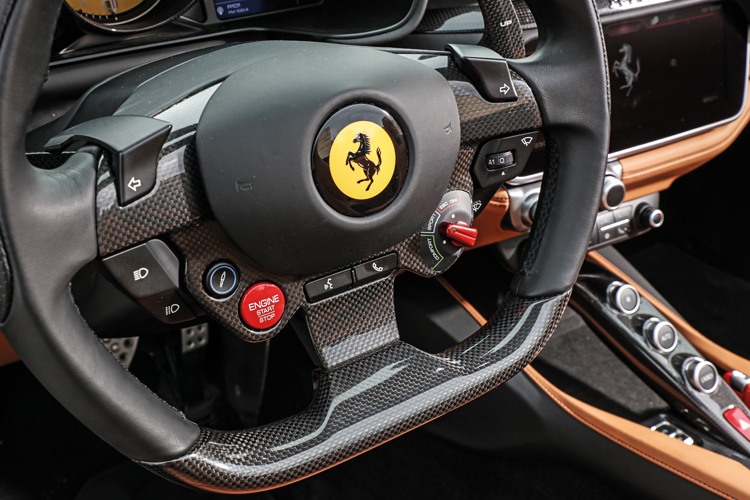 The Portofino doesn’t produce as much downforce as Ferrari’s other sports cars, but the 40kg it develops at 200km/h without any wing elements is nothing to sneeze at.

To achieve this figure, Ferrari designers ensured that the air flows through the body, rather than around it, to generate the desired aerodynamic results. 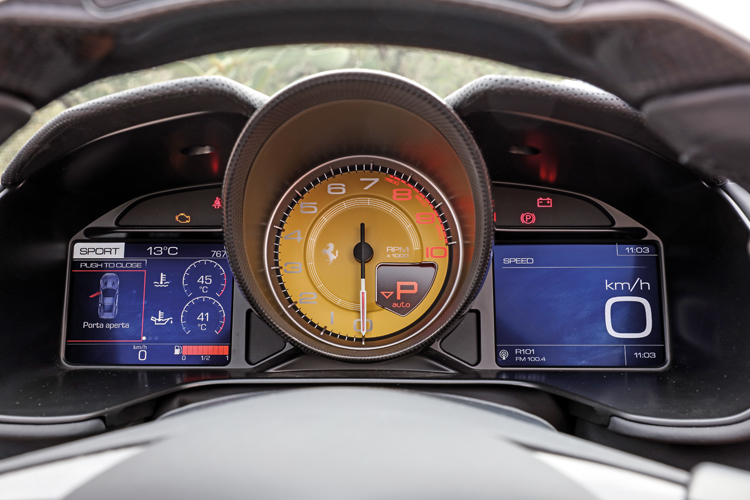 For instance, if you inspect the headlights closely, you’ll see vents beside their housings that lead air into the wheel well to cool the brakes. On each of the front fenders, there are vents which extend to the doors that extract the air from the wheel wells, thereby reducing front axle lift.

Like the California T’s roof, the Portofino’s hard-top also takes 14 seconds to open or close. The good news, however, is that unlike its predecessor, which had to be stationary, you can operate the Portofino’s roof while the car is moving at speeds of up to 40km/h. 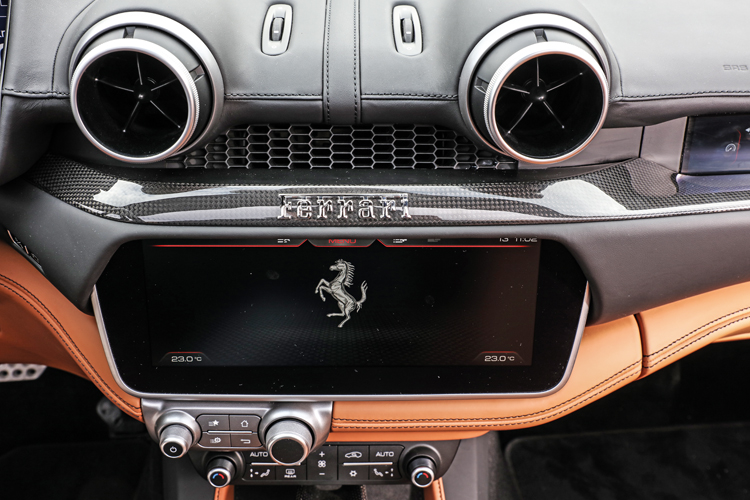 The Portofino’s cockpit is similar to the GTC4Lusso T’s. That’s not a bad thing, though, since this generation of Ferraris have prettier interiors compared to the models from past decades.Getting this right isn’t easy. There are a lot of tech bits that need to be integrated into a luxurious design, but at the same time, it must remain driver-focussed so that it will not hamper pilots with harder driving styles.

Thank goodness the instrument cluster continues to be dominated by an analogue tachometer that’s flanked by two high-contrast LCDs. These additional screens are the best way to display the wealth of information generated by the car’s systems. 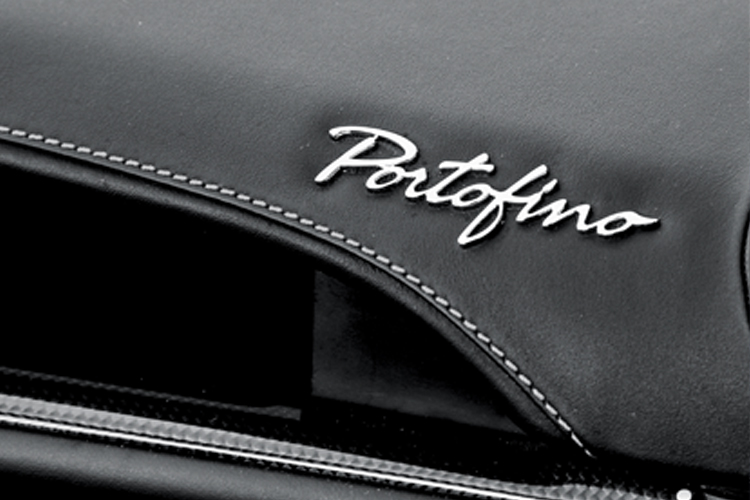 The 10.25-inch infotainment display is similar to the one in the GTC4Lusso T. The Portofino also has the same additional screen for the front passenger to see the car’s speed, engine revs and gear selection.

It is clear that Ferrari is trying to make the interiors of their cars more luxurious and comfortable. The Portofino’s cabin is quieter than the California T’s with the roof closed, but when it’s open, the new wind deflector dramatically reduces draughts. Small touches, such as the almost rimless rear view mirror, show how much the designers sweated over details. 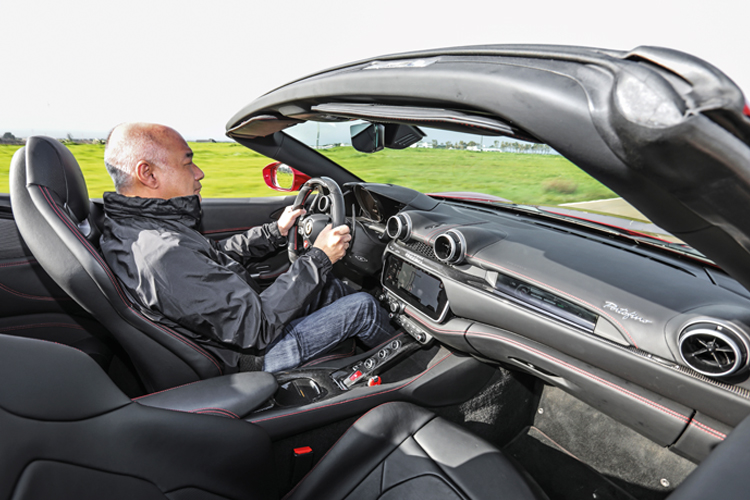 The Portofino’s turbocharged 3.9-litre V8 develops a heady 600hp, or 40hp more than what the California T produces. The power increase was achieved by carefully optimising the combustion characteristics inside the cylinder heads.

Because the power peaks at a relatively high 7500rpm, the driver can still rev the V8 as if it were naturally aspirated. The Portofino’s powerplant isn’t quiet, but it also isn’t as effusive as Ferrari’s naturally aspirated engines.

Indeed, sorely missing is the characteristic “war cry” from the exhaust. Even Ferrari cannot reconstitute what is attenuated by the two turbos in the path of the exhaust plumbing. 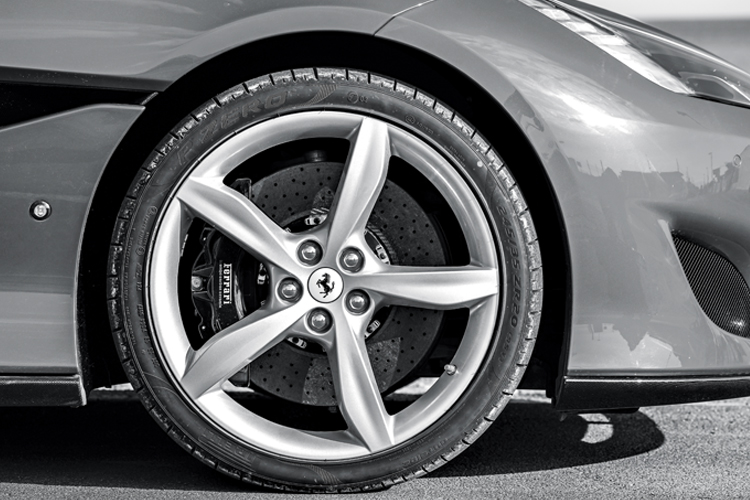 Of course, the Portofino is supposed to be more of a gentleman – a socially responsible Ferrari that won’t annoy your neighbours if you come home in the wee hours.

The F154 bi-turbo V8 engine is the same one found in the GTC4Lusso T, where it is tuned to produce 610hp. 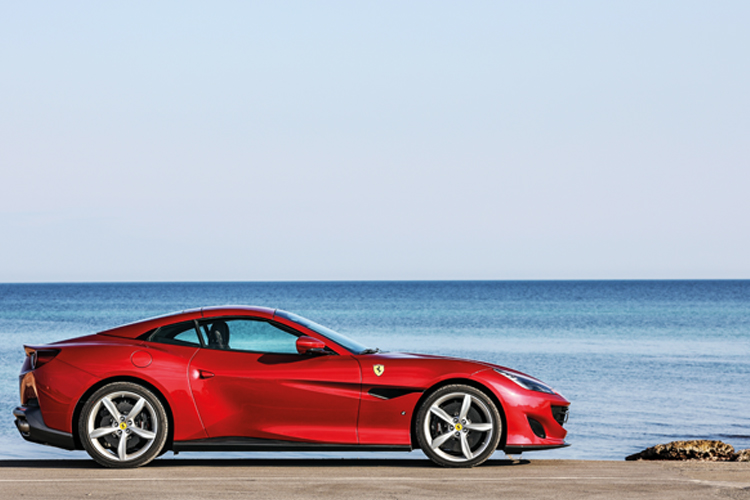 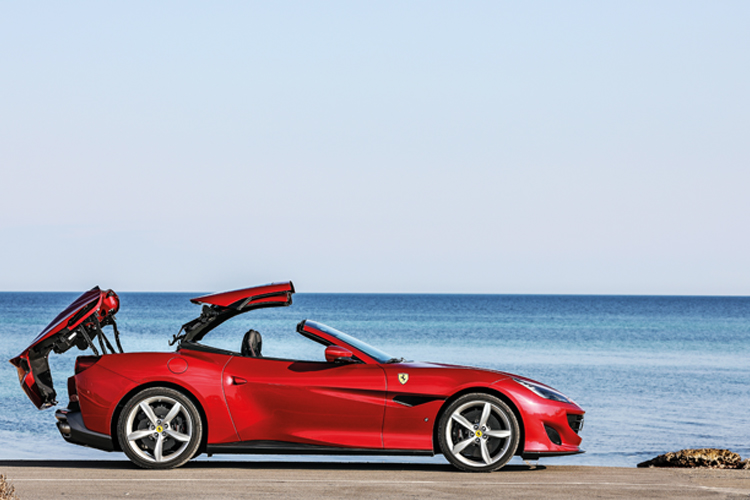 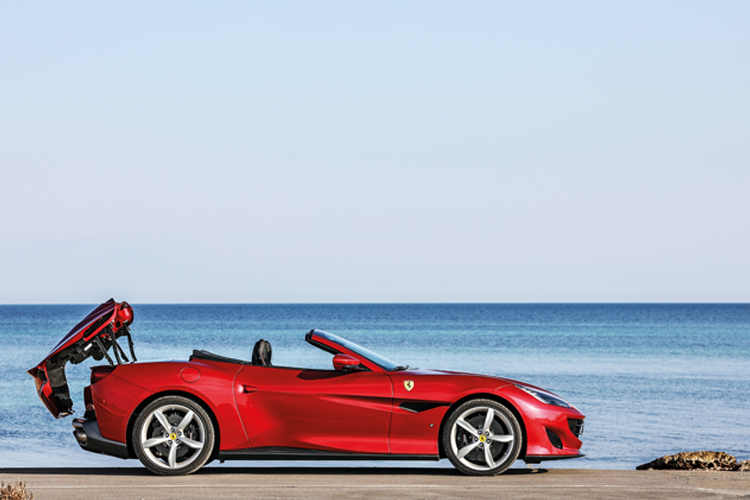 Ferrari Portofino’s folding hard-top opens/closes in 14 seconds, but more importantly, it can now be operated on the move.

That said, the Portofino performs the century sprint a tenth of a second quicker than its California T predecessor, and its top speed is 4km/h higher as well.

My test car is equipped with the optional SCM-E system of magnetorheological dampers, standard in more expensive Ferrari models. Compared to the stock suspension, SCM-E has spring rates that are 15 percent stiffer in front and 19 percent stiffer in the rear.

This enhances the Portofino’s agility and responsiveness, as the dampers rapidly control body movements, while still delivering an acceptable ride.

Complementing SCM-E are the new Pirelli P Zero tyres which were developed together with Ferrari engineers, whose focus was on improving handling and wet grip.

The Portofino’s electric power steering is a pleasant surprise. My past experience with other systems has shown that they typically have little or no steering feel compared to their hydraulic equivalents. 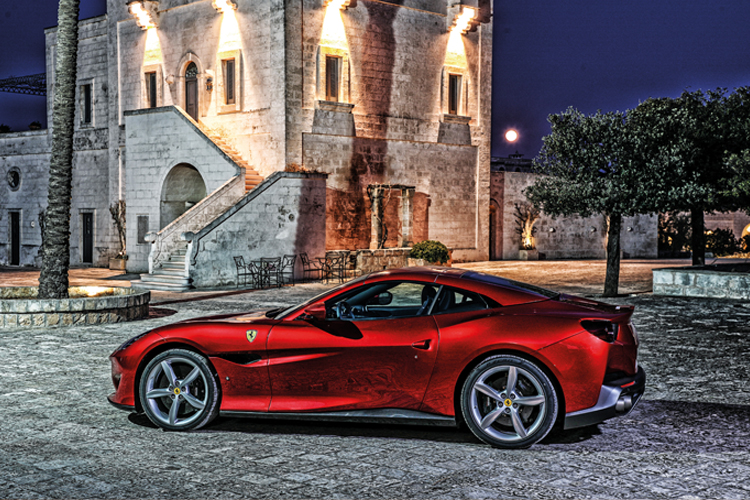 However, kudos to the Ferrari engineers for carefully mapping out the steering assistance level – their efforts have preserved and developed a semblance of steering feel.

The result is a helm that not only feels much better than the California’s, but also comes close to the steering of the 812 Superfast in terms of communication.

Without all-wheel-drive, Ferrari engineers had to work harder to put all the power to the road to achieve competitive acceleration rates. The Portofino’s F1-Trac and E-Diff 3 systems really have their work cut out for them.

Torque delivery within the first three forward gears increases progressively, with the maximum 760Nm only available from fourth gear onwards. This disguises turbo lag and also helps prevent the turbo boost from overwhelming the tyres and electronics.

One piece of technology missing from the Portofino’s armament is a rear-wheel-steering system.

Ferrari claims that with the firmer and sharper suspension, it was not needed. Moreover, since the Portofino is a smaller car, its manoeuvrability in tight spaces is not a huge issue. 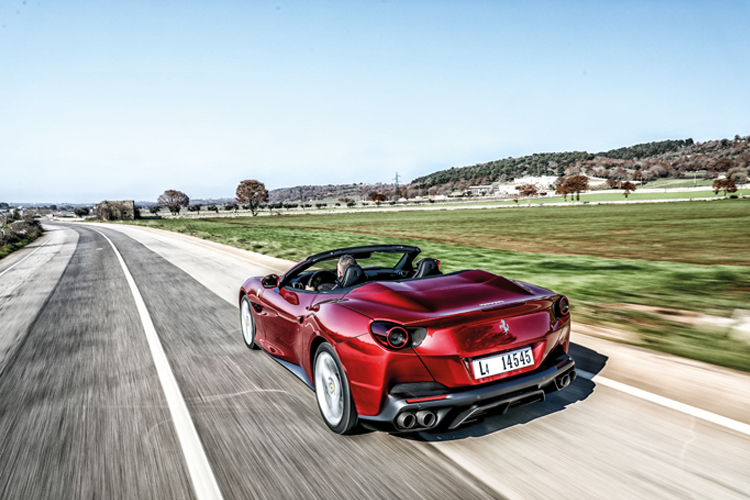 Ferrari Portofino’s steering not only feels much better than the California’s, but actually comes close to that of the Ferrari 812 Superfast.

If you were hoping for the Portofino to deliver a magic carpet ride, you’ll be disappointed. After all, this convertible is still a Ferrari, and its handling is also aided by the 35 percent increase in body rigidity over its predecessor. That said, the Portofino’s ride comfort is equal to the California T’s despite the stiffer suspension.

The Portofino may be the “entry-level” Ferrari with “only” 600hp, but one does not have to be driving at illegal speeds to enjoy it. With the electric power steering offering a communicative feel, and the absence of a clever rear-wheel-steering system, the Portofino actually delivers a driving experience that is purer than I expected.

Who would have thought that the least expensive Ferrari would actually turn out to be one of the carmaker’s most enjoyable models?

Read about the Portofino’s predecessor, the Ferrari California T