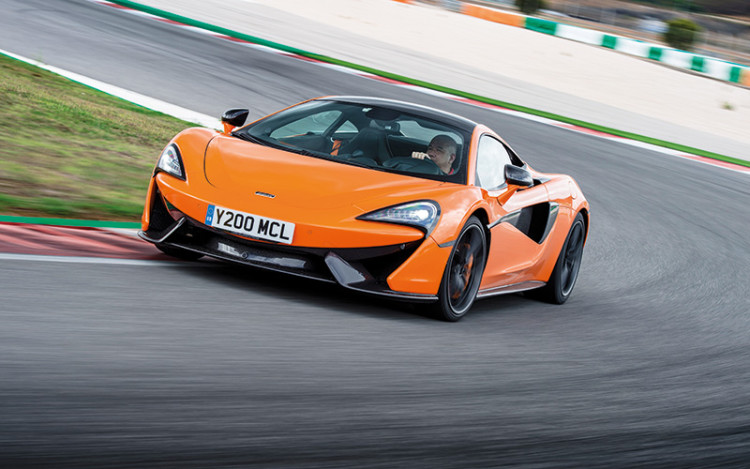 Just when I got used to the rather long name of “MP4-12C”, McLaren replaced it with “650S” and created a three-tier lineup, consisting of the Ultimate Series (P1 and P1 GTR), Super Series (650S and 675LT) and Sports Series (540C and 570S). The numerals refer to the respective horsepower figures.

At first glance, the entire lineup looks alike, right down to the dihedral doors. But as petrolheads like myself get familiar with the make and models of McLaren, we can see the design nuances – like how we can discern one 911 variant from another.

Though the different “Macs” share similar profiles because of their common platform and roofline, McLaren has done away with active aerodynamic aids on the 570S, which doesn’t even have a rear wing of any kind.

There is just a lip spoiler to create laminar separation at the tail, as all the downforce comes from ground effects generated/balanced by the deep front splitter-spoiler and complicated rear diffuser.

Compared to the 650S, the 570S has less than half the total downforce, amounting to about 100kg. While useful, that figure does not dominate the car’s handling at higher speeds.

McLaren claims the cabin is longer and wider than that of the 650S, but it’s hard for me to tell. What’s obvious is the easier entry/exit, courtesy of the dihedral doors’ more upwards and forward arc, and the 80mm lower sills of the MonoCell II carbon fibre chassis. These “conveniences” should be considered for the successor to the 650S.

The carbon tub weighs just 75kg, but it’s still 6kg heavier than the one used for the 650S, with the extra weight due to the reinforcement required where the tub narrows to provide clearance for one’s shoes.

The interior design is similar to the 650S and just as functional, but it has been simplified for the 570S. 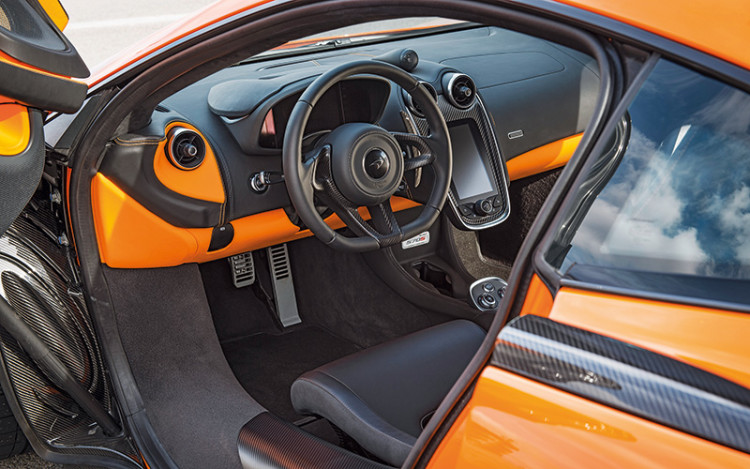 There’s a central 7-inch multi-function touchscreen that handles all the usual settings for air-con, infotainment and navigation. The driver’s LCD instrument cluster is more interesting, with its three zones displaying related driving data and relevant information.

In Sport mode, the LCD screen shows the gear selection, which is prioritised (with bigger numbers and brighter colours) over vehicle speed at the centre of the rev counter.

In Track mode, the display changes to show a racecar-inspired tachometer that presents just the vital info – lap times on the left and tyre pressures on the right.

The 570S comes as standard with the same humongous carbon-ceramic brakes as the 650S. They measure 394mm by 36mm at the front and 380mm by 34mm at the rear, with 6-piston callipers and 4-piston callipers respectively. Their stopping power is phenomenal.

The suspension system has been simplified to the point of being conventional.

Gone are the interconnected Proactive chassis control and criss-crossed hydraulics of the 650S, with the 570S having conventional coilovers and three-mode adaptive dampers instead.

The springs of the 570S have been uprated to 6.5kg/mm and 10kg/mm for the front and rear respectively, which is a jump from the 5.5kg/mm springs of the 650S. The newcomer has also swopped the Z-bar that links the rear wheels of the 650S for a more common anti-roll bar, with a distinct bias towards the rear to reduce understeer.

The twin-turbo 3.8-litre V8 (codenamed M838TE) made by Ricardo is basically the same as the one powering the 650S, but tuned to supply 570bhp. 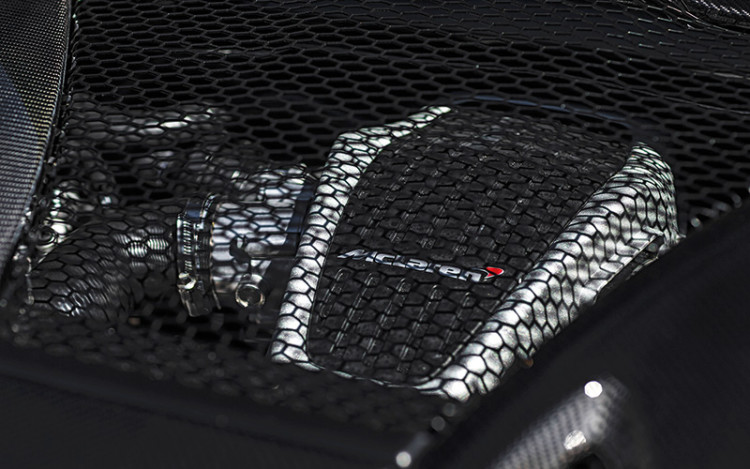 The components (especially those related to the engine’s turbocharging, plumbing and cooling) have been engineered to take the heat of 570 horses and nothing more, so be warned, all the owners/modders who think they could just do a remap to 650bhp and get a bargain “650S”.

The surge of power is less frenetic and more manageable in the 570S, giving the driver a bit more time to process the sheer pace and enjoy it even more.

Both the hardware and software of the 7-speed dual-clutch SSC (Seamless Shift Gearbox) in the 570S come from the 650S. Recalibration of the algorithms provides smoother shift transitions for daily driving, yet the transmission still gives full-bore thumps during gearchanges in Track mode.

On open roads, there is little to separate the 570S from the 650S, except at the very edge of the performance envelope where the 650S would continue peaking in terms of acceleration and grip. Driven sanely, the 570S shines, and with maximum torque of 600Nm, instead of the 680Nm in the 650S, there seems to be less turbo lag, too.

This machine doesn’t strain at the leash all the time, but if you deploy the full fury of the 570bhp, you’ll be pinned to your seat in a sustained manner.

McLaren’s electro-hydraulic steering system in the 570S is the best in the business today – razor-sharp, full of feel, and with a superb sense of connectedness. Interestingly, the rack ratio of the 570S is quicker than that of the 650S. 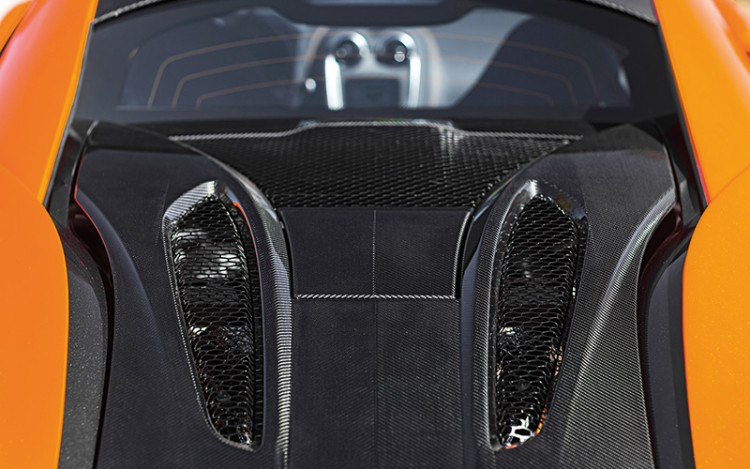 The 570S handles like the 650S, but in a more user-friendly fashion and with less absolute grip, due to the less “forceful” downforce and the narrower P Zero Corsa tyres. But the handling limits of this coupe are still very high and ready to be explored.

The stiffer springs mean a firmer ride, but it’s not uncomfortable. The damping has three different settings: Normal, Sport and Track. The first mode is okay for city driving, but a tad too soft for twisty roads. The second mode is the best compromise in my opinion, while the third is surprisingly bearable and therefore acceptable for speedy street use.

On the sinuous mountain roads that surround Portugal’s Portimao circuit, the 570S is a very precise instrument with which to carve out the switchbacks. It’s completely obedient to the driver’s steering, and its turbo V8 power is both elastic and heroic.

Portimao is a very difficult racetrack to learn, with several blind crests/turns and numerous elevation changes.

With the car’s electronic nanny switched off completely, I tried some second-gear oversteer in the tight corners to see if the brake-controlled rear differential can deliver smooth powerslides like a proper e-diff. It can.

However, the 570S prefers to be driven within its considerable traction envelope. Indeed, the electronics and dynamics “hold” the coupe closest to its neutral cornering line every time.

Driven just right, the car has a natural flow, and all its controls feel perfect in their weightage and response.

Priced below the million-dollar mark (without COE) in Singapore, the $899,999 McLaren 570S is more affordable than the $1.145 million 650S. Yet, it punches way above its weight, just like another formidable contender in the sub-$1m price range, the new Porsche 911 Turbo S. 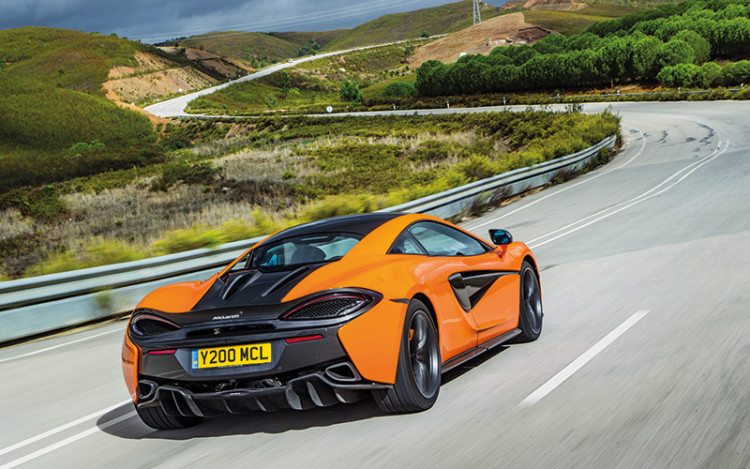