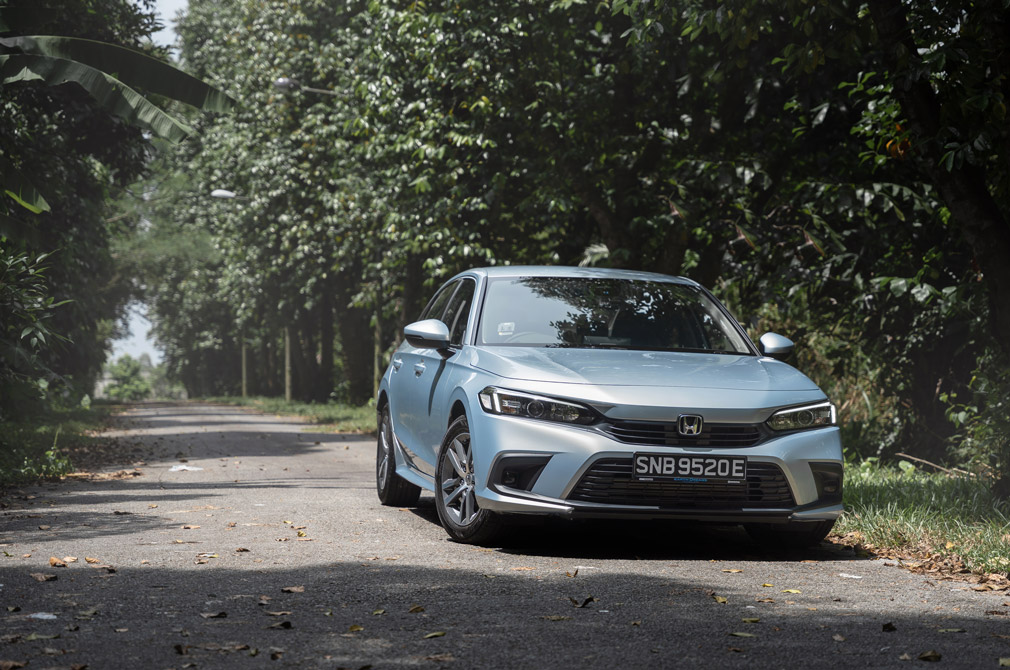 The Honda Civic has always been more than just a family saloon.

It is supposed to be a bread-and-butter sedan and should be boring, by all accounts. But the Civic always delivered more than expected. It didn’t just drive nicely – it drove well and handled better than most rivals.

Going by their numbers, two of the most popular Civics here are the FD (eighth-generation) and FC (tenth-generation) models. The FD is still acknowledged to be one of the best Civics ever made, with the FD2 Type R remaining close to many petrolheads’ hearts.

The only Civic not fondly remembered is the ninth-generation model. It had shrunk in size, offered less space, and its build quality was not up to Honda’s standards.

And just like today, when that model arrived in Singapore in 2012, COE premiums were rocketing. That made the less appealing car even less palatable.

The 11th generation Civic is also facing this issue. Fortunately, there’s plenty in its arsenal to help it convince buyers. 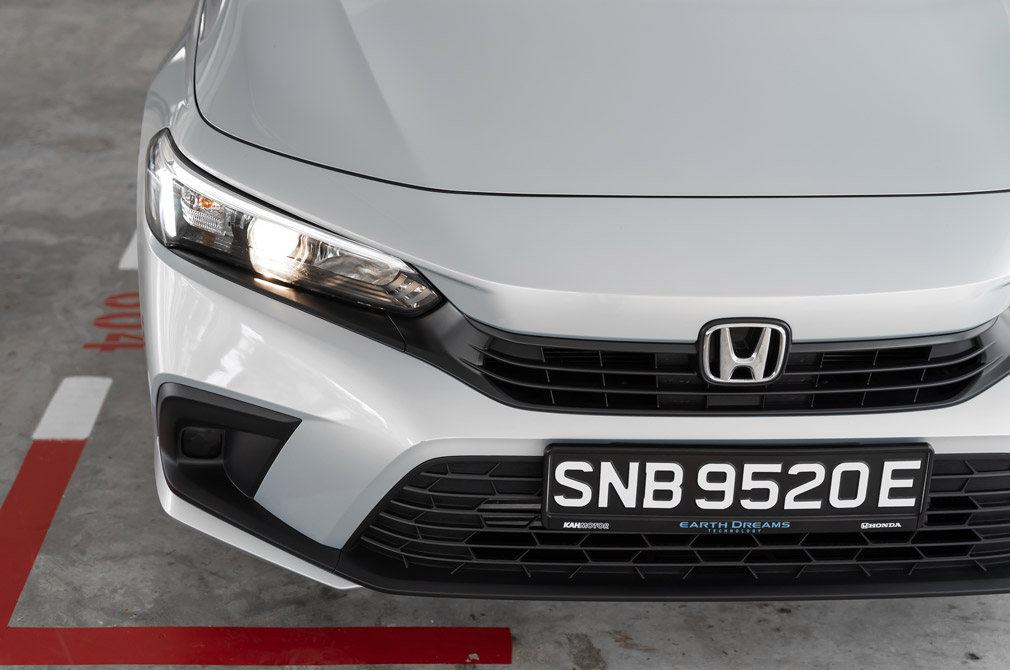 While the previous Civic has more “daring” styling, the latest one looks more “sensible”.

Although its front end is similar to the older one, the new Civic gets more straight lines. Gone are the curvy bonnet and shoulder lines. The A-pillars have also been moved rearwards in relation to the driver, which improves outward visibility.

As a result, the new Civic looks upright and more confident. But I’m not sure if the design will be as striking as the 10th generation’s, especially without those polarising, boomerang-shaped tail-lights.

They were the source of many arguments. But now that the Civic has “regular” tail-lamps, I doubt there’ll be much to discuss in this area. 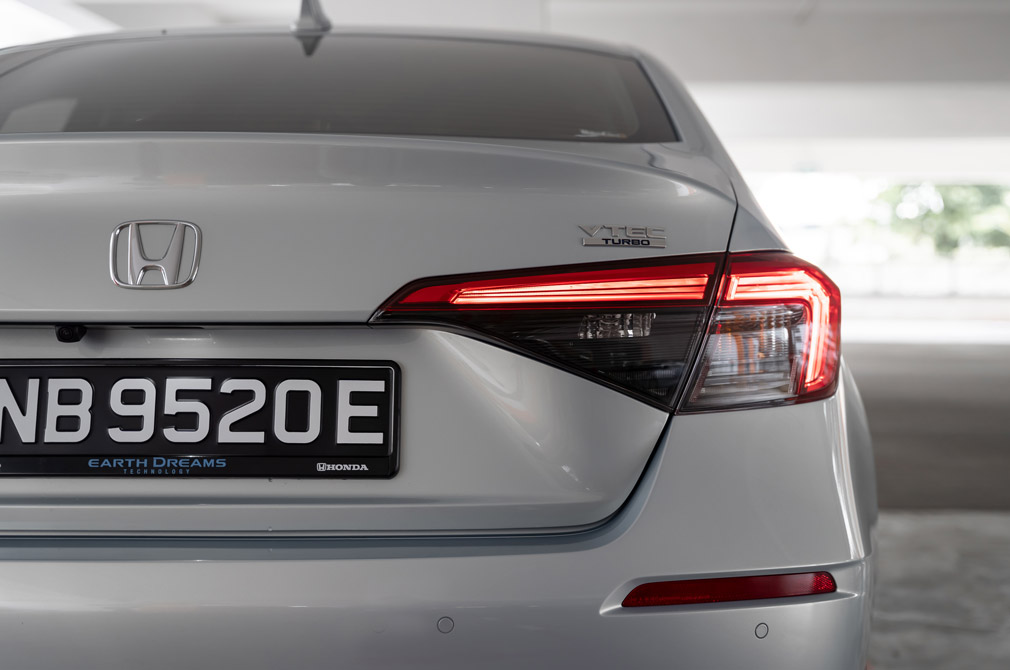 Drivers will definitely have something to say about two things, though: the standard-fit 16-inch wheels and halogen headlights.

While the former probably helps reduce the car’s cost while providing a cushier ride, the presence of the latter is bizarre, to say the least.

Most cars today use LED headlights – even HID (high-intensity discharge) units have gone out of fashion. Within Honda’s local lineup, even the City and Jazz models have LEDs as standard.

A STEP UP… AND DOWN

Honda has taken a sensible and stylish approach to the Civic’s interior and I like it a lot better than before.

Instead of being plain-looking, the dashboard features a honeycomb trim. Behind it are the air-con vents, which are easily adjusted using the little knobs. Everything looks neat without being overly minimalist. 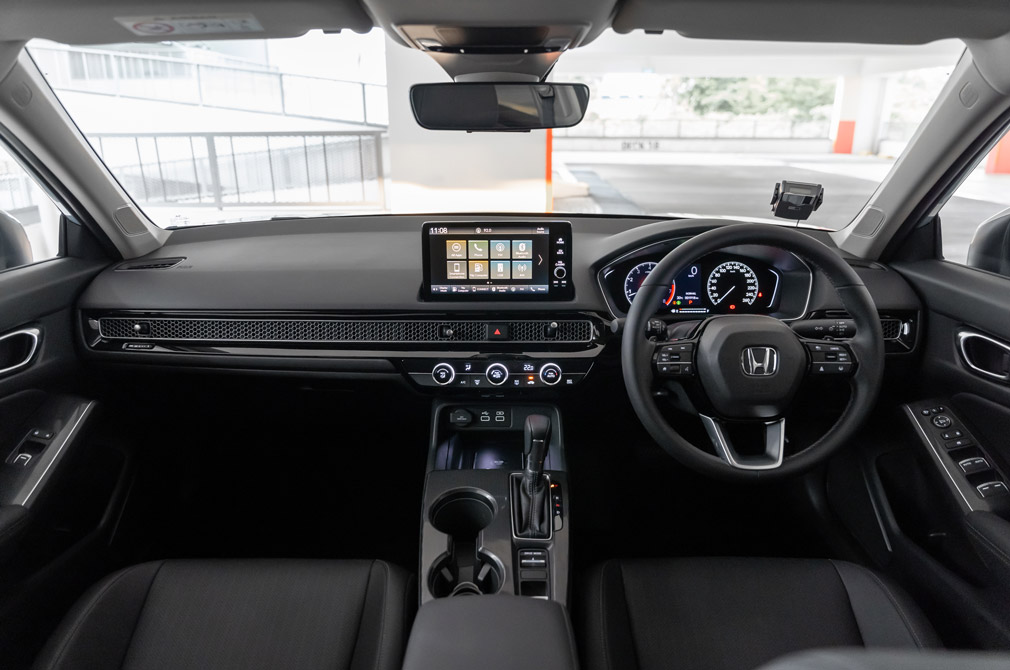 The Civic’s steering wheel looks nicer as well. Its controls have a tidy layout, and the touch-sensitive volume bar is replaced by a toggle, which is much easier to use when you’re driving.

Speaking of steering wheel controls, you’ll notice the presence of Adaptive Cruise Control – one of the many functions of Honda Sensing, the brand’s suite of driver safety and convenience features.

Honda Sensing also includes Collision Mitigation Braking and Lead Car Departure Notification. LaneWatch is standard, too. When you indicate left, the system displays live feed from a camera below the left wing mirror, helping you spot other road users and kerbs.

However, unlike similar systems in Hyundais and Kias that display feed from both sides, LaneWatch literally only tracks one lane – the left one. Honda should have upgraded this system for the new Civic.

Also, the air-conditioning lacks a second climate zone – something that the previous Civic had. 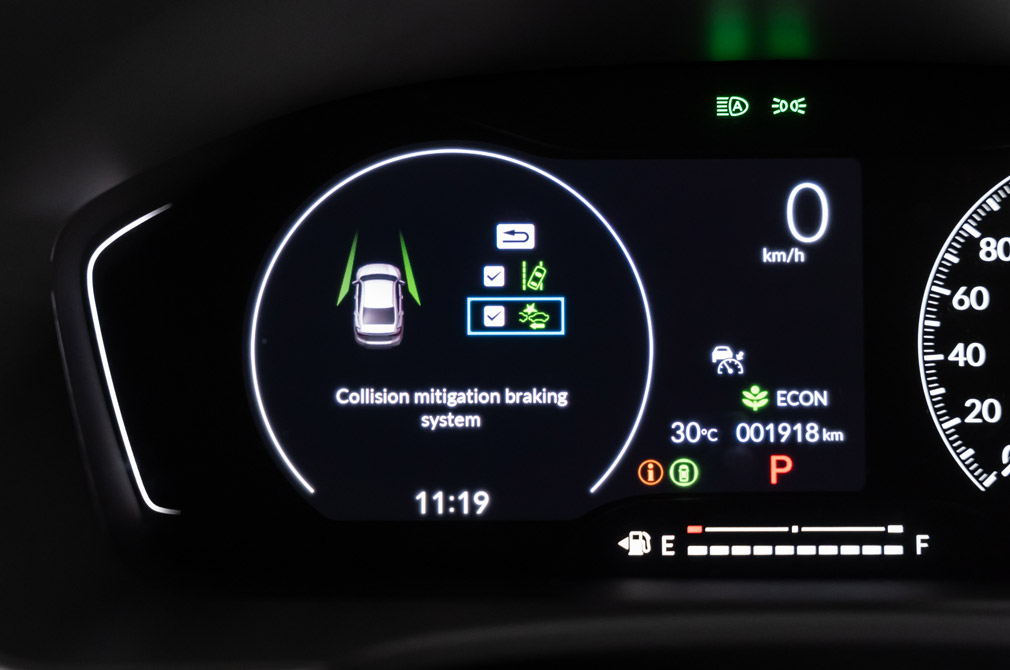 After driving the new Jazz e:HEV, which has a digital instrument cluster, I expected to see the same (though not identical) sort of panel here.

Surprisingly, the cluster here is 60:40 digital-analogue, with the digital part being a 7-inch screen on the left and an analogue speedometer on the right. The digital portion lets you access menus, tweak functions and choose the data you want displayed.

The question here isn’t whether it works fine, because it does. The issue is that one of the Civic’s strongest rivals, the Hyundai Avante, has a digital cluster, and a pretty one at that. To keep pace and outdo competitors, you should at least have the same equipment levels.

That said, the infotainment does work well, and with Apple CarPlay, pairing my phone couldn’t be easier.

The Civic also makes up for these shortcomings by having a longer wheelbase (by 35mm) than before. The increased length improves legroom for backseat passengers, who will appreciate that the centre console seems to protrude less than before. 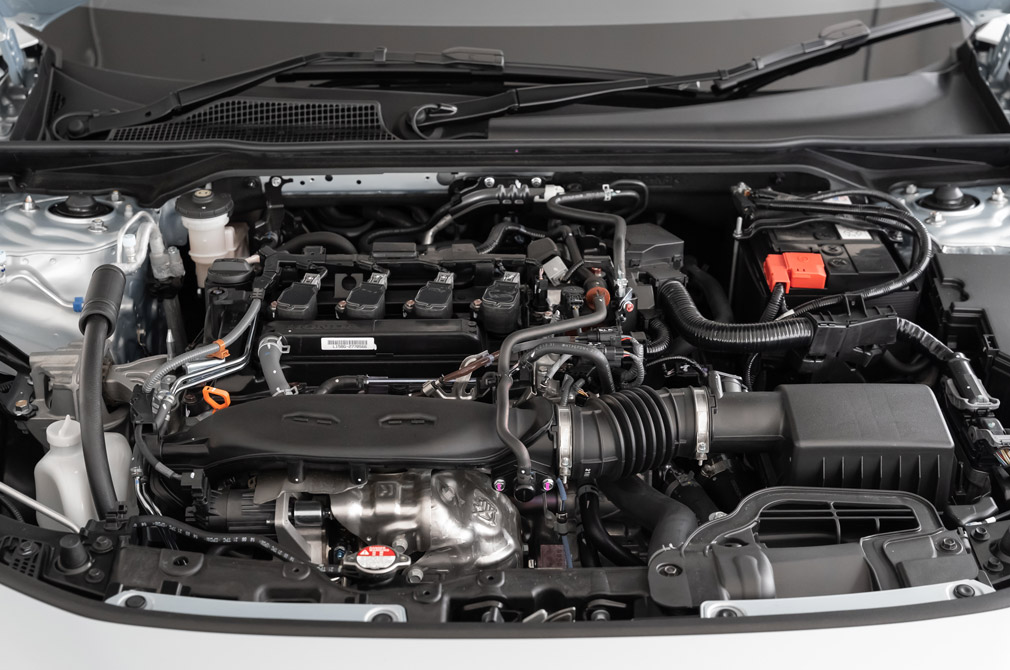 Now, while the interior/cockpit is a hit-and-miss, the new Civic’s performance and handling is a hit.

Many will point out that the previous turbocharged Civic 1.5 has a lot more power and torque. And that in its current state-of-tune, the Civic is “underpowered”.

However, this is unfair, for this Civic has to be compared against the previous 1.6-litre model, for both are Cat A cars.

Pushing out a sportier Civic is cool, but when it ends up in Cat B, the same folks complaining now will be even angrier when that happens. Besides, isn’t that what the Type R model is for?

Anyway, that is another discussion. The latest Civic is powered by a turbocharged 1.5-litre inline-4 that produces 127hp (129PS) and 180Nm, an improvement of 4hp and 28Nm over the naturally aspirated 1.6-litre model. 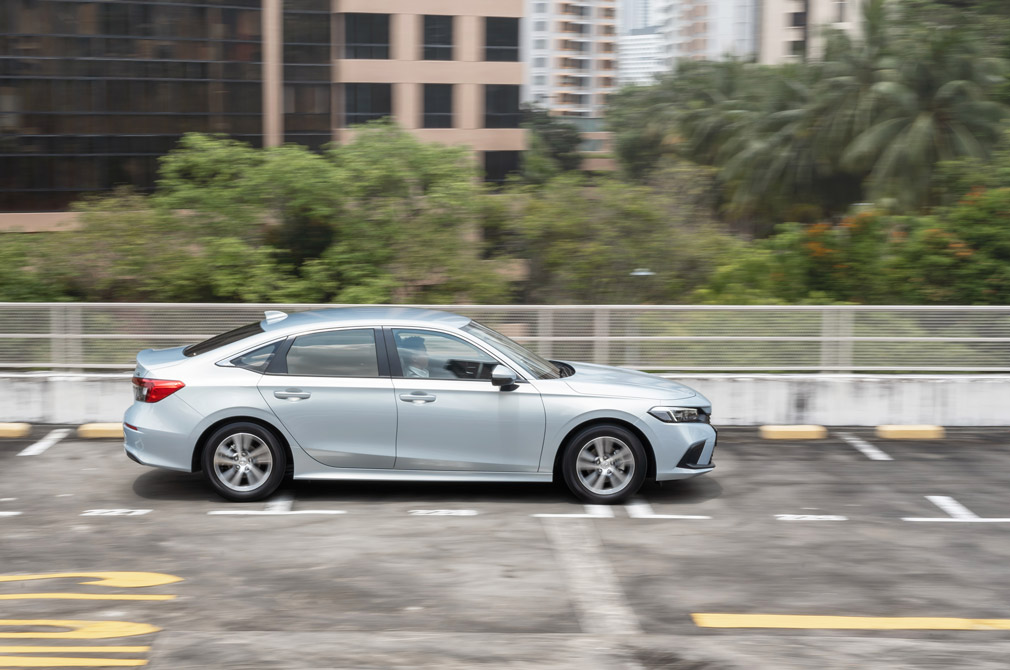 High-performance tyres (and perhaps 17-inch wheels) would make the Civic handle even better.

If the previous Civic did the century sprint in 11.7 seconds, it’s possible that the new one does it a second quicker. Honda refuses to release any figures, though.

Acceleration times may be vague, but the new car’s handling is clearly a nod to keen drivers.

The Civic’s stiffer platform and body pay huge dividends here. Everything feels tight and dialled in; responses are sharper and the nose feels a lot keener than before.

Tuck into a corner and there’s little excess movement or bounce, for the car remains true to the driver’s intentions. There is some lean, but you do not get the strong, understeer-y feeling that usually comes in this model segment.

With better tyres, the Civic can easily give the driver-focussed Mazda 3 a run for its money. 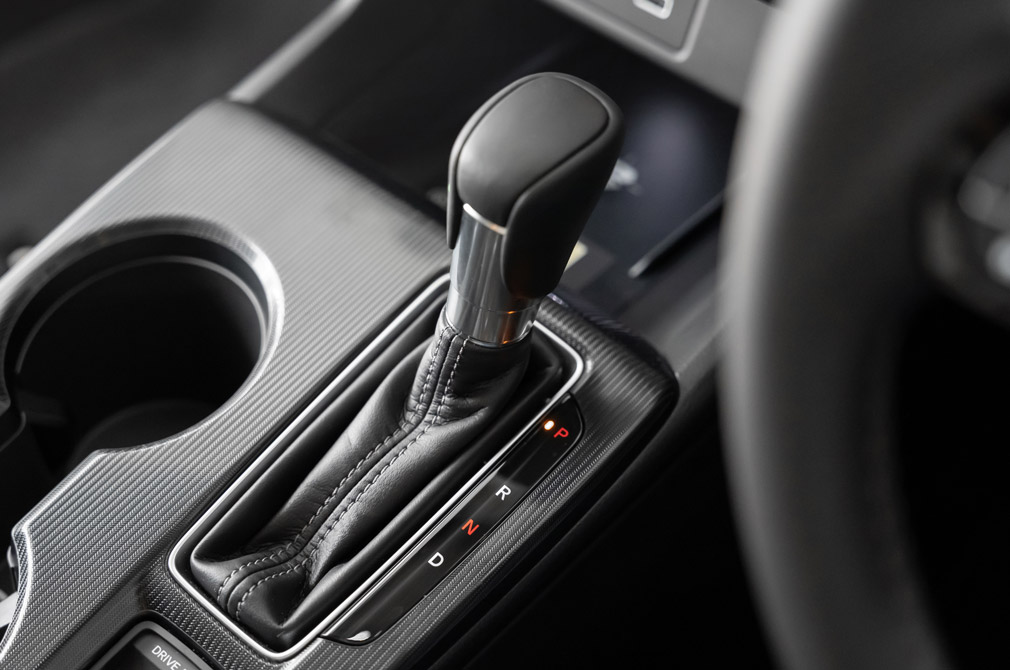 The Civic’s agility has not come at the expense of its composure. In fact, the car rides speed strips and speed bumps – even those annoying small-but-high metal ones – relatively well.

From a handling standpoint, the car is hard to fault. Remember, this is supposed to be a family sedan.

Now what about that CVT, which comes with a “7-speed” override?

But push hard and the stretchiness appears. You could engage the manual override function to help mitigate things. But a CVT will be a CVT. 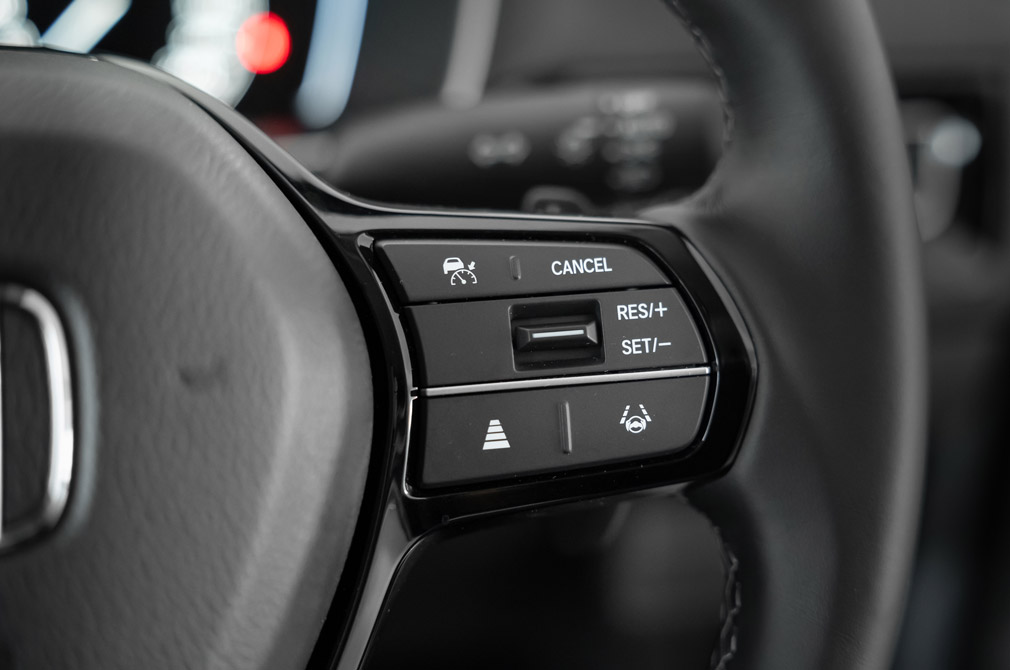 As a driver, I like what the new Civic brings to the table. Its punchier performance, agile and responsive handling, are huge pluses. It’s a step in the right direction, and hopefully, Honda continues down this path.

The CVT is tolerable. Naturally, I think a 6-speed automatic would be a better fit/compromise.

My biggest bugbear is the standard equipment list. Things like a fully digital cluster (various selectable layouts would be a bonus), dual-zone climate control and LED headlights – amenities that consumers expect to be standard – are all absent.

So, the new Civic is not perfect. But the improvements over the previous model cannot be overlooked. It’s still more than a family sedan. And while COE premiums are ridiculous, the car’s appeal just might make acquiring one a palatable decision. 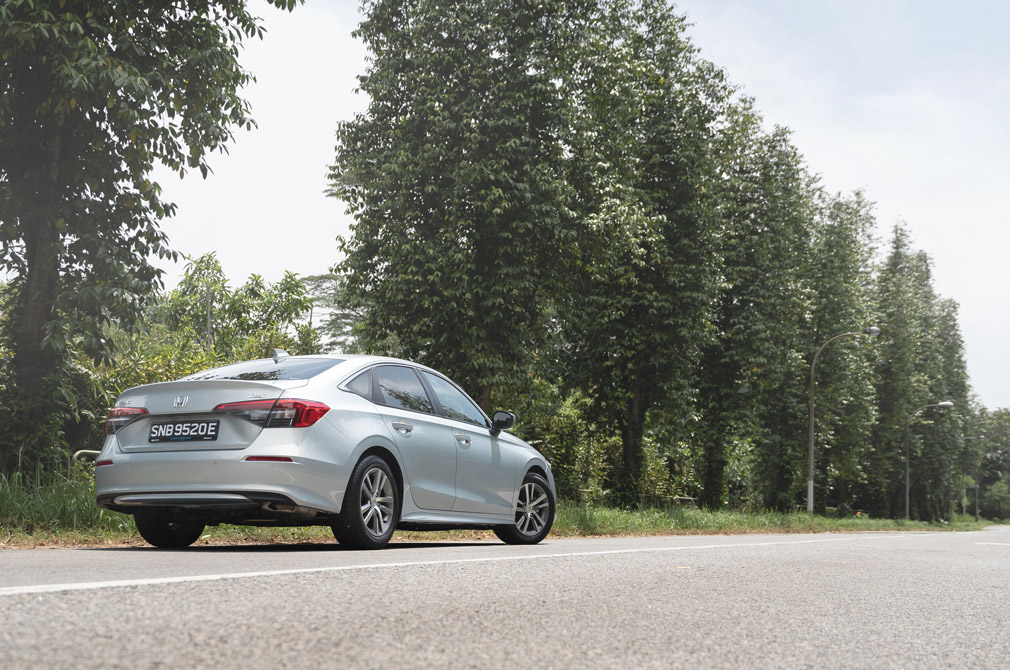 Click here for our Honda City review
Or check out our Honda Jazz e:HEV review here
We review the Hyundai Avante