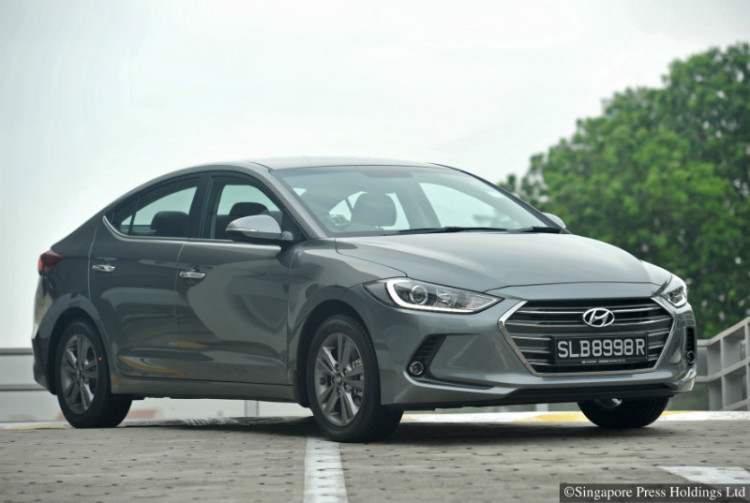 In the good ol’ days, a new car model had to have a new platform, a new engine and, quite possibly, a new transmission.

Those days are gone. These days, a new car has a new design – and new features, mostly onboard gadgets.

So it is with Hyundai’s sixth-generation Elantra, a sedan which strikes a stylish pose and is stacked with bells and whistles to do battle with the Japanese. The new model has the same drivetrain as its predecessor, but tuned down slightly, ostensibly for better emission.

Hyundai claims the Elantra’s chassis now consists of 53 percent high-tensile steel, up from 21 percent previously. This, it says, makes the car lighter and more rigid.

Which explains why its performance has not dropped despite the dip in output. Zero to hundred is still 11.6 seconds and top speed is still 195kmh.

The latest Elantra’s fuel consumption is, however, slightly higher at 14.7km/L from 14.9km/L. In real-life driving, the car averages 11.1km/L, which is less than the Toyota Corolla Altis’ 12.5km/L.

Reference to the Corolla is unavoidable. After all, the Elantra is aimed squarely at the Japanese standard bearer.

The Toyota is slightly longer, but the Hyundai is a tad wider. Both cars have a wheelbase of 2700mm, but you will find the Corolla’s rear legroom noticeably bigger.

The Corolla is also more brisk on the go, thanks to its continuously variable transmission (CVT).

While you may think the Elantra’s six-speed autobox would provide more driving pleasure, the truth is that the Corolla’s CVT is no ordinary CVT. It mimics the ebb and flow of a traditional automatic quite well and you do not detect the unending CVT whine that irritates most drivers.

What the Elantra excels in is ride and handling. Hyundai has done a creditable job of tuning a suspension that is capable of absorbing nasty speed humps as well as keeping the car on an even keel when driven fast around a bend.

The car feels nearly as solid as a German model, with vibration and harshness kept at bay at higher speeds. At the helm, the Elantra’s heftier steering reinforces this Continental feel.

Engine noise, however, is louder than expected. From 3500rpm, the din of the power plant starts to intrude. Unfortunately, you need to visit that rev range often, such as when overtaking or moving off from the lights.

So, on the whole, the car is not as refined as the Corolla. It is not far off, but it misses the mark set by the superb Toyota.

The one other thing that mars the Elantra’s ambience is its overpowering “new car smell”. It is not the scent of leather and veneer. Rather, it is a cocktail of volatile organic compounds which sticks to your hair and clothes.

Still, there is a lot going for the Elantra. It has a sporty and modern look. And it is stacked with premium features.

If nowhere else, the Elantra matches the Corolla on this front. It being about $10,000 cheaper does not hurt, either.