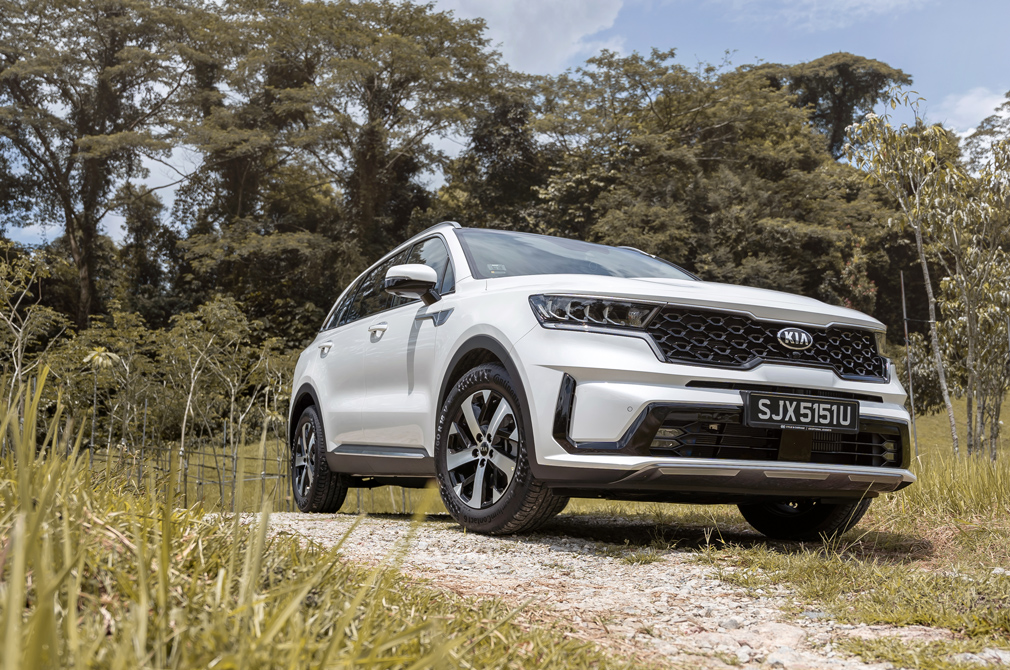 Am I reading too much into the fact that the old Kia Sorento looked from some angles like an Audi Q7, whereas the latest model, with a hint of bustle tail in its squared-off rump, has shades of Rolls-Royce Cullinan about it?

Perhaps not, because the new, fourth-generation Sorento does represent a noticeable upmarket push. It has grown slightly (by about 10mm) in every direction, but more significantly there is a distinct air of poshness absent from its more utilitarian predecessor.

Externally it looks much sharper, literally, than the blobby third-gen model. Its angular lines, the restrained use of chrome highlights and gloss black trim around the nose and tail, the dark-tinted LED headlamps which now integrate with the Kia’s “tiger-nose” grille, and of course that distinctive rear end that at a glance (and perhaps after about 5 beers) looks like it’s attached to something with a Spirit of Ecstacy up front, are all very classy and give the car great presence.

Tellingly, despite its hulking size, this seven-seater SUV still looks proportionate rather than flabby – something which many like-sized rivals fail to manage. 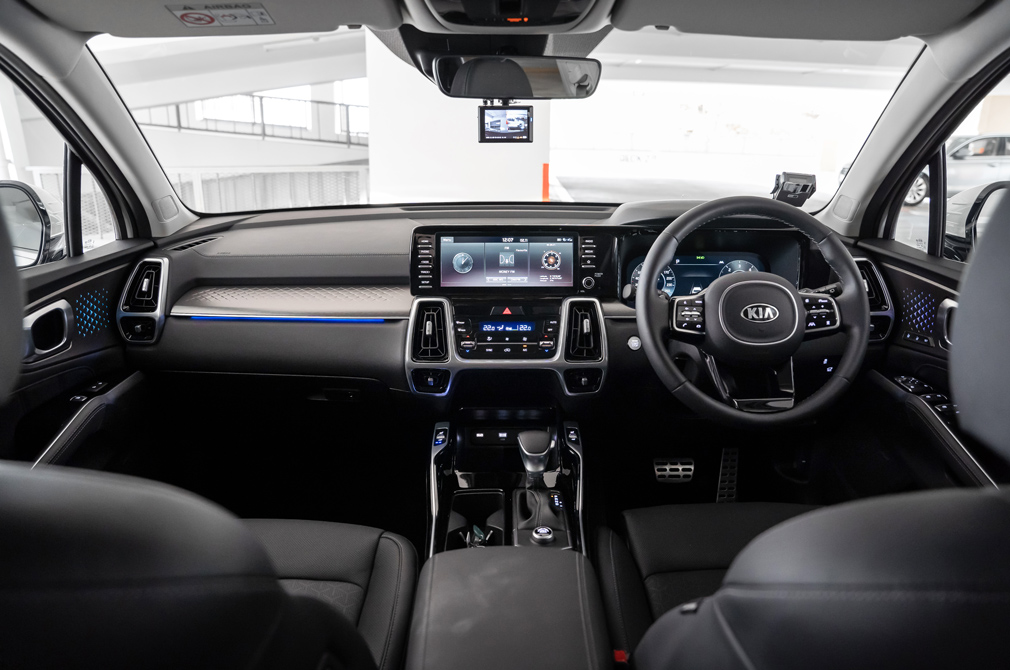 Interior styling is similarly improved, with an angular fascia topped by a big (10.25-inch) infotainment touchscreen. The overly-fussy air vents are a jarring touch, the front seat squabs are a bit short for the long-legged, and the mish-mash of physical and virtual controls for the climate control functions are an ergonomic mess – the virtual buttons don’t emit a click to acknowledge inputs, so the driver invariably (and dangerously) has to peer at the display to see if his command has been registered.

But otherwise the Sorento’s controls are easy to use and the cabin is spacious and ergonomically beyond reproach, and materials are a step above its predecessor’s too. There is ample width for 3 in the second row, and immense legroom – helped by a wheelbase 35mm longer than before. Even after sliding the centre bench forwards far enough to accommodate full-sized adults in the last row, there is still ample space for second-row occupants. Access to the third row is relatively painless too, thanks to the electrically-operated tip-and-slide feature of the middle row.

Locally the Sorento comes in SX, SX Tech Pack and GT Tech Pack trim levels, with the first two being front-wheel-driven and the last, all-wheel-driven. 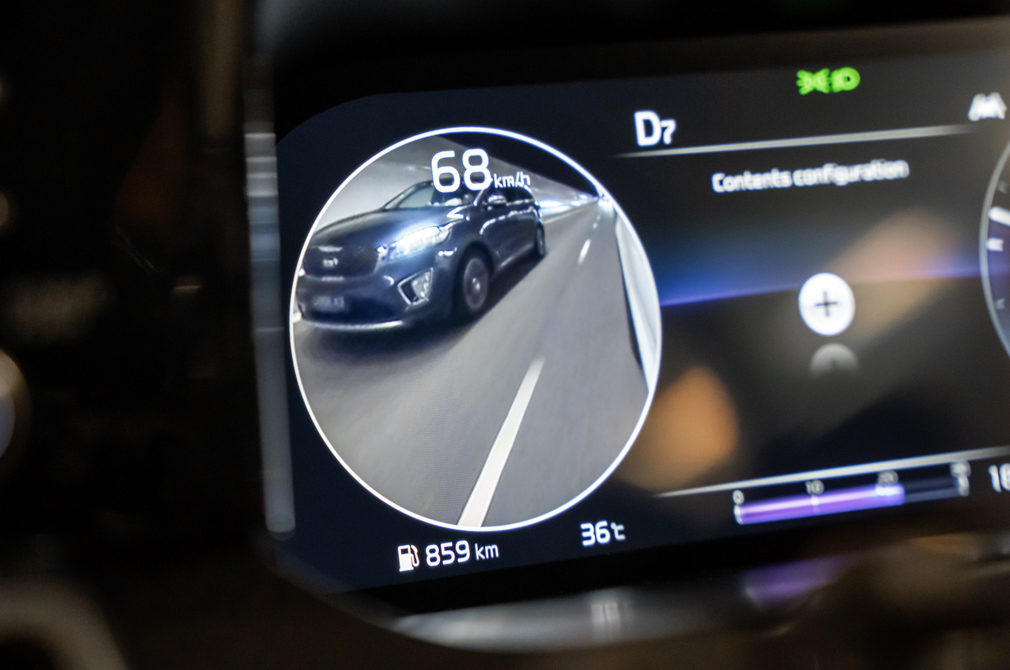 One unusual feature is the blind-spot view monitor – when the driver activates the indicator on one side, a real-time camera feed of the car’s blind-spot area on that side is projected onto the driver’s TFT display (replacing either the speedo display or the rev counter, depending on which indicator is on).

Additionally, the GT Tech Pack comes with 19-inch rims (instead of 18s), side steps, and selectable modes (Snow/Mud/Sand) for its all-wheel-drive drivetrain.

The Sorento is only available here with (unusually these days) a 2.2-litre turbodiesel four-pot, carried over from its predecessor. The gentle-giant delivery of the engine suits the big Sorento to a T, with its 200bhp and more significantly, 440Nm of torque between 1750 to 2750rpm.

It takes the 1.9-tonne SUV to 100km/h in 9 seconds flat (9.2 seconds for the heavier, all-wheel-drive GT), and mid-range acceleration is effortlessly relaxing.

Power is channelled through an 8-speed dual-clutch gearbox instead of the old model’s 8-speed automatic. Whether this is an improvement is debatable though – there is pronounced drivetrain whine, and there seems to be an inordinate amount of clutch slip when moving off from a standstill. On the move though, gearchanges are slick enough and the gearbox is quick to respond to the paddle shifters. 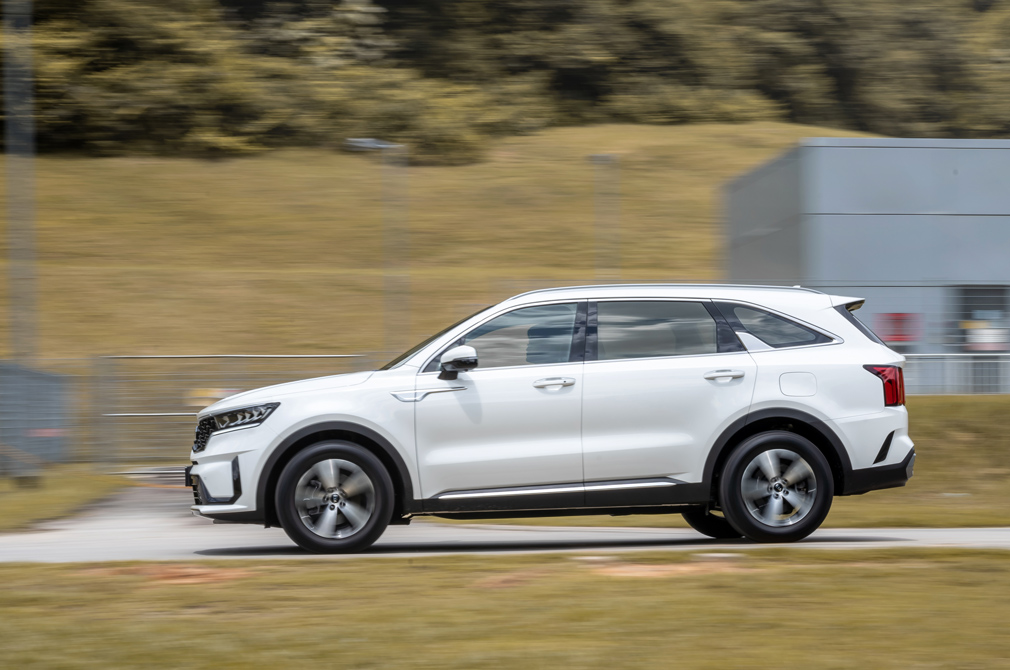 Being a Diesel, the Sorento is notably frugal for its ilk – claimed consumption figures are 17.5km/L (SX) and 16.7km/L (GT) – well below those of petrol-powered rival SUVs.

It may be swift in a straight line, but the Sorento pleases when the road turns as well. Despite its size and height, it doesn’t lean too much through bends, and the damping is taut enough to keep it from floating and heaving over bumps and undulations.

In fact there is a slightly firm (but not unpleasant) edge to the ride, a far cry from that of its softly-sprung predecessor.

Adding to its capabilities as a swift, relaxed mile muncher, the Sorento is also very refined, with little road, engine or wind noise even at speed.

Big, good-looking, quick, frugal, comfortable and well-equipped – you could say the Sorento is Kia’s over-achiever. 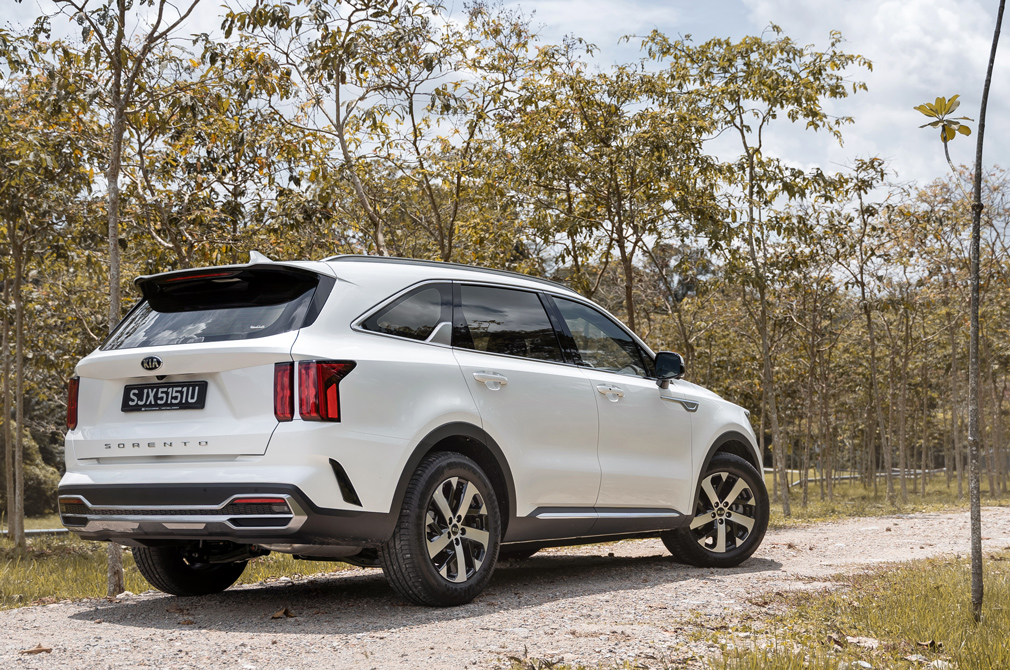