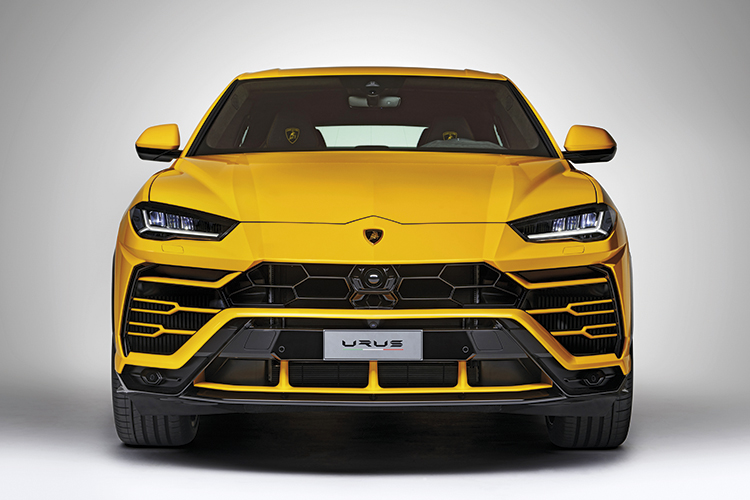 Despite various performance SUVs which have come your way, the idea of a Lamborghini off-roader is still alien.

Coming face to face with Lamborghini’s Urus is almost a surreal experience. Despite various performance SUVs which have come your way, the idea of a Lamborghini off-roader is still alien. So, seeing one up close is almost like seeing a hippo with wings.

Interestingly, the Audi-owned Italian brand had an SUV before – the LM002, built between 1986 and 1992. But it was too niche and too long ago. It was also a time when SUVs were considered to be the purview of farmers, hunters and soldiers.

The Urus, however, comes at a time when the world cannot get enough of SUVs.

At first glance, the car appears milder than its concept version. Gone are the high-mounted trapezoidal tailpipes integrated with the rear bumper, the sharp-edged rear three-quarter windows, the aggressive air vents aft of the front wheel arches. 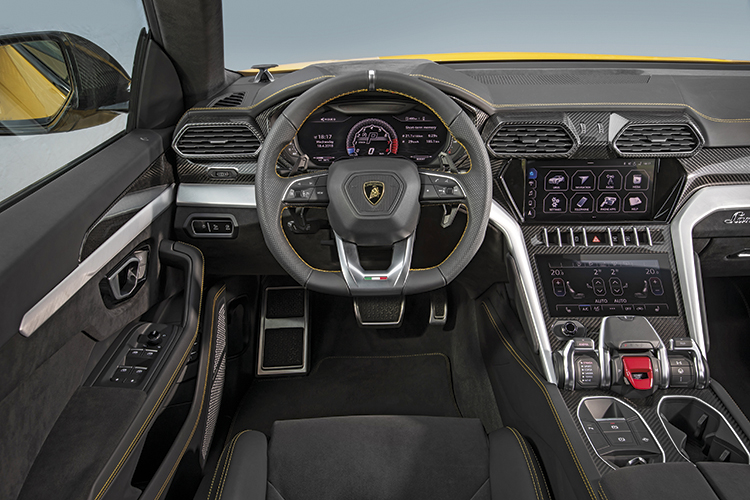 Lamborghini Urus cockpit is neater, better connected and much more accessible than the long slung ones in the Huracan and Aventador.

Despite being watered down, the Urus is still a striking creation, with styling elements which link it to the Lambo family. And most will agree there has never been an ugly Lamborghini. The Urus does not break that tradition.

It also appears surprisingly compact for a vehicle measuring more than 5 metres bumper to bumper. It definitely looks less bulky than the BMW X6, and less bulbous than the Bentley Bentayga.

Credit for this goes to its extraordinary width (more than 2 metres excluding mirrors), long wheelbase (a mite over 3 metres) and relatively low-slung profile (it is actually lower than something like the Toyota RAV4).

The car’s basic architecture is derived from models like the latest Porsche Cayenne and Audi Q7, both very capable SUVs. But with Lamborghini being a supercar brand, expectations are even higher. In fact, much higher. 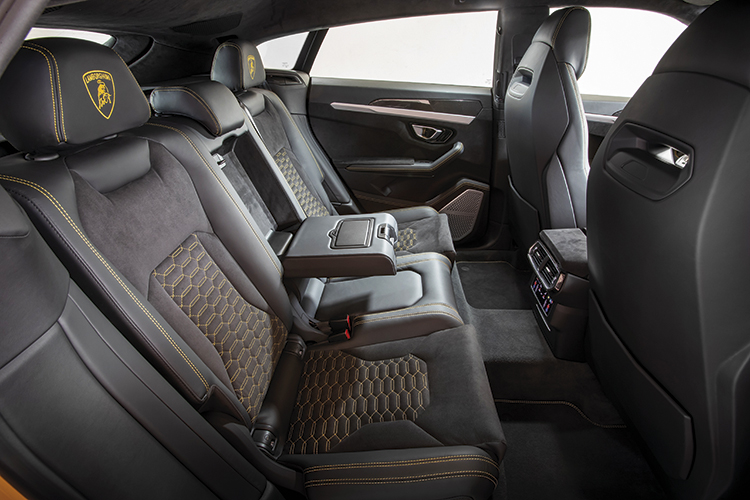 Less roomy than expected, but Urus interior is versatile enough for the (wealthy) family and preserves the visual character of a modern Lambo.

That the Urus is a car built to win new customers to the Lambo fold is a given. But will it alienate hardcore Lambo fans?

At the launch event in Rome in April, the company announced that 68% of customers who booked an Urus were new to the brand. And the average age of these newcomers was up to 10 years above the average 40-45 of a typical Lambo buyer.

The purists’ deepest fear, then. A car for drivers too old to get in and out of a low-slung Huracan or Aventador surely cannot be very sporty.
Well, a few laps at the Vallelunga racetrack 20km from Rome proves this fear to be largely unfounded. 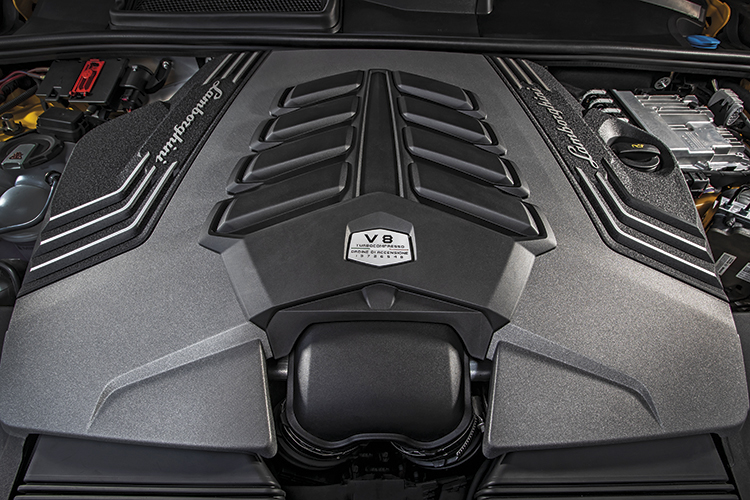 Lamborghini Urus’ turbocharged 4-litre V8 kicks out 650hp and 850Nm of torque, and sends this supercar-SUV rocketing from rest to 100km/h in just 3.6 seconds.

Yes, the car does not have the tarmac-kissing centre of gravity as its siblings, but thanks to technological wizardry, the Urus acquits itself extremely well.

A 4-litre turbocharged V8 – a first for Lamborghini – endows the 2.2-tonne SUV with supercar-like credentials, allowing it to despatch the century sprint in 3.6 seconds and to reach a top speed of 305km/h. Peak torque of 850Nm arrives at 2250rpm, with immense shove accessible in a seamless fashion thereafter.

Transmitting the steroidal output is an 8-speed automatic, again a first for the marque. 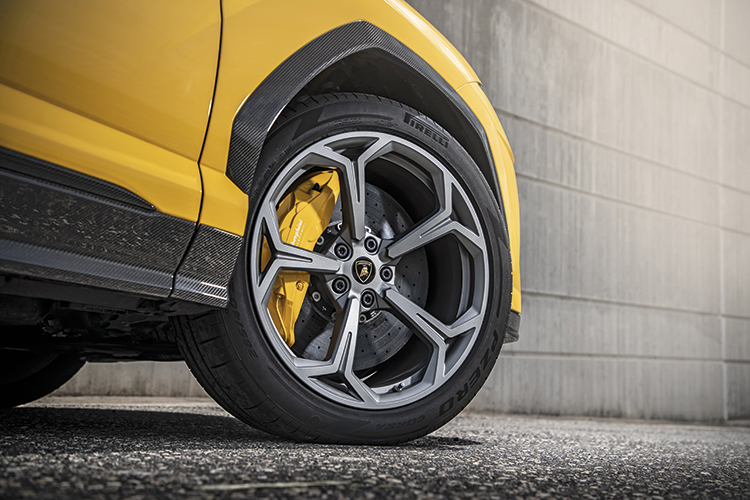 While all-wheel-drive has been a Lambo trademark, the Urus 4×4 system has more tricks up its sleeves. It has an integrated front differential, a central differential, and a rear differential with active torque vectoring. The system channels as much as 87% of torque to the rear axle and 70% to the front to help it cope with challenging ground conditions.

A short sprint around a gravel track proves less unwieldy than you would expect of a vehicle akin to a Mercedes-Benz S-Class on stilts. But it is on the racetrack that the Urus proves to be most impressive. You hardly feel its plus-size as you blast it through the legendary Autodromo Vallelunga, a 4km wrench-shaped circuit with a beautiful mix of straights, sweepers and hairpins.

The car traces the racing line drawn by a pace car (also an Urus) with amazingly little effort.

Lamborghini Urus’ turbocharged 4-litre V8 kicks out 650hp and 850Nm of torque, and sends this supercar-SUV rocketing from rest to 100km/h in just 3.6 seconds.

Its massive standard-issue ceramic brakes have no problem shedding speed for even the third, sixth and seventh turns. These corners are insane because they are not only sharp, but they follow long straights which allow the car to attain high speeds.

But between pure friction provided by its massive Pirelli P Zero Corsa tyres and a battery of electronic dynamic aids, the Urus finds its way each time with practically no fuss.

Even when the well-proportioned car is carrying a tad too much speed into a turn, the combination of rubber and semiconductor-genius saves the day – but not without a whole lot of howling from the Pirellis. 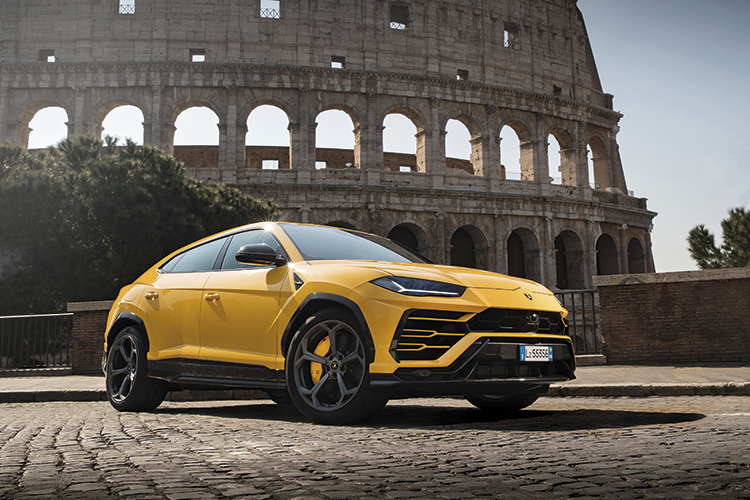 The Urus’ rear-wheel-steer system helps “shrink” its massive length and wheelbase. Its variable steering is precise, but a little too light, and it still requires more turns than in a typical supercar.

The suspension system has adaptive damping to help cope with changing surface and driving conditions. Its active torque vectoring distributes up to 75% of torque to each wheel on the fly.

It also has active anti-roll bars, which were last seen on the Audi SQ7. Equipped with a small motor and a set of gears, the bars apportion stiffness on each axle to help the vehicle be as flat as possible through a turn. This wizardry will also be found in the upcoming BMW 8 Series Coupe. 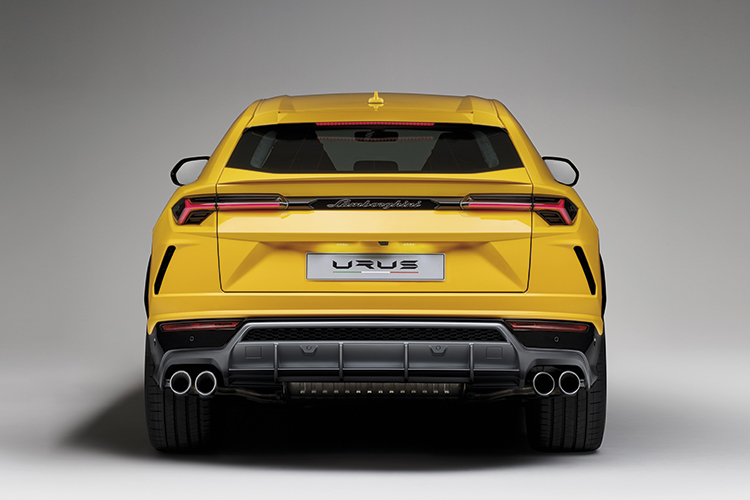 As the world’s first supercar-SUV, the Lamborghini Urus fits the bill in the way it drives, the way it looks and the way it sounds.

It is difficult to take note of contribution from each of these driving aids when you are in full flight, but it is even more difficult to imagine taking the Urus through its paces without them.

For all its brilliant hard engineering, there is no way such a big, heavy and tallish vehicle with such a long wheelbase can feel so capable, so confident and so easy to drive on a racetrack.

The car is also impressively quick, with its 8-speed transmission banging in each cog with the speed and vigour of a robotised manual gearbox. 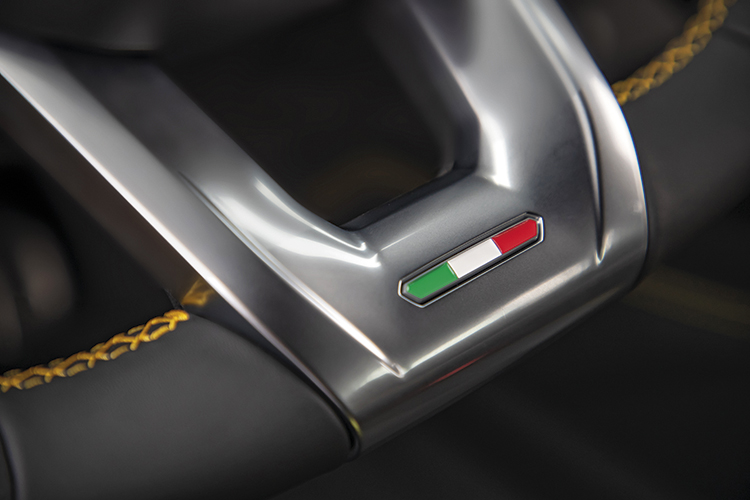 In this respect, the purists have nothing to fear. The Urus matches up far better than expected. On any racetrack, it will offer more entertainment than any non-pro driver can hope for in a car – SUV or not.

How does it fare on public roads? Well, the roads around Rome are not exactly the best driving tarmac in the world. Hence the road test segment is short (only around 50km). But it is long enough to show the car’s air suspension is unable to filter out the ruts on some stretches.

The car is most comfortable in Strada (street) mode. In Strada, the Urus is far less punishing than any traditional sports car. Sport mode is self-explanatory, while Corsa is a race mode designed to offer the fastest lap. 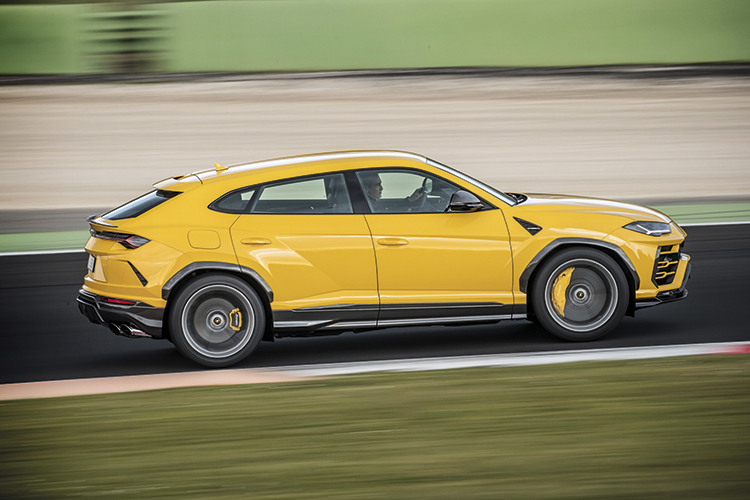 There is no way such as big, heavy and tallish vehicle can feel so capable on a racetrack.

The Urus comes with three other driving modes – Sabbia (sand), Terra (gravel) and Neve (snow), none of which is relevant in Singapore.

You can also select your own level of sportiness for the steering, chassis and damping via aeronautical switches flanking a start-stop button styled like a missile launching device – as seen in the Huracan and Aventador.

But unlike the other two models, the cockpit is cleaner and neater, with far fewer physical buttons and knobs. A large touchscreen allows the driver to access various infotainment functions, making the Urus the most modern and connected Lambo in town. 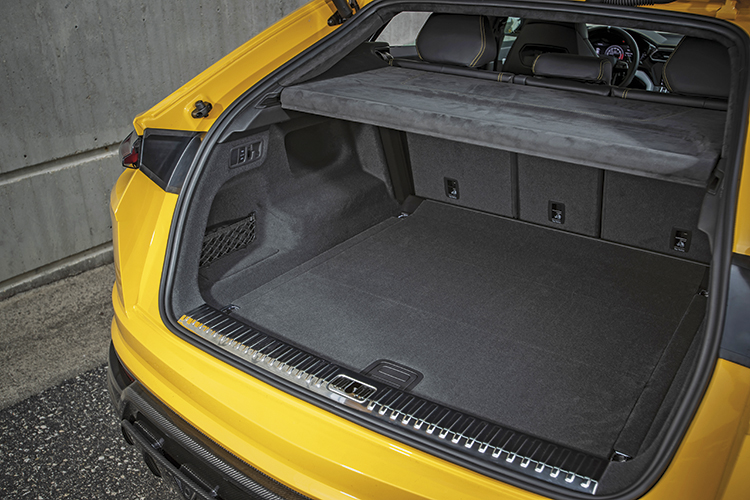 It is also the first and only SUV without a shift lever. Like in a Huracan, you pull the upshift paddle to engage Drive. The shift paddles are not as large as you would find in a supercar, perhaps a nod to the Urus’ ability to dish out plenty of thrills even if you drive it like an automatic. Truly, this is a vehicle which marries the excitement of a sports car and the versatility of a family carrier.

Having said that, the Urus is not as roomy as you would expect of a 5m-long SUV with a 3m wheelbase. With a roof sloping towards the tailgate, passengers who are of above-average height will find the rear headroom adequate for short to medium distances, but less comfy on long hauls.

The luggage area is reasonably big, but will accommodate only two full-size golf bags when all seats are occupied. 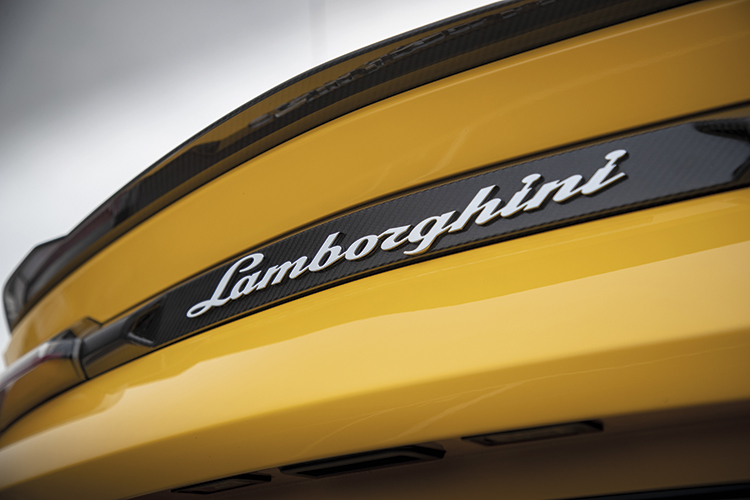 Because it is a front-engine Lamborghini, and its exhaust is a distance away from the front row, the enthusiast at the wheel might quibble about how quiet the Urus is.

It is, however, not so quiet. Stand outside the car and it is clear that it makes all the right noises at a respectable decibel level. But to folks who are used to having the engine and exhaust system sited just behind their seats, the Urus’ cabin acoustics is subdued.

There is no way such as big, heavy and tallish vehicle can feel so capable on a racetrack.

The cabin is lined with plenty of suede-like Alcantara and leather. For the cockpit, there is a choice of aluminium, carbon fibre and wood trim. A high-set centre console practically isolates the driver from the front passenger. Like the sloping roofline, not particularly great for space packaging, but works well to preserve the visual characteristics of a Lamborghini.

Did someone say something about “compromise”? Well, yes, there is some of that. But the Urus still succeeds in preserving the aura of a Lamborghini rather well. 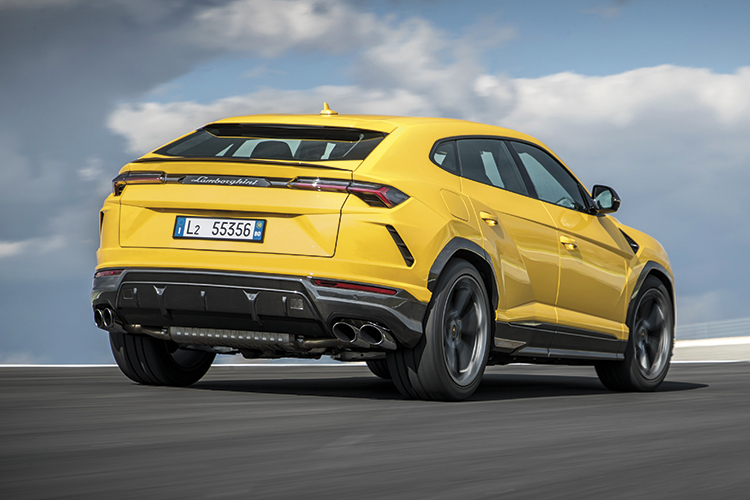 Lamborghini Urus doesn’t kiss the tarmac like other Lambos do, but acquits itself extremely well on a racing circuit.

As the world’s first supercar-SUV, it fits the bill in the way it drives, the way it looks, and even the way it sounds (as it zooms by). And going by the relatively attractive pricing, you will probably see (and hear) quite a few zooming by soon.