Lexus CT200h is a five-door hatchback with a hybrid powertrain
Loading posts...
0 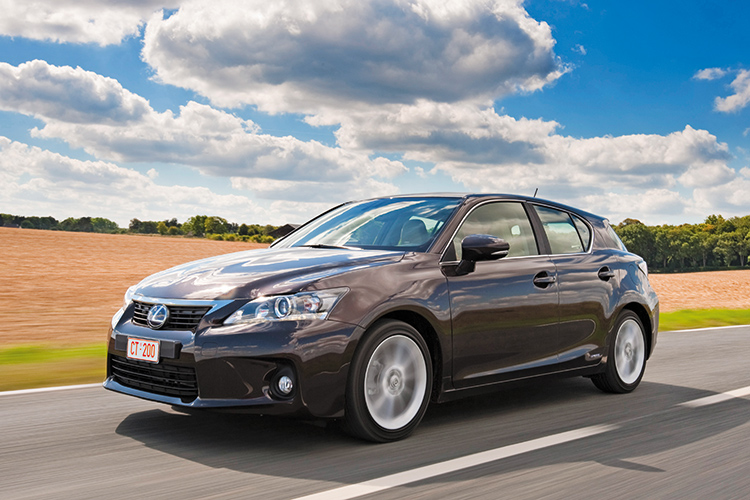 In the PowerPoint presentation at the media launch of the Lexus CT200h on the outskirts of Paris, flattering comparisons were made with the usual “Competitors A, B, C”.

That same evening, after I had a few rounds of whisky (for journalistic reasons) with the affable chief engineer Osamu Sadakata, he let slip that A stands for Audi A3, B for BMW 1 Series and C for C30 Volvo.

The model he rates most highly out of the trio is the A3 (“Very good car, excellent car,” he said), which was tested in 2-litre 200bhp form by Lexus engineers eager to benchmark their new baby against its primary rivals. The BMW, incidentally, was the 120i, while the Volvo was the 2.4-litre. 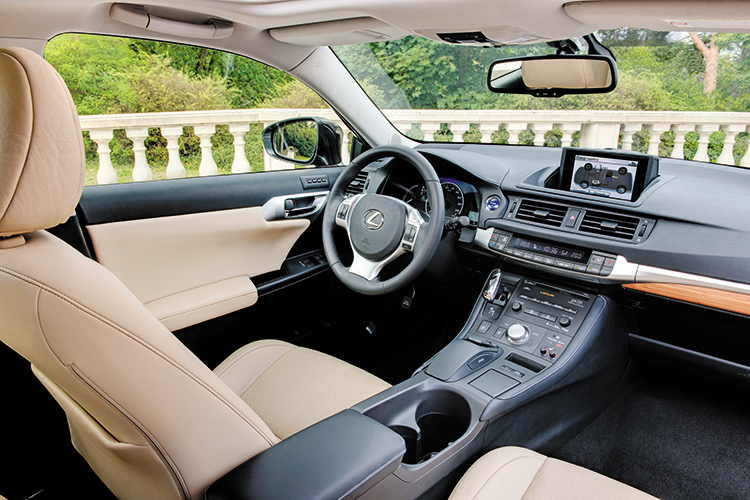 Lexus CT200h has a high-quality, user-friendly cockpit that offers a diverse choice of colours, finishes and gadgets.

With hybrids at the heart of its burgeoning European business, Lexus naturally chose petrol-electric propulsion for its important newcomer.

A modified version of the 1.8-litre Prius hybrid system drives the Lexus CT200h, whose power delivery and operational modes have been made more dynamic.

Transplanting an existing drivetrain has its limitations, though, which is why the Lexus CT200h is merely 0.1 second quicker than the Prius in the century sprint. 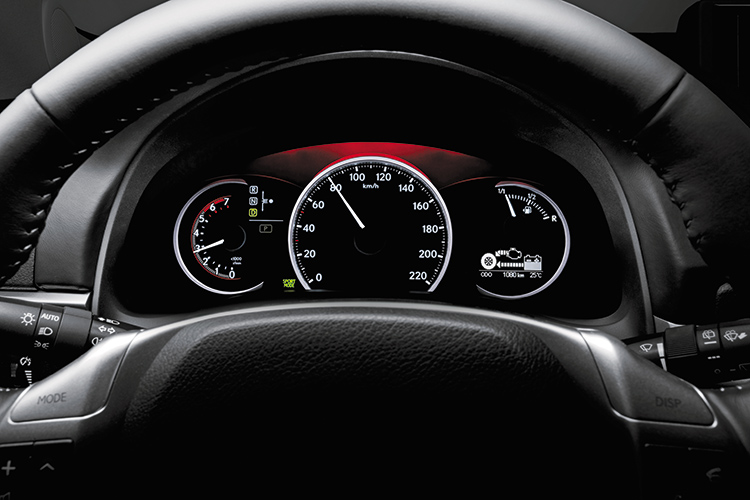 Lexus CT200h’s dual-”mood” instrument panel is delightful for
a while, but the novelty wears off eventually.

Both cars, by the way, weigh exactly the same and boast the same class-leading CO2 emission of just 89 grams per kilometre.

Of course, the Prius is no Lexus and the Lexus CT200h is much more than an eco-friendly family car in fancy clothes.

The sheet metal in question is not particularly snazzy anyway, with the sole modish aspect being the 89 external LEDs that decorate a shape that is more inoffensive than attractive at first sight. 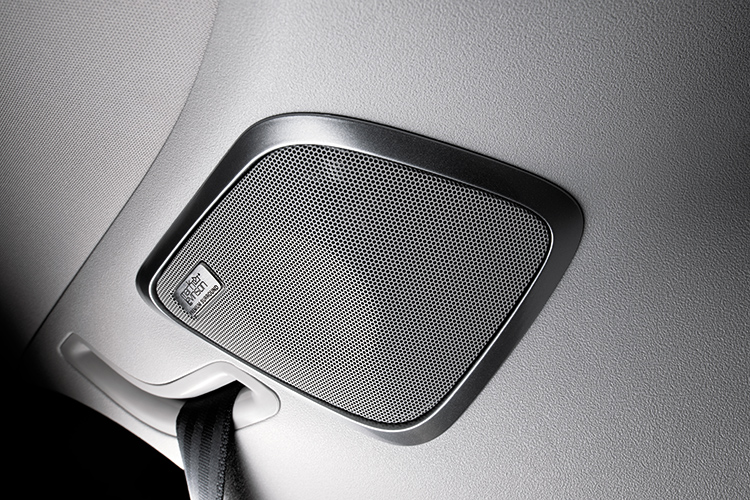 But the styling grows on me, especially when viewed from behind in traffic, and the body cuts through the air easily, thanks to its low drag coefficient of 0.28.

The hybrid-specific blue badging is no surprise, but the optional Solar Yellow paintwork (unique to the CT along with chocolatey Sienna Brown) is a bolt from the blue.

Standard 15-inch rims are another surprise, but owners are likely to specify the 16-inch option. The test cars at the launch event were all shod with 17-inch wheels.

Rolling out of the hotel driveway for the test drive proper, the Lexus CT200h immediately impresses with its positive driving position and convenient controls. 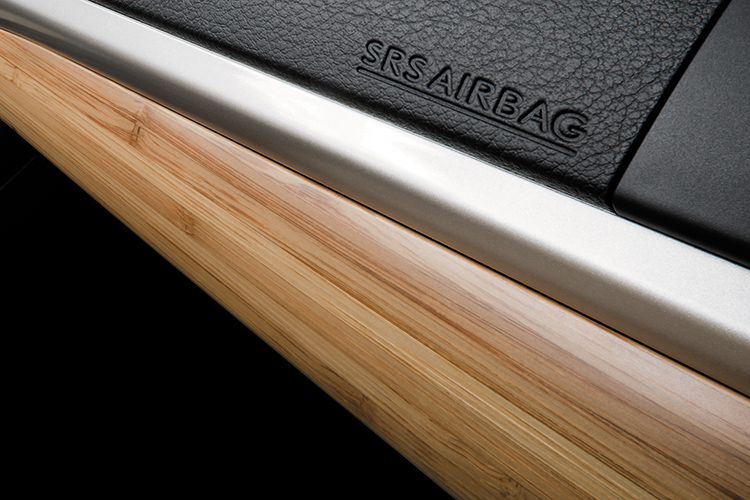 The Lexus CT200h can be had with bamboo trimmings.

Prius drivers will find the action of the “gear” lever familiar (but not its highly reflective finish), while Lexus owners will feel at home operating the air-con and audio devices.

The automaker’s signature Mark Levinson surround sound hi-fi is available as an indulgent option, but standard across the board are unusual loudspeakers with bamboo charcoal-based resin diaphragms.

A new Lexus innovation co-developed with Panasonic, these special speakers are 10 to 15 percent lighter than normal, yet 20 percent stiffer in structure and 10 percent “faster” in sound output.

Also speeded up is the “surfing” using Remote Touch, Lexus’ answer to iDrive. 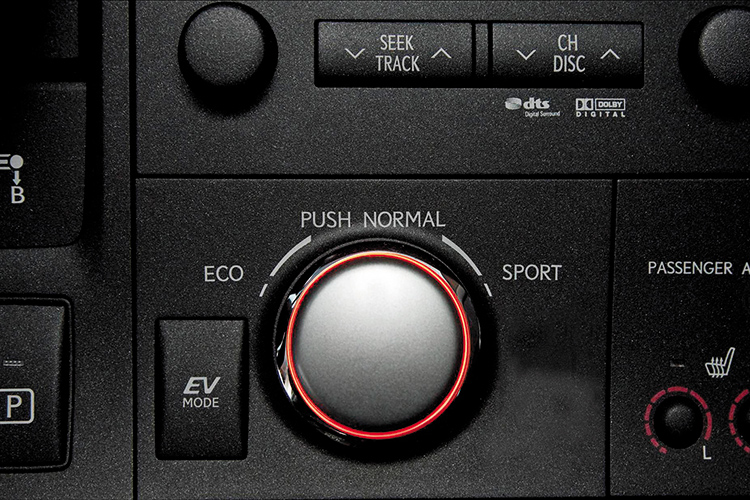 Apparently, no changes have been made to the interface and haptic feedback following the gadget’s debut in the RX two years ago, but it seems easier now to use the mouse-cum-joystick to scroll through the various sub-systems and click the relevant screen icons.

The coolest knob in the Lexus CT200h is not Remote Touch, but the Drive Mode selector. Its three different settings are Eco, Normal and Sport, with a separate “EV” button alongside ordering the CT to run as an electric car, but only if the engine is warm, the battery charge is good and the speed is less than 45km/h.

I manage to glide on electricity for nearly three kilometres through a rural French town, below 30km/h and with a feather-light right foot. 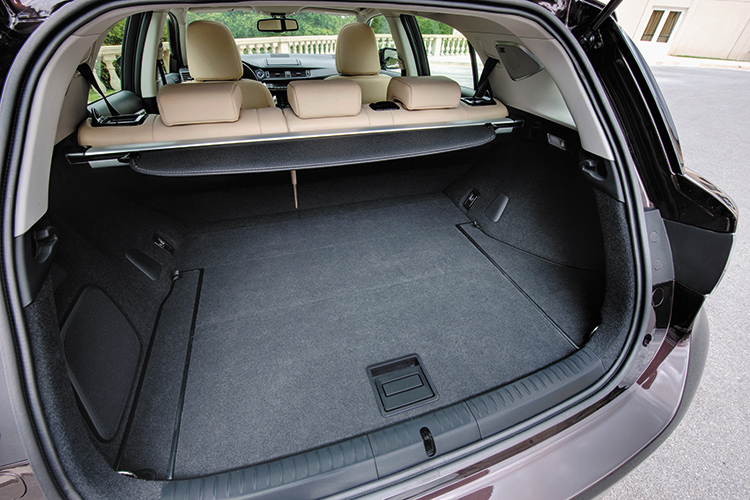 Lexus CT200h’s 375-litre capacity is useful enough, while the bio-plastic material is cool enough for the green brigade.

The in-dash display shows that the battery level drops a lot when the car is being driven upslope, but the stored energy is consumed slowly when moving on level ground.

In Eco mode, throttle response becomes laid-back (but not spastic like in the Prius) and the air-con compressor is wound back, so to speak.

In Normal mode, the hybrid thingamajig works, um, normally and makes the Lexus CT200h feel like a less detached, less digitised Prius on the go. 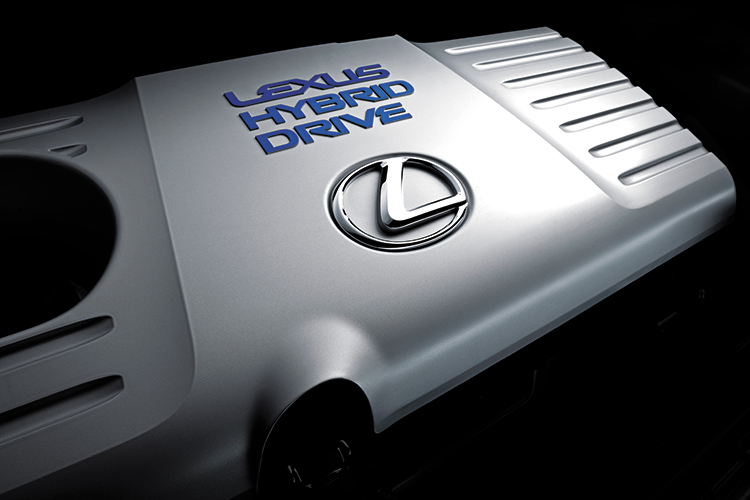 Lexus CT200h powertrain is a proven system with a bit more zip than the donor.

The most intriguing of the Drive Modes is Sport. This not only boosts the motor-generator’s juice from an efficient 500 volts to an “electric” 650 volts, it also loosens the electronic reins on the traction and stability control guardians.

At the same time, the spotlight above the instrument cluster turns from beautiful blue to purposeful red and the hybrid power-eco-charge indicator beside the speedometer is instantly “replaced” by a traditional tachometer (it’s actually just creative illumination, but it looks brilliant).

Activating Sport mode also makes the power steering a little heavier, but this provides extra weight instead of extra feedback. 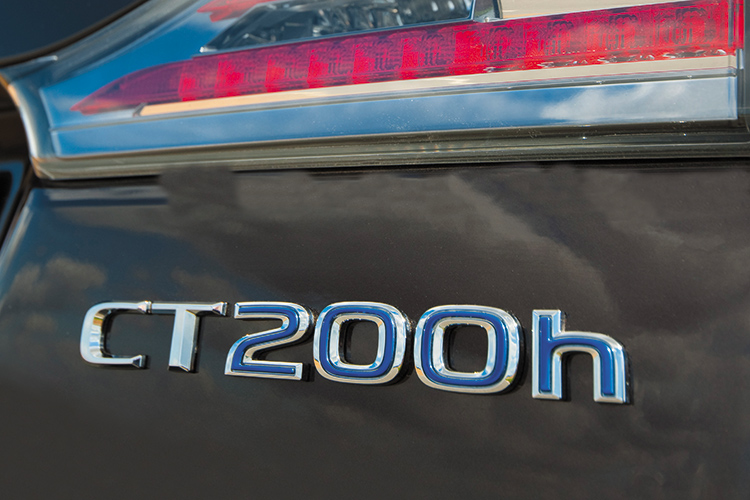 Still, the rack is quick – in fact, with 2.7 turns lock to lock, it is the fastest among all Lexus models today. The Lexus CT200h might be the most nimble among them too, although its handy hatchback size contributes as much to this nimbleness as its chassis and suspension.

Bespoke rear double wishbones and a high level of body rigidity are par for the course, but the Lexus CT200h’s Yamaha-supplied lateral performance dampers are unexpected. One connects the left and right front suspension towers, while the other links the left and right sides of the rear structural frame.

Employed in certain Japanese rockets like the WRX STI, these shock absorber-style struts are meant to counteract smoothly the side-to-side motion generated during cornering, but in the case of the Lexus CT200h, they are used to cancel out high-frequency vibration and thus improve the basic ride comfort. A more linear steering feel is said to be the icing on the cake. 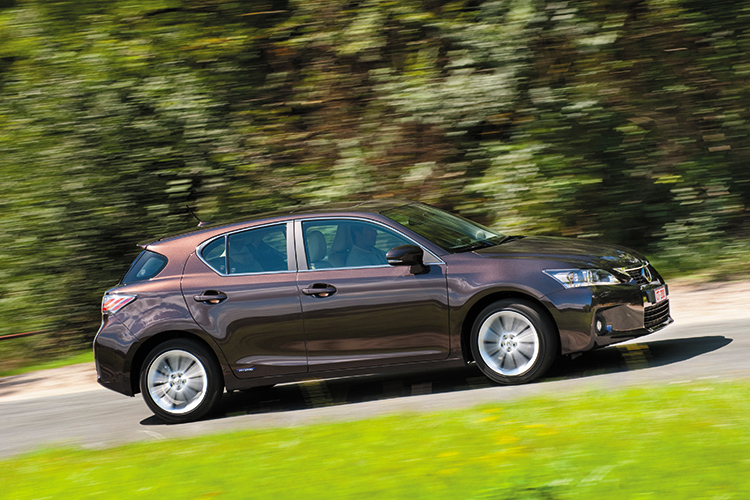 Indeed, the wheel feels more connected to the tarmac than, say, a GS450h, and the turn-in is nippy enough to be interesting.

Threading my way through big bends and tight twists is utterly stress-free, but it is also devoid of driving emotion. In terms of handling, the CT is a workstation, not a Playstation.

Performed in a businesslike manner too is hard acceleration, which sees the electric motor working energetically in tandem with the gasoline engine. 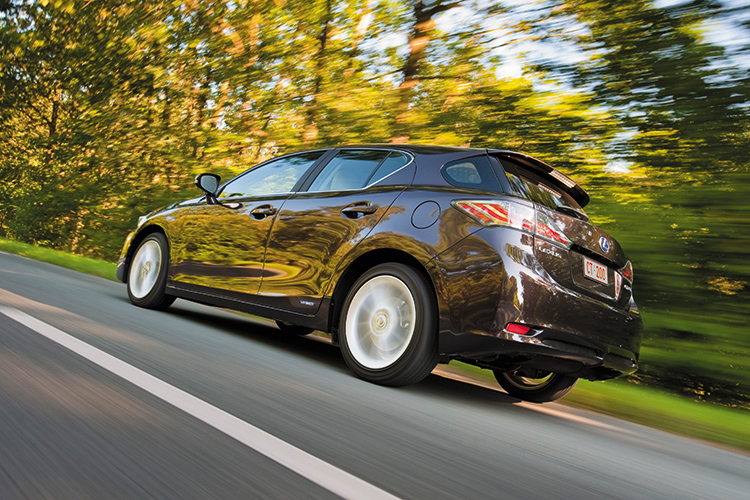 As its lively burst of revs hold steady, the Lexus CT200h picks up speed with some conviction, with the scamper from 60 to 120km/h, for instance, performed in quite a hurry.

The Lexus CT200h is well-built, too, with a standard of fit and finish somewhere between the Golf and the A3, although the glovebox lid is a bit lightweight.

Classy leather pampers the occupants and no less than eight airbags protect them. 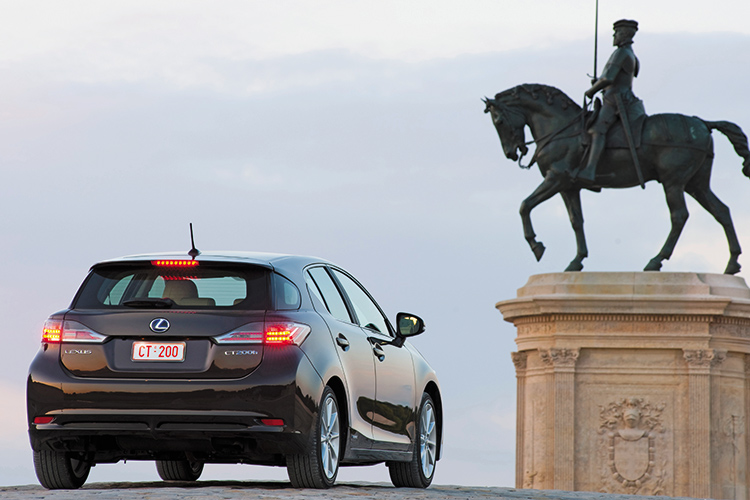 An advanced array of active safety features, which include pre-crash “preparation” of brakes and seat belts, provide further protection.

There is no doubt that the Lexus CT200h will greatly increase Lexus sales in Europe and broaden the brand’s international appeal to young motorists in Toyotas working towards their first Lexus.

But the design and technology of the Lexus CT200h are exacting rather than exciting, and the car’s green connection to the Prius and Auris hybrids is too close for comfort.

Seven-seater Toyota Prius+ is green motoring for the family