Mercedes-Benz CLS, now in its second-generation, is worth the wait
Loading posts...
0 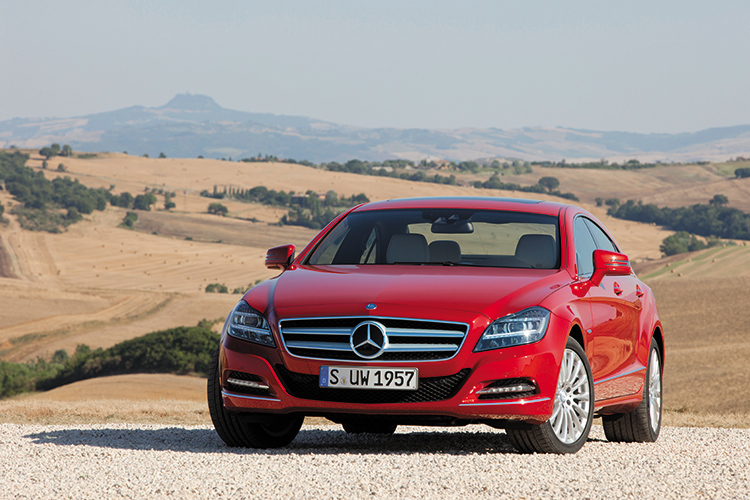 The automotive industry experienced a paradigm shift of sorts at the turn of the millennium. The basic three-box saloon no longer captivated restless buyers, so more niche products were introduced in the hope that one would become the next “must-have” item.

All manner of cross-fertilisation took place right after the era of SUVs and MPVs  – between station-wagons and SUVs, between saloons and MPVs. Mercedes-Benz, for one, found success with its ML SUV, but fell short with its R-Class MPV entry. The marque then planned a model straddling two of its most successful lines – the E-Class and S-Class – to gain a second victory. 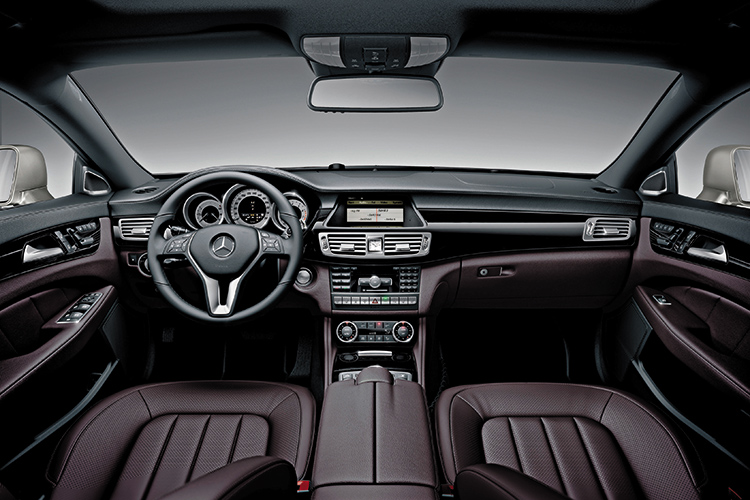 Mercedes-Benz CLS cockpit is a little less distinctive than before, but dashboard offers top-notch quality and amenities.

The Vision CLS concept was revealed in 2003, with the actual production Mercedes-Benz CLS unveiled to the public some two years later with nary a change. Many a Mercedes loyalist passed on the Mercedes-Benz CLS, but it was not the marque’s intention for the vehicle to cater to E-Class upgraders. The new vehicle was meant to win over drivers of BMW and other premium brands.

Mercedes-Benz had sold 170,000 units by the end of CLS production in 2009. Many Mercedes-Benz CLS owners were much younger than Mercedes had dared hope, averaging 45 years of age rather than the usual 50-55. The Mercedes-Benz CLS made the numbers, but more importantly, gave the German automaker a younger appeal. A new icon, if not a new class, was born. 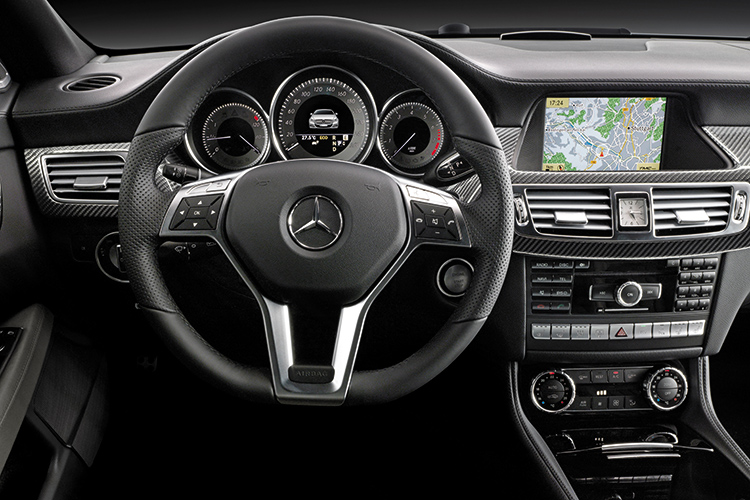 Fast forward to 2010, with this latest incarnation adhering to pretty much the same principle of coupe-like styling, but with a more generous interior and vastly improved operating efficiency. Mercedes designers have stamped a new corporate expression on the already attractive Mercedes-Benz CLS.

Rather than sleek, it appears rather muscular and aggressive. The eye is drawn to a crease line that runs downwards as it flows backwards to the rear wheel arch. Oddly enough, this effect diminishes under even lighting and the original coupe form takes prominence. The new Alubeam paint finish shows off the lines most effectively, more so than red or black. 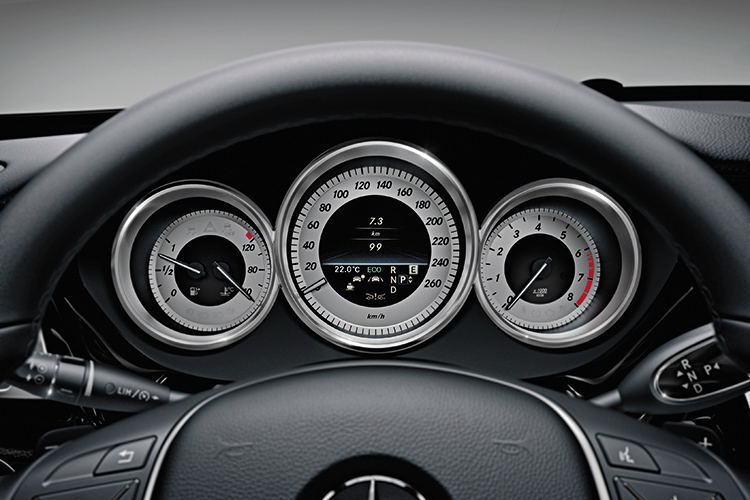 Mercedes’ signature big clock dial has been replaced by a stylish little timepiece above the audio panel.

Mercedes engineers retained the steel monocoque construction, with strategically placed high-strength steel alloys comprising an amazing 72 percent of the vehicle’s panels. This not only gives the cabin a composed feel, it also creates an extremely stable chassis, and hence remarkable body control and handling, without penalising ride comfort. Torsional strength has increased by 6 percent and static flexural stiffness has improved by 28 percent.

All four doors are made of aluminium in a further effort to reduce weight, shaving 24kg from the body-in-white. Aluminium also finds its way into the boot lid, bonnet, front wings, engine and suspension. 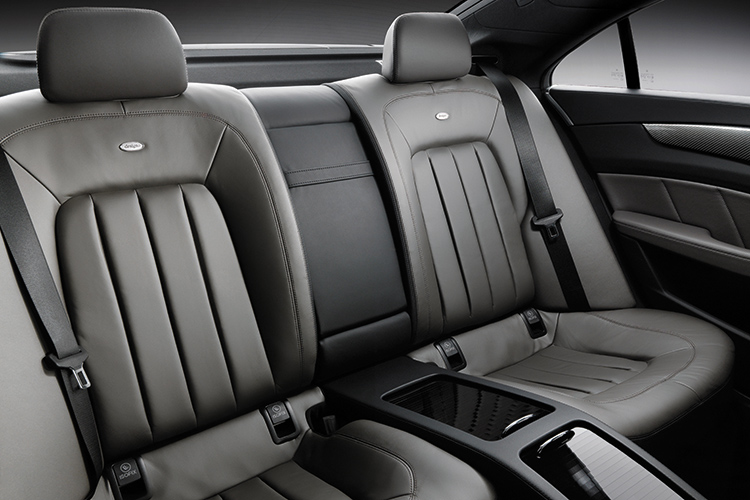 Back seat is still sculpted for two, who will be more comfy
than in the previous CLS.

In the year 2010, however, a cosmetic makeover is no longer enough, so Mercedes engineers aimed to improve outright fuel consumption by an impressive 25 per cent. Enter BlueEfficiency, the marque’s new package of fuel-saving technologies, which include direct fuel injection.

The first engines are two 3.5-litre V6 options for the CLS350, with 306bhp in petrol form and 265bhp as a turbo-diesel. For the first time, the gasoline unit offers a CO2 rating as low as its diesel counterpart at 159g per kilometre. Future offerings will include the 4663cc petrol V8 and an amazing 2.2-litre 4-cylinder diesel cloaked as the CLS250 CDI, which is rated at 204bhp with a whopping 500Nm of torque. This is the very same engine fitted to the S250 CDI to lower the S-Class CO2 rating to 134g per kilometre. 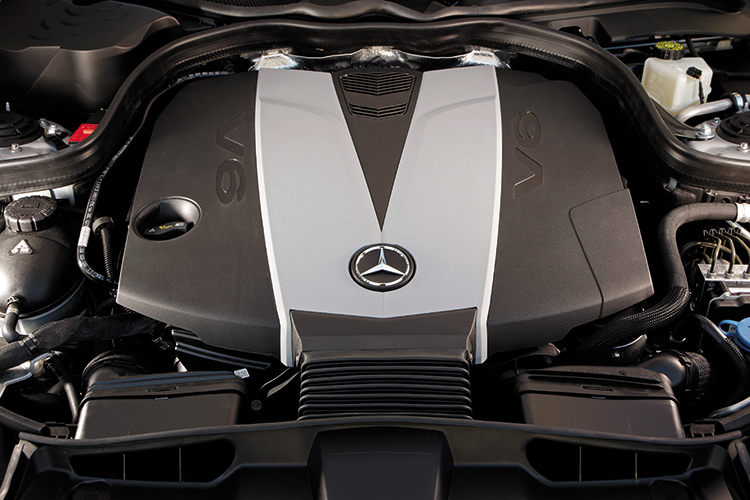 The turbo-diesel CLS350 CDI has better in-town driving characteristics with its massive 620Nm from 1600rpm to 2400rpm. The naturally aspirated V6 needs more revs, but is very refined in the upper registers. Both get to 100km/h in a similar time of 6.1 to 6.2 seconds, with the tiniest performance victory going to the petrol V6. The diesel wins in fuel consumption – 16.4km/litre versus 14.7km/litre on the combined cycle.

The crowning glory of the new Mercedes-Benz CLS range is the CLS500 with the 4663cc V8 engine. It boasts 408bhp and 600Nm of torque, and unsurprisingly, delivers the best straight-line performance, hitting the 100km/h mark in about 5 seconds flat. This inevitably impacts on fuel consumption, but this remains decent at 11.1L/100km. 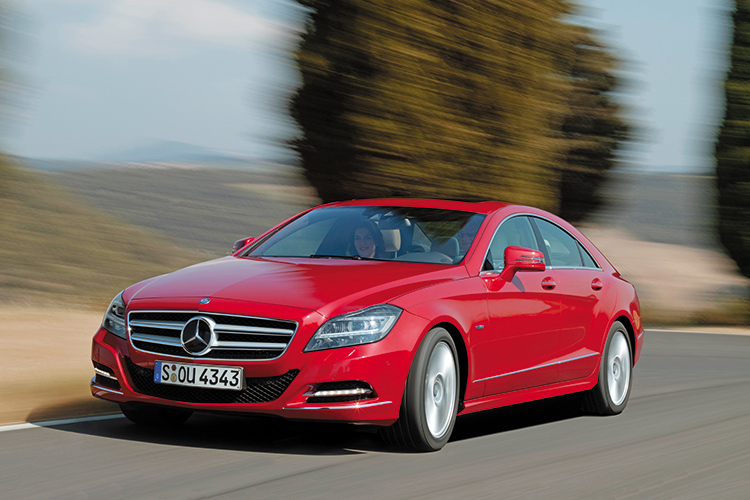 Fine-tuning of the direct-injection engines, coupled with the intelligent 7G-Tronic Plus automatic, allows fuel economy to co-exist with sporty performance. While the car is equipped with paddle-shift controls, the ’box is happiest in full auto mode, even when tackling sinuous mountain roads.

The new Mercedes-Benz CLS is about as large as one would want when taking to B-roads. Its new EPS (electric power steering) sets the standard for other manufacturers. The worm-gear arrangement creates huge torque assistance of 15kN to overcome the forces expected from a big car, such as the next S-Class. This is the first time it is used as a fuel-saving device in a luxury saloon, reducing 7g of CO2/km in the mixed-mode test. 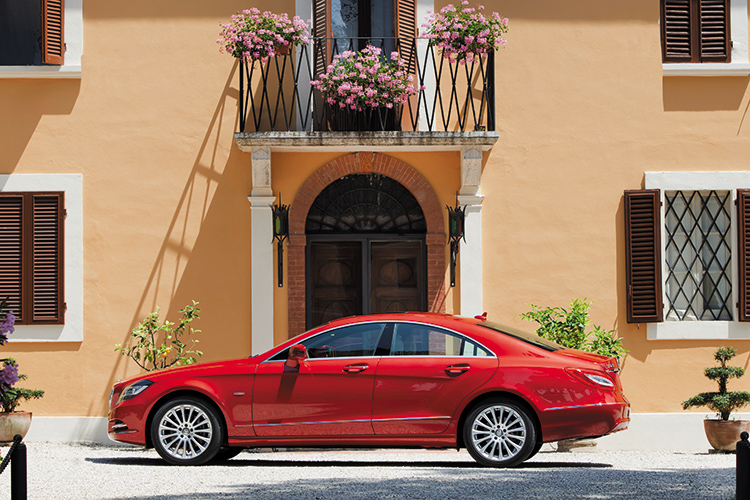 Mercedes-Benz CLS styling is still swoopy, but there is now a certain edginess to the sheet metal.

On winding roads, the steering is more accurate than tactile, as is the German norm. Foibles are not evident in this CLS application, allowing it to carry the “best EPS” title – at least for now. The engineers decided there should be just one clearly optimised setting that reconciles the conflicting needs of directness and effort. The result is a passive variable-ratio system (rather like the one in Porsches), with a slower on-centre ratio that speeds up only when cranked over 90 degrees – just the way we prefer it.

Performance in the CLS350 is adequate, but the engine needs to be revved to deliver. Not that this is any hardship thanks to its refinement.Some 370Nm of torque appears when the revs hit 3500rpm, compared to the 620Nm coughed up by the CDI unit at just 1600rpm. 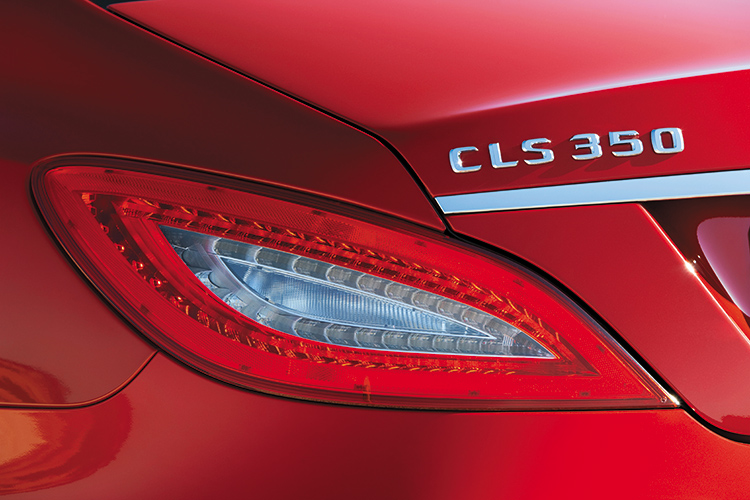 While straight-line performance differs, every model offers consistent handling. The Mercedes-Benz CLS handles excellently for a car that tips the scales at nearly 1.8 tonnes. It flows through the corners, and the rears track the fronts satisfyingly, making the driver feel like a hero. The new Pirelli P Zero tyres take some credit, but kudos to the suspension team for developing a comfortable set-up. A good option, perhaps, would be Airmatic suspension.

The sports seats are a tad gimmicky with their active side bolsters, but they offer considerable support and comfort if you disarm the active function and use the bolsters normally. Rear accommodation has also been improved over the previous Mercedes-Benz CLS, with both headroom and shoulder space now better than before. 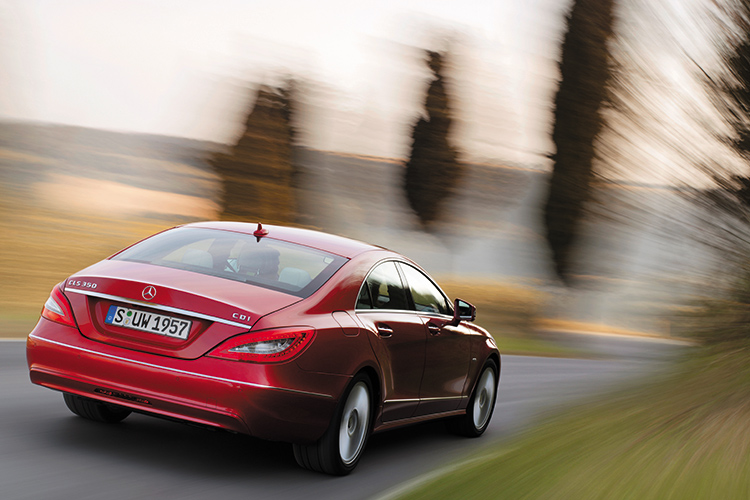 Mercedes-Benz CLS ride is supple and refined, while overall handling is consistently capable.

The new Mercedes-Benz CLS is one mighty desirable saloon, with hardly any drawbacks, except for the pricing (somewhere between the E-Class and S-Class). The car’s excellent handling makes the prospect of the Mercedes-Benz AMG CLS63 an exciting one indeed. But even the base version, the Mercedes-Benz CLS350, does just about everything well, surpassing expectations in its dynamics, especially with the optional air suspension.

At the end of the day, this is a brilliant follow-up on an epoch-making car. 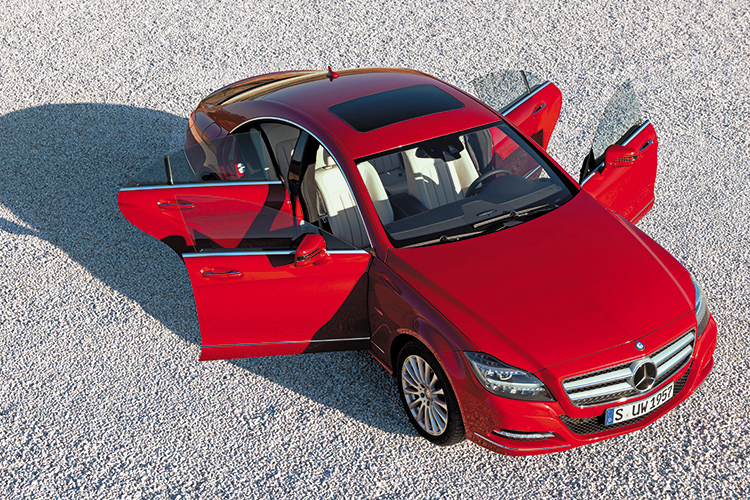 The new model opens the door to greater success for the Mercedes-Benz CLS concept.