Mini Cooper S Convertible is better, but still as wacky as before | Torque
Loading posts...
0 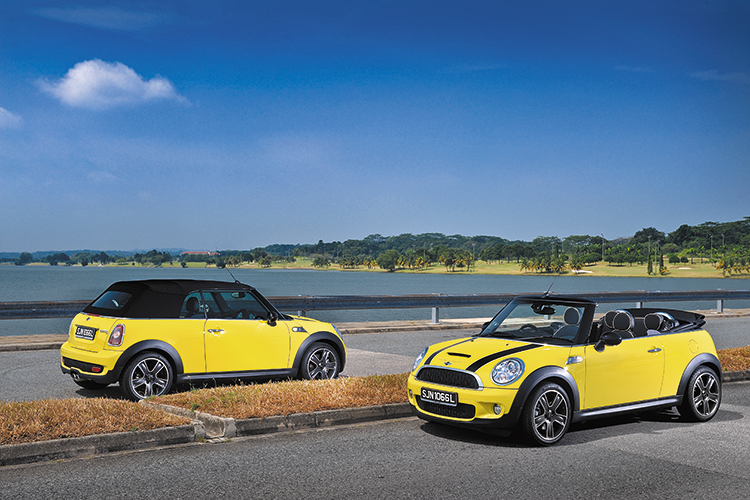 The perfect little car was something the Mini Cooper S Convertible never was.

The modern Cooper S Convertible’s list of blemishes includes the tiny rear view (no thanks to big rollover protection hoops and the roof that stacks above the boot), chassis flex and a jittery ride.

The complaints against its dynamics only show up because the hatchback was so accomplished a handler.

The Cooper S Convertible had a beaming presence that was far more attractive than the sum of its shortcomings.

Fashionistas and every other good-looking person can’t help but gravitate towards one.

It’s little wonder that there aren’t any at the Torque office, then. 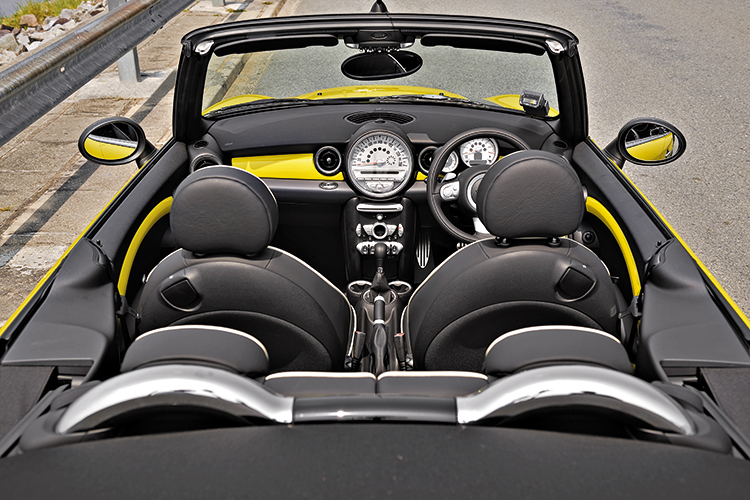 Mini says its latest Cooper S Convertible has taken a very evolutionary path in its development, especially with the design.

That’s a polite way of saying it didn’t have (or dared to try out) any brave new ideas.

So, even though the car here is as new as new goes, it can easily be mistaken for its predecessor because of its styling.

The lemony hue and those black centre 17-inch wheels called Black Star Bullet, by the way, are the few cues that are unique to the Cooper S Convertible.

Going further, the car can be specified with coloured fabric tops (including one that looks like denim), besides black.

A closer inspection will reveal that the belt line is actually higher than the preceding model and the windscreen is more upright.

In relation to the raised profile, the shiny hoops behind the rear seats have been tucked deeper into the body.

They will promptly pop up when the car senses a real danger of rolling over. 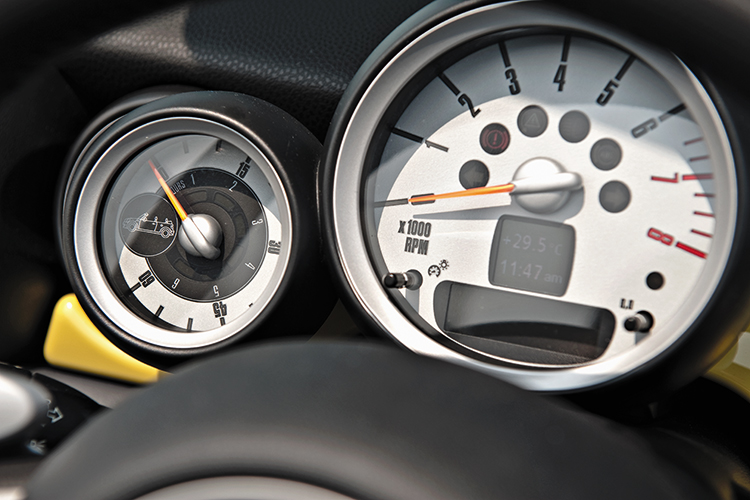 The Cooper S Convertible cabin is very similar to the current hatchback model.

The fittings feel more expensive and substantial than before, and the styling is even more outlandish.

Visibility from the rear-view mirror is marginally improved.

The rear windscreen is still very shallow (when the roof is up), and the stack of fabric when travelling al fresco blocks vision.

As with the previous model, there’s an interim mode that allows the top to roll back only halfway to work like a sunroof, letting in a bit of vitamin E.

Unique to the Cooper S Convertible is a new thingamajig that manages to outshine the enormous speedometer on the funky scale.

Sited to the left of the tachometer on the steering column is a clock called the Always Open Timer. 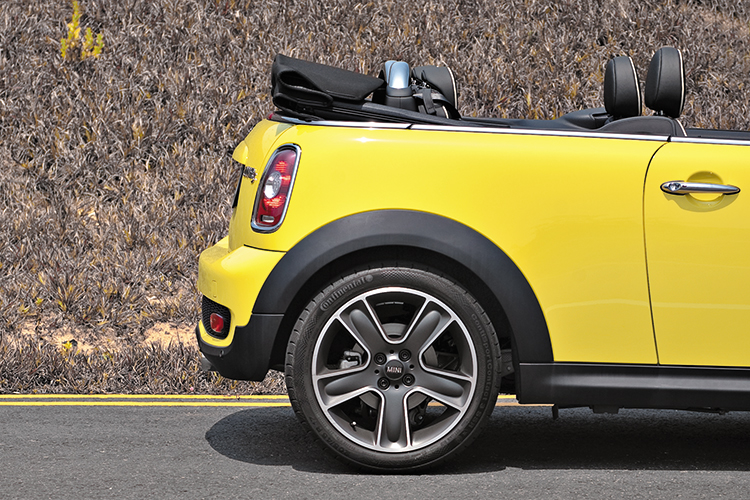 Designed to measure the time that the Convertible spends with its roof down, it’s an optional item and is in the running for the silliest feature to be seen in a car cabin.

What this did to the competitive people at the office was make them challenge each other in a competition to register the longest time on the Always Open Timer.

This explains the unusual tans and terrible headaches we had in the middle of the afternoon.

The car should come with tubs of SPF50+ sunblock as standard or, better yet, you should be able to dispense the stuff from a nozzle or something!

The Timer is a frivolous feature, that’s for sure.

But it is all in the name of fun and goes well with the decidedly un-serious nature of the Convertible.

The only real gripe is the location of the meter itself, which blocks one of the air-con vents.

This is not a problem with left-hand-drive cars –  a sign of the designer’s bias, perhaps? 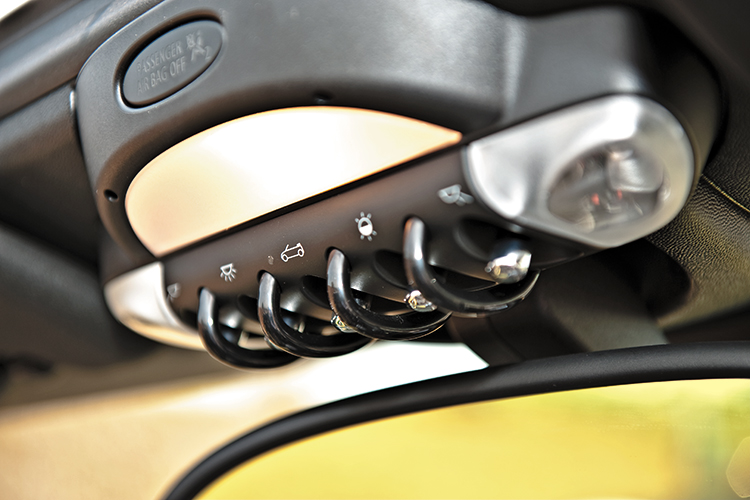 Toggle-style switches are another one of the Mini’s wacky styling cues.

Remember that the Mini first began as an engineering innovation before evolving into the chic lifestyle accessory that it is today.

The Convertible is not short on real substance beyond its wanton wackiness.

For a start, the turbocharged 1.6-litre engine in the Cooper S Convertible version is a marvel.

There’s plenty of torque to work the front wheels hard, while the surge is both relentless and addictive.

Paired to a 6-speed Aisin AW automatic transmission, the car feels ballistic, with every gear change delivering a crisp and mighty punch.

Yet it’s frugal, with a claimed consumption figure under the combined cycle of just 14.1km/L.

Even after a bout of lead-footed driving, the test car returned a figure in the region of 11km/L or so – impressive.

In typical Mini-style, there’s a fairly exciting exhaust note to match the fireworks. 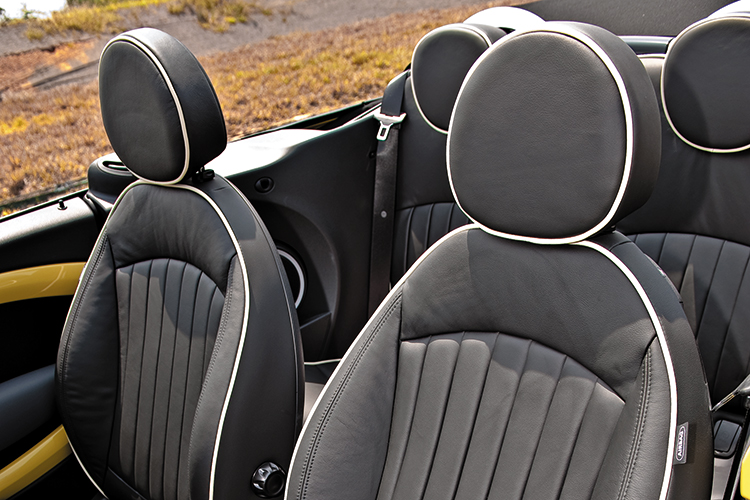 (It does get a bit boomy when one drives with the roof down while spinning around at 2000rpm, though. The solution? Simply rev it higher!)

The sense of heft about its controls and impossibly quick steering rack on the previous model lend some weight to the Mini’s claim of having go-kart-like handling.

The new platform has far more linearity and demands less to drive.

It is still sharper than most cars today, with a ride that borders on the firm side (and you’d expect this from the rubber-thin, run-flat tyres).

But there is certainly a bit more pliancy than before.

It’ll be easy to dismiss the set-up as Mini going soft, especially with its more focused models like the Cooper S hatchback and the mighty JCW.

The added suppleness also caters to the Convertible’s clientele, who are probably more concerned with styling than handling limits anyway. 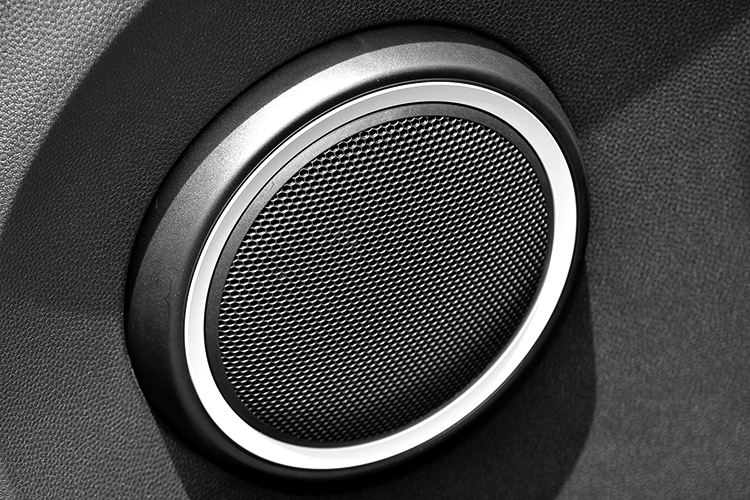 Thumping good speakers, the Convertible has.

Despite the extensive effort to compensate for removing the roof, the Cooper S Convertible has lost some of the rigidity of the hatchback body shell.

This is shown with a shivering rear-view mirror when driving over seemingly smooth roads.

As with the other Cooper S models, which includes the Clubman, there’s a hint of torque steer when powering out of corners or accelerating over uneven roads.

The electronic guardians are more than capable of keeping the car out of trouble, though (unless you deliberately disengage them by holding down the switch). 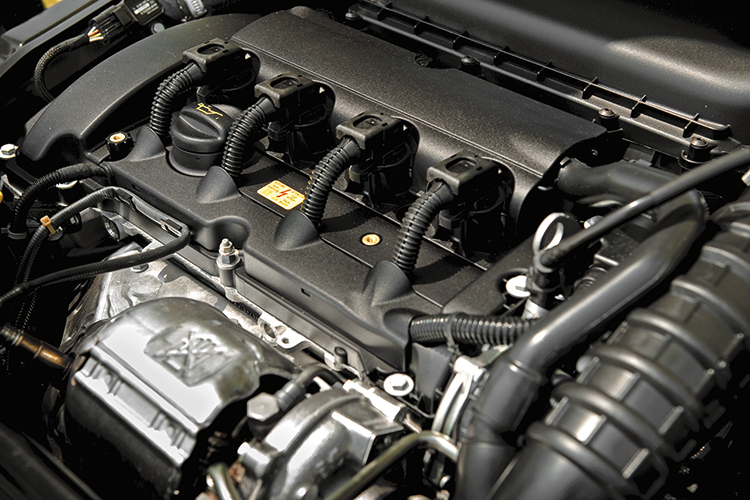 Chances are the standard suspension setting is as firm as it is practical on our roads.

In the standard chassis tuning, the Cooper S Convertible is still a really quick and enjoyable tool for winding roads.

Backed by the bristling engine, it’s easy to find and maintain a brisk rhythm that’s as exhilarating as the hatchback to the keen driver.

The difference, though, is the added benefit of baking one’s scalp while having fun. 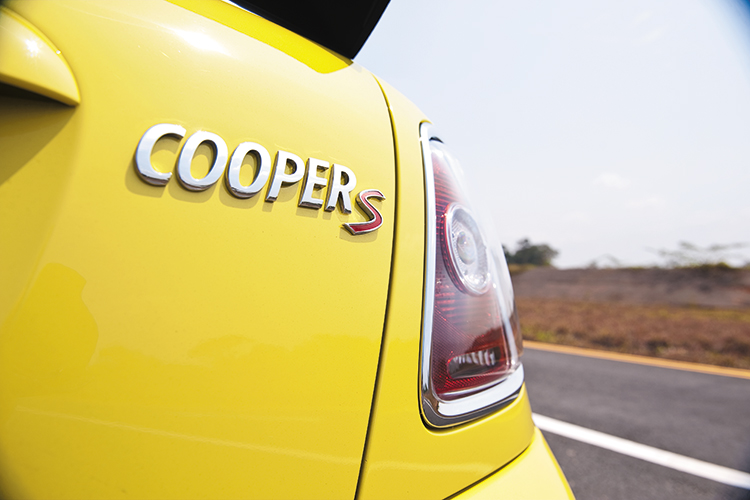 25 years of the MINI Convertible