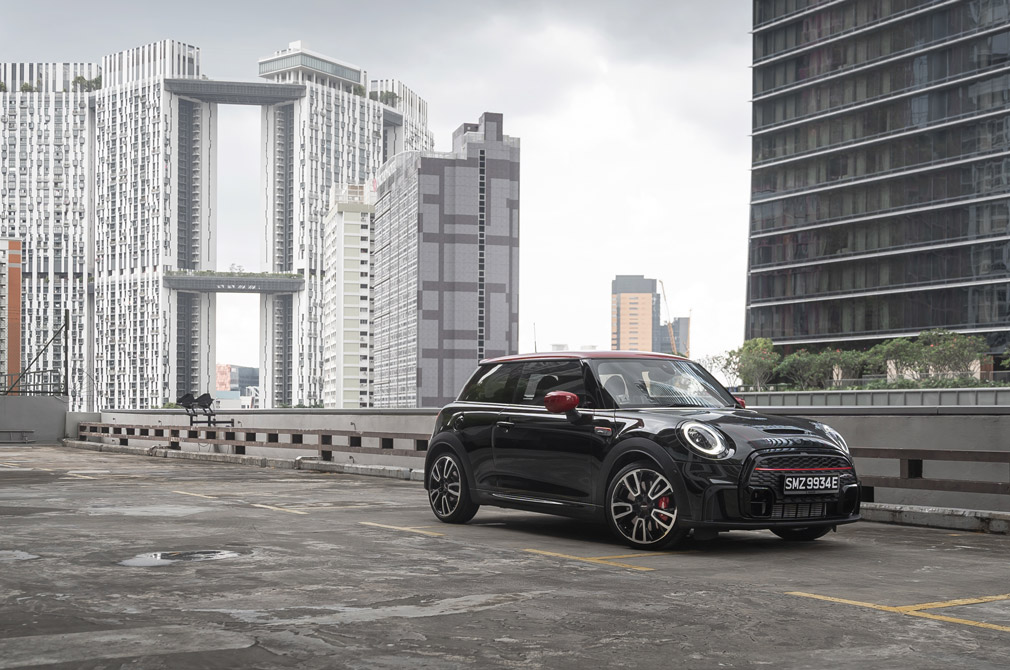 I love tiny cars. Okay, I love tiny cars in Singapore. In the US, where the roads are as wide as yo momma and equally pockmarked, the Cadillac Escalade is utterly fit for purpose.

Here, though, where nippiness and wieldiness rank highest in the list of desirable automotive attributes, the MINI JCW could very well be the G-spot.

MINIs, at least the spiritually pure three-door hatchbacks, have always been all about colourful, vivacious, spunky, darty, zippy fun. The JCW has all manner of upgraded hardware underneath, over and above the Cooper S.

Beyond the healthy but not mind-blowing 231hp on tap, the chassis has been given additional doses of adrenaline.

New for 2021 is a frequency-selective damping setup that is supposed to take the edge off sharper, frequent bumps but enhance spirited cornering. 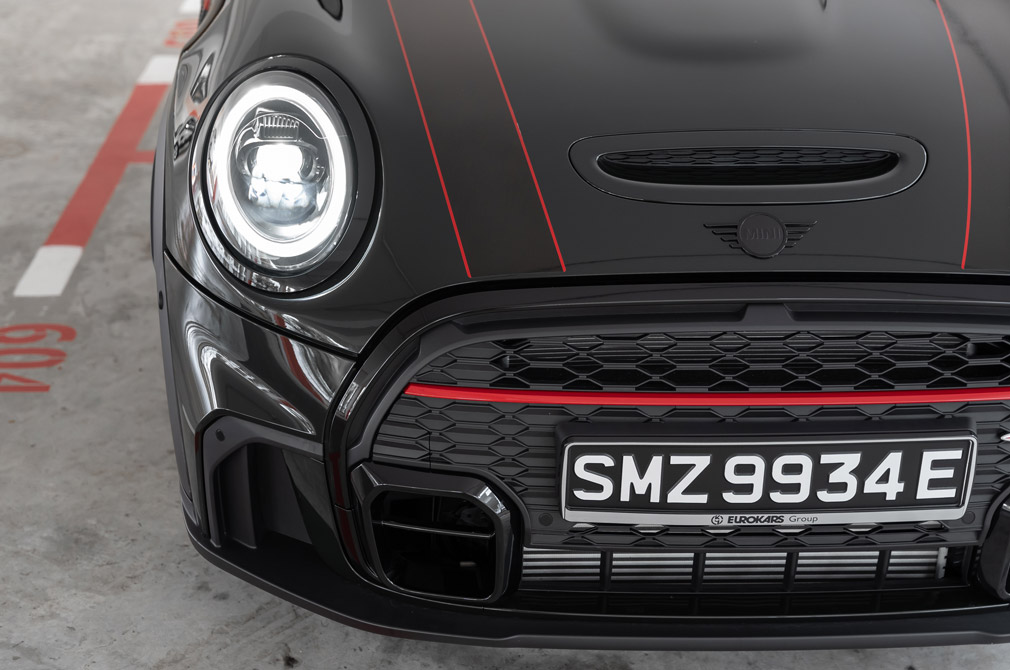 Hence so it is that the JCW’s appearance is a smorgasbord of cheeky detailing.

Some effort has been made during this most recent facelift to reduce busyness in the styling, but the MINI remains the last thing from minimalist.

There is no doubt that when one of these yipping visages appears in the rear-view mirror, it intends to go scampering past. Merely walking towards one in the carpark makes your heart chuckle a little.

Changes to the interior amount to updated infotainment graphics and a cleaner, mostly digital instrument cluster. If the fundamental layout remains recognisable from the model’s 2014 gestation, it looks as fresh today as it did back then. 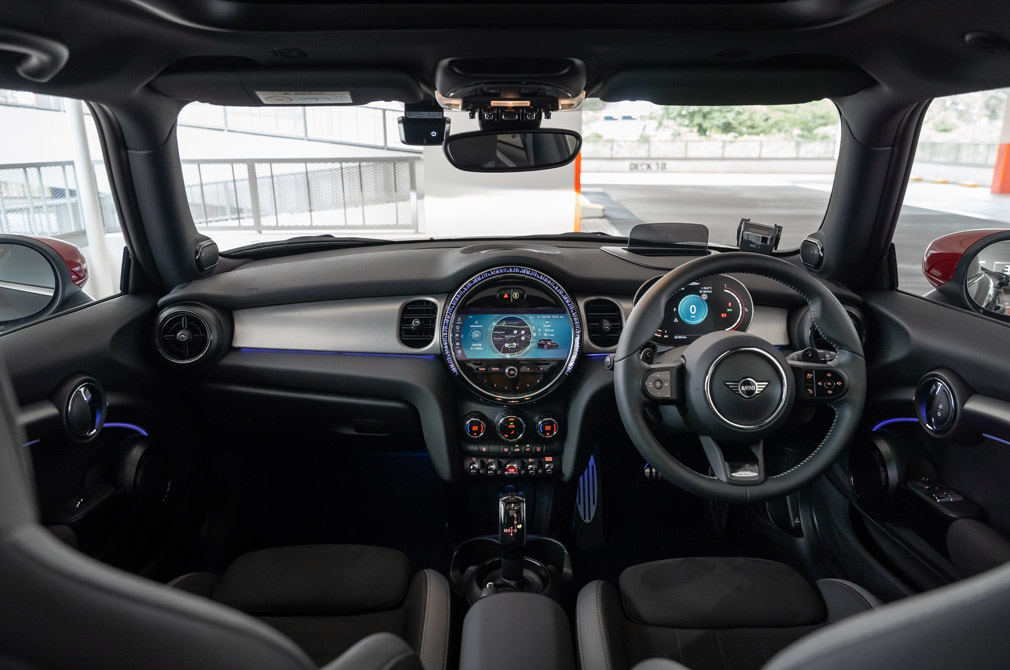 This generation of MINIs always had insides which feel premium and playful in equal measure. It is a childish car but quite clearly an expensively childish one.

Let a terrier puppy off its leash, and it will burst away skittering, scrabbling, scampering. Mash the throttle at the lights or in the middle of a corner, and it is easy to make the front wheels chirp before the car shoves off with real vigour.

A hint of lag is perceptible, especially if caught in the wrong gear, so using Sport mode to keep the powertrain true to the car’s advertised personality is advised.

Despite its impish size, the JCW is not the kind of car you drive with your fingertips. Firstly, the steering is quite weighty and the rim is thick, a harbinger for the starchy sense of substance that pervades the car.

More importantly, despite the dimensions, the car is actually fairly hefty. This is thus no Alpine A110-esque Natalie Portman ballet dancer. 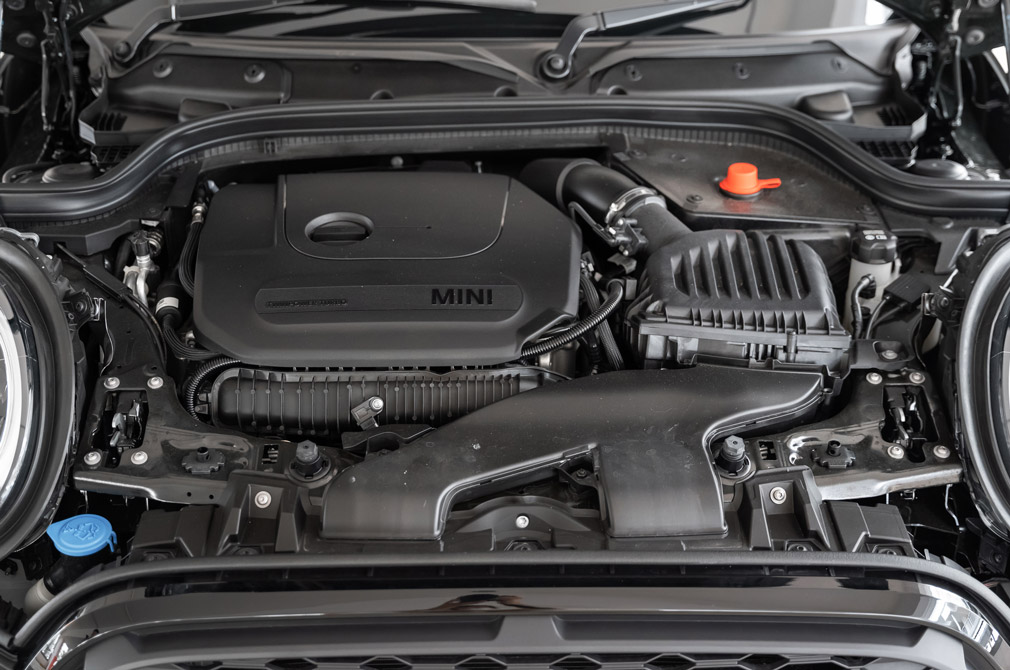 Think of it more as Donnie Yen’s Ip Man. Not the whole man, just his fists. You don’t glide and flit daintily through traffic, you jab and punch your way through.

This is entirely in keeping with the JCW’s explode-from-corner-to-corner, hyper-caffeinated canine demeanour.

If you had such a pet, you would often see it burst through a doorway, paws manically scratching at the floor before it tackles you and licks your nose off. Your mind is extremely unlikely to wander off in a daydream at the helm of this little devil.

The JCW I realise, as it pulls off yet another hilarious little four-wheel drift through a bend, is quite the addictive drug. 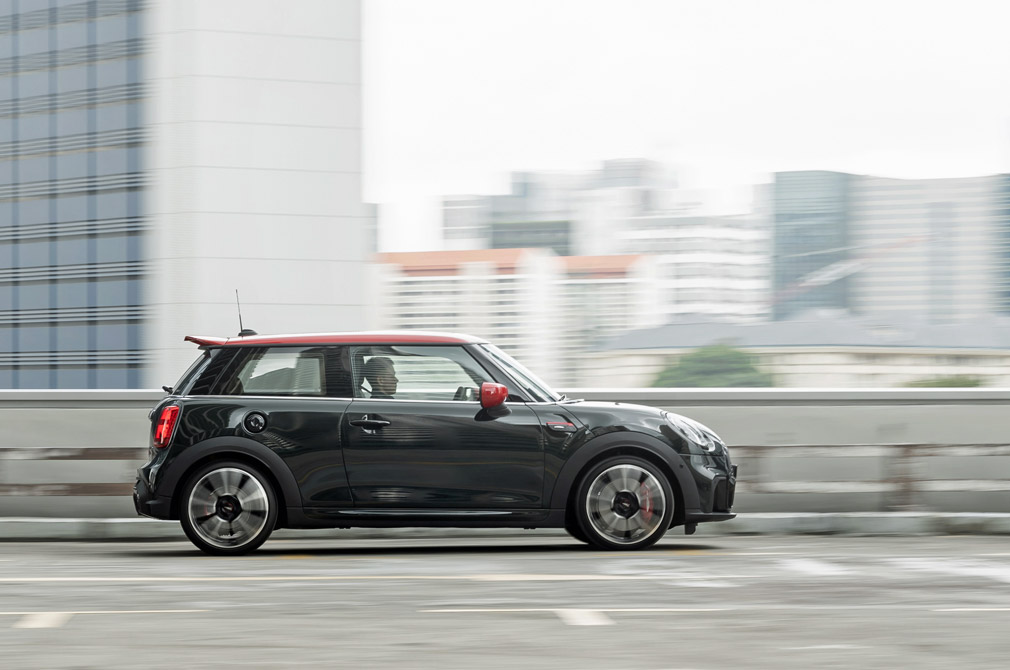 Yes, a four-wheel drift. That is the sort of thing you can only do in the smallest, most raucous, and crucially, most balanced of cars.

The MINI counts itself as all three, the lattermost more due to its miniscule wheelbase, instinctive reflexes, and having its entire mass seemingly congealed in a single spot.

BOOM! A manhole cover sends a shockwave through your spine. It’s fine, it’s fine. It is, again, in keeping with the car’s loveable shtick. In an X5, that would be cause for a serious markdown.

In a MINI JCW? It’s all part of the fun. You see what happens when a car gets under your skin? You make excuses for it.

My dog is the perfect dog and an angel and if you say otherwise, I will punch you. 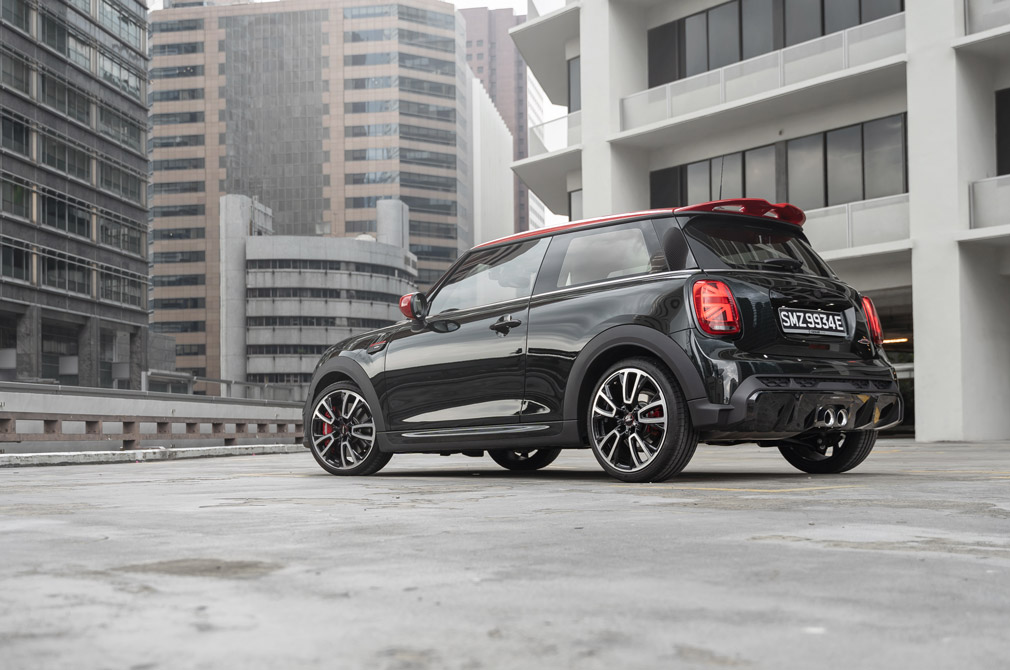