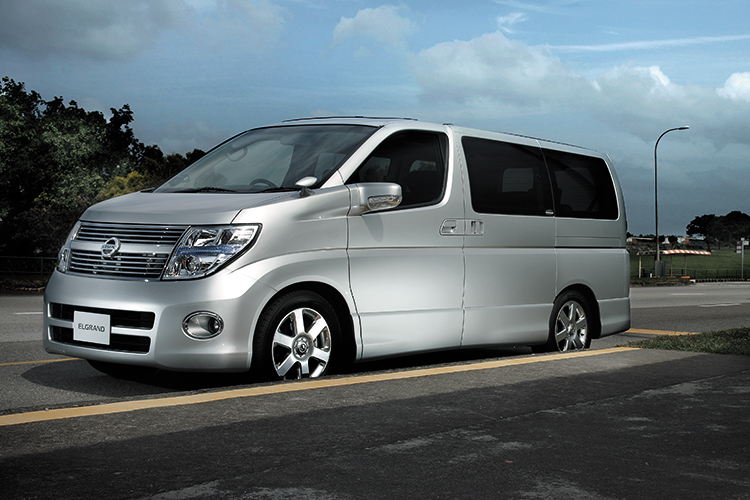 Ever since Chrysler’s and Renault’s claims to inventing the multi-purpose vehicle, the genre has burgeoned with countless alternatives.

Today, it’s as broad a term as a body style like “sedan” or “hatchback”.

On one end of the scale, there’s the 1.1-litre Chinese-made, pint-size Hafei MinZ, which goes for a song.

While Nissan has the Lafesta (which is a relatively compact MPV) and a larger model called the Presage (it’s newest offering), the Elgrand is the daddy of them all. Elgrand cockpit features a TV in the centre, just like at home.

It is, in a sense, Nissan’s idea of an R-Class.

Like the Lafesta, the Elgrand was conceived as a dedicated Japan-only model, where it rubs sliding doors with other leviathans like the Toyota Alphard and the Honda Elysion.

Styling-wise, the Elgrand is quirky as only Japanese Domestic Models can be.

Instead of hiding its van-like boxiness as Mercedes did with the R-Class, the Elgrand relishes in its slab-sidedness. 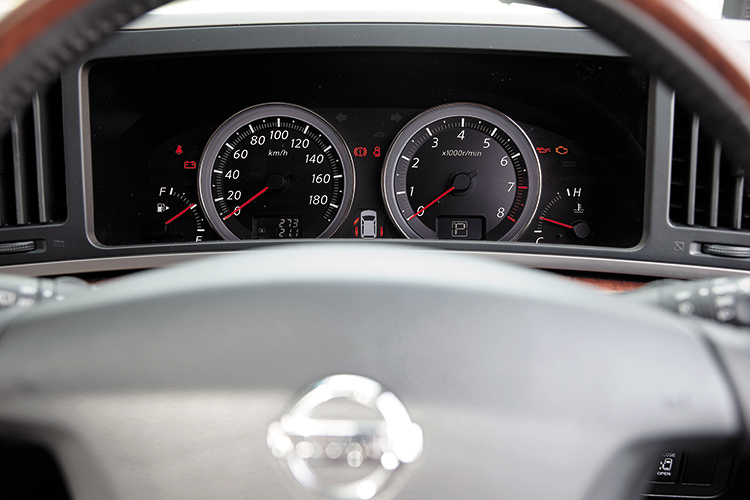 One strongly defined signature line runs along the flank to accentuate the Elgrand’s 4.8m length.

Up front, there’s a righteously upright grille, laden with shiny chrome bars reminiscent of the big trailers that ply the endless interstate highways of the US.

The wing mirrors are chunky objects designed to give maximum rearward vantage. 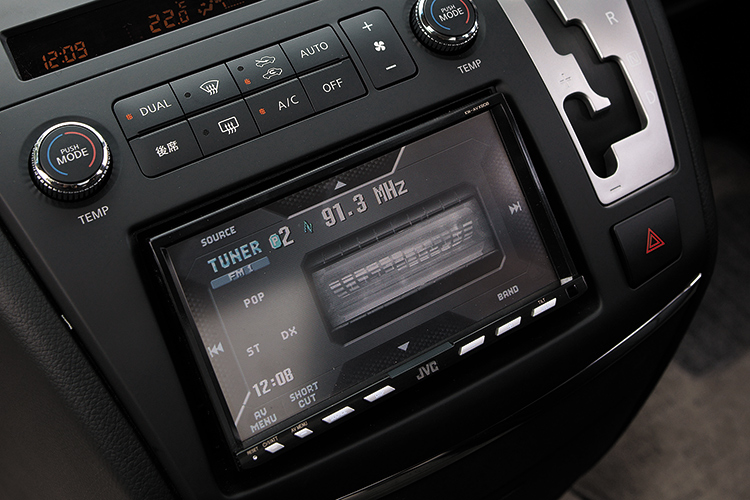 Dual-zone climate control and decent sound system are part of the Elgrand’s aspiration to be a home.

An additional mirror, perched on the kerbside fender, works like an inverted periscope to help the driver judge corners while working the slow steering rack (lock-to-lock takes more than 3.5 turns).

As they do on the mighty Toyota Land Cruiser, the little helper mirror is essential for scrape-free negotiations around tight spots.

Thanks to the boxy lines, the rear of the vehicle is easier to judge. But the locally fitted reverse camera is not much use, as the angle it captures is awkward.

This, in case you haven’t noticed, is no Latio. 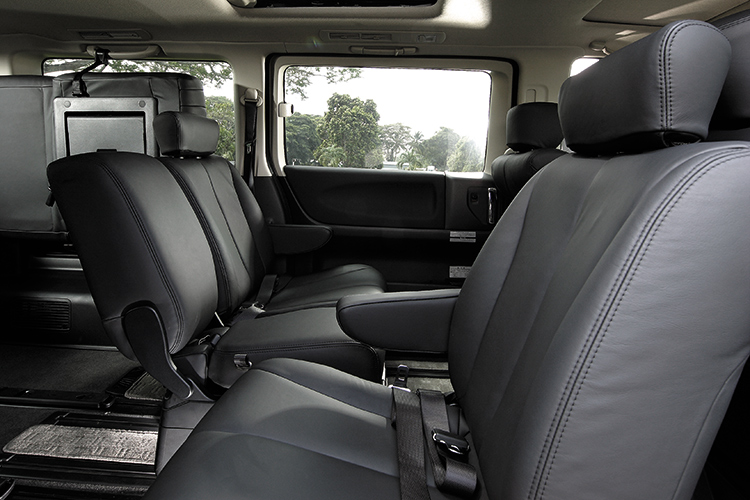 Motivating this XXL vehicle is the 2.5-litre V6 engine from the Teana.

For the Elgrand’s purpose, the engine is paired to a traditional 5-speed automatic with manual sequential control instead of a CVT like the Teana.

Straddled by its two-tonne kerb weight, the Elgrand isn’t fast by any standards, although it feels faster than the claimed 14.6 seconds.

Despite its barn-like exterior, the Elgrand conducts itself amicably when on the move.

There’s a little bit of wind noise at expressway speeds, particularly around those elephantine wing mirrors and A-pillars. 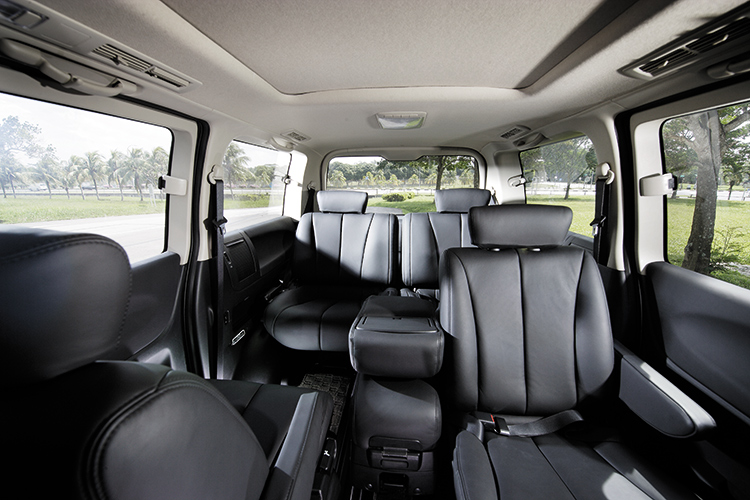 Elgrand cabin is a master of all the necessary MPV tricks.

But things are generally peaceful on board.

The soft suspension setting expectedly reveals almost comical levels of body movements during lane changes and quicker cornering, but at least there are very minimal signs of exaggerated squatting during hard accelerations.

Whatever the case, leisurely will likely be the modus operandi on board the Elgrand.

While there’s a steering wheel and shift lever, as you’d expect in a car, they are found on something that bears more resemblance to a living room cabinet than a car’s dashboard.

The instrument dials sit in a contraption that looks like a home theatre system or a really big PSP game player. 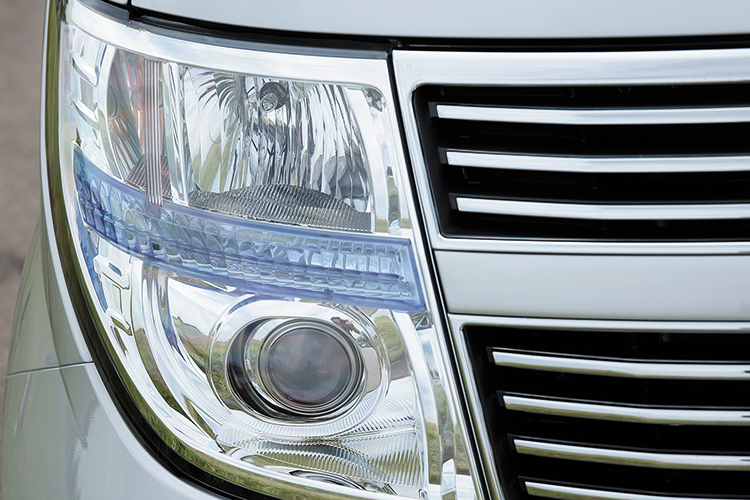 Instead of sporty bucket seats, the driver lounges on a luxurious sofa, complete with his own adjustable armrest.

It’s the same story with the other seats on board the Elgrand – all of them look and feel incredibly comfortable.

Little wonder that a car like this is popular with celebrities travelling to filming locations.

In true MPV fashion, the cabin is capable of a myriad of configurations, ranging from a full eight-seater to a cavernous load hugger that will shame many a commercial vehicle. 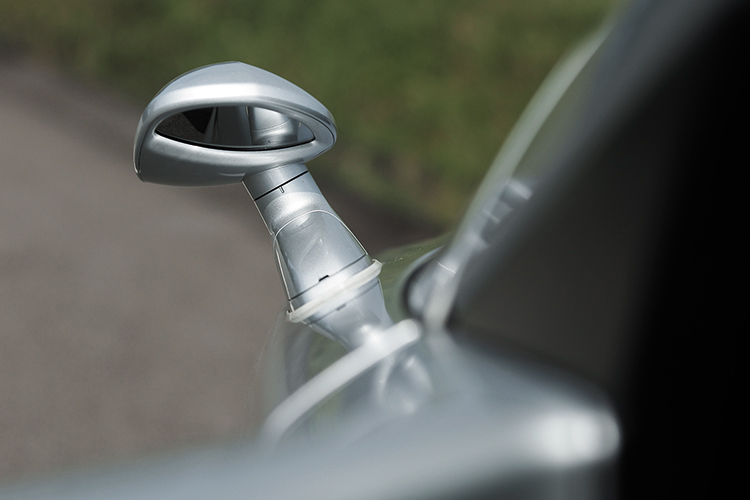 Little fender mirror is helpful for looking at the kerb.

Given the size of the seats, it takes a bit of negotiation to morph from one permutation to the next.

Freeing up cargo space in the back demands extra huffing, as the two chairs have to be flipped upwards to “hang” beside the windows.

It’s something owners of Land Cruisers and early-generation Land Rover Discovery are familiar with.

The biggest party trick lies in the two captain’s chairs in the second row. 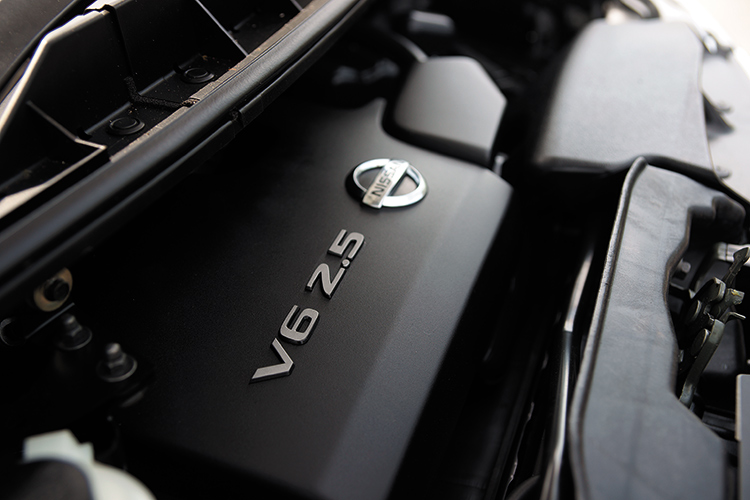 They can be independently rotated to face the rear, with the centre console acting as a table – a style similar to the back of a classic London Cab.

(It’s not clear why anyone will want to travel with his or her back facing traffic while sipping tea, though.)

The job of keeping this incredible crevice cool lies in not one but two separate climate control systems accessed through the digital interface on the dashboard.

The driver and front passenger can have their own preferred setting, while those in the back have another (complete with separate blower). 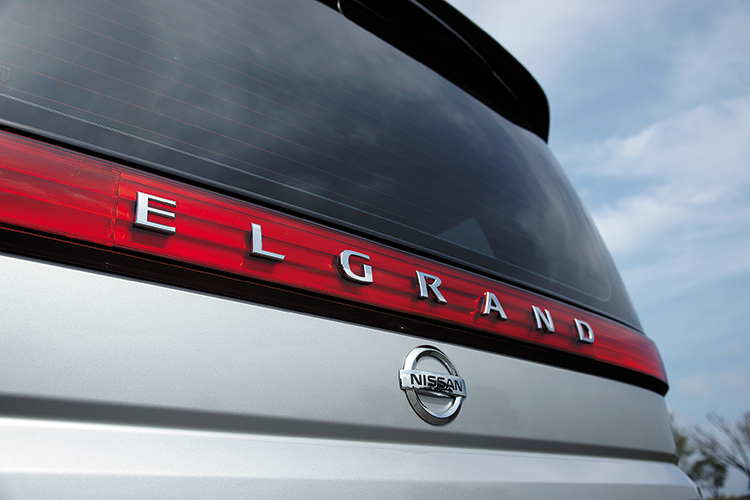 Obviously, the Elgrand has been conceived for long hauls.

So it comes as a bit of a surprise that there is no cruise control function – meaning, the driver has to keep working his foot for the entire journey, which can be tiresome (the Elgrand’s 76-litre fuel tank can theoretically last 640km before it needs a top-up).

A journey to the end of the earth?

The Elgrand is definitely a candidate to do that. 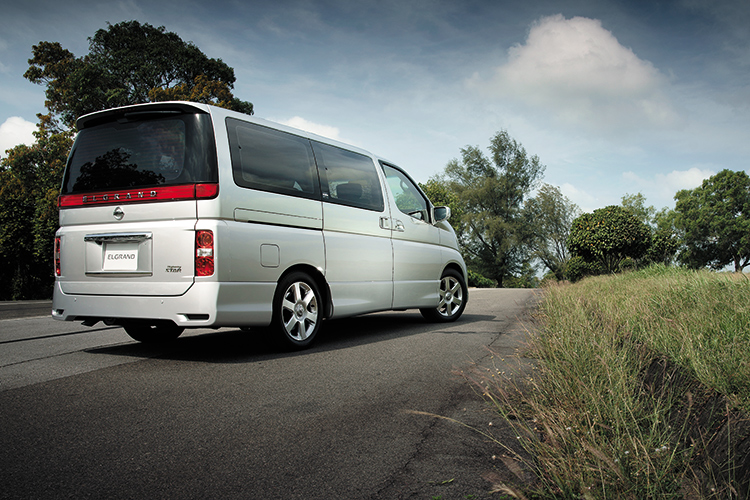 Why I grew to love big business vans