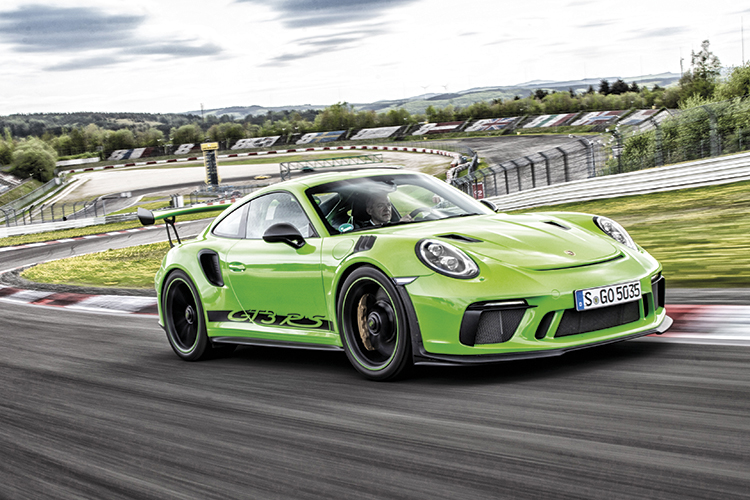 The Porsche 911 GT3 RS is no greenhorn when it comes to keeping rampant performance under control and communicating clearly with a quick driver.

There, in the email invite to the press drive of Porsche’s latest 991.2 GT3 RS, was the thrilling promise – “test drive at the Nurburgring”.

Driving the legendary, fearsome 20.8km-long Northern Loop (Nordschleife) of the Nurburgring racetrack in Germany is on every petrolhead’s bucket list. And to do it in the new GT3 RS, no less – I thought Christmas had come early.

But a few days before my trip, the sheepish clarification came – I would not be sampling the GT3 RS on the fabled Nordschleife, but on the newer, shorter and more sanitised Nurburgring Grand Prix track next door. 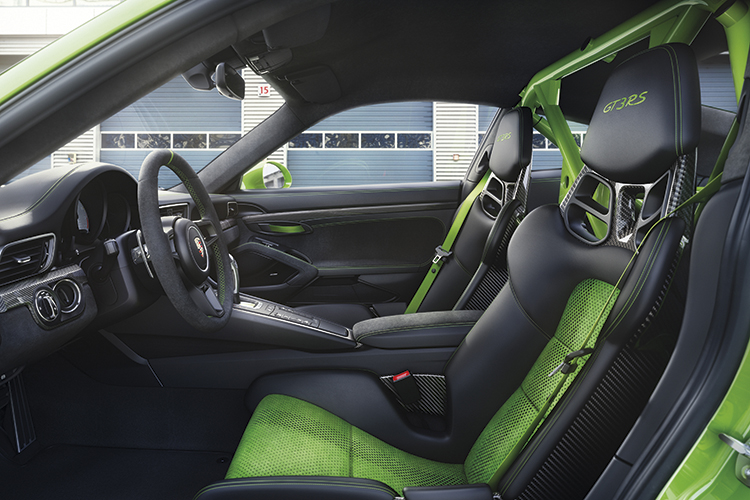 Visiting the Nurburgring and not driving the Nordschleife is like going to Morton’s and just ordering the salad, or travelling to the Maldives and spending your whole stay indoors watching TV. Suddenly I was a lot less thrilled about the trip.

But then again, Porsche probably knew that letting a bunch of over-eager journos loose in this devastatingly fast car to acquaint themselves with such a daunting track was not a great idea. For the GT3 RS, lest we forget, is effectively a road-legal track car, an even more extreme device than the already hardcore 911 GT3. Just how many road cars come with a roll cage, as the GT3 RS does?

Naturally, Porsche has upped the ante with the latest version. Mounted in the rear is a hotter version of the all-new 4-litre flat-6 engine which debuted last year in the current GT3, which revs even higher than before (to 9000rpm, while the engine in the previous 991.1 GT3 RS stopped play at 8800rpm). 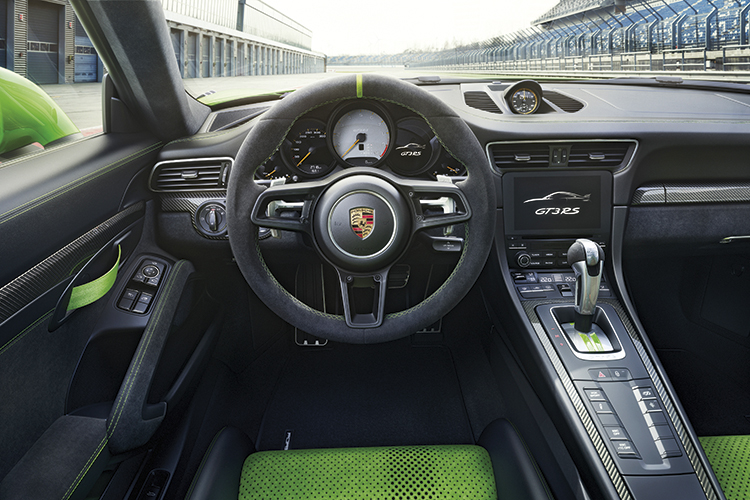 The engine’s hardware is identical to that of the GT3, but a remapping has liberated another 20hp, so that it now delivers 520hp – coincidentally also 20hp up on the 991.1 GT3 RS.

All that urge is channelled exclusively to the rear wheels, as before, via a 7-speed PDK dual-clutch gearbox. Thus powered, the car explodes to 100km/h in 3.2 seconds (beating the 991.1 GT3 RS by 0.1 second) on the way to its 312km/h top speed.

Porsche has tweaked and fettled almost every aspect of the GT3 RS to keep that rampant urge under control. 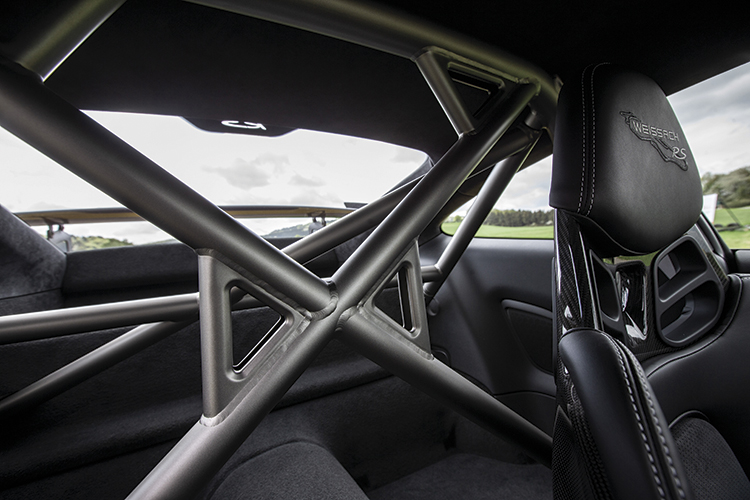 The more visible changes are a taller rear wing (which is now adjustable) and more protuberant slats over the front fender air-vents (both borrowed wholesale from the even more extreme, turbocharged 700hp 911 GT2 RS), a pair of small “NACA” air intakes punctuating the front bonnet to channel cooling air to the front brakes, a more prominent front spoiler lip and wider side skirts.

Together with improved underbody aerodynamics and a resculpted rear diffuser, they help the new car generate 144kg of total downforce at 200km/h, over double that of the GT3 and 40% more than the old GT3 RS achieved. At 300km/h, the downforce figure rises to an immense (and racecar-like) 416kg.

Under the skin there are stiffer springs (twice as firm as before in front and 50% harder at the rear), solid-mounted front and rear subframes, and ball-jointed suspension arms and links for more accurate suspension control and sharper responses. 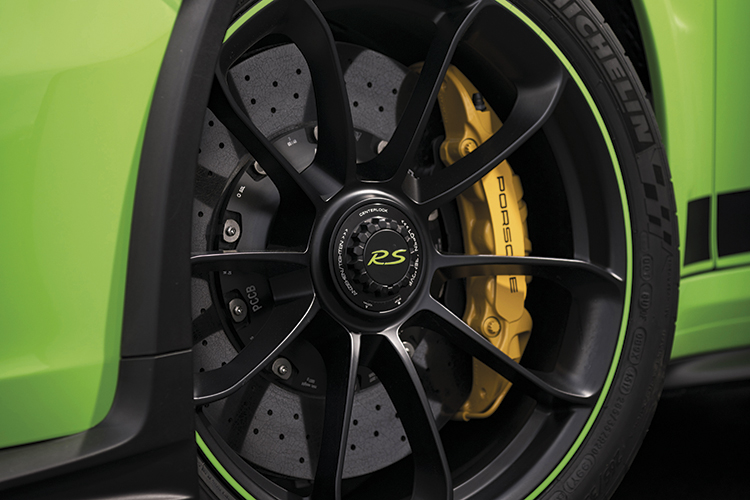 I sampled the car exclusively on track, so there was no chance to assess the effect that the stiffer springs have had on ride comfort, but given Porsche’s track record at combining brilliant, roll-free handling with a firm but well-controlled ride, I would expect the GT3 RS to ride very firmly, but without lapsing into harshness.

As before (and like the GT3), the GT3 RS also has rear-wheel-steering for extra agility in tighter turns and added stability through the faster ones. The dampers have their familiar Normal and Sport modes depending on how ballistically you want to be driving, and the car also features Porsche Torque Vectoring Plus (PTV Plus) with an electronically controlled rear differential lock to maximise traction and rear-end stability under lateral acceleration. 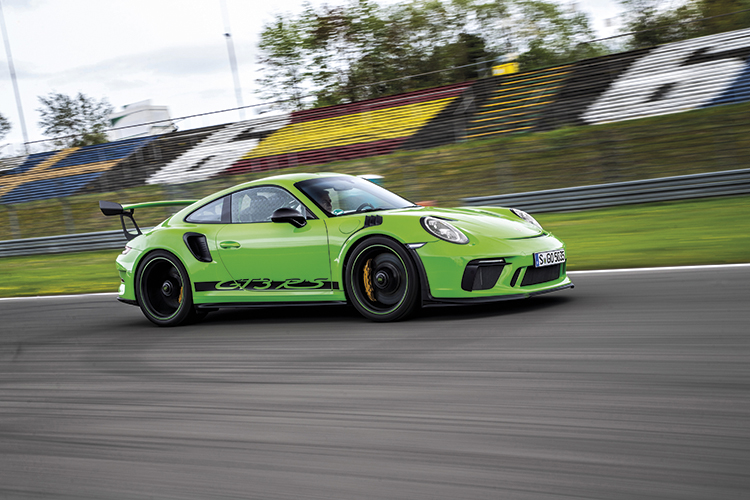 The Porsche 911 GT3 RS dances through chicanes, flings itself into tight turns and remains planted in high-speed corners.

On the day of our drive, the circuit was slick in parts thanks to an on-off drizzle, making me almost thankful to be on the tamer Grand Prix track instead of the Nordschleife.

The car barely seemed to notice the weather though, howling thrillingly to its 9000rpm redline time and again without a hint of wheelspin, the PDK gearbox punching in each successive gear the instant the paddle shifter was tugged, delivering acceleration so epic that the straights were devoured in a matter of seconds.

And as each onrushing corner loomed, a shove on the reassuringly firm brake pedal had the huge (optional) ceramic-composite brakes wiping off all that speed as surely as if a giant parachute had just been deployed. The Porsche 911 GT3 RS may be a beast, but Porsche has trained it well.

The benefit of the GT3 RS’s impressive downforce numbers was evident in the track’s full-commitment, high-speed bends where the GT3 RS remained utterly planted, even with the throttle pedal pinned to the floor.

And it then flaunted its agility by dancing through the circuit’s fast left-right chicane at three-figure speeds without the tail ever stepping out of line, and flinging itself rabidly into the tighter turns, without a hint of understeer. All this on a track which was still damp in places.

The steering was immensely communicative, faithfully telegraphing the state of the tyres’ purchase and never leaving me guessing if the front end was going to grip or slither wide. 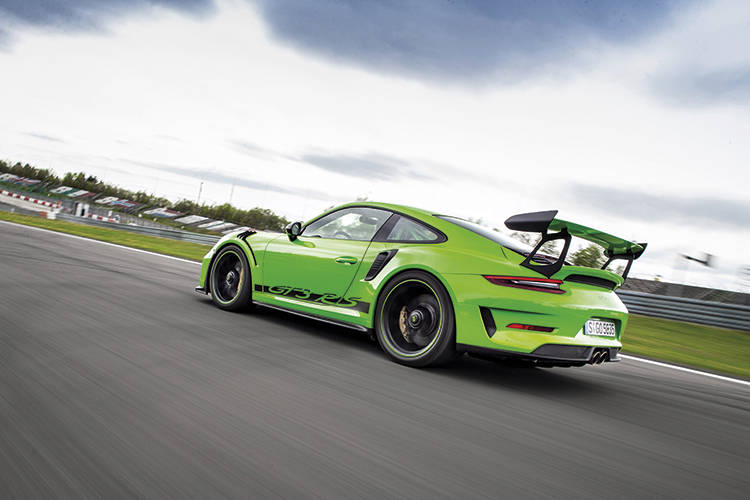 And even on the few exploratory ventures I made beyond the massively high limits of adhesion, the car remained benign, either four-wheel-drifting gently wide, or edging its tail out progressively under power.

After just a couple of laps, my initial trepidation at tackling the track in this wild-looking animal had melted away, replaced by huge trust in the car’s ability and a sense of bewildered wonder at the extent of Porsche’s achievement. 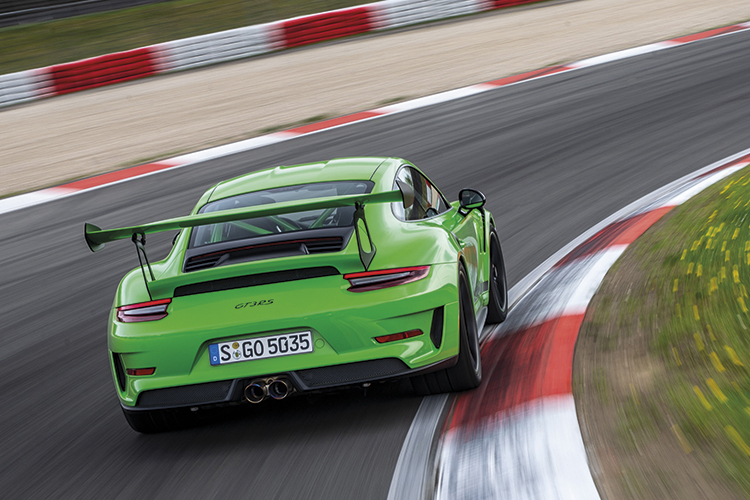 To put that achievement into perspective, just a week before my drive, Porsche’s own racing ace Kevin Estre had hurled the new sports car around the Nordschleife in a physics-defying 6 minutes and 56.4 seconds – the third-quickest time ever set by a production car at the track and just 9 seconds behind the record, held by Porsche’s own 911 GT2 RS which boasts 180hp more. And to add further context, it also bettered the lap time of the 991.1 GT3 RS by a scarcely believable 24 seconds.

So I may not have driven the Nordschleife, but so epic is the new 911 GT3 RS that driving it deserves to be a bucket-list item in its own right.