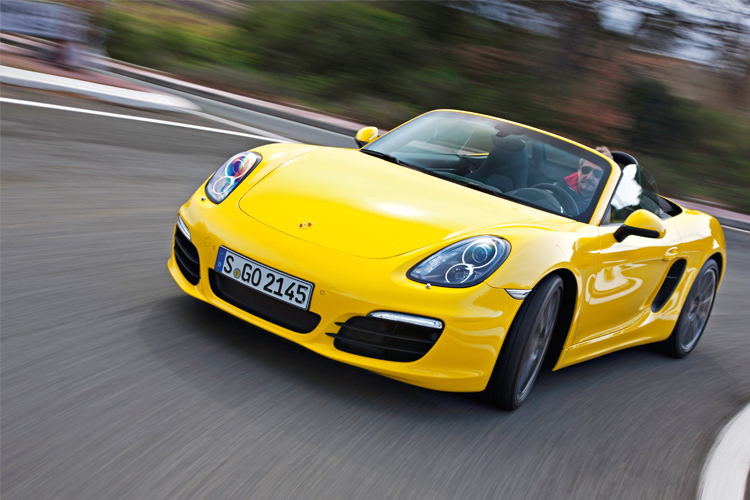 Specified with PDK and Sport Plus, the Porsche Boxster S can dash from zero to 100km/h in a scorching 4.8 seconds.

Barely has the new Porsche 911 Cabriolet been launched, than a deadly rival has emerged. That’s no big deal – the sports car arena is a hard-fought, unforgiving place. But what is a surprise is that this challenger is from within. Because with its new Boxster, codenamed 981, Porsche may just have unwittingly targeted the 911 Cabrio – it really is that good.

Approaching it, the reborn Boxster looks broadly the same as before, but also different. It is instantly recognisable, with similar general dimensions and proportions to its predecessor, but with detailed changes – the newcomer sits 13mm lower, its wheelbase has been extended by 60mm, the base of the windscreen stretches further forward and the roofline extends further back, for a shorter rear deck and a less cab-forward silhouette. Its tracks are significantly wider – by 40mm at the front and 18mm at the rear. There’s no increase in width, however, so what you get is a more purposeful stance, with the wheels now sitting flush with the bodywork.

Compared to the rather soft-edged previous Boxster, the styling details are now more assertive. The headlamps are more angular than on any recent Porsche and contain internal elements stacked vertically – Porsche says it’s a nod to the 908 racecar of the early ’70s. There is now a deep scallop in either door leading to the trademark Boxster air intake ahead of each rear wheel. The car’s shoulder-line still arcs gently over the rear haunches and then curves down to meet the rear bumper, but this time there’s a visual fillip – the spoiler that spans the trailing edge of the boot lid now extends laterally into the tail-lamps, for a very distinctive appearance.

There is more style and substance inside, too. Materials have been vastly improved and the cockpit now feels beautifully constructed and cohesive. As with the new seventh-generation 911, the centre console inclines upwards towards the fascia, bringing the gear knob and minor switchgear closer to hand. The manual gear lever itself is set a tad too far back for easy wrist-flick action and the three pedals are slightly offset towards the car’s centreline, but apart from that, the ergonomics is faultless. 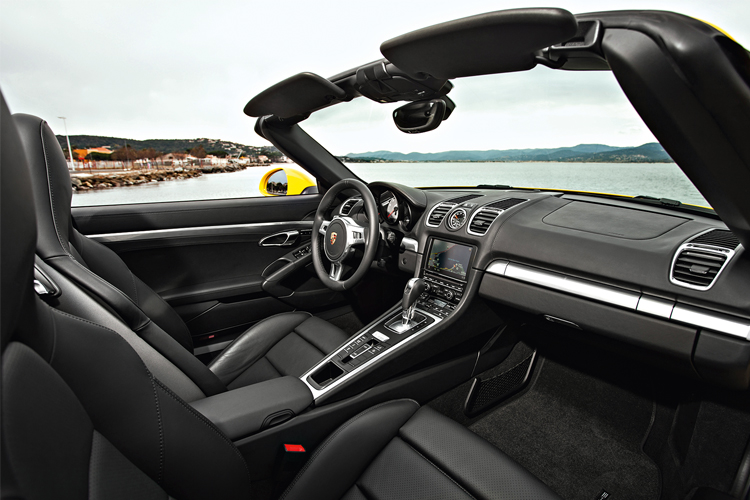 The increased wheelbase has also freed up 25mm more cabin length, so the Boxster is now a very spacious two-seater. It’s also got two deep, well-shaped luggage compartments, one at each end of the car.

Porsche is especially proud of the new hood, which raises and lowers itself in 9 seconds – a significant 3sec improvement. Part of the newfound speed comes from the deletion of the body-coloured panel to conceal the folded hood (and hence the time taken for this panel to open and close) – the top part of the fabric hood is now visible when stowed. Doing away with this lid has also resulted in a useful 12kg weight reduction. Porsche says it could have cut the time further to just 7 seconds, but that would have entailed a more abrupt, rushed folding action.

Thanks to this and other weight-saving measures such as the extensive use of aluminium throughout the body, the new convertible is between 25kg and 35kg lighter than before, model-for-model, despite higher equipment levels. 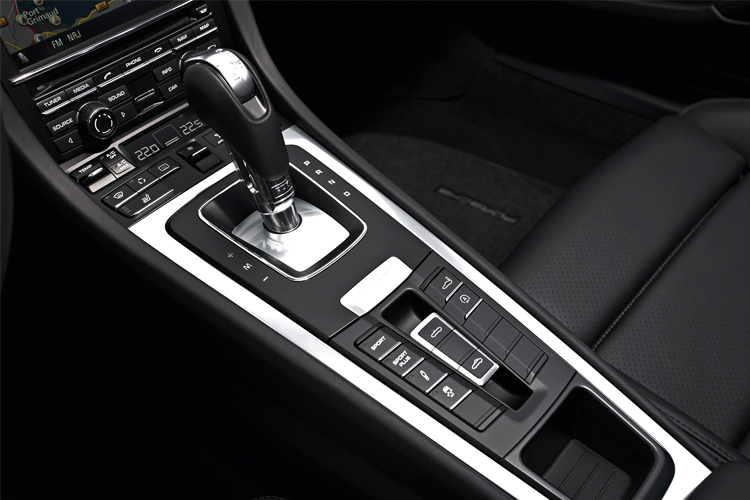 Here is where you play with the Boxster’s roof, spoiler, suspension and drivetrain.

This being a Porsche, headway has been made on the engine front, too. The base motor has been downsized in the name of efficiency and is now a 2.7-litre (previously 2.9-litre) flat-6. Power hasn’t been downsized, though – in fact, it’s gone up by 10bhp to 265bhp, although torque is down 10Nm to 280Nm. The Boxster S retains its 3.4-litre flat-6 (now shared with the base 911, albeit in a different state of tune), with a 5bhp power increase to 315bhp. Torque remains unchanged at 360Nm.

Opt for the Sport Chrono package and, apart from the Sport Plus function that serves up ultra-aggressive shifts from the PDK dual-clutch gearbox, you’ll also get dynamic engine mounts, which are filled with fluid of variable viscosity that allows them to stiffen or soften according to the motoring situation and driving style.

Transmission duties are handled either by a 6-speed manual (fitting the new 7-speed manual from the 911 would have entailed a 20kg weight penalty, so Porsche stuck with the 6-speeder) or the familiar 7-speed dual-clutch PDK. 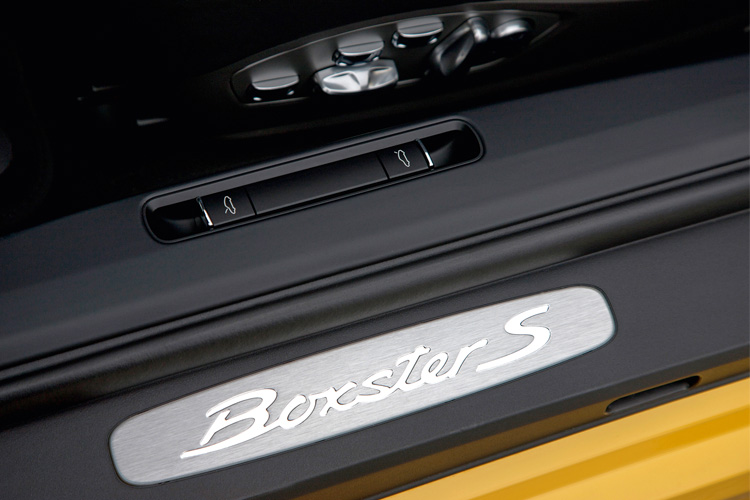 All that dieting and gym work has naturally resulted in beefier performance figures. Zero-to-100km/h acceleration timings have fallen by 0.2 of a second (equipped with PDK, the Boxster now does it in 5.7 seconds and the Boxster S in 5 seconds flat), while top speeds have gone up to 262km/h and 277km/h respectively.

In keeping with the Zuffenhausen zeitgeist, there are a host of fuel-saving measures in place. Apart from the lighter body and downsized engine in the base Boxster, the new roadster also features the now-obligatory automatic stop-start, electric power steering (which consumes no power when the car is heading straight), electrical system recuperation (which charges the battery during braking or coasting to reduce the engine load under acceleration), intelligent thermal management, and a “coasting” function that decouples the drivetrain and lets the car coast when heading downhill or when no acceleration is needed. Total potential fuel savings range from 10 to 15 per cent depending on the model.

The on-paper specs look great, but you know what they say about the proof of the pudding. What’s the new Boxster S like to drive? In a word, wonderful. 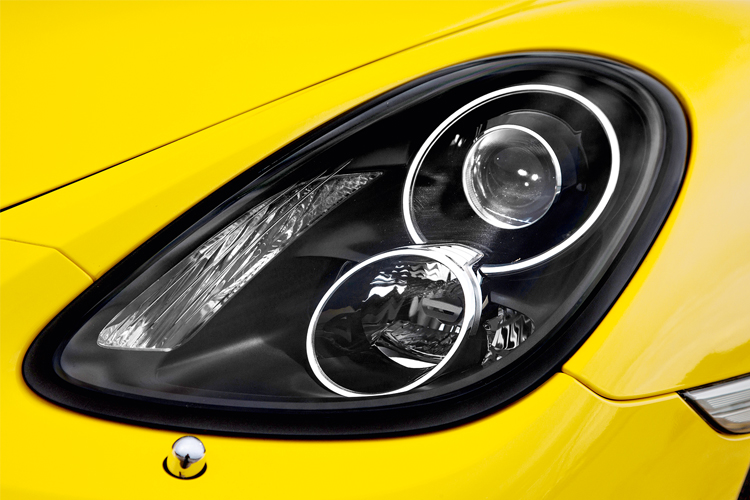 These headlights are said to be inspired by those on the classic 908 racecar, but they’re stylish all the same.

The 3.4-litre boxer 6-cylinder pulls with real conviction from just 1000rpm, and power delivery is utterly linear, the motive force simply building in intensity until the acceleration becomes quite searing as the revs pass 6000rpm. The gearshift (our test car was a Boxster S manual) is very quick and positive, allowing a near-uninterrupted flow of power.

Opt for the sports exhaust, and the powerplant, normally sweet-revving but aurally tame, reveals an entirely new edge to its personality, blaring and rasping under acceleration, and popping and crackling on the overrun. It is utterly exhilarating and worth every cent of the extra cost. 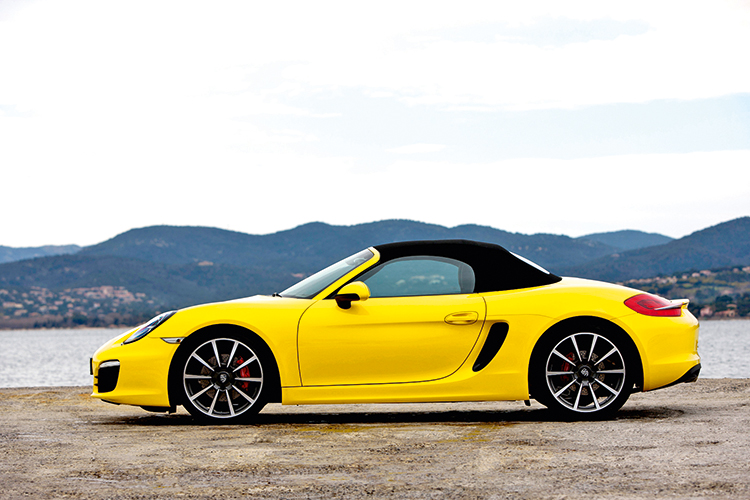 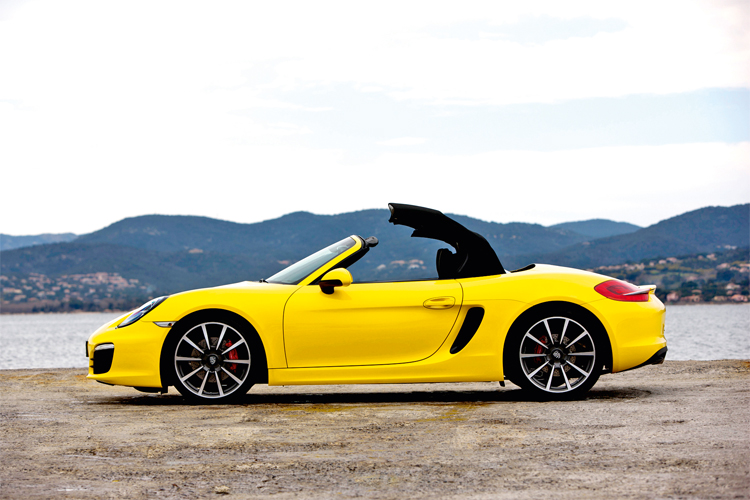 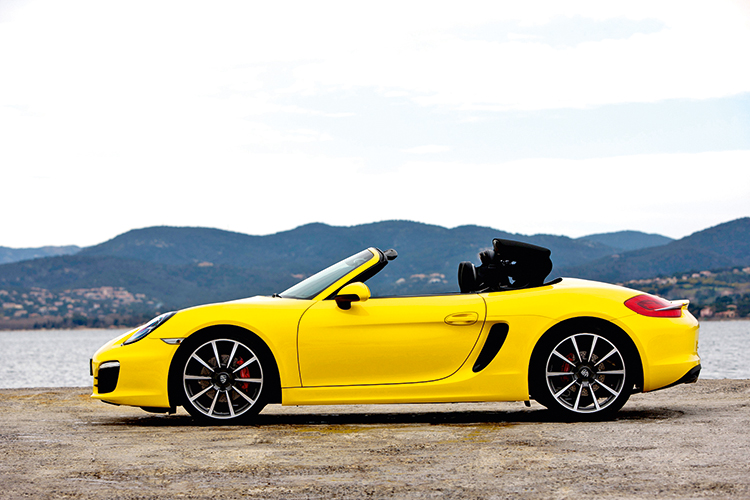 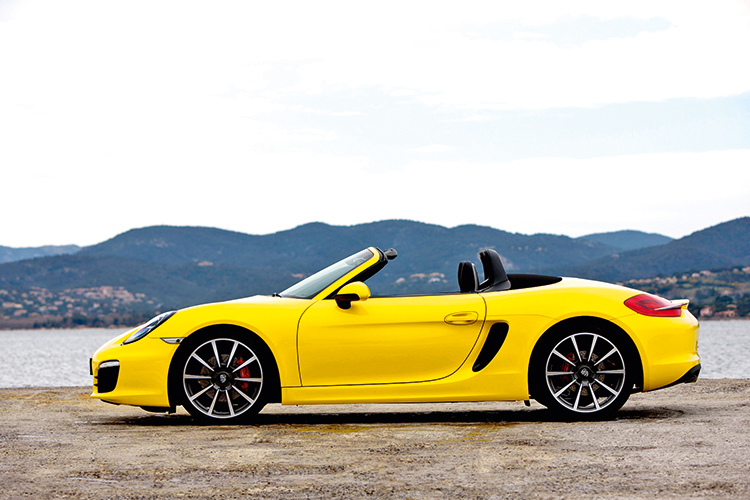 The Porsche Boxster S takes nine seconds flat to go alfresco, and it can be done while driving along at speeds of up to 50km/h.

With the PDK gearbox (which we also sampled), gearchanges are fast and seamless, unless Sport Plus mode is engaged, in which case the shifts become even more instantaneous, every one accompanied by a pronounced, purposeful kick. In this mode, each downchange is accompanied by a throttle blip, which sounds magnificent with that optional sports exhaust.

The steering is meaty, speedy and very, very accurate, allowing you to place the car in corners seemingly to the millimetre. Despite the switch to electric power assistance, the helm remains intimately communicative and full of feel, so that you’re kept constantly informed of the state of grip underfoot. If anything, it’s even more interactive and confidence-boosting than the already excellent electric setup in big brother 911. 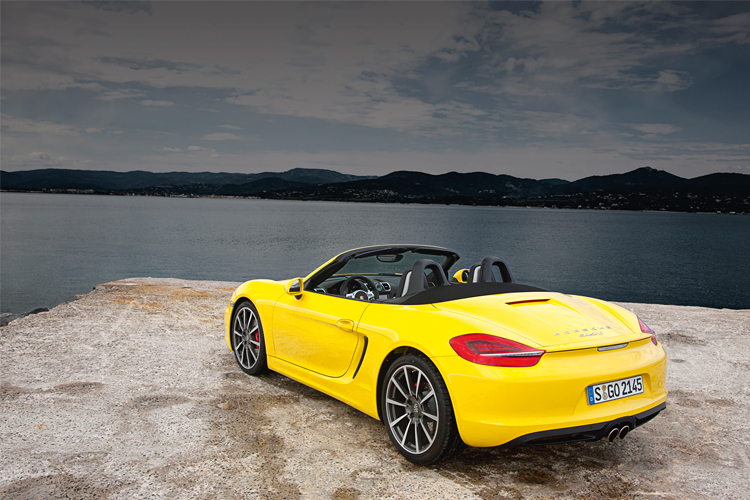 Scalloped flanks of the Porsche Boxster S pay tribute to the Carrera GT supercar, while dual intakes feed the rush of air into the fab flat-6 engine.

Flick that handily sized three-spoke wheel and the turn-in is instantaneous, with front-end grip that is ferocious, more so than in the 911. This allows you to corner at tremendous pace, trusting the nose to remain planted to the tarmac as the tail begins to edge out under power. In this car, more than any other I have ever experienced, such antics aren’t punished by either a snappy rear end or an insipid dose of understeer – instead, you’re rewarded with a lovely, controlled tail slide.

There is less rear traction than with the 911 (whose rear-engined layout makes it peerless in this regard), but this in fact makes the Boxster the more entertaining vehicle, the easier one to corner with a bit of tail-end attitude. The mid-engined Boxster has always been said to exhibit perfect balance, and this new model again proves this to be absolutely true. 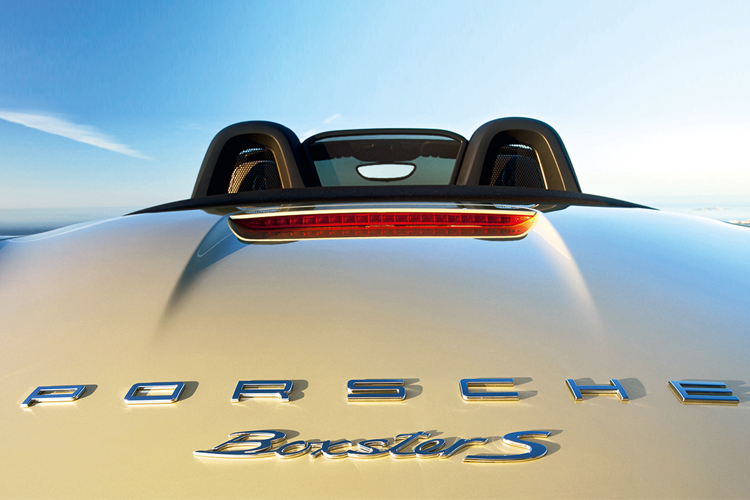 The Porsche Boxster S badge is what other drivers will be seeing.

There is very little roll even in the tightest bends, and you can stiffen the dampers further with a jab of a button if you’re feeling really hardcore. There’s no real need for this, actually, because the normal setting is already beautifully judged – firm enough to quell any stray body movements under serious driving, yet supple enough for the car not to be upset by mid-corner bumps.

The brakes are tireless, bringing the Boxster down from high speed over and over again without fade or complaint. Pedal feel is exemplary, too, making it easy to modulate the braking accurately and with great certainty, the car remaining absolutely stable even under hard braking into a downhill corner.

Porsche claims that its new Boxster S laps the Nurburgring a hugely impressive 12 seconds faster than before. I’ll bet the chap who set that lap had a big grin plastered on his face for all 7 minutes and 58 seconds that it lasted. 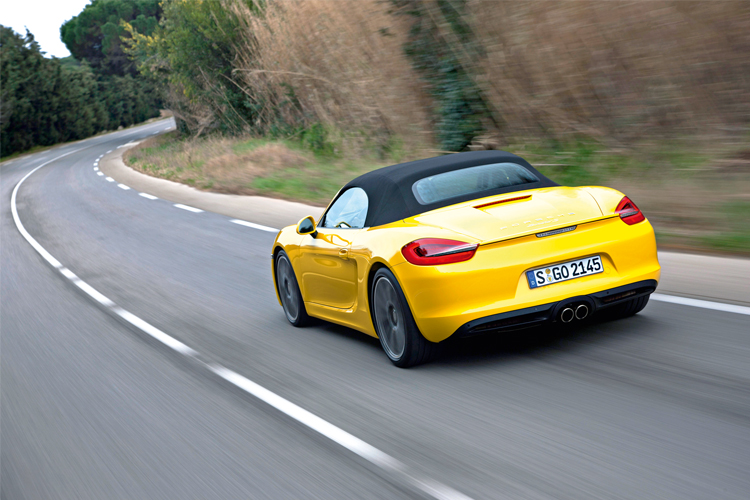 Porsche’s boxer + roadster formula for fun has been honed to perfection.

And when you’re done conquering the B roads, the Boxster will also whisk you home in fuss-free civility. The boxer engine feels long-legged yet instantly punchy whatever the revs, and refinement is first-rate. “Roofless”, the cabin remains bluster-free; with the roof up, it is almost as hushed as many a tin-top coupe, thanks to ample acoustic insulation in the hood, whose fabric is now 3mm thicker than before at 14mm.

Given its cornering ability, the Boxster is unbelievably comfortable. It covers urban roads very ably, rounding off bumps and imperfections so that the ride, while firm, is never harsh or unyielding. It helps that the bodyshell itself feels indomitably rigid (it’s 40 per cent stiffer torsionally than before), so there’s no hint of scuttle shake and not a creak or rattle to be heard.

So complete is the new Boxster, and so inspired is its handling, that truth be told, there is now little reason to shell out the best part of $160k more for a 911 Carrera Cabriolet – unless you really need those token rear seats, or just want that iconic shape. Remarkably, the smallest and cheapest car in Porsche’s current range may also be its best.