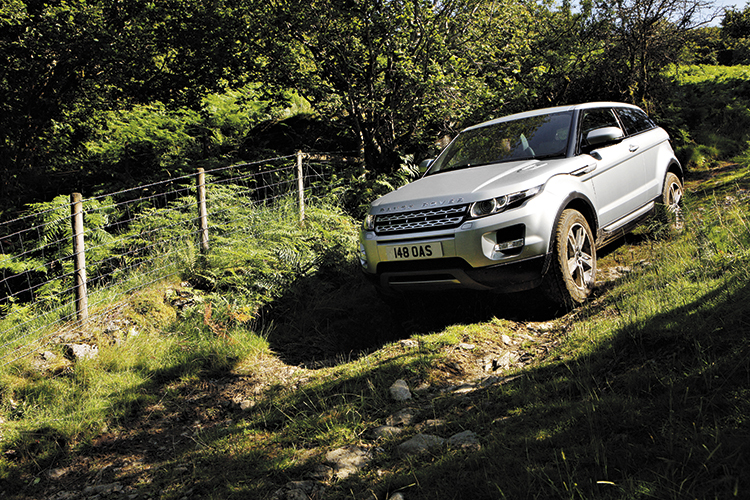 Regal and rugged in equal measure, Range Rover is the undisputed Rolls-Royce of modern SUVs. Rangies (to use the colloquial term) are the ultimate Land Rovers, naturally able to keep a stiff upper lip, with a whiff of upper-class leather, regardless of location and situation.

In the middle of nowhere, somewhere between a rock and a hard place, anywhere interesting, everywhere except civilisation – the Range Rover is ready to rock and roll. The concrete jungle, too, would be a walk in the park for this super-SUV (no rangers required, celebrity footballers preferred).

This uniquely British blend of luxury, utility and off-road ability is now available in a delightfully downsized model called Evoque. The smallest, sleekest, lightest and most aerodynamic Range Rover yet is also relatively economical and clean-running. It is comparatively cheap, too, with the 2-litre five-door costing $100,000 less than the Range Rover Sport 3.0D in Singapore. 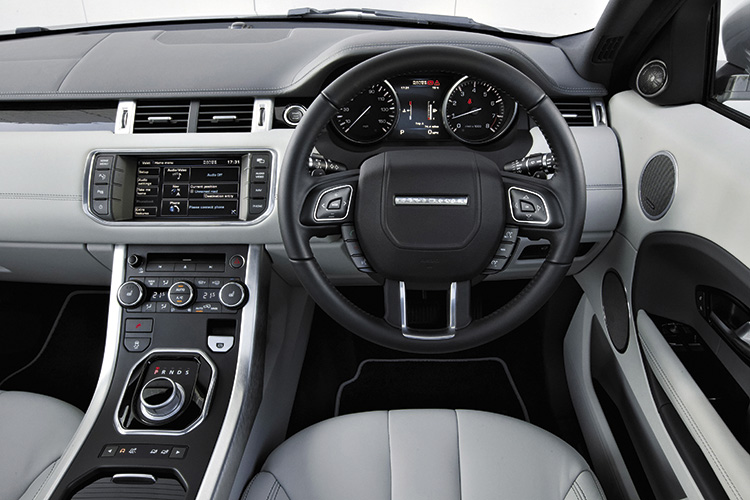 Classy, roomy and beautifully illuminated, right down to the Evoque-shaped puddle lights along the front doors.

Like the RR Sport spawned from the Discovery 4, the Evoque is based on an existing Land Rover platform – that of the Freelander 2 (F2). The two models have the same 2660mm wheelbase and their level of parts sharing is around 20 per cent, but the Evoque’s architecture is otherwise sufficiently different to make it much more than a “Freelander too”.

The floorpan, for instance, sits 27mm lower while providing a bit more ground clearance (215mm versus 210mm) – this was made possible by the Evoque’s tighter packaging of components “underneath”. 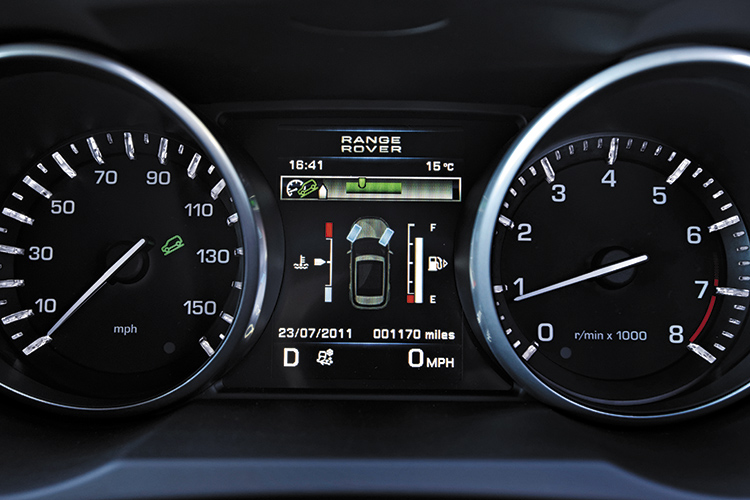 Size-wise, the Evoque is more compact than the F2, but of greater relevance are its proportions. The body is a smidgen broader than the Range Rover Vogue, the fenders look muscular (those in front are made of thermoplastic), the roof is rakish and the rear end is impossibly pert by Rangie standards, while the stance (especially with 20-inch shoes) qualifies the car as a four-square, high hot hatch.

There is even a three-door Evoque (bravely called a coupe by its maker) that is 30mm lower and 10mm shorter than the already swoopy five-door. These could be Land Rover’s first Tonka Toys. 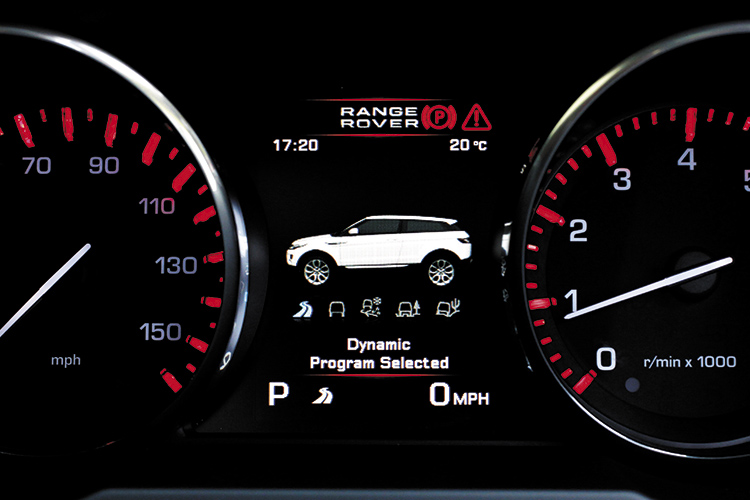 Meters in “dynamic” mode turn red after the suspension and steering have been reconfigured – not instantaneously.

And the Evoque toy shop is well stocked – there are 12 different paint jobs, a choice of three contrasting roofs with optional panoramic glass (one of the largest panes ever installed “atop” an SUV), black or chrome roof rails, and eight alloy wheel designs from regular 17-inch to spectacular 20-inch. 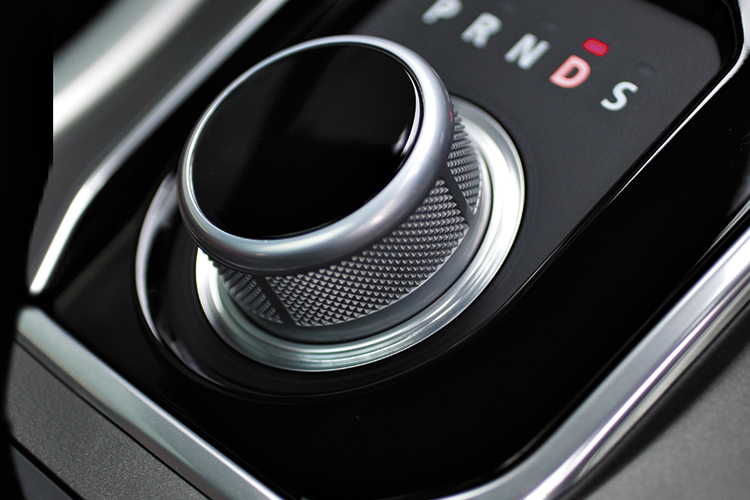 Inside the Evoque, the old-school “English drawing room” cockpit of other Range Rovers has been replaced by a new-age “discotheque”, complete with comfy lounge chairs. The interior appearance and on-board equipment depend on the chosen theme – Pure, Prestige or Dynamic. 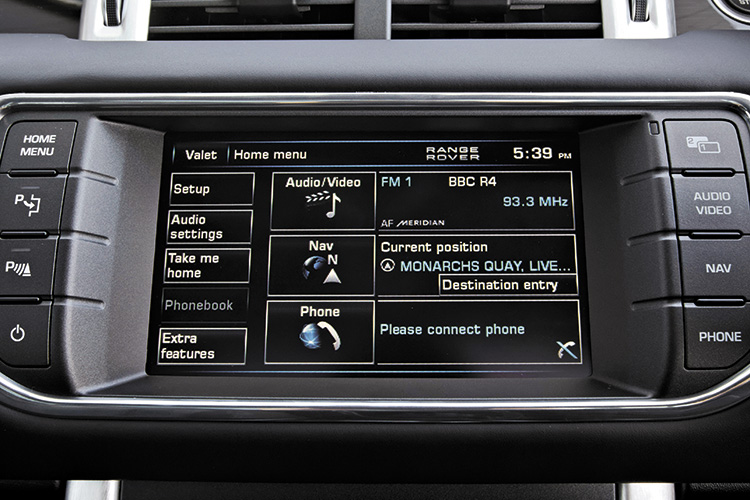 Eight-inch touchscreen is colourful and useful, but some sub-menus can be confusing to the first-time user.

Tick the “Dynamic Plus” box and your Evoque will feature front sports seats (pictured opposite, top right corner) worthy of a Bentley GT.

The ergonomically elevated seating (or Command position in Rangie-speak) is less of a surprise than the ample headroom and legroom for rear passengers, who must, however, rest their feet on an uneven floorboard and its sizeable centre hump, while the driver’s bum has to get a grip on the slightly slippery seat when trekking off road. Oddments storage is great and includes commodious door bins, a spacious glovebox and a “hidden” tray (ringed by ambient light at night) behind the centre console.

In the infotainment department, the Evoque has deployed gizmos from its V8 mothership. The 8-inch high-definition touch-screen, said to be the biggest in the Evoque’s segment, has dual-view capability (a world-first innovation last year by Jaguar Land Rover), which lets the front occupants look at different content simultaneously – for example, the driver can use the navigation system to search for the nearest Indian restaurant while the passenger watches a Bollywood movie. 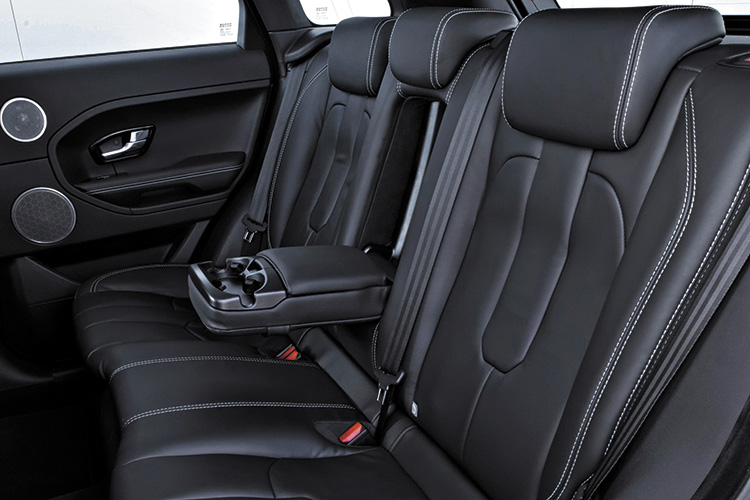 Five-door Evoque is roomier and has a bigger boot, but has less character than its three-door sibling.

Less of an aural pleasure is the turbocharged 2-litre 4-cylinder dubbed Si4, which drives all four wheels. Power is a healthy 240bhp and torque is a hearty 340Nm, but the figures look more thrilling than they “sound”, with the engine tone workmanlike at best. This Evoque is more powerful than the Golf GTI, but it doesn’t “shout” about it from under the clamshell bonnet. 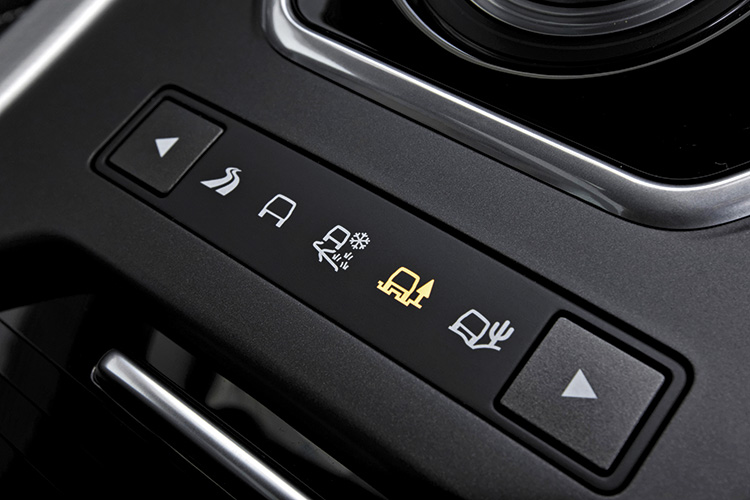 Transmission duties are handled by a 6-speed automatic, which executes effective gearchanges but could carry out DIY downshifts more promptly. The aluminium rotary shifter rises from the “PRNDS” panel when the car is started – this is a neat trick learnt from Jaguar. It would have been even better if the paddle shifters behind the steering wheel were also made of aluminium.

Speaking of which, the cabin’s metal trim contains 95 percent recycled aluminium. Another save-the-planet initiative is the recycled polyester used for the interior headlining and the Pure model’s Dinamica eco-suede fabric. In fact, 16kg of recycled plastic and 21kg of reused cotton, compacted cardboard and natural rubber go into every Evoque.

Planting 235/55 R19 of Continental rubber onto the road is a pleasure in this vehicle. In handling terms, this is the closest thing today to a Land Rover sports car. It steers quickly into corners (number of turns lock-to-lock is less than 2.5) and cooperates fully with the committed driver. 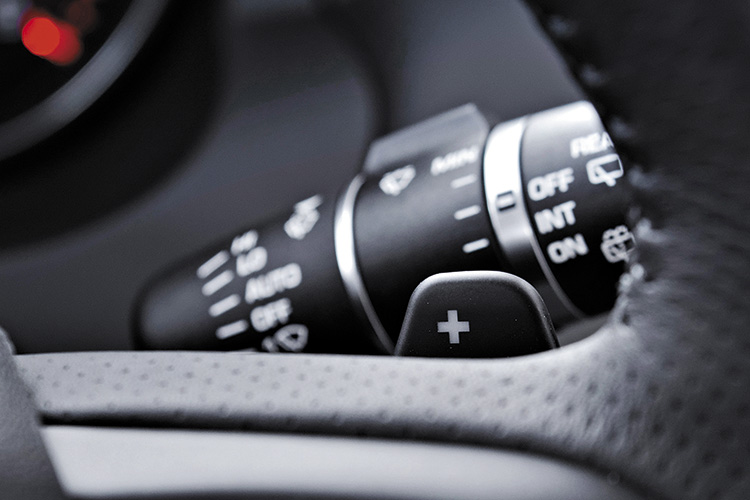 An electrically driven system with speed-sensitive assistance (and automated parallel parking assist if specified), the helm works in a light, linear manner so directional changes, even fast ones, are never an armful at the wheel.

Compared to the Range Rover Sport, the Evoque feels half as heavy (one tonne less, to be exact) and twice as wieldy. The way it dives into corners and drives out of them makes the Evoque a speedboat vis-a-vis the battleship that is the supercharged V8 Rangie. It stops very well, too.

Helping the Evoque handle wavy roads is third-generation MagneRide adaptive damping (standard on Dynamic spec but otherwise a cost option). Its computer-controlled dampers are similar to those used in the Audi TT and Ferrari 599, but with more rebound built in to make the ride more supple when “soft”. Sensors monitor vehicle movements and driving inputs 1000 times per second and then decide the appropriate damping force, instantly. 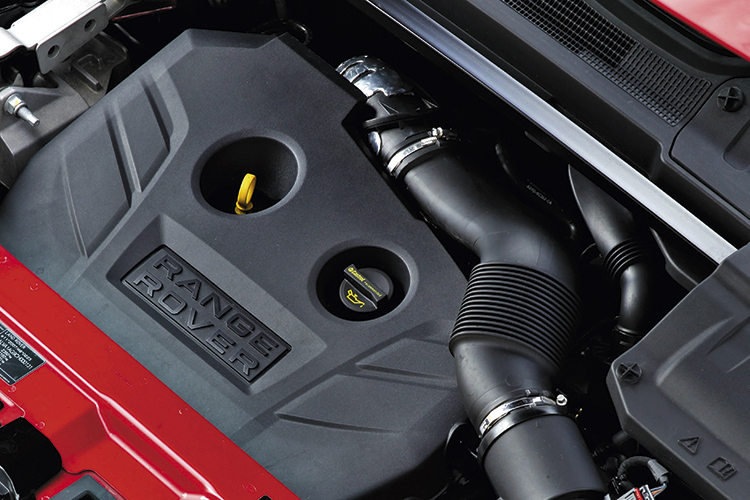 With 240bhp and 340Nm, this smooth turbo 2-litre engine pulls eagerly but could sound more exciting.

By activating the “winding road” dynamic mode in the Terrain Response system (more of which later), the driver can prompt the electronics to induce stiffer suspension and reduce steering assistance at speed. This instruction also changes the backlighting for the instrument meters from white to red, but the little light show looks quite chintzy.

Thankfully not as pretentious is the effect on the steering, which “turns” a touch heavier and more positive when spearing through a series of bends. The suspension is also tied down more aggressively, so much so that the chassis sometimes skips over ragged tarmac.

The marginal benefit to cornering velocity is not worth the trade-off in riding comfort, which is superb when not in the busy “winding road” mode. Even on 55-profile 19-inch tyres, the ride is pliant enough to absorb all but the worst bumps in the asphalt, albeit with some tyre patter thrown in the mix. 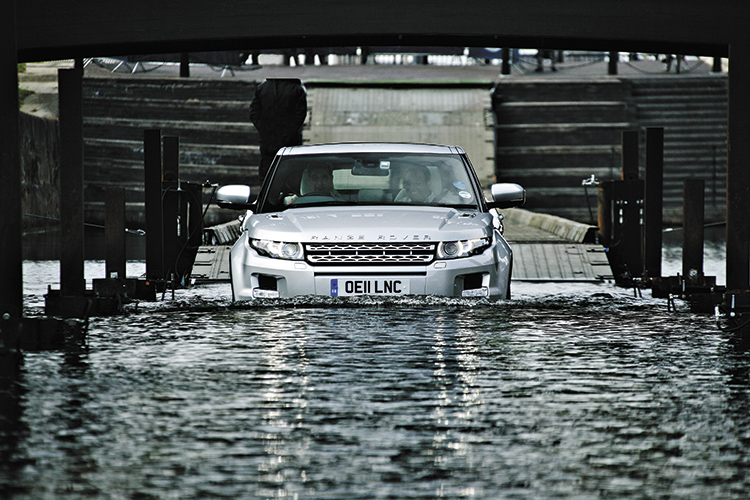 Even more impressive than the Evoque’s performance on paved tarmac is how well it performs the “ranging” and “roving” roles. Yes, this trendy Rangie is happy to get dirty and scratchy off the beaten track, which was proven when we took the car through the Welsh countryside.

Some of it looked challenging by the “clean” standards of this city dweller, but this baby Range Rover didn’t miss a beat as it negotiated picturesque rural places with names straight out of some fantasy epic – Brynteg, Plas Newydd, Snowdonia and Llanberis Pass. 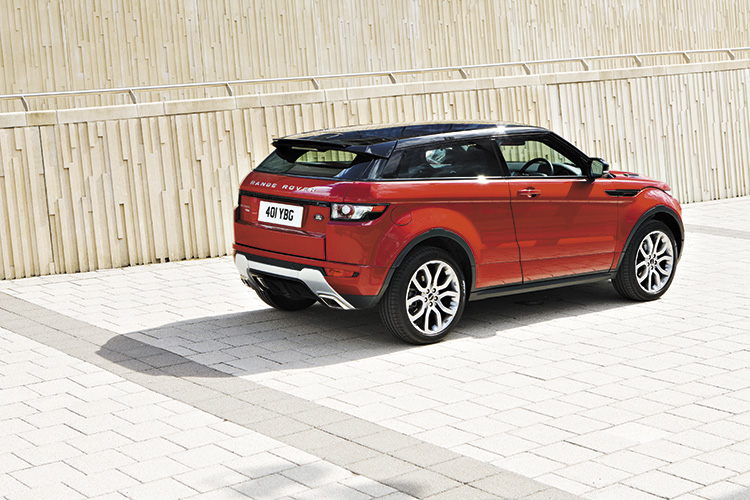 No other 2-litre SUV available today is as striking as the hot new baby Rangie.

The Evoque’s “tread lightly” weapon of choice in off-road conditions is Terrain Response, Land Rover’s omni-capable 4×4 technology that makes molehills out of mountains. Although the control panel is a push-button affair less shiok to use than the chunky knob in other Range Rover models, it does the job. And what a taskmaster the device is.

Simply activate the relevant Terrain Response mode and even the slickest city slicker will survive the wilderness, without breaking a sweat (or an axle). Just press and play, no need to pray for divine guidance before venturing out. Thus equipped, this machine is unlikely to leave you high and dry in wet highlands, so that rescue team on standby with Defenders would be an unnecessary expense. Every off-roading exercise should be straightforward and safe in this Rangie. 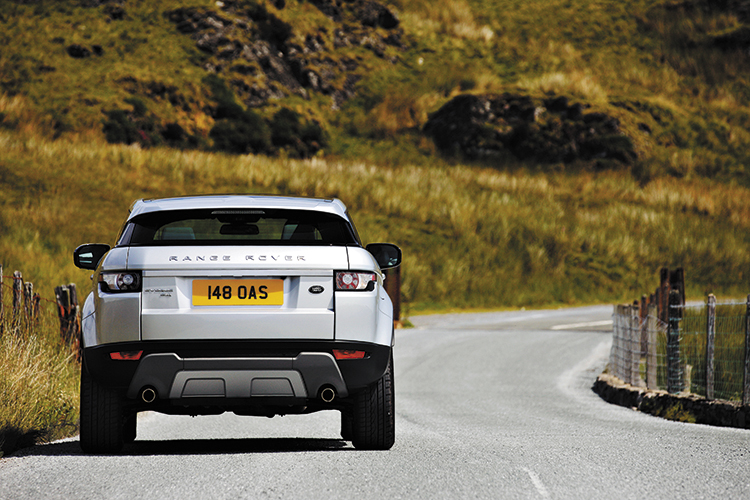 All the Timberland-clad adventurer needs to do is respond correctly to the terrain by choosing one of the four modes, each signified by a foolproof icon – General Driving, Grass/Gravel/Snow, Mud/Ruts and Sand. Another terrific off-road tool is Hill Descent Control, which helps the Evoque negotiate steep slopes easily, with the driver using the cruise control buttons to make the steady journey downwards a little slower or faster.

The car can even wade across a body of water half a metre deep (foreign river or local flood). That should cover most of the beautiful ulu areas we read about in National Geographic magazine. 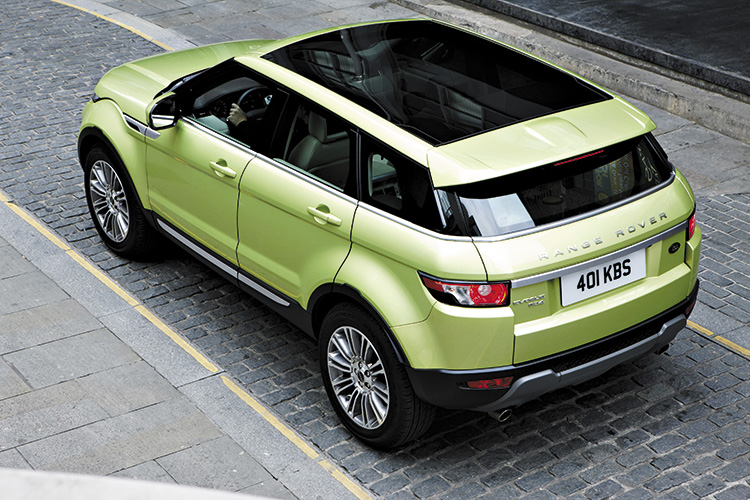 An all-round camera system lets the explorer better see where his mechanical mountain goat is heading. The five digital cameras provide a nearly 360-degree view of the Evoque’s immediate vicinity, which is helpful when manoeuvring the car through cramped woods and on narrow trails.

Of course, those digicam lenses are more likely to be trained on streetside kerbs and carpark walls. The concrete jungle is the Evoque’s natural playground, dotted with a forest of lamp posts and inhabited by animals that drink gasoline.

Protecting the Range Rover from predators is its strong acceleration (to get out of trouble), good vantage point (to spot potential trouble in time) and Blind Spot Monitoring option. Even its traffic-stopping looks can work to its advantage, by possibly opening escape routes through downtown congestion. 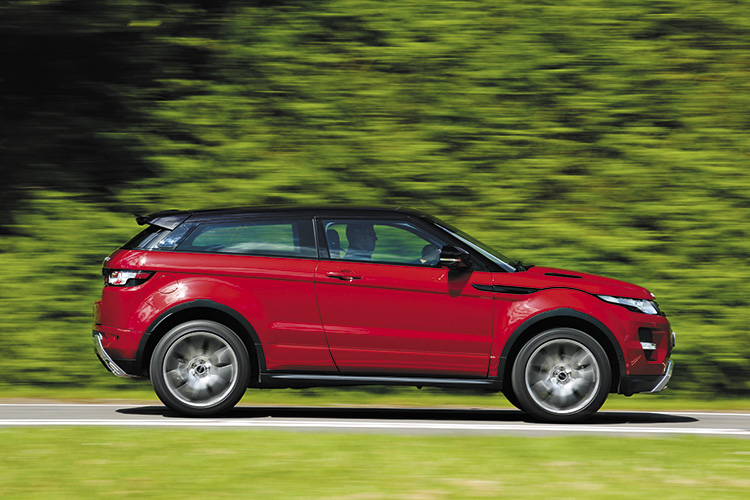 Just as the Golf GTI is the most complete car in its class, the Evoque is all the sports and utility you need in a small sports utility vehicle. Anything more would be surplus to requirements, and any rival of similar price is probably less thorough. Factor in the dramatic design, premium feel and prestigious Range Rover branding, and the Evoque’s completeness is absolute.