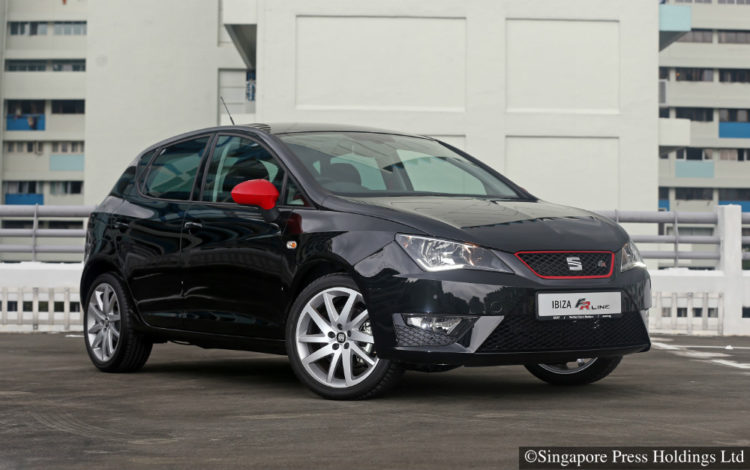 Like most foodies, I love laksa, especially the Katong variety.

I cook up excuses like having to test drive cars so I can drive from the Toa Payoh newsroom to Katong for the laksa. The food is a bigger draw than the cars sometimes.

But I am lost in the stories of rivalry behind Katong Laksa. I know some of the rival laksa joints in Katong are related. But exactly how is fuzzy to me.

The Seat Ibiza reminds me of the Katong laksa war.

The Spanish supermini is related to the Volkswagen Polo and Audi A1. But most drivers in Singapore will not be able to spell out the similarities and differences, especially when Seat has not been seen on Singapore roads for some time.

The Ibiza tested here is the fourth-generation model of a line of superminis that goes back to 1984. It was launched in 2008 and facelifted in 2012, but it made its local debut only last year after Seat appointed a new dealer, Vertex Euro Motors.

Seat is part of the Volkswagen Group and its cars are seen as cheaper alternatives to VW and Audi cars. The Ibiza is built on the same platform as the current generation of VW Polo and Audi A1.

The Ibiza is also powered by a turbocharged 1-litre 3-cylinder engine that is found in the Audi A1 and A3, to slightly different outputs. A version of the engine is already in the Golf in overseas markets.

The powerplant is lively and eager. Exceeding the performance of a naturally aspirated 1.6-litre engine, it is like a lightweight boxer fighting in the middleweight class.

Paired with a familiar 7-speed dual-clutch gearbox, the Ibiza nails the 0-to-100km/h sprint in 9.3 seconds.

This makes it the sprint champ among cars powered by one-litre engines in Singapore. It is quicker than the Audi A3 sedan (9.9 seconds), Ford Fiesta (10.8 seconds) and Audi A1 Sportback (11.1 seconds). 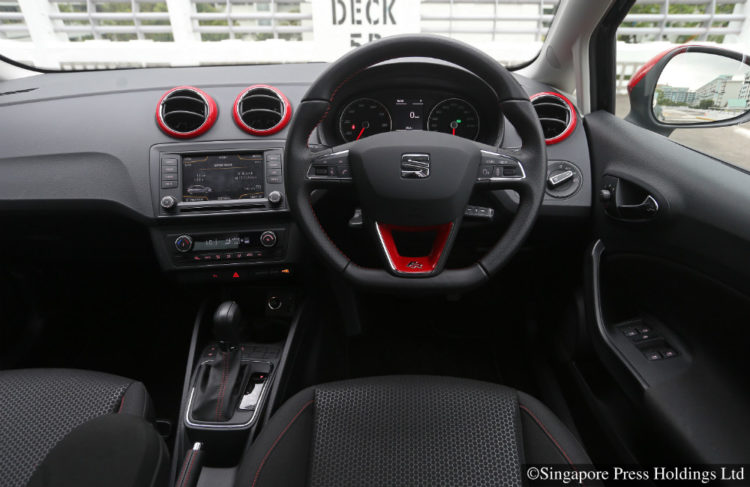 I thought I got into a VW when I slipped into the Ibiza. The instrument cluster, centre console and even the flat-bottom steering wheel are all familiar VW fare.

On the move, flicking the gearshift backwards allows you to toggle between the Sport and Drive modes – also VW and Audi features.

While the cabin is clinically functional, it stops short of becoming drab, thanks to the red seat belts, red stitching on the steering wheel and red trim around the air-con vents and centre-console.

The test car is the best equipped version in the local Ibiza line-up. It has headlights that swivel with steering inputs and a 6.5-inch iPhone/Android-compatible infotainment touchscreen. Rear legroom and boot size are what is expected of superminis – snug.

On a leisurely 220km test-drive over a weekend, its fuel consumption was about 14.7km per litre, higher than the manufacturer’s claim of 22.2km per litre.

The Ibiza is not without minor blemishes. The only space to hide things from prying eyes is a tiny compartment inside the arm-rest of the driver’s seat. It looks like it can hold only about five slices of bread.

The arm-rest, when flipped down, also gets in the way of pulling and releasing the parking brake lever.

These quirks are minor compared to a bigger obstacle – the lack of brand awareness of the car. If drivers can look beyond the brand, the Ibiza is good value for money.

The current model is about to end its production run and the new fifth-generation car could come as early as the end of this year.

Fashionistas will say “wait and buy the latest model”, but those seeking value will buy the car now. There are perks to buying a car just before it runs out – all its technical glitches would likely have been ironed out and dealers usually load cars with equipment to clear stock.

This adds to the appeal of the Ibiza as an alternative to the Polo, A1 and Fiesta. And a rather tasty one too – like Katong laksa.