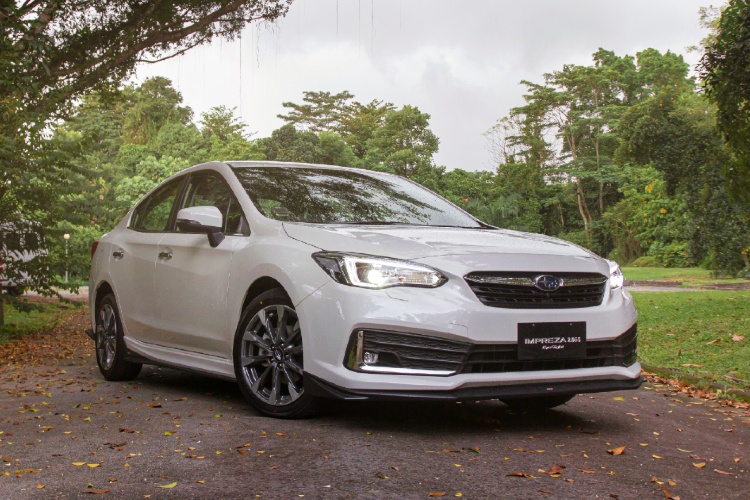 Hearing somebody mention “Subaru Impreza” used to conjure up images of blue rally cars tearing up a mountain road.

You can imagine mud and gravel showering the eager spectators lining the side of the road.

Noises, such as the whine of a turbo and machine gun-like exhausts spitting flames would punctuate the air.

Well, you can still buy a fire-breathing 296hp Subaru WRX STI today. But what about the regular Subaru Impreza? 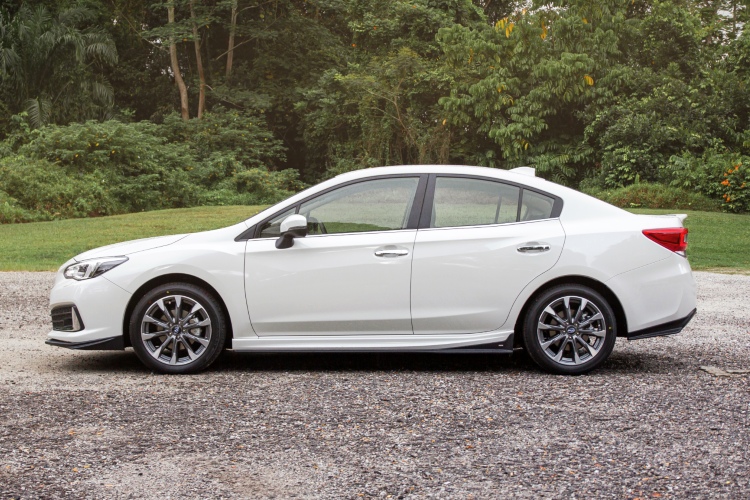 Yes, the Subaru Impreza is still part of the Japanese carmaker’s lineup. But the thought of it no longer sparks such scenarios.

Instead of sportiness, what comes to mind are adjectives such as “quiet” and “refined”.

The Impreza is all grown up now. The once boisterous and hyperactive teenager has become a responsible adult. 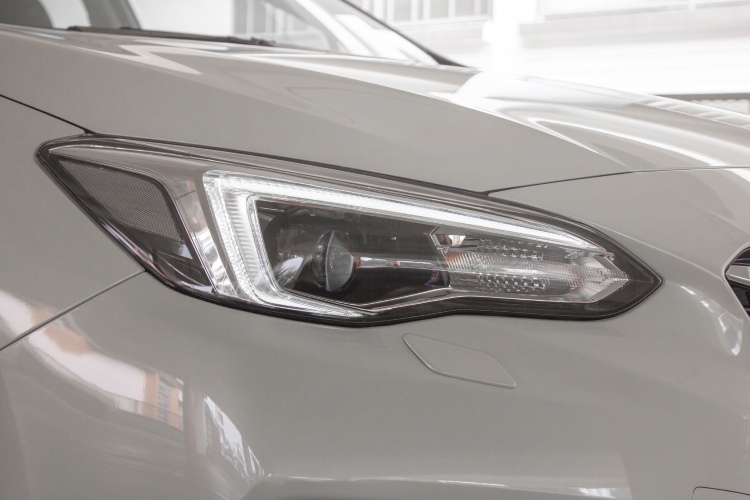 The Subaru Impreza is not the first car one imagines when asked to name a good-looking car. Like its character now, the design language is also subdued.

Minor changes have been made to the car’s styling. The trim on the grille, for instance, is now chrome instead of silver. LED headlights are now standard, and there’s a new front bumper and fog lights, too. 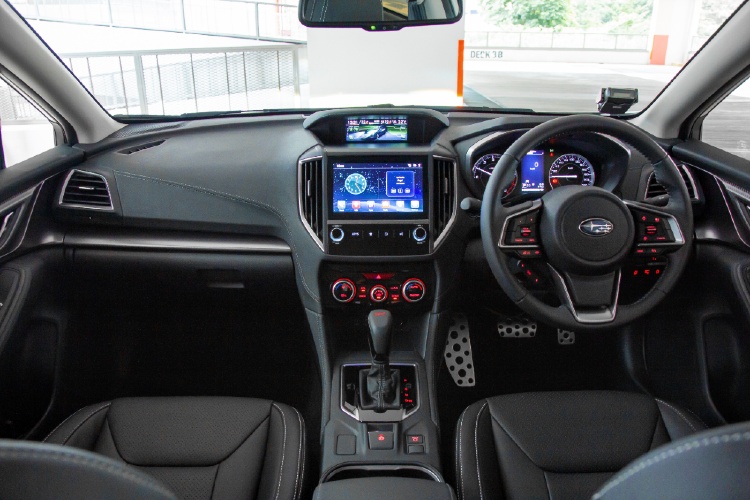 Aluminium pedals, a grippy steering wheel and low seating position give the driver a sporty feeling.

The exterior may not have been sporty, but behind the wheel, there are cues to the Subaru Impreza’s rally heritage.

Getting into the Impreza reveals a driving position that’s relatively low. There’s a pair of aluminium pedals, and the three-spoke steering wheel offers nicely sized thumbrests and a positive grip.

Key improvements include a Front View Monitor for when you need to park head-in, and a new infotainment system with Apple CarPlay and Android Auto.

There’s also a very useful Rear Seat Reminder that “remembers” that the rear door was opened after the car was unlocked.

After you park and switch off the engine, a message appears on the LCD display on the instrument cluster, reminding you to check the backseat. 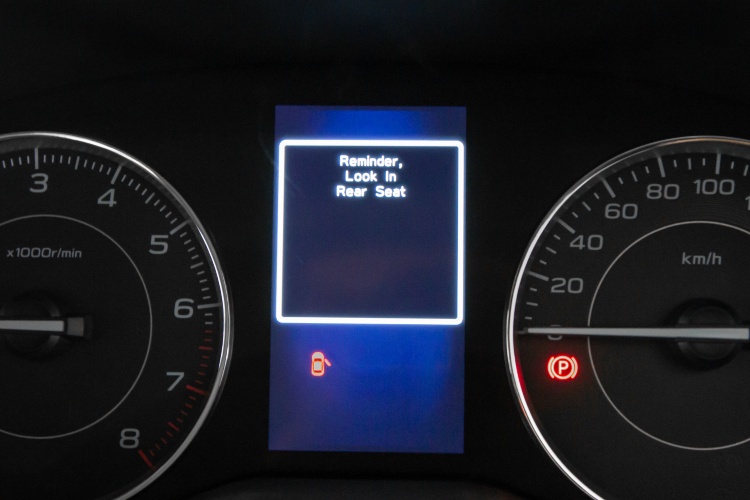 I found this useful as I’ve sometimes left my backpack or a bag of food in the car. Of course, I would only realise this upon reaching my void deck, which is two blocks away from the multi-storey carpark.

What hasn’t been enhanced, though, is the control interface. Navigating through the various menus shown in the LCD between the gauges is unintuitive.

Instead of being able to adjust the various parameters via the big touchscreen, your interface is a trio of buttons below the steering wheel.

Once you’ve fiddled with them and gotten your preferred settings, you will probably never want to explore the menu again. 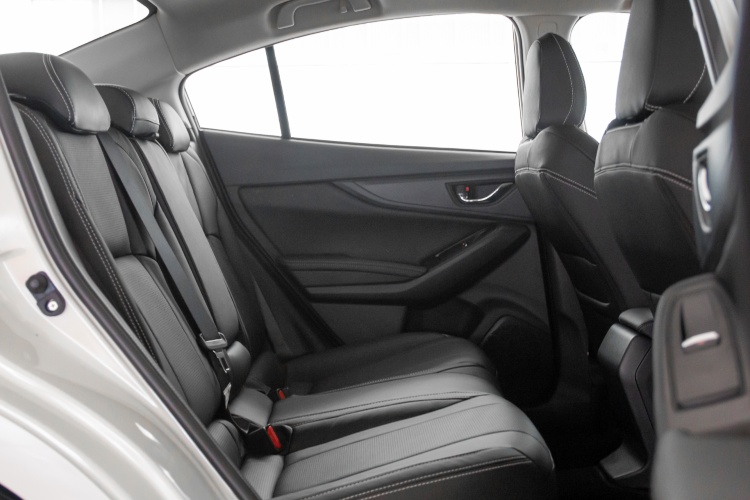 Backseat is relatively spacious, but could use rear air-con vents.

More compelling than the menu interface is the how the Subaru Impreza drives.

Silence. That’s what envelops you after you start the engine.

Because the flat-4 motor is inherently smooth, there are no vibrations to speak of. This powerplant idles quietly – there are no burbles or rumbles.

But that’s not a bad thing. The Subaru Impreza’s naturally aspirated 2-litre flat-4 has buttery smooth and linear power delivery, with a faint rorty note past the 4000rpm mark.

It delivers 154hp and a useful 196Nm. But you’ll need to rev the motor to access these figures, which arrive at 6000rpm and 4000rpm respectively. The century sprint is accomplished in a decent 9.8 seconds. 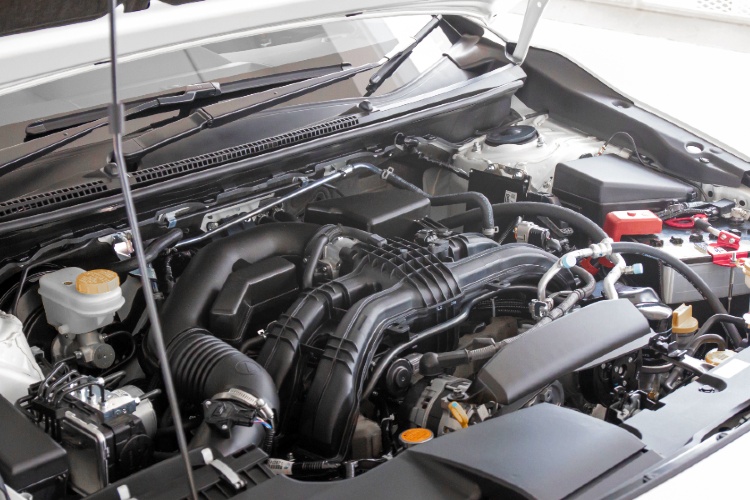 154hp and 196Nm are decent figures. Too bad they have to travel to the wheels via a CVT.

Speaking of linear, the Lineartronic CVT is the fly in the drivetrain ointment.

If the driver is progressive and light-footed, the transmission remains creamy and unobtrusive. But if he or she decides to wring the car’s neck, the CVT will complain – audibly.

And the resulting “clutch-slip” effect is also palpable. The only way to defeat this is to utilise the car’s manual override function, which offers “seven” forward ratios.

To be fair, driving the Subaru Impreza in manual mode feels a lot better than leaving the gearbox in “D”. Just don’t expect any throttle blips when you pull on the left paddle to downshift.

The latest Impreza now also has SI-DRIVE, which offers two selectable modes: Intelligent and Sport. The former is for everyday use, while the latter enhances the drivetrain’s response. 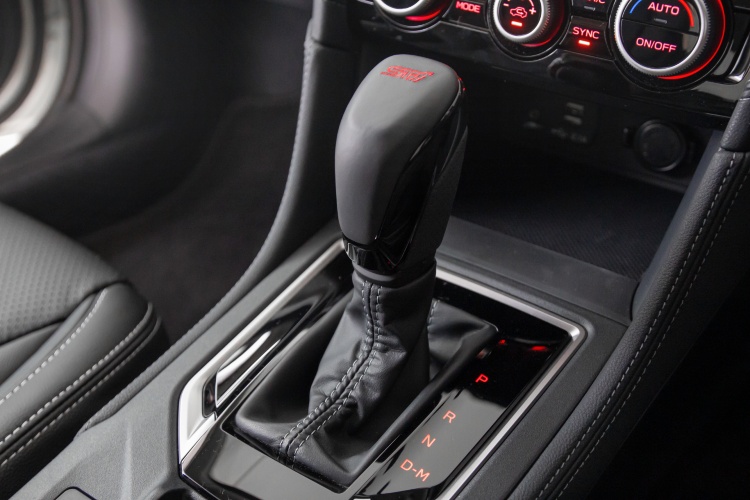 At this point, you’re probably thinking that the Subaru Impreza isn’t fun to drive.

Ahh, but here’s where the engineers had a bit of fun. The car’s suspension setup – MacPherson struts in front and double wishbones in the rear – endow the Impreza with impressive handling (no pun intended).

Turn-ins are positive, with the nose providing more feel than expected. The car is always poised, thanks to the well-tuned dampers. Together with the stiff chassis, unnecessary body movements are eliminated.

Most cars in this segment tend to bounce too much when going over undulations. Not the Impreza. The dampers’ compression and rebound settings are well judged.

So, it can soak up bumps without feeling too firm. And once you’re past them, the Impreza does not feel like it’s getting tossed around. 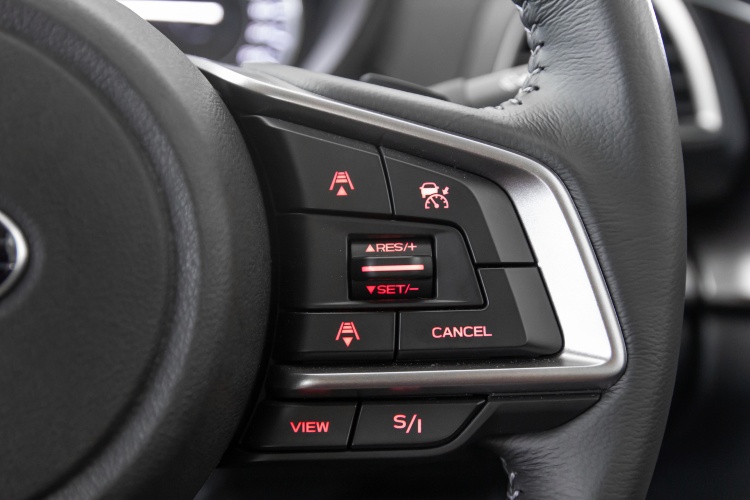 Add all-wheel-drive to the equation and you begin to see why Subaru’s formula works so well.

The latter half of my drive took place during a torrential downpour. Biblical, really. Visibility was poor and there was ponding everywhere.

Throughout those two hours, the Subaru Impreza remained surefooted. While other cars had to be driven more gingerly, I could put down the power without any wheelspin.

Mind you, that’s despite the test vehicle being shod with touring tyres. 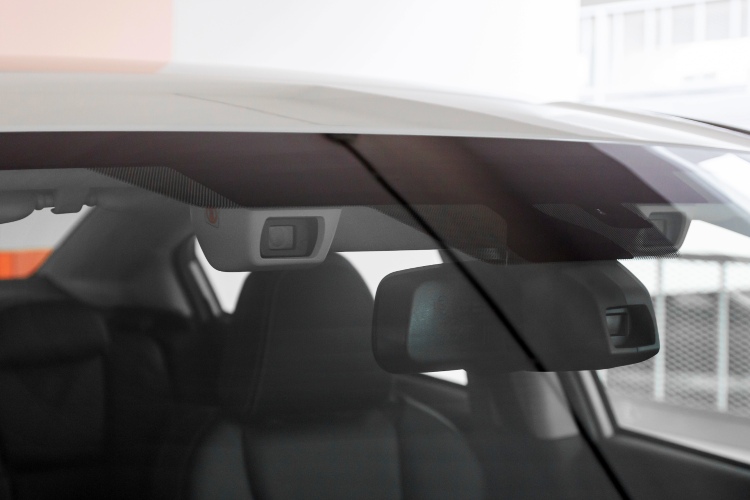 One of the key layers of security on the Subaru Impreza is the EyeSight system. It’s comprised of two stereo cameras (hence its name) that monitor the road ahead by detecting other road users, such as vehicles, cyclists and pedestrians

I found the ACC’s operation to be seamless. The system slowed the Impreza down and sped it up again without jerkiness or hesitation.

Pre-Collision braking is also useful – especially for drivers who tend to get distracted.

That said, EyeSight is constrained by visibility conditions. If you can’t see because the rain is too heavy, EyeSight’s vision won’t be too good either.

The system must be treated as a secondary safety layer. It can complement, but not replace a skilled and attentive driver. 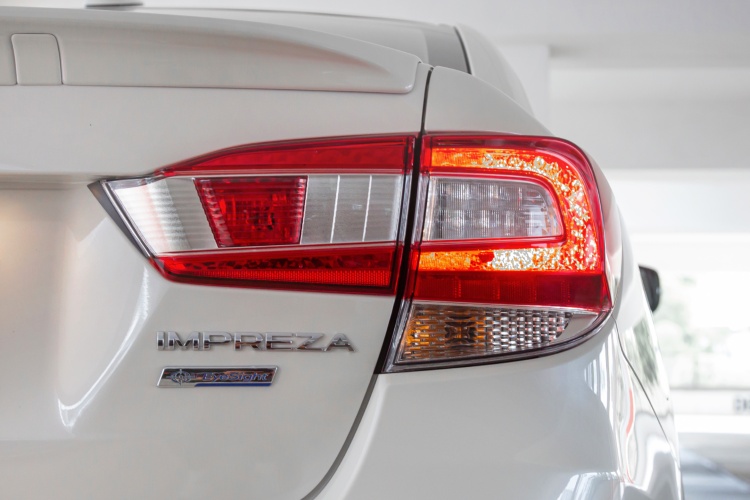 The Subaru Impreza has a lot going for it. It’s refined, secure and relatively practical. Handling-wise, it keeps a tight control on body movements and delivers precise turn-ins. The ride quality is good, too.

These points are enough to make one (begrudgingly) forgive the CVT and high fuel consumption. I averaged 8.3km per litre during my drive. To me, it’s not that bad, considering the all-wheel-drive.

The car is capable and reasonably priced. So, why are there so few of them on the road?

I get the feeling that while talented, it would rather fewer drivers knew about its abilities.

That means the Subaru Impreza doesn’t just have a quiet character, but a shy one, too. 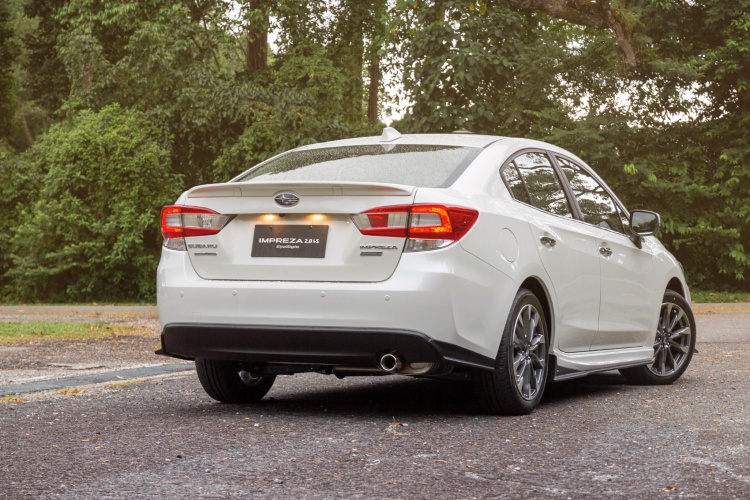