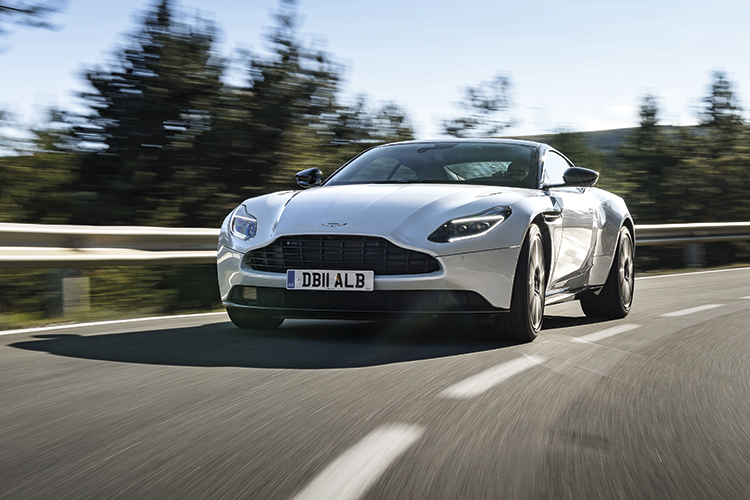 Now, the carmaker has launched the DB11 V8, the “entry-level” model in the DB11 lineup.

While the 5.2-litre V12 in the first DB11 is an Aston Martin engine, the 4-litre V8 in this model, along with the whole neural network that runs it and the electronics, is from Mercedes-Benz’s AMG division. It is the key piece in the technical partnership between Aston Martin and Daimler, the parent company of Mercedes-Benz.

If you like the breakthrough styling of the new DB11, the good news is that there are only subtle differences between the V8 and V12 models. 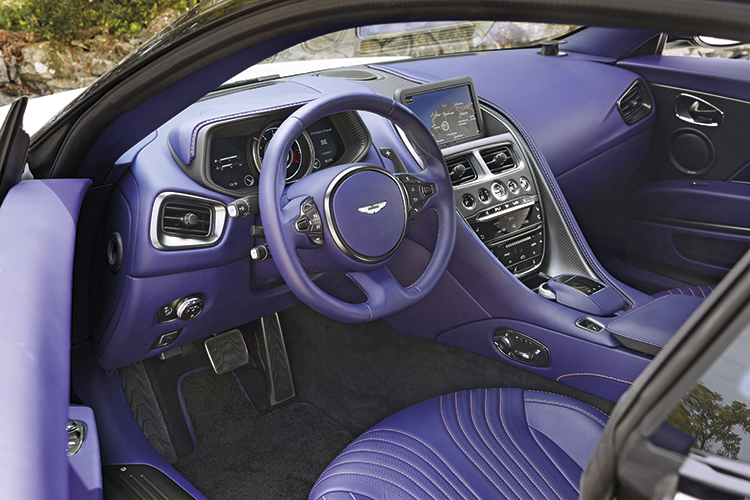 For instance, the wheels have the same design, but the ones on the V8 have a unique alloy finish. A closer look reveals darkened headlamp bezels and just a pair of bonnet vents, instead of the quartet found on the V12.

Inside, both V8 and V12 models have the same level of standard equipment. Buyers are also offered the same extensive choice of colour and trim options. Features such as the 12-inch digital instrument cluster and the centrally placed 8-inch infotainment screen are identical, too.

There are some noticeable differences, though. The V8 has de-chromed knobs for the air-con vents, and many of the bezels or surrounds have been toned down to reduce the bling. Even the steering-wheel controls come in sombre black, as opposed to the anodised metal-like finish in the V12.

Buyers of the V8 model, however, can still personalise their DB11 using the same Option Packs and Designer Specification packages offered by Aston Martin. 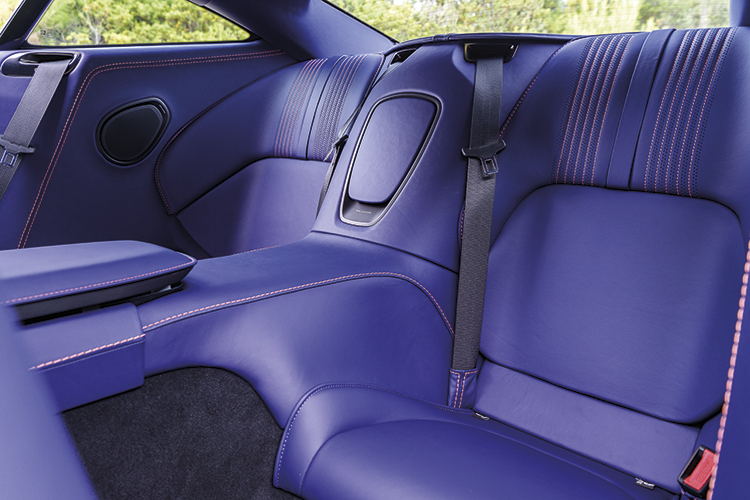 The V8 from Mercedes-AMG uses the “hot V” configuration, which means that the two turbos are located within the “V” of the two banks of cylinders.

In the DB11, the V8 motor produces 510hp, similar to the Mercedes-AMG GT S, but delivers 675Nm, or 25Nm more torque. Bespoke ECU maps instruct the engine to develop power at lower rpms to give the DB11 more of a grand tourer’s character.

Aston Martin’s extensive exhaust tuning has also completely changed how the motor sounds. One would not recognise it as an AMG unit, because the rather bassy roar has been replaced by a more pleasant tenor soundtrack, though it doesn’t sound as intense as the naturally aspirated V8 in the V8 Vantage S.

That said, the turbocharged V8’s advantages are that it is smaller and 115kg lighter than the V12 unit. The DB11’s front/rear weight distribution ratio has also changed from 51:49 with the V12 to 49:51 with the V8.

This difference prompted changes to the suspension tuning. The spring rates are reduced in the front, but the damping is a little firmer, and the rear suspension is tuned to resist yaw better, so as to give the DB11 V8 a sportier flavour without affecting ride comfort. 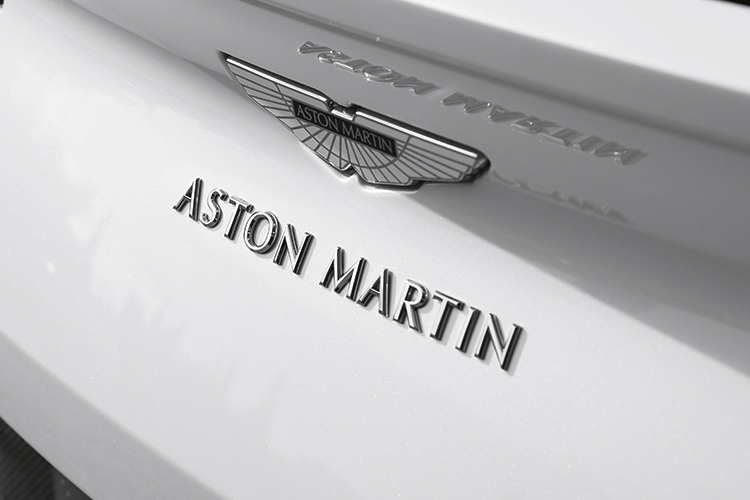 For the gearbox, Aston Martin utilised ZF’s 8-speed automatic instead of Mercedes’ 7-speed dual-clutch. With the latest firmware, the former’s gearchanges are nearly as quick as the latter’s, and they have a creamy smoothness that befits the Aston Martin brand.

The DB11’s chassis is the best that Aston Martin has ever delivered to date, and a lot of this is due to the skill and experience of ex-Lotus suspension engineer, Matt Becker. 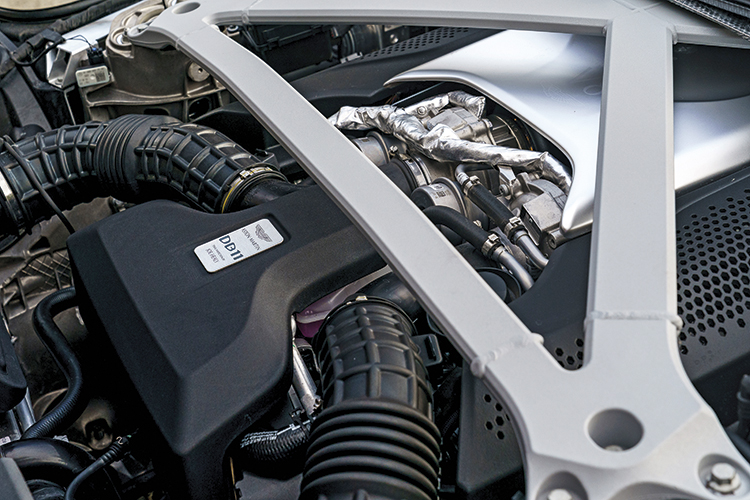 Thanks to exhaust tuning, the turbocharged 4-litre V8 no longer sounds like an AMG unit, with the bassy roar replaced by a tenor soundtrack.

With a lighter front end, the V8 DB11 is more agile than its V12 sibling, and its nose is more eager to change direction. The rearward weight bias enhances stability under hard braking, as it reduces weight transfer to the front.

Even in the default GT setting for the dampers, there is far more body control than one would expect, despite the suppleness of the suspension.

Switching to Sport seems unnecessary, although the firmer setting controls the body better, albeit with slightly more jiggling over uneven road surfaces. Sport Plus further reduces body movements and adds sharpness to the steering response. 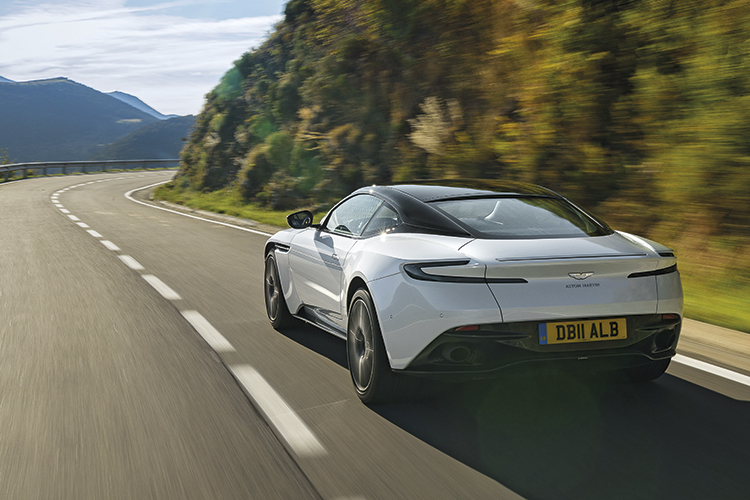 The Aston Martin DB11 V12’s power is more sustained at higher speeds, but the way the DB11 V8 overtakes at lower speeds is equally staggering.

However, for most of my drive, I leave the dampers in GT mode as it is a perfect complement to the character of the V8. The GT setting for the drivetrain is also the most ideal for city driving and fast roads, but if you want a racecar-like experience, select Sport Plus. In this mode, the gearbox always chooses the lowest gears possible and automatically downshifts as you brake for corners.

The DB11 V8 is in its element at high cruising speeds. The steering is so utterly accurate that you’ll be confident of placing the car dead centre in a lane, even when you’re doing 200km/h on long and curvy highway stretches.

Lighter and even more agile than the V12 DB11, and just as quick, the V8-powered DB11 further blurs the line between grand tourer and sports car.

Check out the Aston Martin DB11