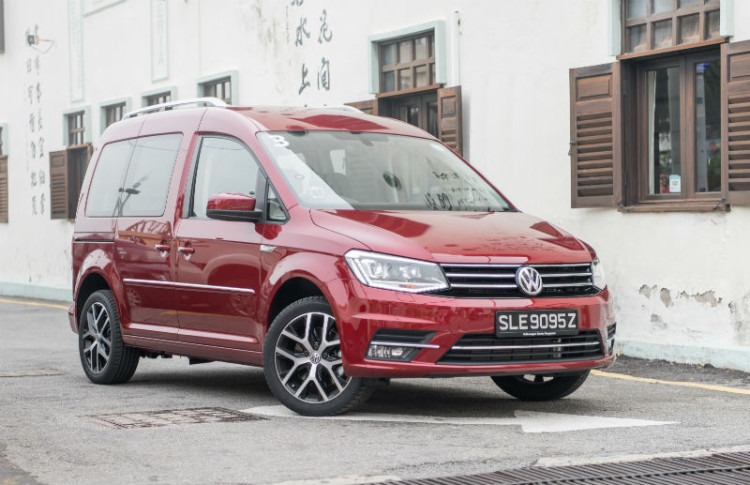 Mention that a vehicle is based on a concept car or sportscar and people invariably go, “Oh!” But when they are told that it is based on a commercial vehicle, their reaction is more likely to be “Oh?”.

Those coming face to face with the Volkswagen Caddy seven-seater are likely to have the second reaction.

So, does throwing in extra seats and adding rear windows make the Caddy – long known as a compact delivery van – an MPV?

Look beyond its boxy silhouette and you will begin to notice some car-like qualities. With xenon headlamps and daytime-running lights, it has some resemblance to the Touran MPV in front.

Its 17-inch alloy wheels and roof rails give it a rugged and sporty demeanour. Chrome elements on its door panels and front grille up the premium feel.

But its lofty ceiling, while making the interior feel more capacious than it actually is, also makes you think you are sitting in a van. So too the ceiling shelf above the cockpit.

Other touches are car-like, including Alcantara seats and faux leather door panels. Its multi-function steering wheel and 6.3-inch infotainment touchscreen monitor are no different from what you see in various VW cars.

The Caddy Maxi, with a longer wheelbase, is also available. For an additional $5,000, you get one extra cubic metre of space, which translates to more room for luggage when all seats are occupied.

The seats cannot be folded as flat as those in other MPVs, though. But the third row can be removed completely (screwdriver required) to accommodate extra-large items. Wide, sliding rear doors make loading up passengers or goods a breeze. You can configure the interior as an in-car picnic area, a mobile playroom or travelling kennel. 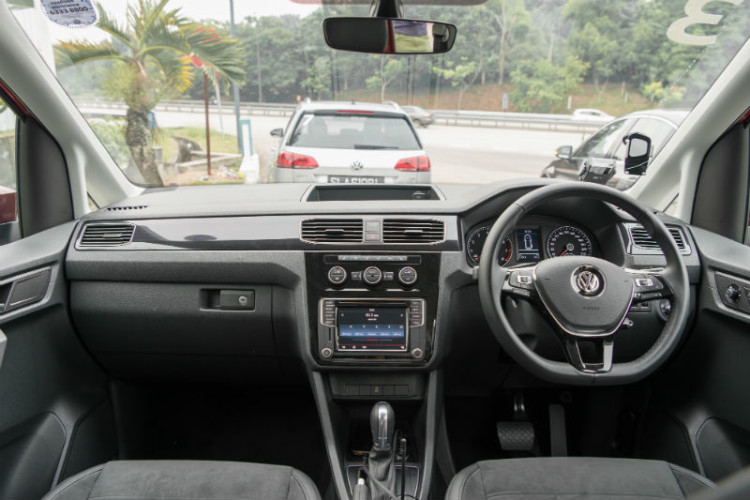 The two Caddy versions share identical widths (1793mm) – narrower than a Touran – and almost identical heights (the Maxi is 10mm taller at 1868mm). The Caddy Maxi is 470mm longer at 4878mm. It is 20mm longer and 148mm taller than the sizeable VW Sharan.

Parking may be a slight challenge, especially in older sheltered carparks. But the car’s reverse camera helps to some extent.

The Caddy’s cabin is welcoming. It has comfortable seats, two-zone climate control and Bluetooth connectivity. Because of its high ceiling, you tend to raise the driver’s seat higher. But you will soon realise that sitting like you would in a car offers the most relaxed posture.

The ride feels slightly springier, like in a van. But unlike in a van, you can have a proper conversation thanks to good noise insulation. A voice enhancer amplifies the driver’s voice through speakers, so that even third-row occupants can hear it clearly.

The third-row seats are raised to give passengers a roomier feel as well as better visibility, which is further enhanced by the Caddy’s generously sized windows.

Like many of its siblings, the Caddy is powered by a 1.4-litre turbocharged petrol engine mated to a seven-speed dual-clutch gearbox with manual override. Still, the people carrier needs cajoling to get a move on, but once it reaches cruising speed, it feels breezier.

Overtaking requires you to put pedal to metal, especially on Malaysian highways. At higher speeds, the Caddy also tends to veer sideways, while the Caddy Maxi feels more planted (perhaps because it is 60kg heavier).

All said, it may be hard to shed the car’s commercial vehicle roots completely. But people who do not have any hang-ups about this will find the Caddy to be a versatile and spacious MPV that is not too pricey.