There I was at the counter of a smoky Amsterdam cafe, where a friendly chap with glazed eyes made his recommendations from the menu. He offered me a choice between “uplifting” and “stoned”, but I only wanted a cup of Dutch coffee. In any case, I already experienced a mild mood lifter in the form of the new VW Touran.

The hatchback’s “Golf for seven” formula is familiar, but it’s now based on the current Mk 7 Golf model, which means an array of amenities and features unavailable in the outgoing Touran, which was based on the Mk 6 Golf.

The shape is still boxy, but with more creases and curves to “break” the boxiness, plus nice lights and attractive alloy wheels in a variety of designs.

More importantly for a compact multi-purpose vehicle, the cabin is roomier than before, thanks to a 113mm increase in the wheelbase and a 63mm increase in interior length. Despite its upsize, the car is 62kg lighter than its predecessor.

The cabin is classier, too. Unlike in the previous model, the plastics and compartment lids feel like “Premium Economy” instead of “Economy”, and the equipment has been upgraded to “Business Class”.

Up to nine airbags protect the occupants. Helping to avoid an accident in the first place are active safety features such as Front Assist with City Emergency Braking and Side Assist with Rear Traffic Alert. The latter feature makes it safer for the Touran driver when reversing out of a parking lot or changing lanes on an expressway. 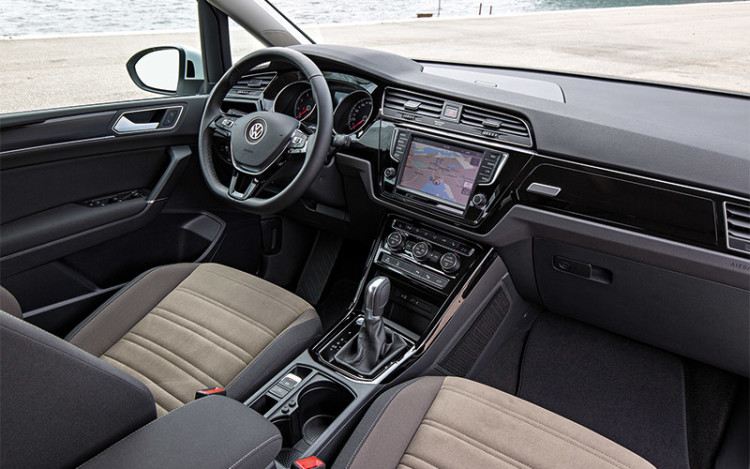 Cruising on the expressway is made simpler by the optional Adaptive Cruise Control, which maintains a pre-set speed (between 30km/h and 160km/h) and distance to the vehicle ahead by decelerating/accelerating accordingly.

The convenient cruise control makes it even easier to enjoy the Touran’s upgraded infotainment on the go. The high-spec version has a 6.5-inch colour touchscreen with Bluetooth connectivity, while the top-spec model has an 8-inch screen with integrated DVD player, a 64GB solid-state drive and an on-board Wi-Fi hotspot.

All the infotainment systems are compatible with today’s smartphones (Apple and Android alike), thereby multiplying the information sources and entertainment applications available to the Touran’s driver and co-driver (or backseat drivers, for that matter).

Everyone will be seated comfortably, on quality fabric upholstery (as tested). Access to the rear has been made easier, especially in tight spots, by doors that stay open at one of three angles (used to be just two).

Even the “airliner” trays have different angles of deployment, with the three tilted-down angles ideal for holding/reading a tablet (the trays in the old Touran only have two positions: up or down).

Headroom is as good as ever, shoulder room is slightly better than before, and space in the footwells is significantly better. And the three individual second-row seats are less narrow now. Also boosting the comfort of rear passengers are their own air-con vents and air-con control panel, which work very well, even with the ambient temperature in Amsterdam averaging 28 to 30 deg C at the time.

The rear doorbins have been made bigger. Other useful storage points (Volkswagen claims a total of 47) include two overhead lockers and a dash-top compartment – the latter more neatly integrated with the dashboard binnacle, and more spacious, too, than the previous affair.

Boot space in the five-seater is a generous 743 litres. The seven-seater variant has a much smaller boot with all seats deployed, but the pair of chairs in the third row are said to offer a bit more room than before.

The driving position has been improved by a nearer, more upright steering wheel, which also looks and feels much better than the old one.

Compared to the previous Touran, visibility from the driver’s seat is less fish-tank-like due to the higher dash-line, but the quarter-windows at the base of the A-pillars are actually larger. The rear view mirror is unusually sleek, yet its visual field is clear and wide.

On the move in the turbocharged 1.4-litre TSI Touran, with 150bhp and 250Nm put through a 7-speed dual-clutch automatic transmission, the mechanical smoothness is obvious.

The car is fairly quick for a compact people-mover, with a century sprint timing just below 9 seconds and a top speed of over 200km/h. It’s a relaxed cruiser, too, with the engine spinning at just 2000rpm in 7th gear while maintaining a steady 110km/h. The car is more fuel-efficient at the same time, consuming one litre less petrol per 100km (on the combined cycle) than the outgoing 1.4 TSI Touran.

This dad’s cab certainly has a pep in its step. Thanks to the strong torque and responsive powertrain, it’s likely to remain peppy even with the whole family on board.

After dropping the wife and kids off, the father at the wheel of this turbocharged MPV can almost relive his younger boyracer days by gunning the throttle, playing with the snappy paddle-shifters and taking his favourite corners more enthusiastically.

If the car is specified with Volkswagen’s DCC adaptive damping, he can select Sport mode to stiffen the suspension and corner even more eagerly. The effect is immediate.

Back to dad’s-cab mode with the family in tow, the Touran is a comfortable tourer ready for any road trip or school run. The ride is pliant, whether it’s on 215/55 R17s or optional 225/45 R18s, and very little noise intrudes into the cabin from the asphalt and airstream.

Refined, relaxing and well-equipped for household duties, the new Volkswagen Touran makes a superb multi-purpose family car. It will come to Singapore early next year.