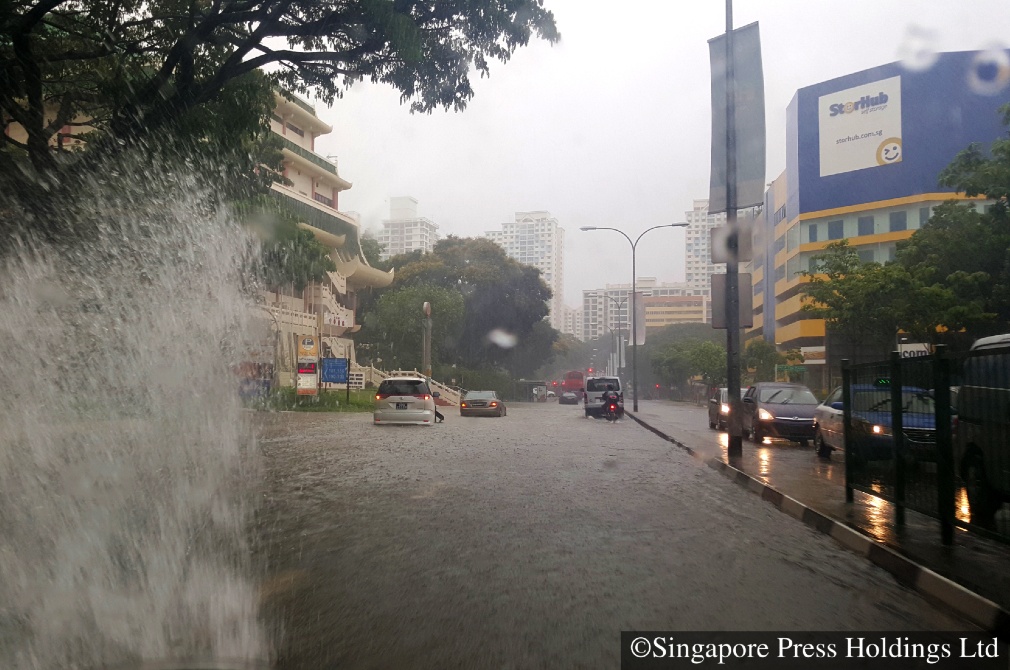 The flooded road at Toa Payoh Lorong 4 which was caused by the heavy downpour on 11 December 2015.

Driving in Singapore seems easy when you compare our road and traffic conditions to the ones in some neighbouring countries.

But there are still many things you must keep track of while driving. Are there obstructions, accidents or road works ahead? Is that car on the right trying to filter left? Do you have a motorcyclist riding in your blind spot?

That’s why good situational awareness and sound judgments are key to safe driving. And lest we forget, there’s another huge factor to consider: rainy weather.

It does not matter whether it’s a drizzle or a downpour. Wet weather heralds several dangers that drivers must avoid. Here are five to watch out for.

SAFE DRIVING DANGER #1: DRIVERS WHO DON’T SWITCH ON THEIR LIGHTS

Spotting these motorists is somewhat easier on a clear night. But in a heavy thunderstorm with visibility compromised, this can be almost impossible.

When the headlights aren’t switched on, the tail-lights also remain off. This puts the drivers of these cars at risk of being rear-ended.

So, the best way to avoid an accident is to leave an even bigger gap between your vehicle and the one in front. Wet conditions will result in longer braking distances, so doing this will give you an extra buffer. 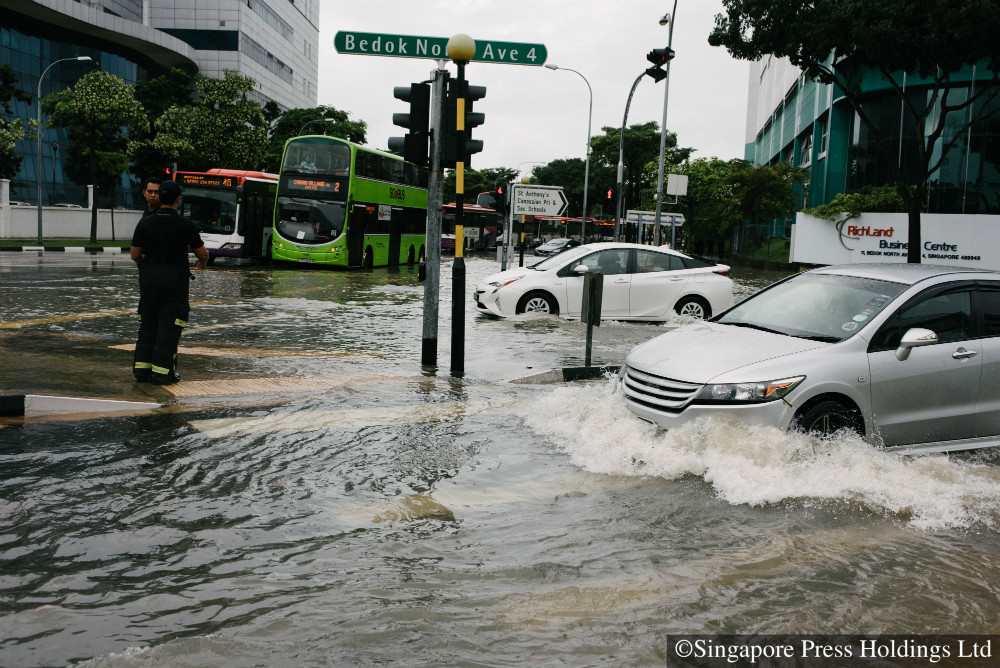 Vehicles at the flooded junction of Upper Changi Rd and Bedok North Ave 4 on 9 January 2018. Traffic slowed to a crawl as vehicles were unable to pass.

It’s not unusual to see water pooling (or “ponding” if you prefer) along the sides of the road.

This is especially true when you drive along the expressway. Notice how the cars in the rightmost lane create big waves as they cut through those big puddles?

Driving through standing water at high speed puts you at risk of aquaplaning, which happens when your tyres are unable to displace the water.

When you aquaplane, the tyres “float” on top of the water and you lose traction. This can result in an accident due to loss of control. Having good tyres and all-wheel-drive doesn’t mean it will never happen.

As part of a safe driving routine, stick to the middle lanes when it rains! 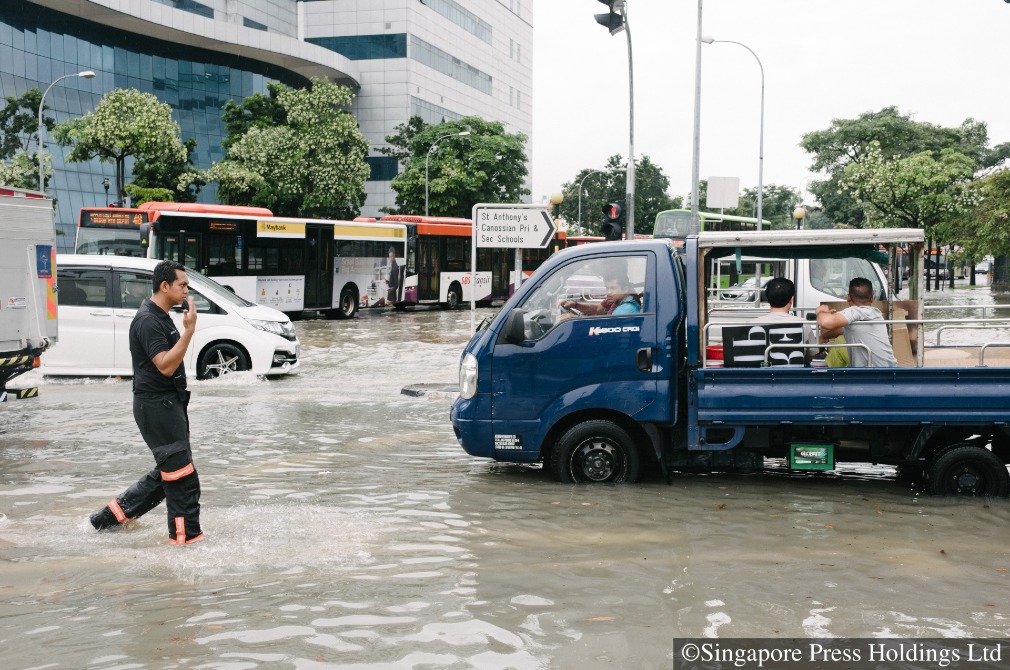 Safe driving means avoiding flood-prone areas. If your workplace is in such an area, carefully consider where you park your car. Although basement carparks are relatively safe, you cannot be 100 percent sure they will never get flooded.

Upper Changi Road and Bedok North Ave 4 are two such areas that have made the news. such as [email protected] provide warnings about heavy rains and flash floods.

Unless you’re behind the wheel of an SAF five-tonne truck, do not drive through a flooded road. This is especially true if the water has covered the kerbs/pavement! 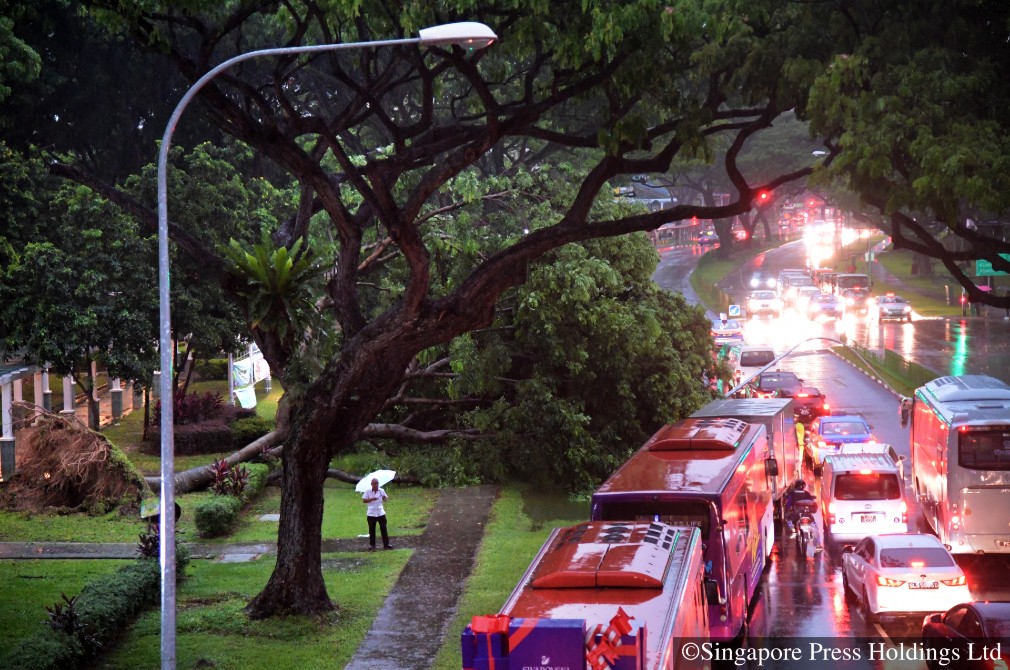 A tree fell near Geylang Polyclinic, caused by heavy rain on 14 November 2017. It toppled a lamp post and caused a traffic jam in the direction of Sims Avenue. Only the rightmost lane was passable to traffic.

Heavy rain and high winds cause branches to break and trees to topple. While we cannot predict when this will happen, it is still something to take note of.

Safe driving also means looking/scanning as far ahead as possible to monitor road and traffic conditions. If the rain isn’t too heavy, you can pay attention to the trees.

If you see a branch breaking off in the distance, you’ll have time to slowly filter into the next lane. This can help you avoid being stuck in the resulting bottleneck that’s sure to follow. 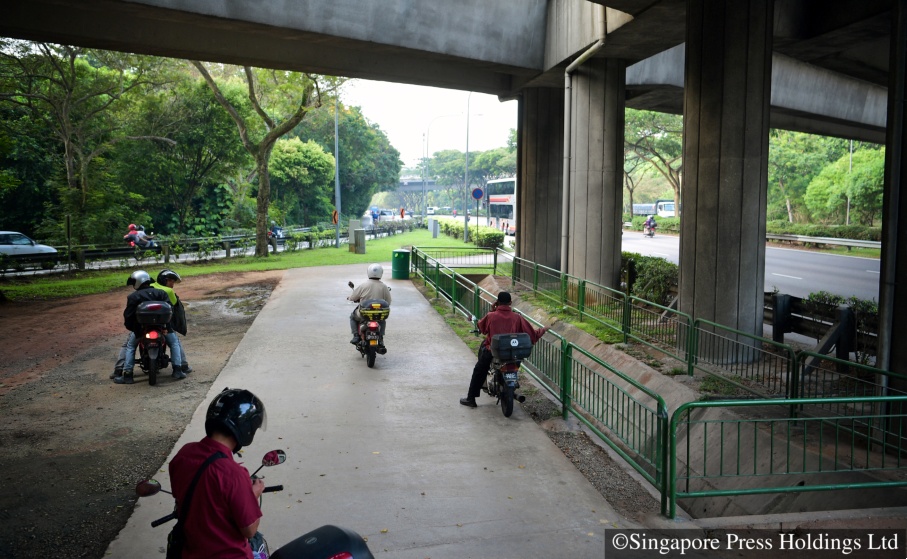 Motorcycle riders taking a break at a designated stop for motorcycles along the Bukit Timah Expressway (BKE) on 15 March 2017.

When it’s raining cats and dogs, it’s easy to assume that motorcyclists have taken shelter and are no longer on the roads.

This assumption is both wrong and dangerous. Not every rider is near an underpass that can provide a temporary shelter. Therefore, part of a safe driving routine means keeping an even keener eye out for them.

Take your time when changing lanes. I have often seen motorcyclists behind me who seem to not have noticed my blinking indicator.

However, I don’t think it’s always a case of them not noticing my indicator or blocking my manoeuvre. In heavy rain, riders are also subject to the same poor visibility and wet roads, which means slower reactions.

5 reasons why drivers don’t turn on their headlights
What is aquaplaning and how can you avoid it?
5 safety tips for driving in heavy rain
What to do in a flash flood
Here’s how to tell if you can drive through a flooded road