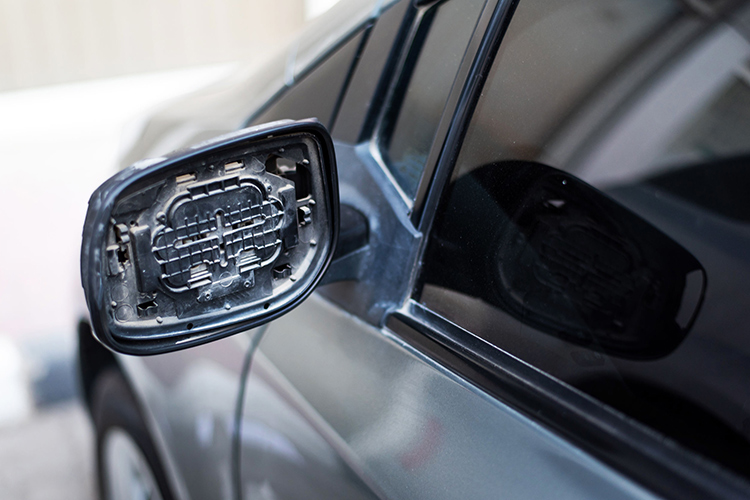 The wing mirror motor is the least of this mirror’s problems.

Most cars today have electrically adjustable wing mirrors. One day, while I was trying to adjust the angle of one of them, it would not respond.

I sent my car to the workshop to have it checked out. At first, I though perhaps the motor was just “stuck” or a cable was loose.

However, as it turned out, my car’s wing mirror motor is no longer working.

Or would replacing the entire mirror actually be less expensive?

Modern wing mirrors have motors as well as linkages for horizontal and vertical movements.

Sometimes, they have a built-in indicator light too. Although not common in Singapore, some mirrors also incorporate heaters.

To replace this whole assembly simply because the wing mirror motor no longer functions is indeed wasteful.

Assuming proper checks were carried out to determine that a faulty motor was responsible, replacing it would be the logical solution.

Cameras for car mirrors: why don’t more cars have them?

SAFETY TIP: HERE’S HOW TO ADJUST YOUR WING MIRRORS CORRECTLY

The reality is a bit more complicated.

Often, during manufacturing, the quickest and least expensive process is not sufficiently reversible.

What this means is that it may not be possible to disassemble a wing mirror easily.

Think of today’s wing mirror like a Swatch watch. Apart from replacing the battery, it is sealed and impossible to disassemble.

How does a 360-degree parking camera work?

Most workshops will consider it uneconomical to disassemble a wing mirror to replace the wing mirror motor. More crucially, not many mechanics know how to do it.

So, unless you can find a workshop which is able, there is really only one option available to you.

How does a 360-degree parking camera work?

Rolls-Royce Ghost Extended also makes an appearance
This site uses cookies to help us serve you better. By continuing to explore our site, you accept our use of cookies.I Accept