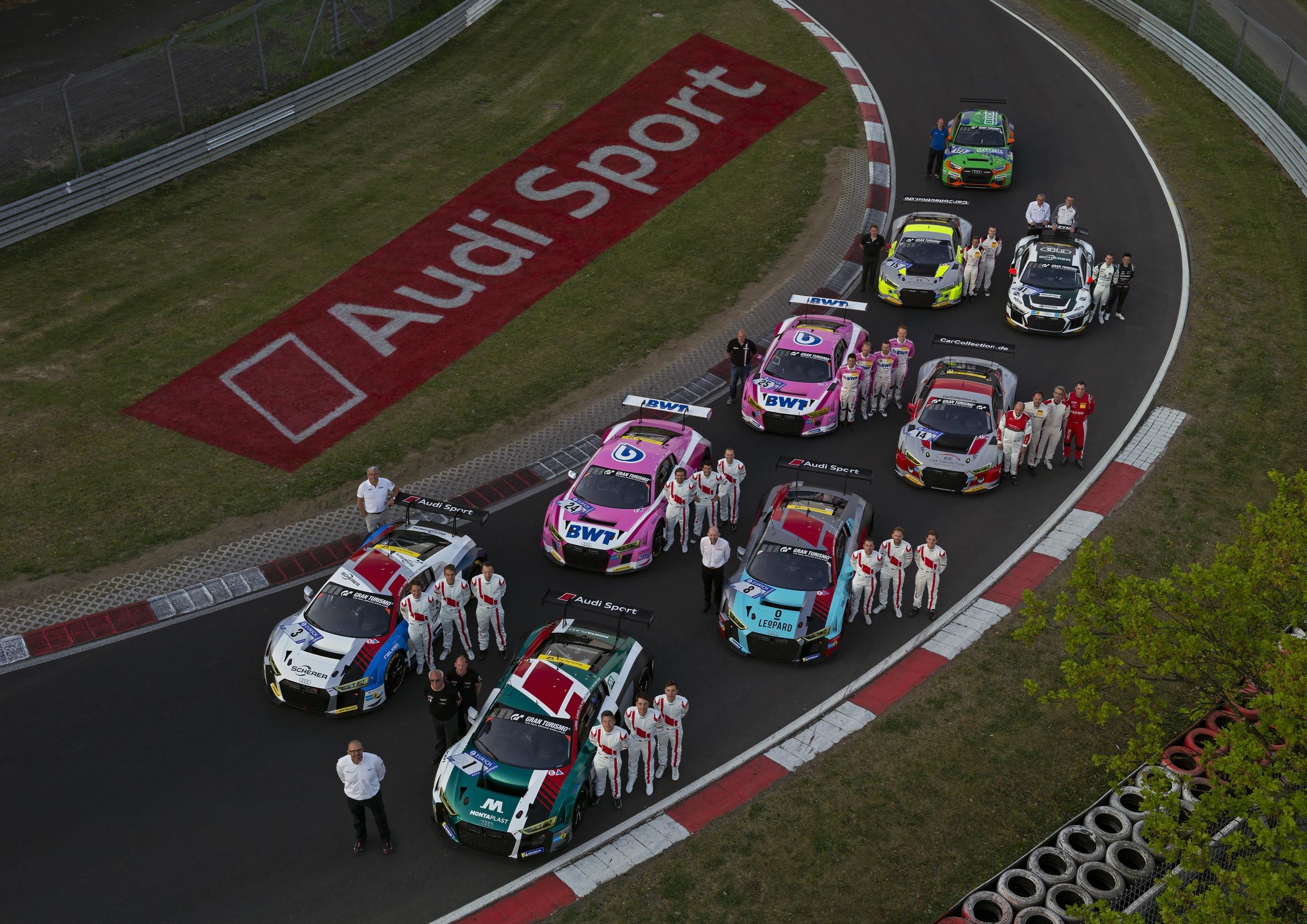 Audi Sport customer racing is celebrating its 10th anniversary in 2018. Following the presentation of the first generation of the Audi R8 LMS in 2008, the first customers relied on the GT3 sports car the following season and immediately clinched three driver championship titles. To date, the number of these successes has increased to 52 around the world, on top of other class titles which have been won and victories scored in 12-, 24- and even 25-hour races. Audi Sport customer racing has by now built 531 racecars for international customers.

33 race cars from the current model range are deployed to three classes at the Nürburgring. While the GT3 version of the Audi R8 LMS is battling for overall victory, the R8 LMS GT4 and the RS3 LMS are competing for class wins. At the same time, the Audi Sport R8 LMS Cup entrants are relying on both versions of the R8 LMS, whereas seven RS3 LMS cars will be on the WTCR FIA World Touring Car Cup grid.

The first two overall victories in the iconic endurance race at the Nürburgring in 2012 and 2014 were achieved by the first generation of the Audi R8 LMS that won the 24-hour race at Spa in 2011, 2012 and 2014 as well. During its seven-year model cycle, 137 racecars were built for the Asian, Australian, European, North and South American markets. The racecar is still popular and successful in classes for cars of older generations, such as those in Australian club sport. All owners benefit from a global service network and comprehensive parts supply.

In 2011, Audi Sport customer racing extended its programme by a model for a small but mighty niche. Customers at the Nürburgring and in various club sport series were provided with the Audi TT RS, a powerful car with 380hp, front-wheel-drive and excellent handling qualities. In addition to a large number of class victories in Europe and in the United States, the racecar in 2011 scored overall victory in a race of the VLN Endurance Championship Nürburgring against cars with clearly higher power ratings. In 2013, on clinching victory against high-calibre GT sports cars in the 25 Hours of Thunderhill in California, the Audi TT RS achieved its greatest success.

In 2015, the brand with the four rings presented two new racecars. For three years, the TT cup car was the exclusive model fielded in the Audi Sport TT Cup. The second generation of the Audi R8 LMS delivering up to 585hp sets standards in terms of safety and continues the string of success of the first model unchanged. Endurance racing victories at Daytona, the Nürburgring, at Spa, Bathurst, Sepang and Laguna Seca, plus championship wins around the globe, underscore its qualities. 103 racecars of this model have been built to date. It shares 50 percent of its component assemblies with the production model, including the low-maintenance and high-powered V10 engine.

At the next stage of its model offensive, Audi Sport customer racing launched the RS3 LMS at the end of 2016. The front-drive racecar for the popular TCR category delivers up to 350hp. Like the TT cup, this model is built within the corporate group together with Cupra at the Martorell site in Spain. 166 units of this entry-level touring car that won five titles in its first season have been made to date.

The most recent addition to the range is the R8 LMS GT4. A one-two class win in the 24 Hours of Dubai marked a brilliant start to the season in January 2018. In the first six months, Audi Sport has produced 65 of these models. The R8 LMS GT4 is made at Böllinger Höfe using the same manufacturing facilities as the production model, with which it shares 60 percent of its components.

Check out the Audi Sport Edition of the R8 Coupe.