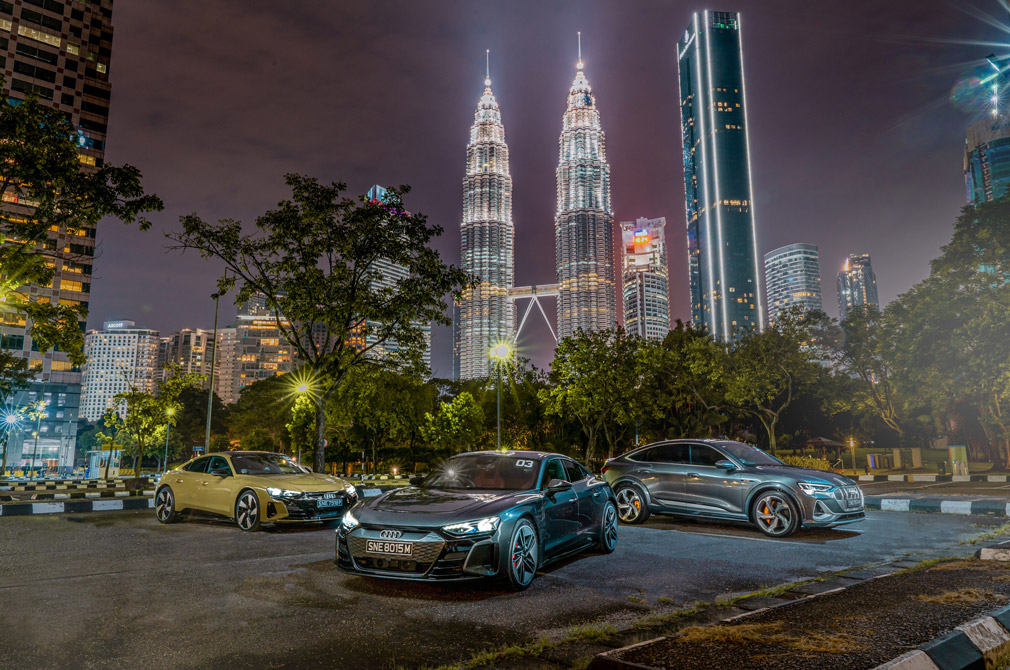 The pandemic had nothing to do with it, but the COVID years coincided with the sudden surge in electric vehicle (EV) sales.

Several brands have launched EVs in the last 24 months (some for the first time in Singapore) and this trend is only going to grow.

When the opportunity to take electric Audis on an extended drive arrived, it was one that I couldn’t miss. But instead of driving from Singapore to Kuala Lumpur, we did the opposite. We were flown to KL, the starting point for our drive back to Singapore.

It’s important to be well-rested before any drive, so we spent the night recharging our batteries at the Four Seasons.

Now, the three electric Audis we would drive the following day were also recharging. But instead of being snugly tucked under soft cotton sheets, these cars slumbered in the underground carpark at KLCC.

These four-ringed machines were not roughing it, though. They also got the five-star treatment, occupying the VIP parking lots with AC charging stations. Rated at 11kW, eight hours would be enough to ensure that the Audis would be as well-rested as their pilots. 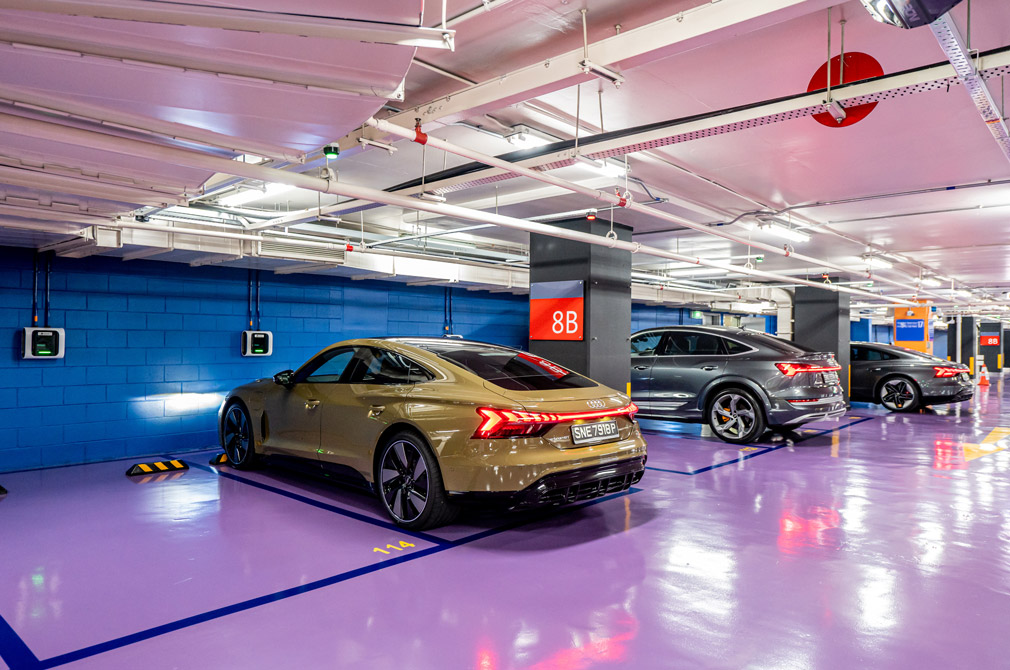 Tucked away in the KLCC basement, the e-tron models replenished their energy stores in preparation for the following day’s drive.

Now for an introduction to the three cars chosen for the KL to Singapore drive. First, given their popularity, there had to be an SUV in the fleet and this was the Sportback or “coupe” version of the e-tron, Audi’s first production EV model.

In “S” specification, the e-tron Sportback has an unusual drivetrain configuration even by EV standards. It is powered by three motors, a first for a production EV. One drives the front wheels while each of the rear wheels gets its own motor.

While power to the front wheels is distributed left and right via an epicyclic differential, the rear wheels are individually driven directly through a single reduction ratio gearbox.

What this essentially means is that a high-level of torque-vectoring is available at the rear with accurate power control and rapid responses.

The two motors at the rear are permanently active while the front motor is activated the instant there is a demand for additional power and traction. In total, the e-tron S Sportback packs 429hp and 808Nm of torque. 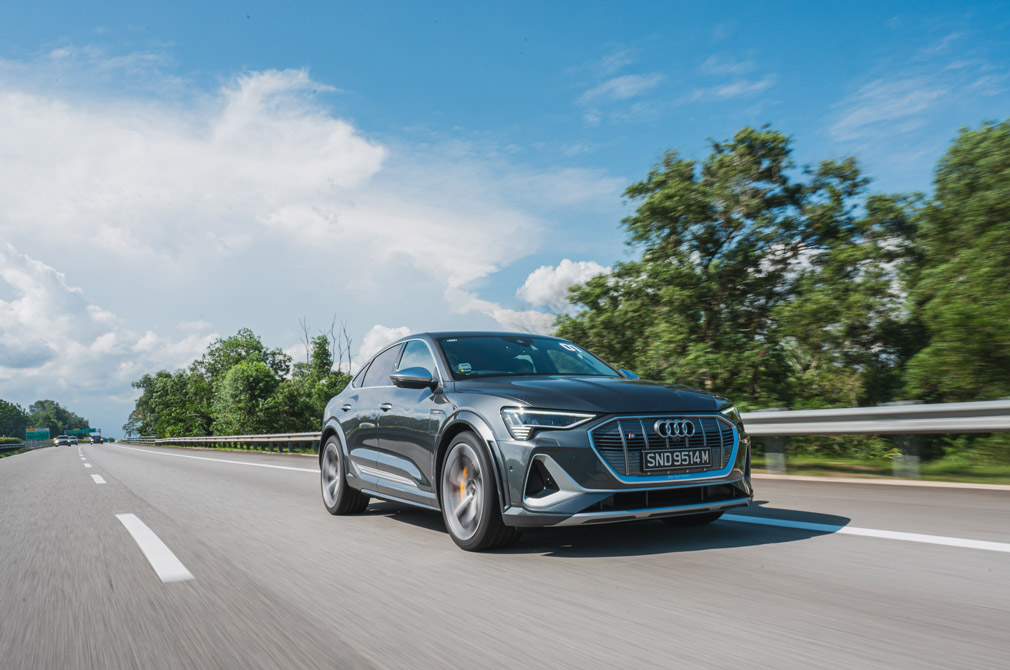 The e-tron S Sportback has a unique tri-motor drivetrain.

That’s incredible, considering that this is a hefty 2.6-tonne SUV with room enough for passengers and luggage.

Next in our fleet is the gorgeous e-tron GT. This is Audi’s first four-door “super saloon” with full electric drive. It has front and rear motors, with a two-speed transmission at the rear for even quicker take-offs from rest.

Although it is the “entry-level” GT model, this car’s two motors produce 469hp, with up to 523hp available during boost.

As with all EVs, it’s the torque that is mind-blowing: 630Nm (640Nm during boost). Zero to 100km/h is claimed to be dispensed in just 4.1 seconds. This car turns heads everywhere it goes and looks fast just standing still.

In addition to the GT’s two-speed rear gearbox, the RS gets an electronically controlled multi-plate locking differential at the rear. 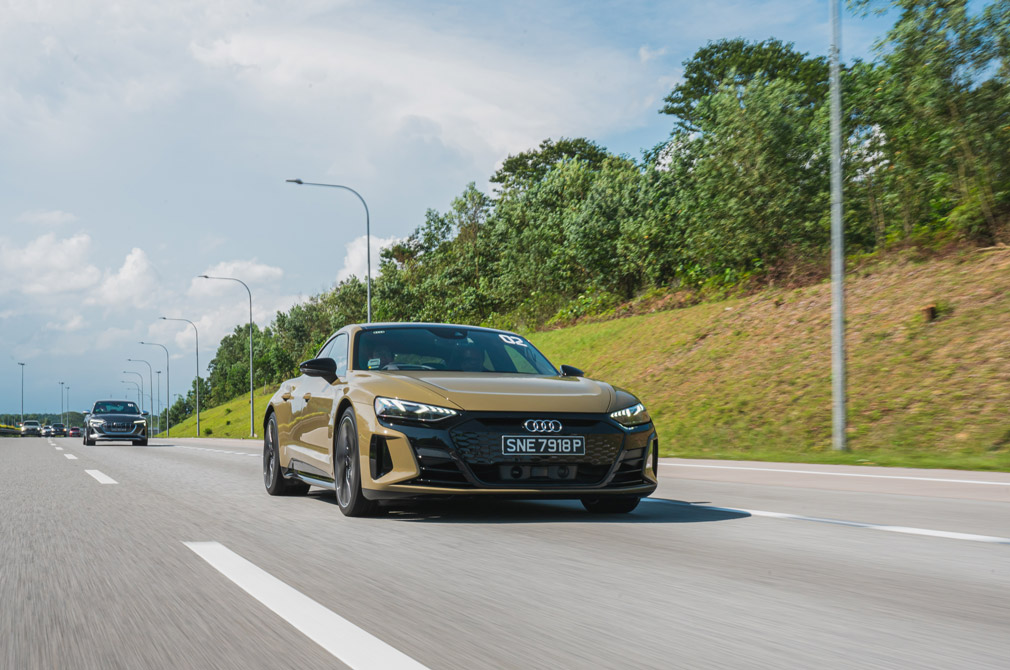 The RS e-tron GT can rocket its occupants from rest to 100km/h in a mind-blowing 3.3 seconds.

All three Audis have similar-sized batteries, 95kWh for the Sportback and 93.4kWh for the GTs. As with any EV battery system not all the energy is available to power the motors, and with these Audis, a maximum of 91% is useable.

As we set off from KLCC in the RS e-tron GT, the on-board display suggests we have a range of 401km. That should comfortably take us back to Singapore with some kilometres to spare. However, one’s driving style is a huge factor in energy consumption.

The RS e-tron GT’s smooth power delivery, high-speed stability and superlative acceleration simply encourage fast driving and as a result, the available range is down to 245km after just 115km.

Indeed, it was rather difficult not to play with the instant acceleration. You could fall back from traffic and still be able to zoom ahead of everyone again within seconds. 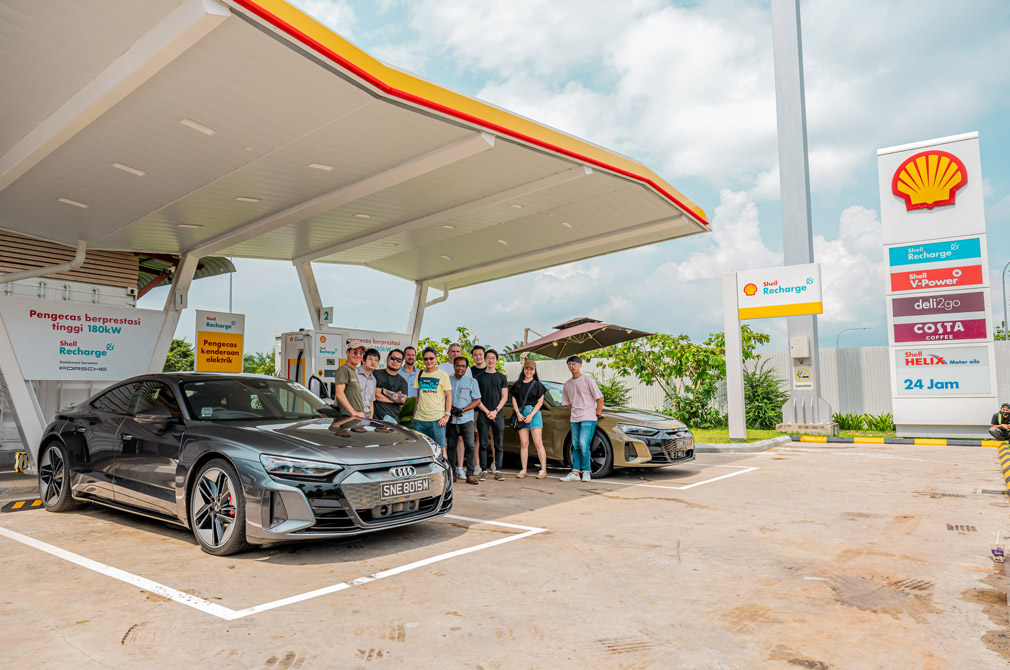 The RS e-tron GT consumed an average of 26kWh/100km, which is actually pretty impressive considering our sustained high speeds and frequent full-throttle accelerations.

Although we could probably have cruised gently back to Singapore at a moderate pace, we took the opportunity to experience EV-living at one of the charging facilities on the southbound PLUS highway.

There are currently about four stations on this stretch between KL and Singapore, with chargers ranging from 22kW to 180kW. Only the 50kW charger at the Caltex in Ayer Keroh and the 180kW charger at Tangkak are DC fast chargers, though.

The Audis are capable of accepting up to 270kW electricity input so we stopped at the 180kW station.

Each of the three electric Audi models was plugged in for 20 minutes and this cost RM80 for each car. Theoretically, this would give us a charge of about 60kWh, which if we were to maintain the same pace would give us an additional 200km of range for the e-tron GTs. 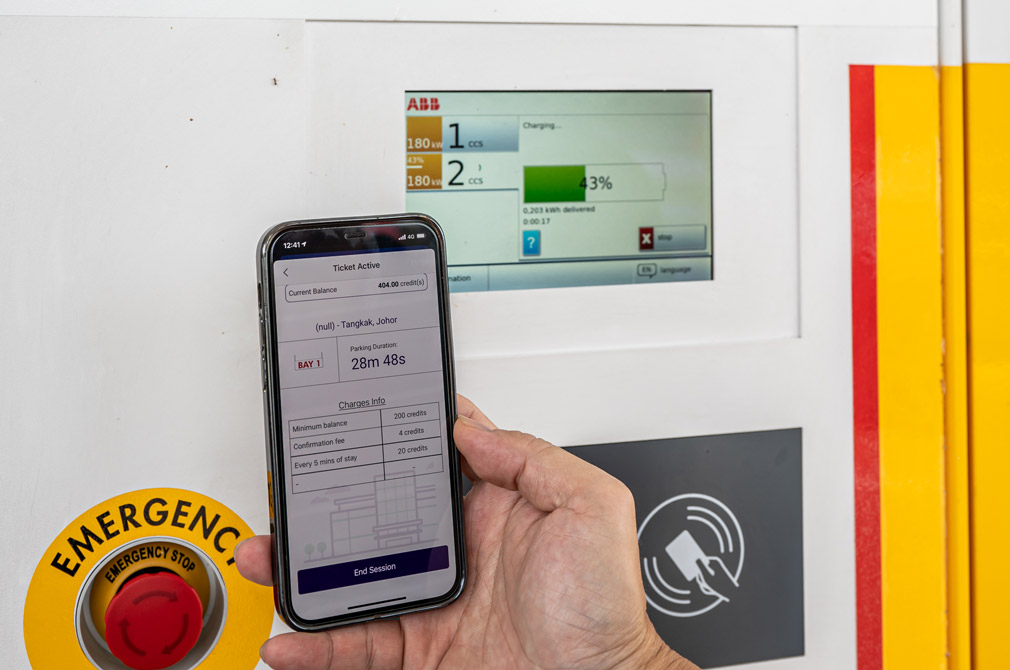 The heavier and slightly less aerodynamically efficient e-tron S Sportback (cd 0.26 vs cd 0.24 for the GTs) consumed significantly more energy than the GTs. We also noticed that battery charge depleted rapidly above 140km/h, averaging 35.6kWh/100km at one point.

No doubt, the sweet spot for the e-tron S is between 110km/h and 130km/h, but even at this speed range, you are beyond the legal speed limit on any Malaysian highway.

The three Audis we drove could have completed the KL to Singapore journey on a full battery charge without stopping to replenish. Of course, this requires discretionary use of the cars’ delectable breadth of performance.

Road trips, though, should be more than just expressway runs. Perhaps next time, we could drive these cars on some winding B-roads. That would make the journey even more memorable. 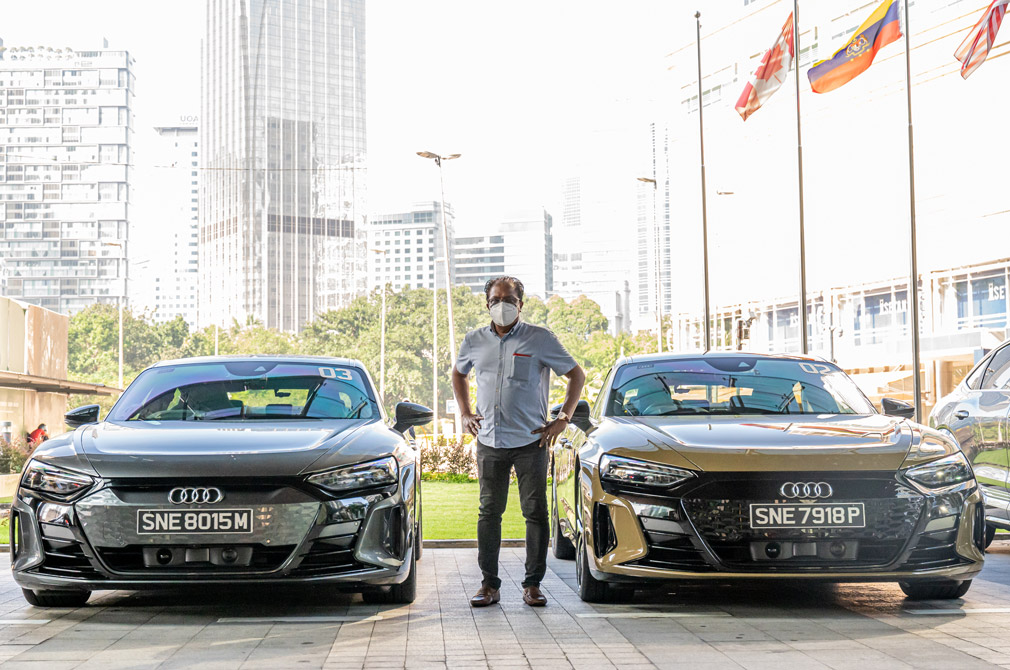 Torque‘s resident mechanical engineer, Shreejit Changaroth, takes a clear stance – he’ll choose either of the GT models over the SUV any day.