5 ways to stay safe on your e-scooter or hoverboard | Torque
Loading posts...
0 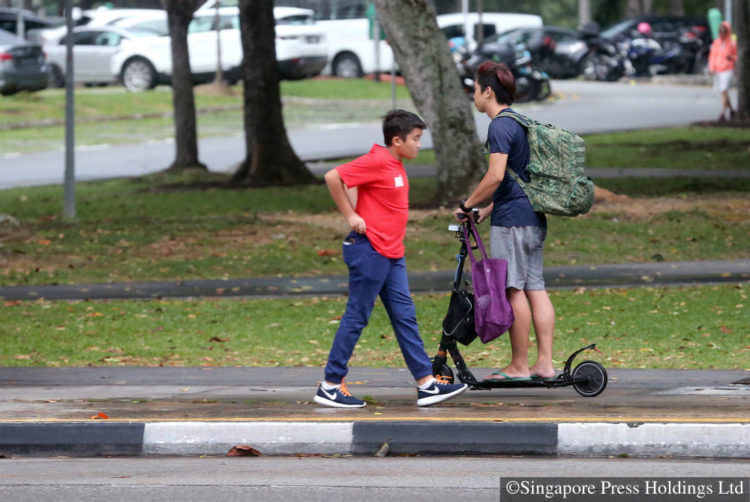 A pedestrian walking past a man travelling on e-scooter on the pavement at Pasir Ris Drive 1 on Sept 21, 2016.

Just last month, e-scooters came under the spotlight following an accident when an e-scooter collided with a woman pedestrian.

The accident has re-ignited safety concerns about the use of personal mobility devices such as e-scooters and hoverboards, which are increasing in popularity.

In April last year, the Government accepted the AMAP’s recommended guidelines on the use of bicycles and mobility devices. Here are some things to note:

1. KNOW YOUR DEVICES
There are four categories:

b. Personal mobility aids (PMAs): Include motorised wheelchairs and mobility scooters which are intended for elderly and disabled people.

2. MAKE SURE YOUR DEVICE MEETS SPECIFICATIONS
All PMDs and bicycles – motorised or otherwise – can be no heavier than 20kg unladen, and no wider than 70cm. The unladen weight requirement reduces the risk of injuries during the crash, and the width allows safe travel on footpaths.

Electric devices should also have a maximum device speed of 25km/h – with no modifications to increase the device speed.

The Land Transport Authority maintains a list of non-compliant devices.

PMAs are exempt from these physical device criteria, since they are necessary for their users and generally are not capable of travelling faster than a jogging pace.

3. USE YOUR DEVICE ONLY IN PERMITTED AREAS
The recommended speed limit on footpaths is 15km/h. Electric bicycles are not allowed on footpaths.

The recommended speed limit on cycling paths and bicycle-pedestrian shared paths is 25km/h.

PMAs and PMDs are not allowed on roads.

4. ENGAGE SAFETY FEATURES
Under the AMAP guidelines, electric bicycles and PMDs must have white headlights and red rear-lights. These lights must be switched on when it is dark.

If it is not possible to install lights on PMDs, users must be equipped with lights, for example, by wearing luminous vests or fixing lights on their helmets.

All electric bicycle users must wear a helmet.

5. PRACTISE ROAD COURTESY
Device users should always give way to pedestrians on footpaths and shared paths, under the AMAP recommendations. Pedestrians also have the right of way on pedestrian crossings.

If an accident occurs, users should stop to render aid and swop particulars, just as would be the case with motorists.