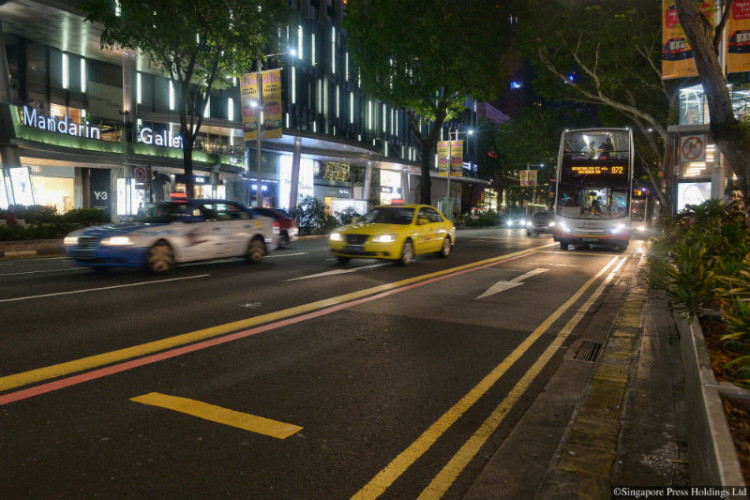 The bus priority boxes will be operational at the stops opposite Mandarin Orchard (above) and Midpoint Orchard.

Turning Orchard Road into a pedestrian-only thoroughfare is not a new idea.

In 1991, a final-year architecture student at the National University of Singapore envisioned a pedestrianised Orchard Road that is served by an underground road.

Such an underground road was actually highlighted in the Land Transport Authority’s 1996 White Paper. But it has yet to be built.

Since then, pedestrianising Singapore’s popular shopping belt has been mooted by various quarters time and again. The latest person to do so was Minister for Trade and Industry (Industry) S. Iswaran, who last week said such a move might be necessary to revive Orchard Road’s lustre as a premier shopping destination.

The idea seems appealing but it must be studied and deliberated thoroughly because, one, it is irreversible, and two, it could well have the opposite effect.

But note that most, if not all, are not premier shopping belts.

Think of Bangkok and Tokyo, which are full of traffic but remain among the world’s top tourist destinations.

Traffic, if managed sensibly, can add vibrancy to a precinct. In fact, a little congestion is a good thing sometimes. Fast-flowing traffic has no place in a major shopping street.

So, it would be hasty for policymakers to conclude that heavy traffic is what ails Orchard Road.

That is not to say pedestrianised streets hold no attraction at all. Again, if managed well, a clean and green walkable boulevard without traffic fumes can be a strong proposition. More so if the ambient temperature is in the mid-20s and the relative humidity is between 40 and 50 percent.

Would making Orchard Road vehicle-free restore its shine? To answer that, retailers and the authorities must first find out why the place has lost some of its appeal.

If it is because of competition from suburban malls and the new and hip Marina Bay district, it should be no surprise. It would be quite strange if all these new places fail to decant traffic from Orchard Road at all. If it is something that is fundamentally wrong with Orchard Road, then retailers need to identify and fix it.

Could it have to do with the place having no strong brand-name shops that are unique to the address?

Could it be a lack of wide and welcoming shop frontages which draw people in? Can people move seamlessly from the walkway into a shop, without having to negotiate steps, hedges or kerbs? Are the entrances or the paths to entrances visually and physically barrier-free?

Since 2004, the Government has been enticing property owners to build underground linkways along Orchard Road, such as one joining Paragon to Ngee Ann City. No one has taken up the offer despite the huge monetary incentives.

Is this reluctance to change also what is preventing Orchard Road from reinventing itself?

Has the underground traffic crossing at the junction of Orchard and Paterson roads marred the walkability of the shopping belt and, in effect, bisected Orchard Road? Those who have used the underpass will attest to its confusing, maze-like configuration.

Ironically, the planners who forced pedestrians underground at this junction are now talking about a Shibuya- style “scramble crossing” at the junction of Bideford, Cairnhill and Orchard roads.

Clearly, there is a need for a holistic and coherent approach to the issue. And it is an issue that has far wider implications than reviving the flagging fortunes of a Singapore icon.

For instance, what will closing Orchard Road do to traffic in the city? The road is a major and crucial arterial thoroughfare in the downtown network, and you cannot shut it down without impacting the network.

It plays a big role in the central area’s road network.

“Its removal will have a negative impact on the total road network’s capacity and adversely affect the city’s economic vitality,” he says.

More immediately, what will property owners do with the tens of thousands of carpark spaces in Orchard Road if it is fully pedestrianised?

They could, of course, convert them into retail or F&B spaces, but that is a huge gamble. What if that move creates a glut and rental plummets? What if the underlying issues that make Orchard Road less appealing now persist, and these spaces remain empty?

The effects of empty shopfronts may well cascade to a bigger exodus, and before you know it, Orchard Road would be a ghost town populated by walkers who are not doing any shopping.

Last but not least, the question that begs to be asked is: Will the people who patronise premier shopping destinations be the sort who prefer public transport?

Let’s be honest. The rich will always prefer cars, whether it is in Singapore or Paris or New York or Zurich. If Orchard Road becomes car-free, there is a good chance it will evolve into something other than a premier shopping district.

If that is something the planners want, fine. Perhaps then Orchard Road will finally be able to distinguish itself from the sea of mini (and not-so-mini) replicas which have popped up (and will continue to pop up) across the island.

But if not, they should sit back and examine all the issues and implications very carefully before deciding to crimp or ban traffic from the area.