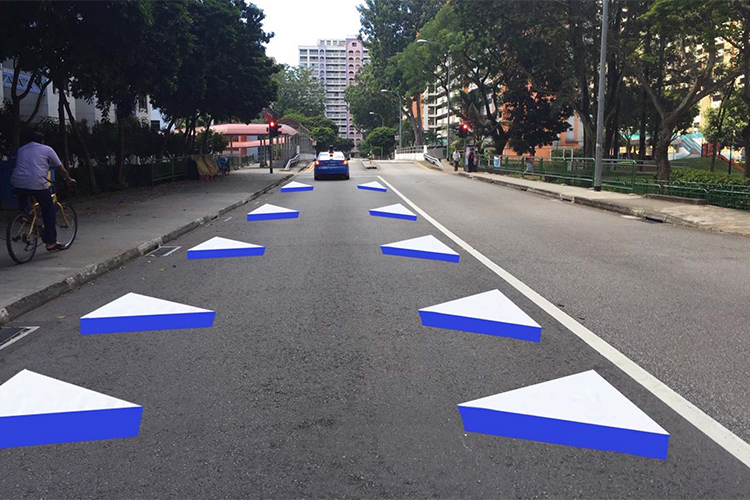 An artist’s impression of the new 3D road markings that will go on trial at the end of the month at the Whampoa Drive Silver Zone. The 3D images make the road look narrower and encourage drivers to slow down, said the Land Transport Authority.

New 3D road markings will be introduced at the end of this month at the Whampoa Drive Silver Zone to encourage motorists to slow down.

The markings, which will be painted with a material known as thermoplastic and make the stretch of road appear narrower, will be monitored for about six months, the Land Transport Authority (LTA) said yesterday.

Its spokesman said the 3D markings are being tested because the road geometry at the Whampoa Drive Silver Zone was found to be unsuitable for traditional speed regulatory measures such as strips and road humps.

These markings were adopted from Tokyo, where surveys have shown they are effective in capturing motorists’ attention, LTA said.

The trial in Whampoa Drive is part of the Silver Zone scheme, which was first announced at the parliamentary debate on the Transport Ministry’s budget in 2014, to enhance road safety for elderly residents.

According to the LTA, accident rates within the 15 completed Silver Zones have been reduced by nearly 75 percent since the scheme began.

On average, the number of accidents has decreased from 14 to four a year in these zones.

While the 3D traffic markings are unique to Whampoa Drive, road safety features such as roundabouts, raised junctions, centre dividers and additional crossings have been introduced in other Silver Zones.

Senior-friendly road safety features will be implemented in areas which have a high proportion of elderly residents and senior amenities such as medical establishments, the LTA said.

Hit the brakes on jaywalking