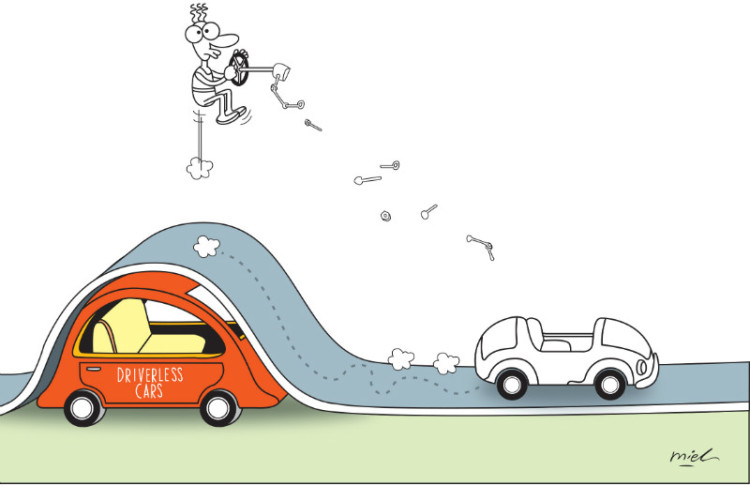 The challenges facing autonomous vehicles lie not with the readiness of technology. As demonstrated in ample trials in Europe and the US, cars are quite capable of getting along fairly well without a driver in many situations. In time, they will be able to do so in every situation.

Rather, the challenges lie with public willingness to embrace this new and alien concept. It is one thing to pronounce something as safe (and superior), and quite another to convince the general population that it is.

Would you board a pilotless plane if Boeing made one, even if experts said there are fewer variables in the sky than on the road? Now, imagine booking a cab, and one appears without a driver. Would your granny, for that matter your mum, get on board – even if it was not the Seventh Month? Would you?

Early lifts had human operators on board who controlled them with a lever. With technology, lift operators became redundant. But not overnight. Many building owners still employed them for years to help or put older users at ease.

This is likely to be the case for autonomous cars. The US National Highway Traffic Safety Administration divides autonomous driving into four stages: hands-off (car can keep its distance from another and stay in lane); eyes-off (car can react to some emergency situations); mind-off (driver can relax during entire trip); driver-off (vehicle can operate completely without a driver on board).

Although autonomous cars have been on trial for nearly 10 years now, no one has conducted a driver-off journey on public roads yet.

Accidents involving cars in so-called autopilot mode – including one which killed a Tesla owner in May – could be a sign that there are still bugs to be ironed out. Yes, companies like BMW and Mercedes-Benz are aiming to launch fully autonomous models as early as 2021. But how many will they sell?

Beyond fear of the unknown, public acceptance is also likely to be hindered by cost. These new-tech cars are likely to be far costlier. In Singapore, the cost difference will be magnified by the taxation scheme.

Singapore is ever eager to adopt new technologies if they result in better efficiency, though. The North-East MRT line, for instance, was the world’s first high-load driverless metro when it opened in 2003. Whether it is actually more efficient is still questionable, since driverless trains often take longer to come to a halt at stations and their doors take longer to open.

This eventuality might manifest itself on the driverless road too. Example: Many of our bus routes require drivers to make multi-lane changes within very short distances. Because a driverless bus will have safety as its overriding program, it will always err on the side of caution, and end up being stuck at a bus stop.

Until the entire vehicle population is driverless or until all drivers learn to give way to buses (neither is likely any time soon), we will still need a bus driver to stick his hand out the window to request for right of way. Like lift operators, the bus driver will also serve to put commuters at ease, even if he does not need to drive.

While commuters did not seem to have any qualms getting on board the North-East line when it opened 13 years ago, a train is a different kettle of fish. Because even in a manned metro, commuters almost never see the train driver.

Still, having a driver on board may prove useful in a situation such as the one that spooked Bukit Panjang LRT commuters last month when a train failed to stop at three stations. The anxiety could have been averted if there had been a driver on board, and if the system allowed him to apply the brakes manually.

What about driverless cars? Well, until we reach the driver-off level of autonomy, drivers will still be able to resume control of the car (like in an aeroplane). Most carmakers are working on this assumption. So the steering wheel and pedals will be around for some time.

But not Google. Google believes all that is needed in its driverless car is an emergency stop button. But US regulators are forcing the information giant to include steering wheel and brake pedal in its pod-like robotic cars. That is good news – imagine someone hitting the e-stop button at a railway crossing, or if the e-stop does not work as intended for one reason or another.

One other big hurdle that might impede the success of autonomous cars is the willingness of consumers to share.

Professor Carlo Ratti, director of the Senseable City Lab at the Massachusetts Institute of Technology, famously hypothesised that if all vehicles were autonomous, Singapore could see to all its mobility needs with just one-third of its vehicle fleet. It’s a scenario the Government is all excited about.

But that is feasible only with one huge assumption: that people would be ready to car-share and ride-share. Prof Ratti says that journey times would not be significantly lengthened. Even if the public buys this hypothesis, how many people will be open to sharing something that has for the past 130 years been “private”?