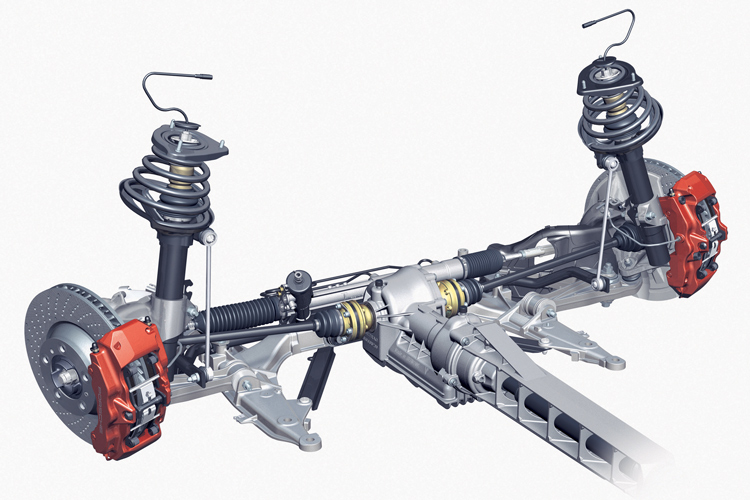 There is no mystery in the “wishbone” suspension being named after part of a bird’s anatomy.

A car suspension’s triangular wishbone arm bears a strong resemblance to the furcular (actual name), a strut that links a bird’s shoulders.

A bird’s wishbone is critical in helping the animal stay airborne. A car’s wishbone, on the other hand, keeps the tyres planted on the ground.

Compared to all other car suspension setups, the double wishbone is technically the most sophisticated.

Some chassis engineers will be quick to argue that the latest multi-link arrangements are superior. However, these are all derivatives of the double wishbone.

The classic double wishbone car suspension layout is formed by two rigid arms mounted roughly parallel to each other.

Each triangular wishbone is mounted at two pivot points on the chassis, with the third pivot point (at the apex) on the wheel hub carrier.

Together, they form the lower and upper links. The wishbones are often also referred to as A-arms.

To this end, the main task of a car’s suspension is to control the wheel movements relative to the vehicle body. This is so that grip, directional control and driving comfort are always maintained at their optimum.

The double wishbone offers a wide range of geometrical “tuning” to achieve the objectives.

Wishbone lengths, pivot axis angles and mounting locations can be tailored for the desired characteristics.

In addition, the wishbone emulates a three-member truss-like shape. This makes it inherently stiff for positive location of the wheel in the transverse plane (cornering) and longitudinal plane (braking/accelerating).

It’s not surprising, then, that Formula 1 cars continue to employ the classical double wishbone arrangement at both ends. So do most purpose-built racecars.

But this does not mean that other types of car suspension arrangements are inferior. As a matter of fact, the other more widely used and well-known name in car suspensions is the MacPherson strut.

The name comes from Earle MacPherson, the engineer who designed this relatively simple independent suspension unit. It can be used at the front or rear, with front- or rear-drive.

Used in almost every front-wheel-drive car, MacPherson’s strut is made up of one lower arm and a telescopic spring damper unit.

These not only link the hub carrier to the top of the wheel well, but also provides the steering pivot. The MacPherson strut does not offer the design flexibility of the double wishbone. But its relative simplicity, ease of assembly and low cost are its advantages.

They are also the reasons for its popularity in the global car industry.

The arrangement also occupies less of the engine bay than a double wishbone. The use of MacPherson struts in the rear of the chassis is less common.

This is because the telescopic spring-damper unit encroaches into the backseat/boot area.

A more compact alternative setup is therefore used in the rear instead. Ford was one of the first automakers to incorporate front MacPherson struts extensively in saloon cars, including the first Escort model.

The single lower arm provided the track control, while the anti-roll bar served as the lateral locating link.

This provided long suspension travel and hence good ride comfort. However, wheel location in both planes was heavily dependent on the rubber bushes.

These bushes are located at the single point where the lower arm was mounted to the chassis. They are also placed where the anti-roll bar connected to the track control arm.

Said bushes did not last very long, causing wheel misalignment and annoying steering wobble. Both the Mk 1 and Mk 2 Escorts suffered from this ailment, but it was cheap and easy to fix.

The bushes used at the mounting points are asymmetric in design. This means they are sufficiently flexible for vibration isolation, yet stiff enough to resist movement if geometric integrity is compromised.

In engineering theory, the simple MacPherson strut may not be equal to the more sophisticated double wishbone. But it has served many cars perfectly well, including the Porsche 911.