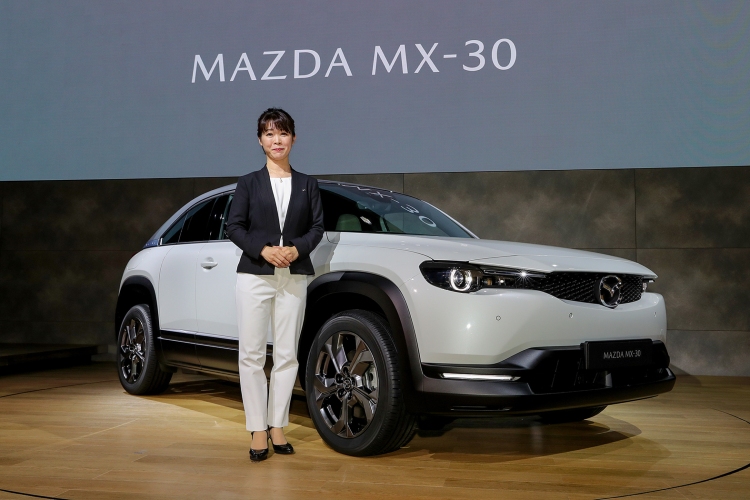 Tomiko Takeuchi poses with the MX-30.

Mention the term “electric car” and Mazda won’t be the first manufacturer that comes to mind.

That’s because in recent years, the Japanese carmaker has been better known for its work on internal combustion engines. It seemed to be pre-occupied with its Skyactiv technologies, such as Skyactiv-X.

It’s not known for hybrids either, as it has no full-hybrid models.

The Mazda 3 M-Hybrid is only a mild hybrid. Its electrified drivetrain alone cannot power the car. And it is not even a 48-volt system.

So, the launch of the MX-30, Mazda’s first electric vehicle (EV), comes as a surprise.

The second surprise is the car’s name. The “MX” prefix previously only applied to the MX-5 roadster. Mazda explains that “MX” is for models that challenge assumptions. 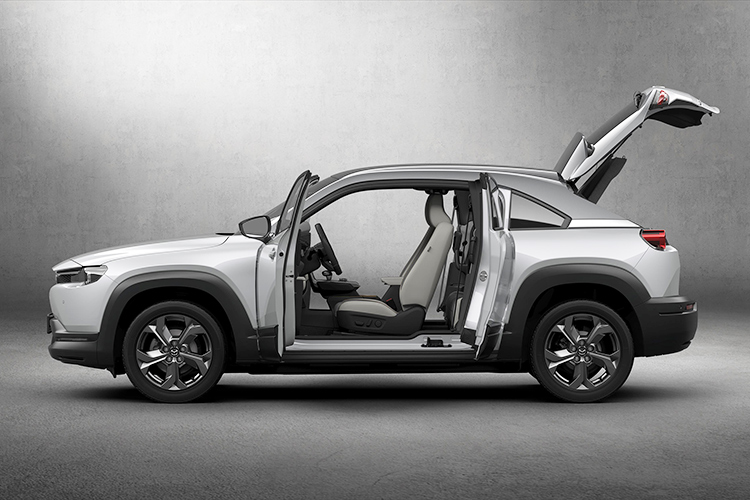 The MX-5 was created to challenge the assumption that affordable two-seat roadsters were dead.

The third is that the MX-30 crossover was conceived and developed in-house. Mazda did not ask Toyota for help, despite both car-makers having a Joint Technology Development contract for EVs.

The fourth surprise is the MX-30’s 200km range. That figure is only half of what rivals such as the Kia Niro EV and Hyundai Kona Electric (long-range version) offer.

Then there is the fact that the MX-30’s chief programme manager, 45-year-old Tomiko Takeuchi, is a woman. This is the first time in Mazda’s history that a new car project was headed by a woman.

That is something, as the automotive industry in Japan is a male-dominated one.

If Takeuchi-san was ever fazed by all this, she didn’t show it. She remained relaxed and smiled throughout the interview.

WHY AN EV NOW?

I asked her why Mazda was only introducing an EV now, after so many carmakers have launched theirs. “It is all part of our plan,” she replies.

Takeuchi-san remembers exactly how long it took to create the MX-30: three years and five months.

Naturally, my next question was if she remembered how she felt upon learning she would be the MX-30’s chief programme manager.

She laughed. “I had this overwhelming feeling that there would be a lot of work ahead!”

But she says the pressure reached its peak last year. That’s when the team really felt the weight on their shoulders.

“We have to succeed. Everyone’s expectations are so high and it is my duty to execute this properly.”

Since EVs are not suitable for all countries, the MX-30 will also have a range-extender variant. It will utilise a petrol-driven rotary engine as a generator to charge the batteries, but not drive the wheels.

This MX-30 hybrid model will not need to be plugged in to recharge the batteries.

I asked Takeuchi-san how many more EVs we can expect in the next five years. “I cannot reveal that. But I can say that all Mazda models will be electrified by 2030.”

I query Takeuchi-san about the MX-30’s range, which is short compared to rivals.

“We are aware. But the team took other factors into consideration. Firstly, increasing the range means increasing the battery capacity, which increases weight.”

“Lastly, lithium-ion batteries are still costly. So, increasing capacity would further raise the price of the car.”

In Singapore, the MX-30 is expected to cost $113,000 before COE (prices are correct at time of publication). Naturally, Mazda is keeping mum on when the model will reach Singapore.

WILL IT CATER TO DRIVERS?

Before the interview ends, Takeuchi-san addresses an enthusiast’s concern. Mazda has a reputation for making driver-focussed cars. How would the MX-30 stoke the driver’s emotions, given that EVs are silent?

Apart from handling and driveability, she says the production models will also have sound generators. Through these, drivers can hear a car’s reactions to their inputs, and respond accordingly.

If that’s not enough to assuage worries, perhaps the fact that Takeuchi-san is a car lover who owns the iconic first-generation MX-5 roadster, will.

Now, how’s that for a final surprise?