Mufflers: Are they the same as exhausts? | Torque
Loading posts... 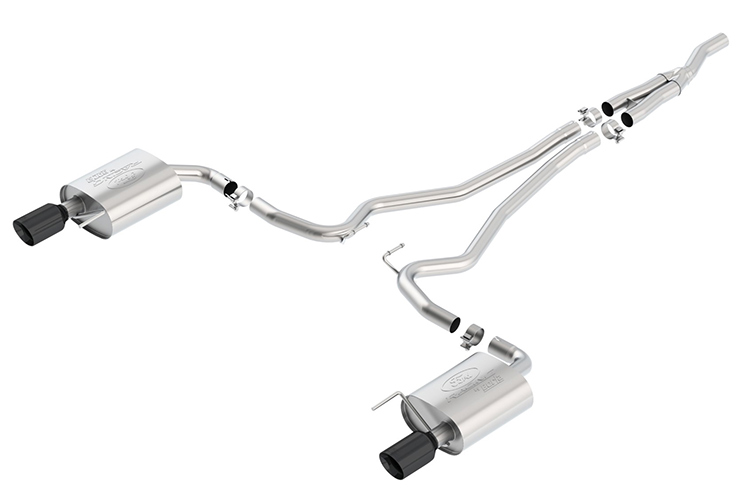 An exhaust system from Ford Performance Parts. The mufflers are the box-like components preceding the tailpipes.

You may have heard motorists use the word “mufflers” when talking about exhausts, and vice-versa.

To the uninitiated, it seems like a muffler is essentially an exhaust system.

This is not true. In fact, a muffler is only a part of the exhaust.

Before we continue talking about mufflers, let’s define the role of the exhaust.

What does the exhaust system do?

As it name says, it deals with the exhaust gases, which are produced by combustion.

The intake valves are where air and sometimes fuel (if the engine has port fuel injection) enter the cylinder (combustion chamber).

After combustion, the gases, which are harmful and toxic, pass through the exhaust manifold and down into the headers.

It then passes an oxygen sensor, before entering the catalytic converter, which removes harmful emissions.

In some cars, there is a second oxygen sensor and second catalytic converter to further reduce emissions.

Only after that will exhaust gases enter the muffler, before finally exiting through the tailpipe.

Whew! So what do mufflers do?

It does this via a complex series of twists and turns that reduce the sound volume.

Can I delete or remove the muffler to make my exhaust louder?

Legally, no. Without it, your exhaust would be so loud that your neighbours would report you to the police.

If you want to modify your exhaust the legal way, get an LTA-approved aftermarket unit.

These aftermarket exhausts are usually cat-back systems designed to sit behind the catalytic converter.

Even aftermarket exhausts have mufflers, too.

Also, it is illegal to “de-cat” or remove your catalytic converter.

Direct injection engine: Does it have more carbon buildup?