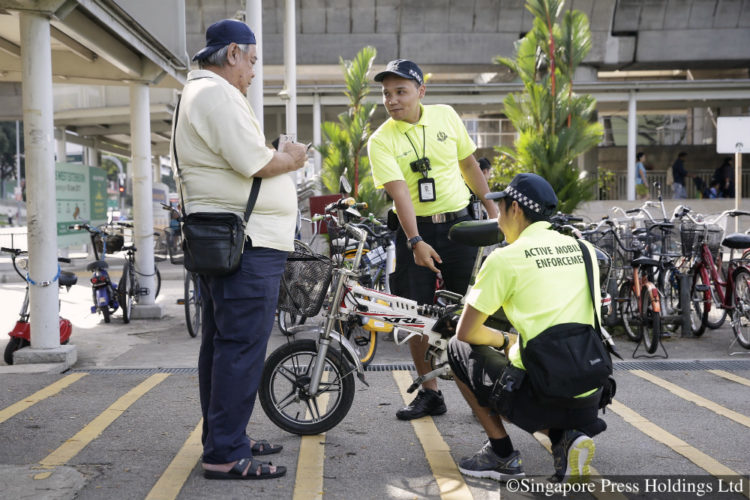 In his bright-yellow T-shirt displaying a Land Transport Authority (LTA) logo, Mr Asrul Fahmi Rashid, 30, tried to wave down an e-scooter user speeding along a pavement.

But the rider was going too fast and swerved around the Active Mobility Enforcement Officer (AMEO), nearly knocking him down.

“He was going over 20kmh… It was a near miss,” said Mr Asrul, who has been with the AMEO team since the LTA launched it in May last year.

The errant rider, who eventually pulled over about 50m away, was issued an advisory to refrain from dangerous riding.

AMEOs said cyclists and e-scooter riders have sometimes ignored them, mistaking them for people peddling items on the street.

Encounters can turn nasty, with some cyclists and users of personal mobility devices (PMDs) yelling at AMEOs after being stopped.

But the team of officers, whose number has grown from 16 at the start of the year to the current 24, had limited powers then.

That will change with the passing of the Active Mobility Act in Parliament in January. When the law takes effect later this year, the LTA and other agencies, such as the National Parks Board, will be given powers to issue summonses that could result in fines of up to $5000, or jail terms of up to six months, for reckless riding behaviour.

The Sunday Times spent about four hours last Monday with Mr Asrul and his colleague, Mr Shaik Shameer Ali, 34, in the northern part of Singapore.

They stopped and inspected electric bicycles for illegal modifications, and advised cyclists and PMD users to ride carefully. They were also on the lookout for PMD users riding illegally on the roads, and indiscriminately parked shared bicycles left behind by users.

Mr Shameer, who joined the team three months ago, said that when he sees cyclists or PMD users who are not flouting any rules, he smiles and tells them to take care and ride safe.

But there are nasty encounters. About two weeks ago, he stopped a cyclist for having an illegally modified electric bicycle with a throttle. Throttles, which let users move without pedalling, have been banned on electric bicycles since 2005.

“He was trying to create attention… He kept raising his voice,” recalled Mr Shameer, adding that the cyclist demanded to know why he was stopped.

But Mr Shameer said he stood his ground and calmed the man down, before giving him a summons.

“It would be a lie to say I wasn’t afraid, but I have to keep my composure,” he added.

Mr Asrul said that when he first started out, about one in 10 riders he encountered was using a PMD. The rest were on bicycles, including electric powered ones. But the number of PMD users he encounters has grown to six in 10, by his estimation.

While AMEOs are assisted by over 700 community volunteers who promote safe riding, there are also more users and more contraventions. The Government has said in Parliament that cycling and the use of PMDs are part of the push for a “car-lite” environment in Singapore.

The speed, weight and size of some PMDs can pose a risk to pedestrians and other shared path users. Under the new Act, PMDs must adhere to these specifications: a maximum weight of 20kg; a width of up to 700mm; and maximum speed of 25kmh.

Mr Asrul said: “(Now), we can only stop the riders and make an assessment… We can’t take any action. We will advise them that… if their (e-scooter’s) handlebars are too long, they may hit people when they go through bus stops.”

PMDs are also being used on the roads – an illegal move under the Road Traffic Act. Between January and last month, the LTA seized 172 devices because of this.

Motorised bicycles, or e-bikes, are allowed on roads, cycling paths and shared paths.

The enforcement officers work one of two shifts a day:6.30am to 3pm, or 2pm to 10.30pm. They are deployed in areas based on feedback received from the public and volunteers.

Since the start of the year, 850 advisories have been issued for unsafe riding behaviour. Some 14,500 educational brochures on safe riding have also been handed out.

Members of the public who have seen the enforcement officers at work welcomed their presence.

Mr Tan Ah Ba, 65, a painter, said in Mandarin: “I’ve seen some young people cycling recklessly – they go very fast and do not look out for pedestrians. It is good to have these officers around to emphasise safety.”

Ms Eunice Ng, 22, a part-time ticketing officer, suggested a change of attire. “The T-shirt they wear is too bright, and people can spot them from afar,” she explained, adding that most cyclists and PMD users would behave themselves only when the officers are in sight. 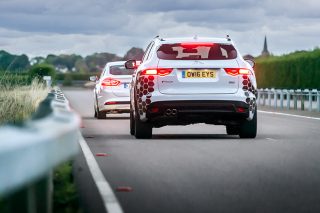