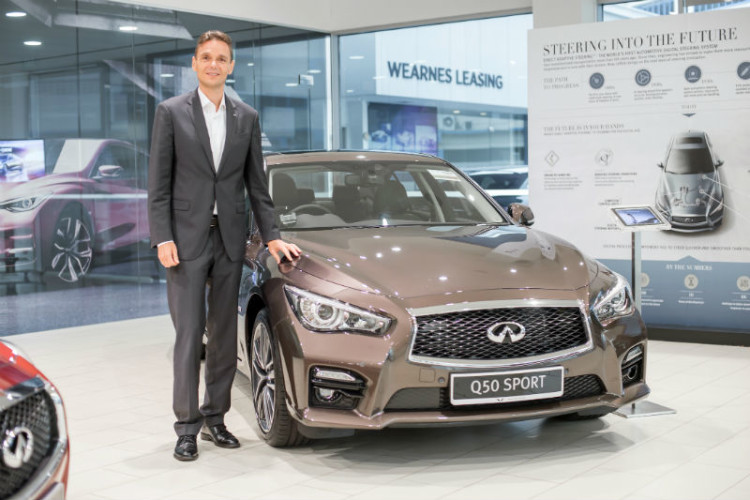 Why did he leave a century-old premium brand for a relative newcomer?

Speaking to The Straits Times when he was in Singapore early this month, Mr Krueger, 50, says: “There are new prospects out there and I think Infiniti was a huge one. Infiniti may be a younger brand in comparison to other players in the luxury car field, but I see a lot of opportunities for us to grow.

“It’s wonderful to develop a brand, a company and a team, to take part in new product development and see them emerge. For these reasons, I decided to take on this challenge.”

The lanky German is more familiar with leaping into the unknown than most people. In 2005, he embarked on a record-setting 900km walk to the South Pole from the Ronnie-Fleichner ice shelf.

Once described as a true-blue BMW man, he is now focused on growing Infiniti, Nissan’s luxury arm which is arguably less successful than Toyota’s Lexus.

But the brand is putting pedal to metal to boost sales. It has embarked on a major product offensive, starting with the Q30 compact hatchback last year, followed quickly by the QX30 crossover.

It has refreshed the QX60 SUV and will launch the new Q50 sedan, to be followed by the bigger Q60.

“Apart from just developing the company, we also have to improve our dealer network and have good partners,” he says. “This is something I tend to emphasise a lot.”

One such partner is Wearnes Automotive, which he says is “doing a fine job but has room for improvement”. About 220 new Infinitis were put on the road here last year – more than double the year before.

Globally, the brand had a record-breaking performance last year with sales growing by 16 per cent to 215,250 vehicles.

“We must not rest on our laurels,” Mr Krueger says. “Infiniti has to continue to grow. That is our prime focus now.”

Part of this growth strategy lies in maintaining its exclusivity and providing premium services to its customers, he notes.

An industrial design graduate from the University of Applied Science in Munich, the head of Infiniti began his journey in the automotive trade as a designer at Mitsubishi Motors Europe in 1992. Two years later, he joined Daimler and was responsible for the interior design of the Smart micro-car.

How does he feel about Infiniti’s design language?

“Infiniti has a very strong and unique design language,” he says.

“Our design language is a strong one that’s developed over time, which distinguishes Infiniti from our competitors.”

His favourite models include the Q30, which shares many components with the Mercedes-Benz A-Class tech. He is also partial to the new Q50 sedan, with its 2-litre variant sharing its engine and transmission with Mercedes-Benz.

The Q50 also has a 3-litre V6 version that puts out 400bhp and comes with drive-by-wire adaptive steering.

The German is no stranger to Singapore. He was head of BMW Asia here from 2004 to 2008. He says he still recalls his favourite dish – Hainanese chicken rice – with fondness.

That is not half as surprising as his choice of car for his next extreme adventure. It is not a Land Rover Defender, Jeep Wrangler or Mercedes-Benz G-Wagon, but a tarmac-loving Infiniti Q50.