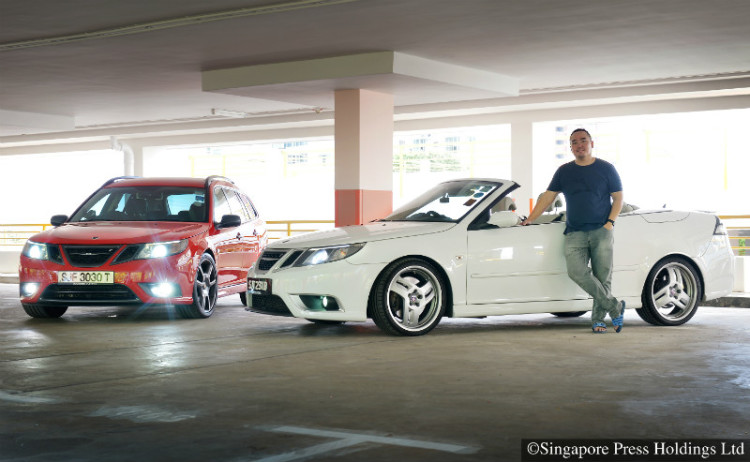 The Saab car brand may be no more, but it has not lost its appeal for civil engineer Dennis Leu.

“These are among the most powerful cars that Saab made,” he says.

Before these, Mr Leu had three other Saab 9-3s, all station wagons.

“I am a wagon man. And you can say I am crazy about Saabs,” he says with a laugh.

When asked why he loves them, he replies: “They have the performance without the flashiness and are good value for money.

“They also look a little quirky. Which carmaker designs rims to look like fans?”

Mr Leu, who owns a small construction firm, uses the wagon on weekdays, while his wife Elaine, 38, also a civil engineer, drives the convertible.

“She loves the view of the Shenton Way buildings and Gardens by the Bay from the convertible,” Mr Leu says. “She says she will not allow me to sell the car.”

Mr Leu’s love for Saabs started in 2005. He was working overseas and came back to Singapore for a one-week break. “I didn’t have a car and an architect friend lent me his Saab to drive for one week,” he says. “I loved it immediately.”

He came back to Singapore in 2007 and could not find a Saab wagon that he liked, so he bought a Volvo S60 T5 instead.

As for the convertible, he is the fifth owner. He says he tracked down the family who owned it and “literally begged them to sell it to me”. 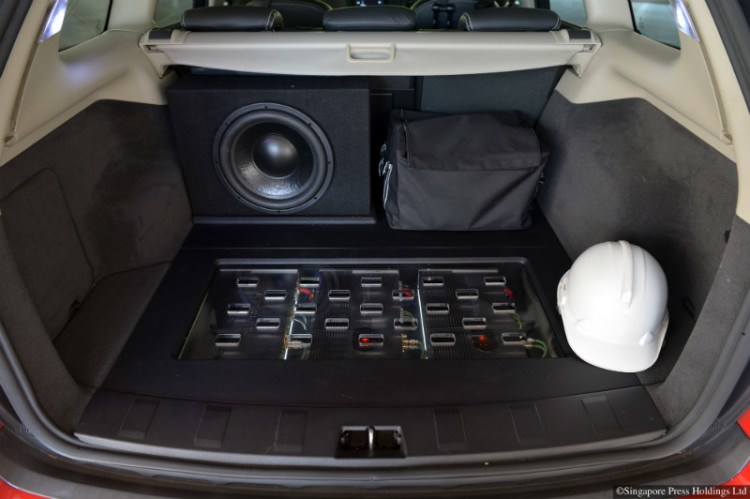 “The multiple (ownership) transfers were among the family members, so it’s all right,” he says, adding that he paid about $115,000 for the car in 2013. It was then five years old.

His love for Saabs also found him like-minded friends in the Singapore Saab Club (www.saabstance.com). Mr Leu took over administration of the website forum earlier this year.

He says the club has a few hundred members, of which about 50 log in to the forum regularly.

“We provide peer support for one another, like where to go for servicing, because the Saab agent does not stock parts anymore,” he says.

“We also followed the fate of Saab closely. At one time, we were hopeful that the brand might survive, but not anymore.”

Saab is famed for making turbocharged cars that pack a punch in the mid-range.

It was sold by its Swedish owners to General Motors in 2000. GM in turn sold the cash-strapped brand to Spyker Cars in 2010. The new owner struggled financially and eventually filed for bankruptcy in 2011 when a deal with potential Chinese suitors fell through. Production of the brand stopped.

In 2012, holding company National Electric Vehicle Sweden (Nevs) bought assets from the Saab bankruptcy sale and restarted production of the 9-3 in 2013 in small numbers. But it went under in 2014, filing for bankruptcy.

Last year, Nevs found Chinese partners and started producing cars in Tianjin, China, but under a new Chinese brand, bringing the storied Saab history, which began in 1945, to its final chapter.

Land Transport Authority records show that there were 726 Saabs in Singapore at the end of last year. The last Saab was sold by local agent Trans Eurokars in 2014.

“I will drive my Saabs until their COEs expire. I may even renew the COE of one of them, most likely the convertible.”

Mr Leu says he may replace the Saab wagon with a Volvo wagon when its COE expires.

“Maybe the Volvo V60 Polestar with the twin-charged engine with 367bhp,” he muses. “It is the closest thing to my wagon.”