Singapore has up to 1.5 times more private-hire cars than cabs | Torque
Loading posts...
0 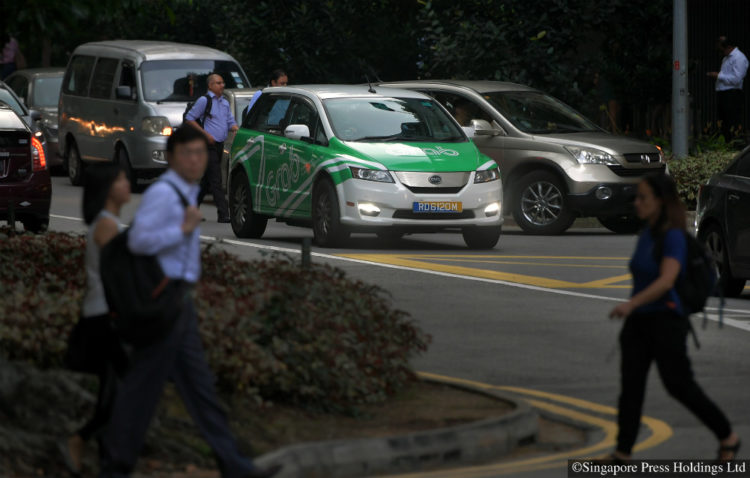 A record 21,894 cars were converted to private-hire vehicles last year. There were 41,297 such cars as at last month.

The number of chauffeur-driven private-hire cars has soared by nearly 70 times since Uber and Grab entered Singapore in 2013 to 41,297 units as at last month.

The population is now 1-1/2 times that of taxis, according to numbers released by the Land Transport Authority (LTA) for the first time.

Before the two ride-hailing companies entered Singapore four years ago, there were fewer than 500 such cars. Then, they were mainly cars operated by limousine firms.

The surge in private-rental car numbers is welcomed by policymakers, who believe they help cater to peak-hour demand unfulfilled by traditional taxis.

But experts warn that the business may not be sustainable.

Singapore University of Social Sciences transport researcher Park Byung Joon said that as Uber and Grab are dishing out “a lot of promotions and incentives to drivers and commuters”, they would find the private-car hire services a better deal.

But in the long run, this is “definitely not sustainable”.

Dr Park said: “Private-hiring is not a high-tech industry. It is not too difficult to develop a booking app. As long as you can build up a driver network, anybody can start a private-hiring business. 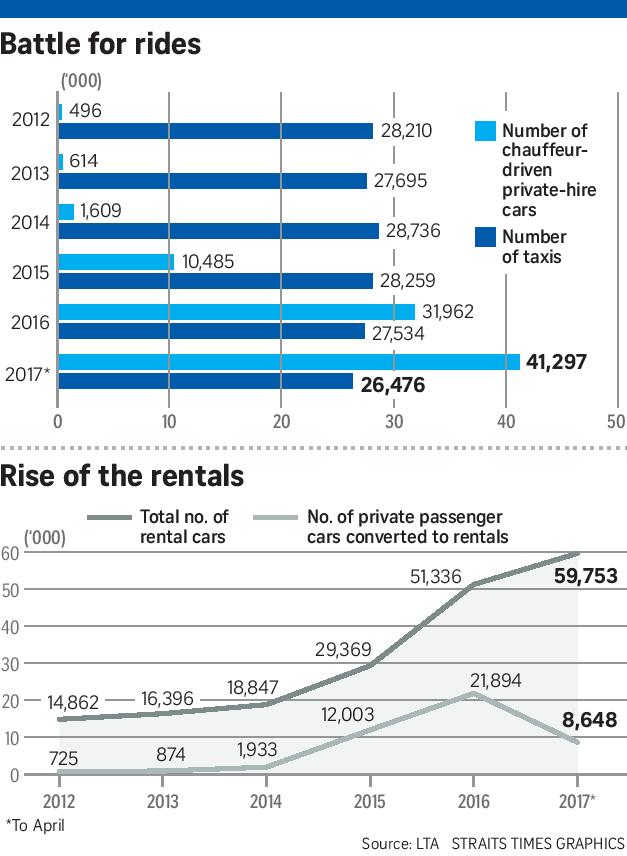 “Uber knows that, too. They want to establish a market presence before anybody else does.”

National University of Singapore transport researcher Lee Der-Horng said that with 26,000 taxis and 41,000 private-hire cars, “the market is well oversupplied”.

This has led to intense competition, which is “damaging the taxi industry”. He said: “If at the end, private-hire operators admit that their business practice is unsustainable, the taxi industry in Singapore would have been affected negatively.”

He also said the fact that Grab is looking to buy SMRT’s taxi business suggests that Grab “realised that running taxis is more sustainable… in the longer term”.

Nanyang Business School Adjunct Associate Professor Zafar Momin said the explosive growth in the private-hire population is not a good indicator of how well the industry is doing.

He said: “Taxis are likely to clock comparatively more hours per week and spend more time on the road. In fact, many drivers of private-hire vehicles are part-timers and enter the profession to secure access to a car which they otherwise would not be able to afford.

“Second, one should look at the number of customer trips or rides provided. Again, taxis are more likely to win here as well, despite having fewer vehicles.”

Even so, Prof Momin reckoned the private-hire industry can grow further. “There is still ample room for continued growth,” he noted, adding that the business will “continue to accelerate and evolve… and could get more compelling as this evolution progresses”.

Lawyer Bryan Tan, 46, said: “You can see when your ride is coming, and you know how much the fare is going to be. And the drivers know they are being graded, so they are more mindful about service.”

While ComfortDelGro has also launched fixed fares, he said: “Once you make a switch (from cabs to private-hire), you are less likely to switch back.”