Speed cameras in Singapore: How can I spot them?
Loading posts... 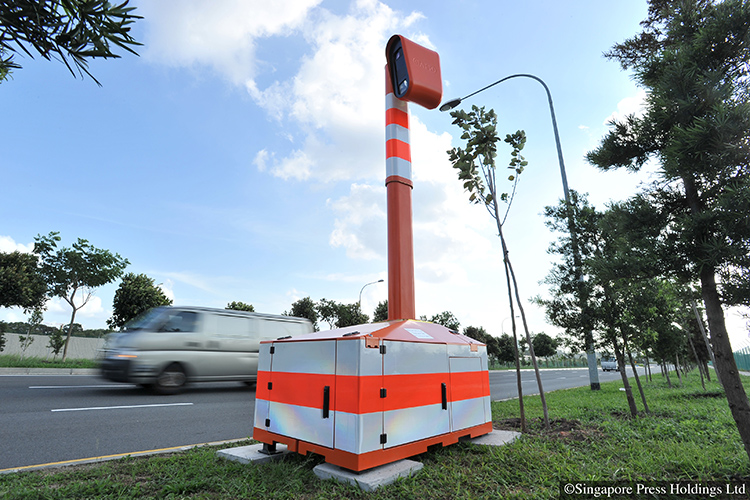 A speed camera deployed by the Traffic Police.

ERP gantries aside, speed cameras are the bane of motorists in Singapore.

The fixed cameras along expressways are easily seen.

The Traffic Police has even put up warning signs to alert motorists to their presence.

But what about the speed cameras that are not as easily spotted?

Here are a few things you can take note of.

This is especially true along Lornie Road, Adam Road and Farrer Road.

To see if there are cameras or speed traps currently in operation, try to spot silhouettes from afar.

If you see one, it is probably a lone officer manning a camera.

However, I have also seen officers on a bridge who are sitting on the ground.

The speed cameras in these instances, are neatly hidden within the plants/shrubs.

2) Cars suddenly or inexplicably slowing down
Sometimes, the angle or camber of the road is not conducive to spotting speed traps on bridges.

In cases like these, you should pay attention to the traffic on the opposite side of the road.

Are the cars slowing down or travelling at an unusually slower pace?

If so, cameras may be deployed – facing their direction.

Note that the new laser speed cameras can monitor and capture vehicles across many lanes.

Just because the speed trap is facing the opposite side doesn’t mean it can’t nab you.

3) Watch for stripes
This is particularly useful when you’re in the KPE (Kallang-Paya Lebar Expressway).

The cameras here have horizontal orange stripes across them, making them easier to spot.

Even if you don’t see an officer on the bridge, you should assume that the camera is deployed nearby.

AVOID SPEEDING AND DRIVE CAREFULLY!
The best way of avoiding speed traps is to ensure that you don’t speed.

Being able to spot cameras is great.

But if you’re travelling too fast anyway, you’ll never see them in time!

Local radio stations also try to alert motorists of speed traps. Tune in to your favourite stations more often to get a heads up.