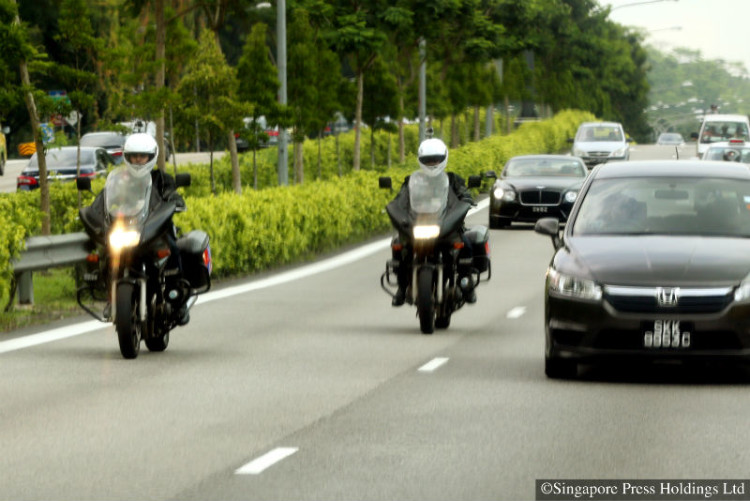 Motorists using mobile phones while driving, lorry drivers breaking speed limits and failing to keep left, and motorcyclists weaving across lanes recklessly – the Traffic Police’s (TP) latest enforcers have been catching them all.

A video posted on the Use Your RoadSense Facebook page shows the TP’s Special Operations Team (SOT) on black “stealth bikes” as they clamped down on errant drivers, like a speeding motorcyclist going against the traffic flow.

“These ‘men in black’ look out for common traffic offences, such as driving while using the mobile phone, and ensure that motorists are ever-alert on the roads – a timely reminder not to #PokemonGo and drive,” the post said, referring to the popular Pokemon Go mobile game in which players catch virtual creatures using mobile devices.

The Singapore Police Force, which shared the video on its Facebook page, said the traffic situation continues to show improvements in various areas, but a minority of road users endanger the lives of others.

It added: “The TP will continue to take strict enforcement against such errant motorists even as we focus on education and enforcement efforts, reminding them that all road users have a role to play in keeping our roads safe.”

Also called covert officers, the TP’s stealth bikers have been on the roads since June. Clad in black jackets, the officers ride black 900cc motorcycles that are more manoeuvrable and have proven effective in curbing errant motorcyclists.

TP commander Sam Tee told The Straits Times that it was not easy for officers to go after motorcyclists in unmarked cars as they can lose sight of them in heavy traffic. In contrast, the “stealth bikes” are much more manoeuvrable.

TP statistics show that last year, 4875 motorcyclists and pillion riders were injured, a 5 percent rise from 2014. This group also accounted for almost half of all road deaths last year – 72 out of a total of 152.

In their first month of operations, TP’s stealth officers detected more than 700 violations.

The SOT’s officer commanding, Assistant Superintendent Firdous Haniff, 30, said the unmarked motorbikes have proven effective and that foreign police forces, such as those in Australia, employ similar tactics.