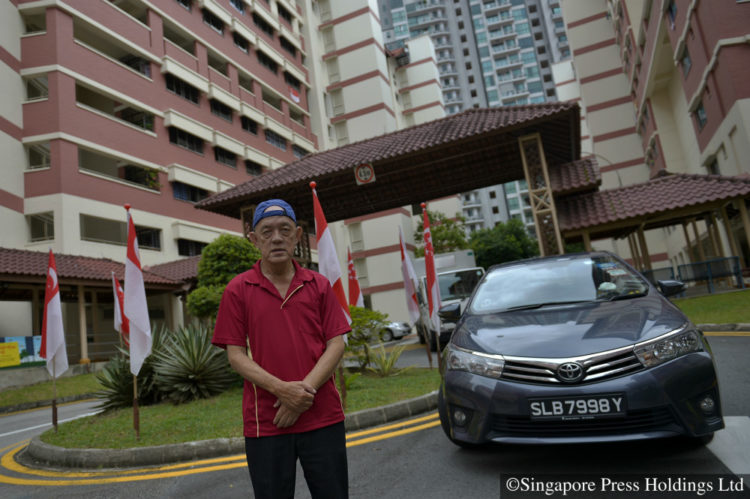 Mr Lim Chwee Choon, 72, started working as a taxi driver in 1981. He has seen many changes over the years such as the use of technology like GPS and ride booking. Last year, he made the switch to become a private-hire driver.

When he started driving a taxi in 1981, Mr Lim Chwee Choon, then 36, often had to ask his passengers for directions and, at times, decline to take them if they were unsure of the route.

While such behaviour is unheard of today because of technologies such as Global Positioning System, Mr Lim said they had little choice back then. Vocational training was very basic and cabbies were taught only the routes to a few destinations, such as major hotels and the airport.

There were street directories but trying to page through one while driving was not a good idea, he said. Map apps did not exist then, he quipped.

Mr Lim, now 72, said it took him about three years of plying the streets and memorising routes before he could get around on his own.

“It was not easy but passengers were also more understanding,” he recalled in Mandarin.

“Nowadays, if you take a route which they don’t like, they will be unhappy. Passengers are always telling me, ‘Uncle, my time is precious.'”

With more than three decades of driving under his belt, this “taxi uncle” has seen the changes in one of Singapore’s most iconic professions, which began in the 1930s, and is facing its greatest disruption now with competition from ride-hailing apps.

Mr Lim himself has jumped “ship”.

Last year, he became a Grab driver, trading in his taxi for a Toyota Corolla Altis private-hire car.

Asked about the animosity between taxis and private-hire cars, Mr Lim said: “Everyone has their own views. For me, I prefer to take calls. As you know, very few people are hailing taxis from the street now. Taxis still have advantages, such as being able to queue at the airport. There’s no right or wrong way.”

Looking back, Mr Lim said he got into the taxi trade because work was hard to come by.

“I wasn’t the type who was good at studying and studied up to only Secondary 3. Times were also not very good then,” he recounted.

On the economic front, much of the Western world experienced a recession between 1973 and 1975 and, in Singapore, labour-intensive industries also saw a decline, as the nation evolved towards higher-value manufacturing, such as in electronics, in the late 1970s and early 1980s.

Mr Lim bounced between various menial odd jobs in the 1970s, working in a power station and a chemical factory, and as a parking attendant.

“I remember my eyes watering because of the ammonia fumes at the factory, and I lasted only two days,” he said.

Wages were meagre too, he said – about $8 a day at the power station, for example.

A career change was in order. But getting into the taxi trade was not easy because of the limited number of cabs then, Mr Lim recalled.

The NTUC Comfort taxi cooperative – which later become ComfortDelGro – had a fleet of just 5000 in 1980. There was a wait-list which reports said swelled to about 2400 applicants in 1986.

The other major players were yellow-top cabs, which were individually licensed.

In the 1960s, they numbered about 3800 but, a decade later, the Government stopped giving out taxi licences to individuals. In comparison, there are 26,000 taxis run by five companies here today.

Mr Lim started out by being a relief driver for his older brother Chwee Poh, who operated a Nissan Cedric cab under NTUC Comfort.

“If you were willing to work hard, you could make about $30 a day. But you had to keep driving around to find customers,” he said, adding that only the more well-to-do commuters took taxis.

With NTUC Comfort, there was also the opportunity to eventually own the taxi – an arrangement which Mr Lim said was preferable to the present renter-hirer model.

Under the cooperative’s Vehicle Ownership Scheme, cabbies could collect a new cab by making a deposit of $500.

The taxi driver would then pay NTUC Comfort a weekly amount to cover the vehicle rental fees, administrative costs and insurance coverage. After about four years, the cabbies would become proud owners of their vehicles. The taxis would last these drivers seven years before they had to be scrapped.

Mr Lim said he could not remember how much the weekly fee was, but reports at that time said it was around $160. The ownership scheme, however, was phased out when NTUC Comfort became corporatised in 1993.

From the 1990s, Mr Lim became a hirer, renting taxis from CityCab, Trans-Cab and SMRT at different stages of his career.

In 2014, he was introduced by a fellow cabby to the GrabTaxi app, later renamed as Grab.

“I needed help to download the app into my mobile phone but, after being shown the steps, I found it quite easy to use. With the app, I do not have to drive about to find passengers, so it’s less tiring,” he added.

He said he could pick up as many as 10 GrabTaxi bookings a day.

But the bonanza was short-lived, Mr Lim said, as demand from customers shifted from taxis to private-hire cars.

In 2015, Grab launched GrabCar, joining Uber in offering privately chauffeured cars which were cheaper than cabs.

Going with the flow, he made the move to Grab last year.

Looking back, Mr Lim said he has had “no regrets” being in the taxi industry as it helped raise his family, with two daughters born in 1988 and 1989.

He declined to talk about his wife, whom he divorced in 2013.

Mr Lim turned 72 on Aug 9, which is also Singapore’s National Day. Asked if this held any meaning for him, Mr Lim said no.

Until this year, he had never taken a day off on his birthday.

“I still have to drive to cover my daily rental fees,” he said.

“But this year, I took a break.

“My daughters took me out for a meal,” he added with a smile.