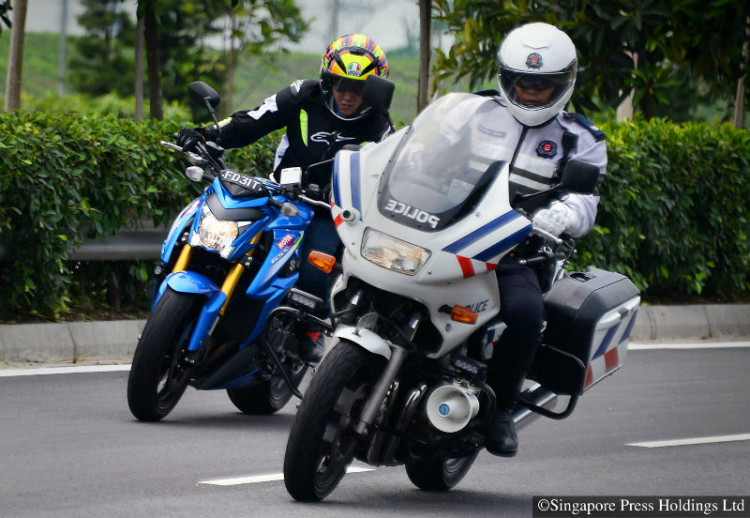 I got to see at first hand what ASP Firdous’ job entails.

And today, I’m sure traffic cops aren’t ninjas who don invisibility cloaks while on patrol.

I say this after hearing a number of motorists claim they were ambushed by traffic cops “who came out of nowhere” – perhaps suggesting traffic cops ride in other vehicles’ blind spots.

ASP Firdous laughs at this notion, describing it as “definitely not a fact”.

“We do not ride in blind spots and we do not condone riding in them,” says the officer, who rides a 900cc Yamaha police bike.

“On duty, we are most visible because of the size of our bikes and the white jackets we wear.

“Logically, the tendency to spot us is higher. Besides, we want to make ourselves as visible as possible,” he adds.

On my half-day patrol experience, I saw motorists who drove and rode as if they were wearing blinkers.

So what does he look for on patrol?

ASP Firdous, who has been with TP for two years, says: “The traffic police officer must look out for potential violators who might pose a danger to others. He will be looking out for traffic directly around him.”

Of course, the officer’s personal safety is equally important.

Some things naturally stand out, such as a motorist travelling faster than the flow of traffic or motorists who suddenly encroach into another motorist’s lane.

Less obvious are drivers who don’t wear seat belts or are talking on mobile phones.

ASP Firdous attributes his “spotting” skills to being able to “look far” and “look through a vehicle”.

PRACTICE
With practice, motorists can also use these skills to their advantage.

ASP Firdous says: “If the motorists practise the habit of preempting oncoming traffic, then they will have a defensive driving habit.”

He stresses TP’s approach to road safety is a holistic one. The strategy involves engaging, advising and educating motorists.

But traffic cops will not hesitate to mete out summonses for dangerous motoring habits or infringements when necessary.

There are signs of drink driving awareness getting through.

He adds: “The occurrences of meeting a valet driver is actually higher at night at our road blocks. It’s becoming a common sight and a very encouraging sign for us.”

So are we safer riders on the roads?

Figures show motorcycle-related fatalities declined from 50 in the first six months of 2014 to 37 in the same period in 2015.

But the number of motorbike-related injuries in the same six-month period rose from 1953 in 2014 to 2107 last year.

The main reasons for motorbike accidents when riders are at fault include failing to keep a proper lookout, failing to have proper control of their motorcycles and failing to give way to traffic with the right of way.

ASP Firdous says: “The bikers’ knowledge is apparent when you engage them. They are aware of proper riding attire and manners.”

Still, some peculiar trends need to be ironed out – the use of bald tyres and motorcycles without mirrors or mirrors folded inwards should be discouraged.

“They tend to remove their mirrors or fold them in simply to squeeze through traffic. When we see this, we will safely escort the biker in the fastest way possible to the side of the road,” says ASP Firdous.