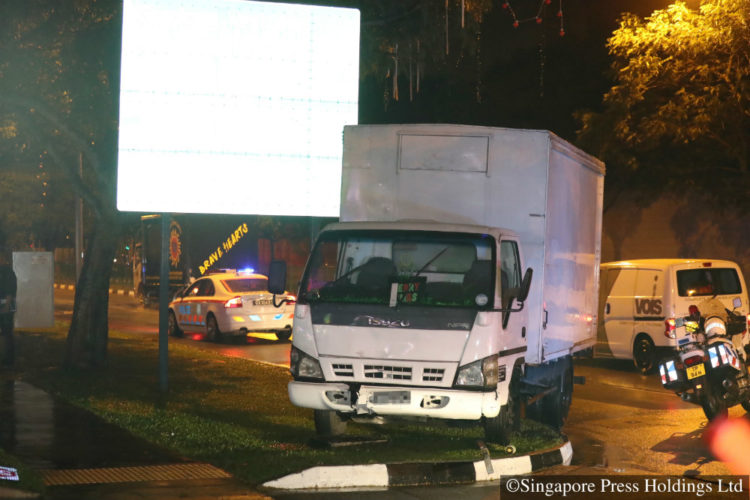 A 16-year-old boy drove a lorry into a gas utility box in Jalan Kayu on Christmas evening, causing fumes to leak. He is believed to have stolen the lorry and driven it into the gas regulator box near Block 447A, Jalan Kayu, at 6.20pm.

A 16-year-old boy drove a lorry into a gas box in Jalan Kayu on Christmas evening, damaging the box and causing fumes to leak.

He is believed to have stolen the lorry and driven it into the gas regulator box near Block 447A, Jalan Kayu, at 6.20pm.

He was the only one injured in the accident, the police told The Straits Times on Tuesday (Dec 26).

The accident occurred during the dinner peak hours, when a nearby coffee shop was full of diners, an eyewitness told Lianhe Wanbao in a report on Tuesday.

The 66-year-old, who gave his name as Mr Huang, told the evening daily that he was eating at the coffee shop when he heard a loud bang.

“The lorry hit the box, then reversed and hit the divider before rushing onto the grass. It all happened very quickly and was very shocking,” he said.

The 16-year-old, who did not have a valid driving licence, has been arrested for driving a vehicle without the owner’s consent, the police said.

Fumes from the gas regulator box leaked into the air after it was damaged.

SCDF deployed two water jets to disperse the vapours and a nearby coffee shop was evacuated as a precautionary measure.

An SP Group spokesman told ST that the box that was damaged was a low pressure gas regulator overground box.

“Our officers were immediately deployed to the area and our priority was to ensure the safety of everyone in the vicinity,” said the spokesman. “As a precautionary measure, gas supply to the box was shut.”

He added that there was no gas supply interruption to the surrounding area, which taps on other supply lines.