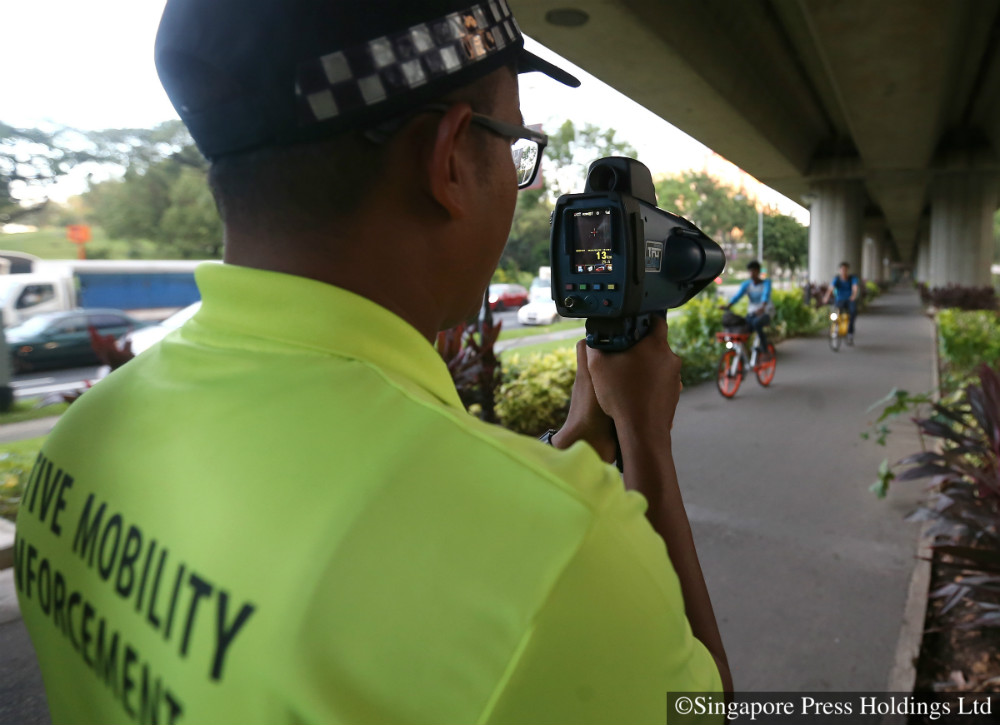 An active mobility enforcement officer using a speed gun to spot speeding cyclists and PMD users during the enforcement blitz on 2 May 2018.

The Active Mobility Act took effect on Tuesday, giving the authorities more teeth to deal with reckless users of personal mobility devices (PMDs), along with errant cyclists. Under the Act, those who ride dangerously on paths or use non-compliant devices can face fines or even jail time.

The tougher enforcement powers granted to the authorities should bring down the rate of accidents involving PMDs, which number about three a week. This is based on the 110 cases recorded between January and September last year.

As of Tuesday, the Land Transport Authority (LTA) has equipped its enforcement officers with speed guns. The authorities can now also pull over PMD users to have their devices weighed, measured and inspected. Those which are non-compliant – exceeding the weight limit of 20kg or width of 700mm and travelling at a speed above 25kmh – will be seized on the spot. This is crucial as devices which are fast and heavy could inflict more severe injuries on their riders and the people they collide into.

The tough enforcement and stiff penalties should serve as a deterrent against reckless behaviour and protect vulnerable groups like elderly pedestrians and children.

Enforcement is one piece of the puzzle. Education and engagement are critical too, and LTA – which launched its Safe Riding Programme earlier this year in schools, community clubs and foreign worker dormitories – should raise awareness of safe riding.

However, the laws need to evolve as the use of PMDs and bicycles proliferates. The Active Mobility Advisory Panel, which was formed in 2015, is currently reviewing the rules it devised two years ago.

A version of this article appeared in the print edition of The Straits Times on May 05, 2018, with the headline “Safer paths with new law in force”.